The inaugural session of the seventh edition of the India Smart Utility Week (ISUW), organised by the India Smart Grid Forum (ISGF), began with a welcome address by Reji Kumar Pillai, president, ISGF. He extended a warm welcome to all delegates, speakers, dignitaries, exhibitors, sponsors and the media. He highlighted the various initiatives being taken by the ISGF, including peer-to-peer trading of solar energy by customers with rooftop solar in Lucknow City, Uttar Pradesh. He also highlighted that during the lockdown, ISGF trained over 1,000 persons globally from utilities, industry and academia on various subjects through their digital platform. Another recent achievement of ISGF is the implementation of time-of-use tariff on a trial basis in Gujarat.

Tripathy began the session by highlighting that the ISA is working towards the target of mobilising more than $1,000 billion of solar investments. He noted that under the Prime Minister’s One Sun One World One Grid (OSOWOG) initiative, smart grids and smart technologies are the pillars of this new idea. The initiative will help realise the transition of energy development. He added that this would require a focus on building regulatory systems and capacity building initiatives. He concluded that in the next 10 years, the market will decide in favour of the sun.

Schaumberg began his remarks by stating that the world’s collective challenge is food energy and water security. Further, increasing customer expectations and cybersecurity are fast becoming incredibly important challenges. He added that a strong smart metering infrastructure is not only important for flexibility, but is an enabler for realising the full value of decentralisation and digitalisation. The lesson for the world is that Covid-19 recovery efforts must focus on building better grids, and that green energy is the ticket to growth and prosperity. 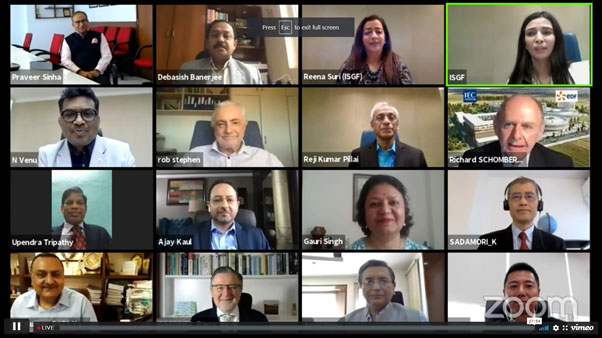 Kaul stated that the energy industry is undergoing a major transformation and utilities are adapting to these new changes. The 250 million plus smart meter initiative is a good example of the transformation in the power distribution segment. Further, the Jal Jeevan Mission of the government will see the implementation of IoT devices, AI and ML technologies to ensure uninterrupted services. According to him, a big challenge is that only 2-3 per cent of data today is being utilised for analysis. Another challenge is the ageing infrastructure of utilities. According to him, the three disruptive trends driving customer centricity are decentralisation, decarbonisation and digitalisation.

According to Venu, a carbon neutral future is electric, and electricity shall be the backbone of the entire energy system. He commented that the pandemic has given an impetus to the energy transition. Further, electrical interconnections are fundamental for local, regional and global energy exchanges as they enable a carbon-neutral power system. He added that the recent Texas incident has highlighted the vulnerabilities of power systems and reinforced the need to make the grid stronger and smarter.

Banerjee highlighted that the technology preparations done in advance by CESC, such as leveraging innovative technologies and digitalisation, have helped the company immensely. It has also adopted digital technologies such as sensors, SCADA, O&M gangs, along with HT command centres and low voltage command centres, which help us locate faults and restore power much faster. He mentioned that the company is also able to optimise capex costs and customer efficiency through workforce automation and digitalisation.

Sinha highlighted that despite several policy initiatives, automation and smart grids are yet to reach all utilities in the country. Hence, steps need to be taken by policymakers, regulators, technology providers and utilities to implement these. He added that with the government planning to amend the Electricity Act and introduce delicensing, private players will get an opportunity to showcase their best practices for the sector. Also, rooftop solar, solar pumps and microgrids are yet to see greater penetration. It will be necessary to use smart grid technologies. He added that smart grid technology in our country is just the tip of the iceberg, with a whole lot of benefits yet to happen.

Astuto mentioned that EU and India have started to strengthen their energy and climate partnerships to achieve the Paris target commitments. He added that smart grids are a crucial part of this cooperation and the EU-India partnership is focusing on the exchange of knowledge through workshops, studies and replicate successful projects. Also, clean energy transition will be at the centre of the climate agenda.

According to Amal Sinha, the role of distribution automation in decarbonisation is being increasingly realised. Since its inception, BRPL has been continuously working on operational efficiency by reducing losses to less than 8 per cent through multiple technology interventions and consumer-focused delivery. It has embarked on a digital transformation journey and is implementing several key initiatives like the BRPL Solar City initiative (for energising 2,500 solar rooftop connections) and India’s first Behavioural Energy Efficiency Program, being implemented in partnership with Oracle.

Kumar commented that using cutting-edge technologies and innovation, BYPL has achieved the highest loss level reduction in the country to a sub-8 per cent level. Further, reliability has improved to 99.9 per cent. The decarbonisation of economies can also be accelerated with the use of technology. However, capacity building for technology usage is very important.

According to Gauri Singh, as per IRENA’s analysis, for achieving a reduction in energy emissions to ensure a temperature rise remains below 2 degree centigrade, investments in renewable energy will need to be trebled from around $1 billion every year currently. She added that every dollar that gets invested in energy transition has the potential to generate a return of $3-$8. Further, investments in energy transition will create 22 million new jobs in the energy transition field. This is a very exciting time for renewable energy in the country and with larger shares of variable power, smart grids will be extremely critical.

According to Stephen, various grid models are now coming up. While bulk transmission will still be continued for transporting renewable energy from load centres, a large number of small decentralised and integrated networks will also be there. With smart grid technologies, we can operate and maintain these successfully, he comments. He mentioned that work done by India can be an example and can be followed by the rest of the world.

According to Sadamori, the IEA and India are working under a strategic partnership to strengthen their collaboration across a range of vital areas including energy security and clean energy. In recent years, India has brought electricity connections to hundreds of millions of citizens; promoted the adoption of highly-efficient LED lighting by most households; and led a massive expansion of renewable energy sources driven by solar power. Sadamori highlighted the need to revise and create new policies and ensure a suitable regulatory environment, leverage investments and develop new markets. Greater levels of investment and deployment of smart technologies are also needed.

According to Kaku, Japan has an ambitious target to achieve carbon neutrality by 2050. For this, a $20 billion fund has been granted to NEDO by MEITI to implement innovative technologies. He added that India is an important partner country for Japan.

According to Dunlop, the switch from fossil fuels to renewable energy has to be done extremely fast and it would not be possible to do that without sharing RE resources and linking up resources over the world. At current emission levels of CO2, we have seven years left, he noted. Further, India’s Green energy corridor initiative should be replicated all over the world. He concluded thatgreater political force would be needed all over the world in pushing towards this.

According to Gardiner, the pandemic has shown that transformative changes are necessary. He lauded the various initiatives taken by the power minister in India, from introducing penalties to discoms for not meeting standards to setting India on a growth path towards achieving the Paris targets of not 40 per cent but 60 per cent. Further, the budget allocation of 30 billion pounds to the power sector to strengthen the sector and introduce competition is welcome as are other announcements like green hydrogen and capital infusion in SECI. Further, the OSOWOG initiative will help ensure that the world comes together for a global green grid, he concluded.

The session concluded with a vote of thanks by Reena Suri, executive director, ISGF.