The Ministry of Power (MoP) has issued the Electricity Late Payment Surcharge (LPS) Rules, 2021. LPS refers to the charges payable by a distribution company to a generating company or electricity trader for power procured from the latter, or by a user of a transmission system to a transmission licensee on account of a delay in the payment of monthly charges. With the new rules, the central government has lowered the LPS levied by power and transmission developers on discoms by linking it to the State Bank of India’s (SBI) lending rate. The rules have been notified in view of the prevailing low rates of interest so that the rates of LPS accurately reflect the current cost of borrowing. In the current scenario, this would imply reducing LPS to 12-15 per cent per annum, according to analysts.

To recall, last year, a number of measures were announced by the government to mitigate the adverse impact of the pandemic on discoms, including a Rs 1.2 trillion liquidity injection scheme, rebates on capacity charges, and relaxation of letter of credit provisions for scheduling of power. In August 2020, the MoP advised all power generating companies and transmission companies to cap the LPS from distribution utilities at a rate not exceeding 12 per cent per annum for all payments made under the Atmanirbhar Bharat Abhiyan’s liquidity infusion scheme in view of the financial burden on discoms during the Covid-19 pandemic. The draft LPS Rules were subsequently issued in October 2020. The MoP had noted at the time that the applicable rates of LPS were quite high, going up to 18 per cent in many cases, despite the fact that interest rates in the country had softened over the past few years, and that this was adversely impacting discoms. 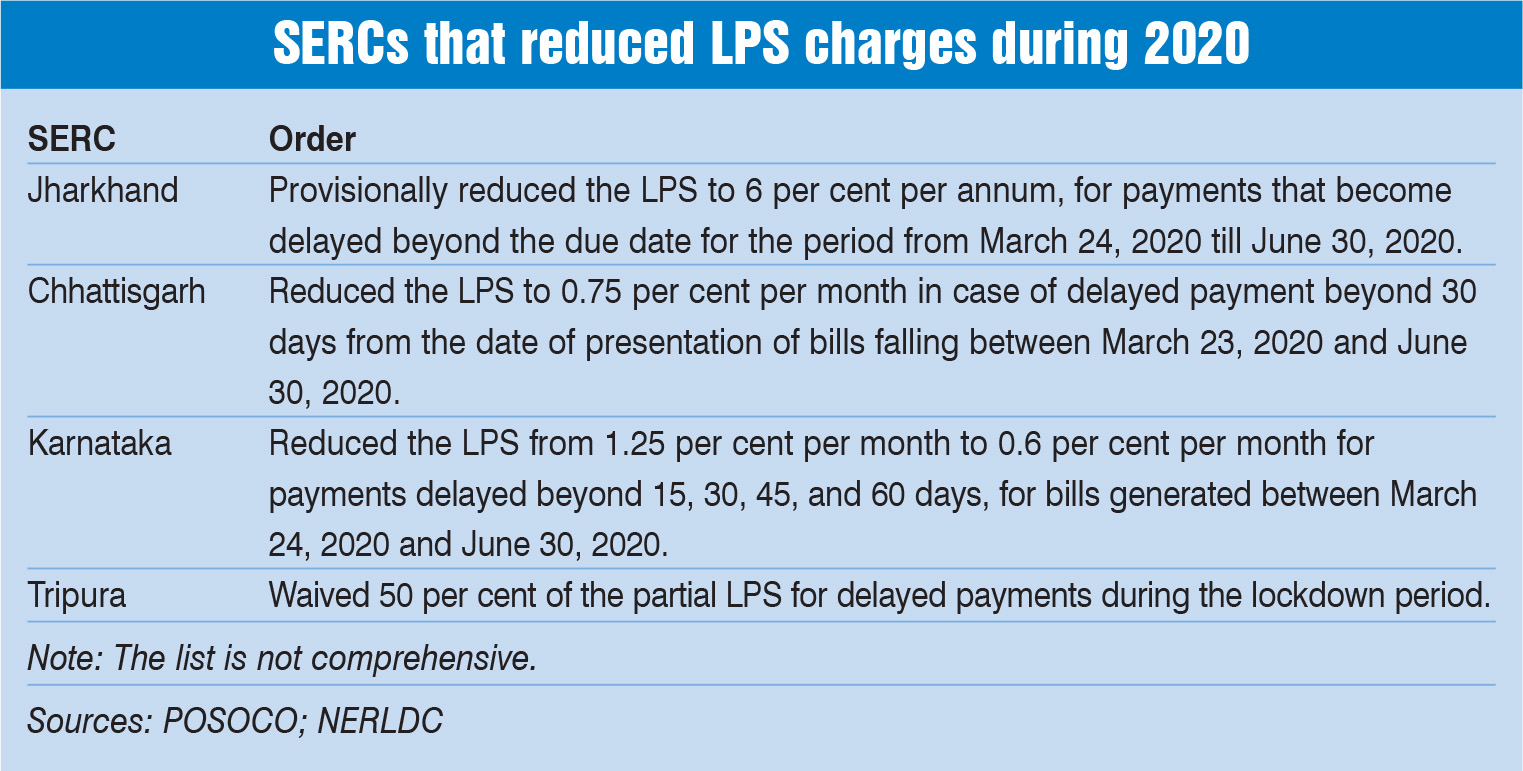 The new notified rules will be applicable to power purchase agreements, power supply agreements and transmission service agreements in which the tariffs have been determined through competitive bidding. The rules specify that the LPS will be payable on the outstanding amount after the due date at the base rate for the first month of default. The base rate is equivalent to the marginal cost of SBI’s funds-based lending rate for one year as applicable on April 1 of the financial year in which the period lies, plus 5 per cent; and in the absence of a marginal cost of funds-based lending rate, to any arrangement that substitutes it. The LPS rate for the successive months will increase by 0.5 per cent for every month of delay. The surcharge should not be higher than 3 per cent of the base rate at any time. The rule will be applicable only when the rate of LPS payable is not higher than the rate specified in the agreement for the purchase or transmission of power. Further, if a distribution licensee has any payment, including LPS, outstanding against a bill after seven months have passed from the due date of the bill, the licensee will be debarred from procuring power from a power exchange as well as from grant of short-term open access until the amount is paid. Moreover, if the period of default falls across two or more financial years, the base rate of the LPS will be calculated separately. According to the new rules, all payments by a distribution licensee to a generating company or to a trading licensee for power procured from it, or by a user of a transmission system to a transmission licensee, will be first adjusted towards LPS and thereafter towards monthly charges, starting from the longest overdue bill.

The move is aimed at reducing the financial burden of the already stressed discoms and at improving liquidity by reducing the interest rate on late payments by discoms, from the existing rate of up to 18 per cent to around 13.15 per cent, which is SBI’s base lending rate of 8.15 per cent as on April 1, 2020, plus 5 per cent. Further, it aims to reduce the mounting discom dues to power producers, which is a key concern for investors. The discoms’ outstanding dues have risen by 24 per cent to reach Rs 1,369.66 billion in December 2020 from Rs 1,106.6 billion in December 2019, according to the PRAAPTI portal.

That said, analysts note that the move does not guarantee that discoms will pay their dues on time. Also, it could impact power generators that are already experiencing late payments and will now have to lose out on interest payments for the delayed amount. However, the move will still be beneficial for the discoms, as it will reduce their financial burden, going forward.