When it comes to channelling the carbon-neutral power of offshore wind, the US is far behind other industrialised nations such as China and Germany. So far, the US has only two operational offshore wind installations, off the coasts of Rhode Island and Virginia. The biggest, Block Island Wind, off Rhode Island, features only four turbines that were a struggle to install, despite huge subsidies. For nearly a decade, the federal government has been auctioning off windy stretches of the Atlantic for development, and the approvals have taken years. But if the offshore wind targets of the comprehensive infrastructure plan that the Biden administration recently unveiled are implemented, all this is set to change.

On March 29, 2021, President Joe Biden announced big plans to expand offshore wind power, with 30 GW planned along the US coasts by 2030, backed by billions in federal loan guarantees. According to the US Department of Energy (DOE), this move could potentially power 10 million homes in the future and avoid 78 million metric tonnes of carbon dioxide emissions. The 30 GW target will spur $12 billion in capital investment annually, leading to the construction of up to 10 new manufacturing plants for offshore wind turbine components, new ships to install offshore wind turbines, and up to $500 million in port upgrades.

The announcement is based on the president’s belief that a thriving offshore wind industry will drive new jobs and economic opportunity up and down the Atlantic coast in the Gulf of Mexico, and in the Pacific waters. In parallel, the industry will spawn new supply chains that stretch into the country’s heartland, as exhibited by the 10,000 tonnes of domestic steel that workers in Alabama and West Virginia are supplying to a Texas shipyard where power and energy company Dominion Energy is building the nation’s first Jones Act-compliant wind turbine installation vessel.

Here are the key takeaways from the announcement…

The Interior Department’s Bureau of Ocean Energy Management (BOEM) has announced a new priority Wind Energy Area in the New York Bight – an area of shallow waters between Long Island and the New Jersey coast – a first step before issuing new leases to wind developers. This new Wind Energy Area is adjacent to the greater metropolitan Tri-State area – the largest metropolitan population centre in the US, which is home to more than 20 million people. New York and New Jersey have committed to procuring a combined 16,500 MW of new offshore wind power by 2035 to help meet their targets for cutting global warming emissions.

In addition, New York City has committed to achieving 100 per cent zero-emission energy by 2040. And for the past 45 or so years, New York City has partially relied on nuclear energy, which, despite safety and waste concerns, is carbon-free. But the nuclear plant at Indian Point in nearby Westchester County is ageing and its two reactors would pose considerable risks in the unlikely event of a major accident. According to reports, one old reactor has already been shut down and the other is expected to stop operating in late 2021. Their departure from the grid will leave New York short of the carbon-free electricity it needs to meet its goals.

In this background, the Biden plan calls for 9 GW of wind power in the New York-New Jersey Bight. Such a plan has been drafted for New York because although it has great wind resources, the area faces difficulty in getting clean energy because there is a dearth of space onshore, leaving offshore as the best way to get clean energy into the dense urban environment that is the New York metropolitan region. 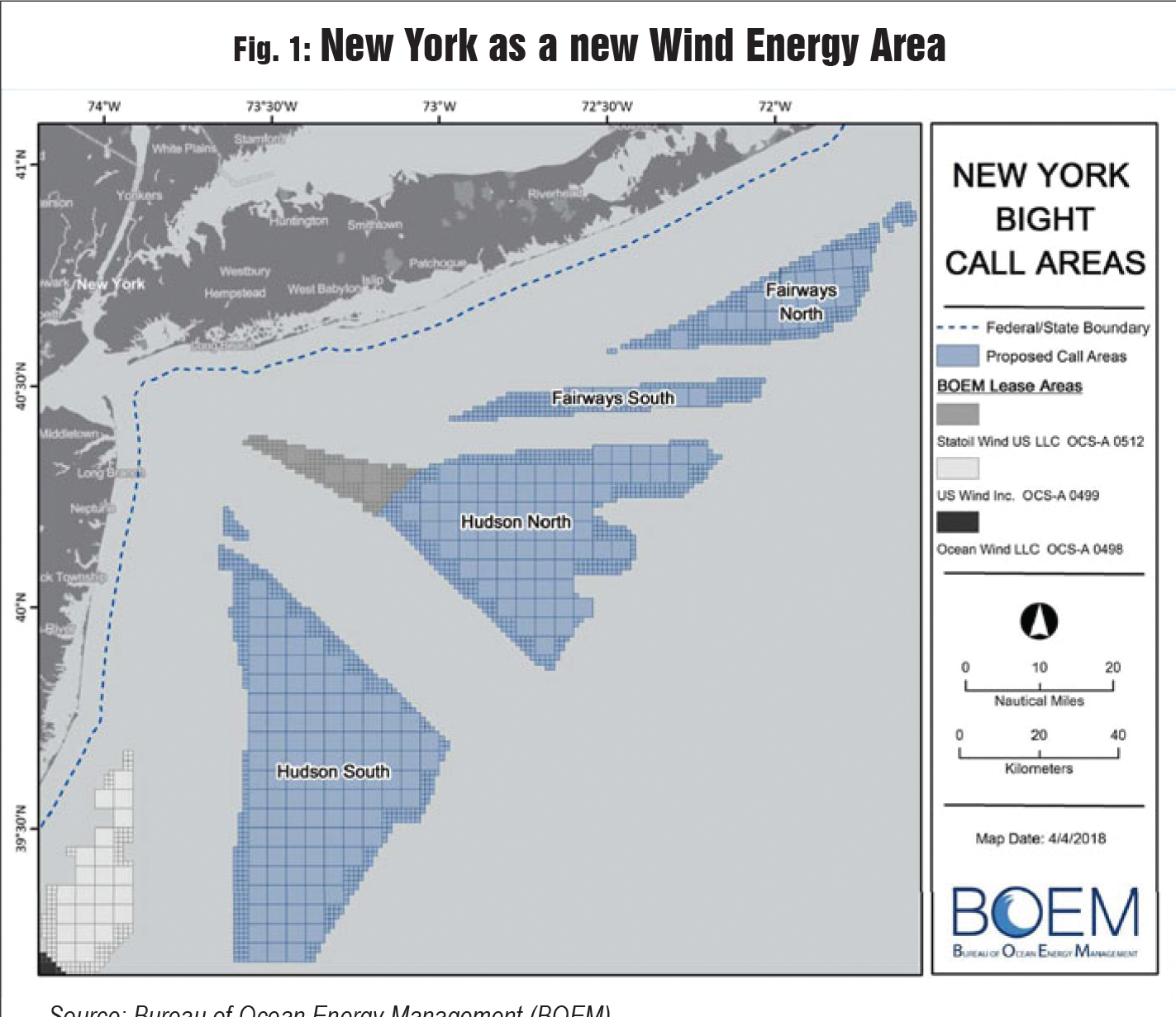 The customer base for offshore sources has started to grow. According to the American Clean Power Association, some of the biggest states in the Northeast and mid-Atlantic regions – including Connecticut, Maryland, Massachusetts, New Jersey, New York and Virginia – have committed to buy more than 25,000 MW of offshore wind power by 2035. Each of these states has set aggressive goals to source more electricity from renewable sources such as wind and solar in order to help address climate change.

In this scenario, the DOE’s Loan Programs Office (LPO) released a fact sheet to facilitate access to $3 billion in funding for the offshore wind industry through their LPO’s Title XVII Innovative Energy Loan Guarantee Program. The fact sheet signals that the LPO is open for business and ready to partner with offshore wind and offshore transmission developers, suppliers, and other financing partners in order to scale the US offshore industry and support well-paying jobs. To date, the LPO has provided $1.6 billion in support of projects totalling about 1,000 MW of onshore wind.

Economic impact of the announcement

The announcement, aimed at boosting offshore wind in the US, comes as President Biden prepares a roughly $3 trillion economic recovery package that will focus heavily on infrastructure to reduce greenhouse gas emissions and tackle climate change, an effort he has framed as a jobs initiative. According to the US Department of the Interior (DOI), meeting this target will trigger more than $12 billion per year in capital investment for projects on both US coasts, and create tens of thousands of well-paying union jobs, with more than 44,000 workers employed in offshore wind by 2030 and nearly 33,000 additional jobs in communities supported by offshore wind activity. In addition, achieving this target will unlock a pathway to the target of 110 GW by 2050, generating 77,000 offshore wind jobs and more than 57,000 additional jobs in communities supported by offshore wind activity – all while creating further economic opportunities and ensuring that future generations have access to clean air and abundant renewable power.

The National Offshore Wind Research and Development Consortium, created by the DOE and the New York State Energy Research and Development Authority, is set to announce the award of $8 million to 15 offshore wind research and development projects that were selected through a competitive process. The new projects will focus on offshore support structure innovation, supply chain development, electrical systems innovation, and mitigation of use conflicts, which will help reduce barriers and costs for offshore wind deployment.

Along with this, the Department of Commerce’s National Oceanic and Atmospheric Administration (NOAA) is signing a memorandum of agreement with Ørsted, the Danish offshore wind development company, to share physical and biological data in Ørsted-leased waters subject to US jurisdiction. This agreement is the first of its kind between an offshore wind developer and the NOAA, and paves the way for future data sharing agreements that the NOAA expects to enter into with other developers.

According to the NOAA, data supplied by Ørsted and other companies will contribute significantly to ocean science, particularly in the areas of ocean mapping and observation, thus serving the NOAA’s mission to advance climate adaptation and mitigation, weather-readiness, healthy oceans, and resilient coastal communities and economies.

In addition, the NOAA’s Northeast Sea Grant programmes, in partnership with the DOE, DOC and the NOAA’s Northeast Fisheries Science Center, are sending out a request for research proposals to support more than $1 million in grant funding to improve the understanding of offshore renewable energy for the benefit of a diversity of stakeholders, including fishing and coastal communities. The grant funding is aimed at supporting objective community-based research in the Northeast in order to improve the understanding of the effects of offshore renewable energy on the ocean and local communities and economies, as well as opportunities to optimise ocean co-use.

To help meet its target, the Biden Administration is expected to accelerate the approval of projects off the Atlantic coast and prepare to open up the waters near New York and New Jersey for development. In line with this, the BOEM has already announced a notice of intent to prepare an environmental impact statement for Ocean Wind, putting it in line to become America’s third commercial-scale offshore wind project. Ocean Wind is a proposed offshore wind project with a capacity of 1,100 MW – enough to power 500,000 homes across New Jersey. In addition, the BOEM has announced environmental reviews for Vineyard Wind, MA and South Fork, RI, and is expected to initiate environmental reviews for up to 10 additional projects in the latter half of 2021.

The Biden Administration is taking aggressive actions that focus on creating jobs and addressing climate change simultaneously. This latest announcement, which is in line with the aforementioned idea, is also expected to stimulate critical investment in the nation’s transmission facilities, ports and other infrastructure, which, in turn, will build the resilience and sustainability of the US economy.