Over the past couple of years, upgrading metering infrastructure with the adoption of smart meters has been one of the key focus areas of distribution utilities. Smart meters can improve the operational and financial performance of discoms by automatically generating bills, preventing delayed payments through the remote disconnection feature, and reducing aggregate technical and commercial losses, among other things.

Smart metering is a key component of various government programmes like the Integrated Power Development Scheme (IPDS), the National Smart Grid Mission (NSGM), the Smart Metering National Programme (SMNP), and the Ujwal Discom Assurance Yojana (UDAY). So far, a total of 2.38 million smart meters have been installed in the country. State-wise, the highest number of smart meters have been installed in Uttar Pradesh (1,147,938), followed by Haryana (266,869). The deployment of 7.55 million smart meters is currently under way across states.

Energy Efficiency Services Limited (EESL) is spearheading the smart metering drive with an ambitious target of replacing 250 million conventional meters with smart meters under the SMNP. EESL is engaged in the installation of 80 per cent of the 12 million smart meters under implementation across the country. As of April 2021, the installation of around 1.58 million smart meters has been completed. As a result, the average discom revenues increased by 20.5 per cent, amounting to Rs 301 per month per meter. In addition, the aggregate technical and commercial (AT&C) losses reduced to 11-36 per cent on an average while billing efficiency increased by 21 per cent.

Smart metering projects have been also approved by the MoP under the IPDS on the basis of improvement in performance parameters under UDAY. The total outlay for the projects is Rs 8.34 billion. The states have made detailed project reports based on the capex model or a combination of the capex and revenue recovery models. IPDS funding will be admissible only for the capex portion (the cost of smart meters, head-end system and communication equipment), limited to a maximum of Rs 2,000 per node. For smart metering infrastructure under the IPDS, a government grant of Rs 2.39 billion has been approved. Of this, Rs 368 million has been released across the states of Bihar, Madhya Pradesh, Punjab and Rajasthan. 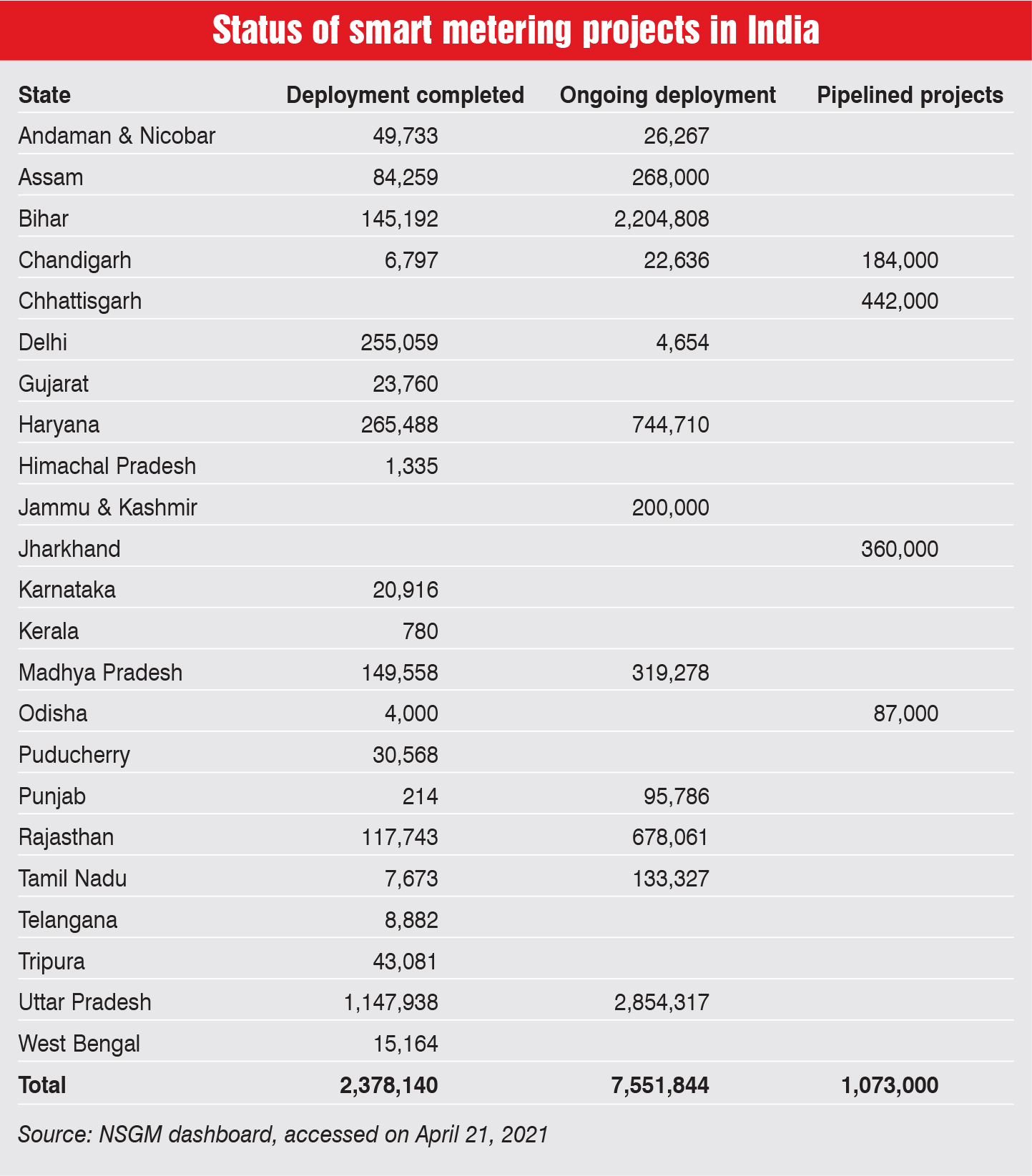 In order to accelerate smart meter deployment in the country, the MoP is working to set up a Rs 20 billion JV for providing a common back-end infrastructure facility (CBIF). The JV will be promoted by four central PSUs – NTPC Limited, REC Limited, Power Grid Corporation of India Limited (Powergrid) and the Power Finance Corporation (PFC). While PFC and REC have approved an equity investment of Rs 1.5 billion each in the JV, NTPC and Powergrid are yet to do so. The CBIF will simplify smart meter roll-outs for discoms by offering a plug-and-play architecture with a standardised, preconfigured, pre-integrated, scalable back-end infrastructure. It will also enable a centralised management information system or reporting of metering data. The facility will be offered to discoms on a software- or solutions-as-a-service approach, with only usage fees being charged.

In April 2021, EDF, a French power utility firm, completed the installation of 100,000 smart meters in India under a contract with EESL. This is the first large-scale prepaid smart meter deployment in India. It marks the beginning of the commercial roll-out of 5 million smart meters across India, nearly half of which will be installed in the state of Bihar. The contract was awarded to EDF in association with Accenture Solutions Private Limited (India) in 2019. It covers AMI design, proper installation of 5 million smart meters across India, integration of smart meters with the existing billing system of electricity distribution companies, and operations and maintenance of the whole system for a period of six and half years.

In another development, the Asian Development Bank has signed a $132.8 million loan agreement with the central government for strengthening and modernising the distribution network in Meghalaya, including the installation of smart meters in about 180,000 households.

Smart meters are not just hardware components. They require an entire infrastructure. An important issue faced during the implementation of smart meters is that all associated processes, from meter reading to billing and payment have to be automated. Currently, utilities have these processes on separate platforms and it is a challenge to bring these on to a single standard platform. These challenges can be overcome with the use of right technologies. Given how smart meters have especially benefited utilities during the pandemic crisis, when physical meter reading and billing has not been possible due to the lockdown, the central government has decided to switch to smart prepaid meters over the next three years.

Under the Union Budget 2021-22, the finance minister has announced a Rs 3 trillion reforms-linked scheme for five years for the power distribution segment. Of this, Rs 1.5 trillion has been provisioned for smart metering. This is likely to provide a shot in the arm for smart prepaid meter deployment in the country. That said, in order to accelerate the adoption of smart meters, there is a need to address issues pertaining to interoperability, integration of the legacy billing system, and manpower training. Besides, given the growing interconnectedness and access to granular power consumption data, maintaining data privacy and ensuring cybersecurity are paramount.