The pilot security constrained economic despatch (SCED) has helped gain experience in the scope of optimisation at the interstate generating station (ISGS) level and has proved to be an important tool in optimising available resources in the power system to reduce cost. From the start of the SCED pilot in April 2019, up to January 2021, a total reduction of Rs 16.24 billion in variable cost of generation has been achieved. The implementation of the extended and expanded pilot SCED was allowed by the Central Electricity Regulatory Commission (CERC), in April 2020 till March 31, 2021 and has now been extended up to September 2021. During the period of the expanded pilot, the SCED application was further developed – generating stations with partly tied-up capacity and merchant generators were included, real-time market (RTM) was operationalised, entailing changes in scheduling timelines, and look-ahead SCED and security constrained unit commitment (SCUC) were formulated. In March 2021, Power System Operation Corporation Limited (POSOCO) released a comprehensive report on the pilot experience and feedback on activities during the extended and expanded pilot. Power Line presents a brief overview of POSOCO’s detailed feedback report on the expanded pilot on SCED for ISGSs…

SCED development and operation in 2020

New features in the SCED: During the period of the expanded pilot, the SCED application was further developed and generating stations with part tied-up capacity and also merchant generators were included. The RTM was operationalised, which led to changes in scheduling timelines. The new scheduling timelines came into vogue with the gate closure for declared capacity (DC) and requisition revisions getting shifted from fourth time block to seventh or eighth time block before the despatch block. With the growth in renewables, interregional flow patterns are undergoing a seasonal and diurnal shift. In view of this shift, the SCED software has been modified to incorporate import as well as export available transfer capability constraints on interregional schedules for all regions. Apart from this, scheduled and emergency stop and evacuation limit features have been added in the SCED.

Impact of Covid-19: The pan-India lockdown for containment of the Covid-19 pandemic from March 25, 2020 onwards had an impact with demand reduction of up to 25-30 per cent. A significant portion of generation capacity went under reserve shutdown. There was a corresponding reduction in DC on-bar and net schedule of SCED participating generators. There was also an impact on the SCED system marginal price due to demand reduction.

Reduction in costs: During 2020 (Jan-Dec), the total reduction in variable cost of generation due to the SCED was Rs 7.52 billion. From the start of the SCED pilot in April 2019 up to January 2021, the cumulative cost reduction was Rs 16.24 billion. It is observed that the daily SCED savings reduced towards the second half of 2020. Part of this reduction could be due to reduced perturbation (increment and decrement of generation). It can be seen that the perturbation reduced significantly in December 2020 as compared to that in the previous year. The corresponding cost reduction during December 2019 and December 2020 was Rs 680 million and Rs 280 million respectively. The reduction in the diversity of variable charges in the SCED merit order stack could be another contributor to reduced savings. 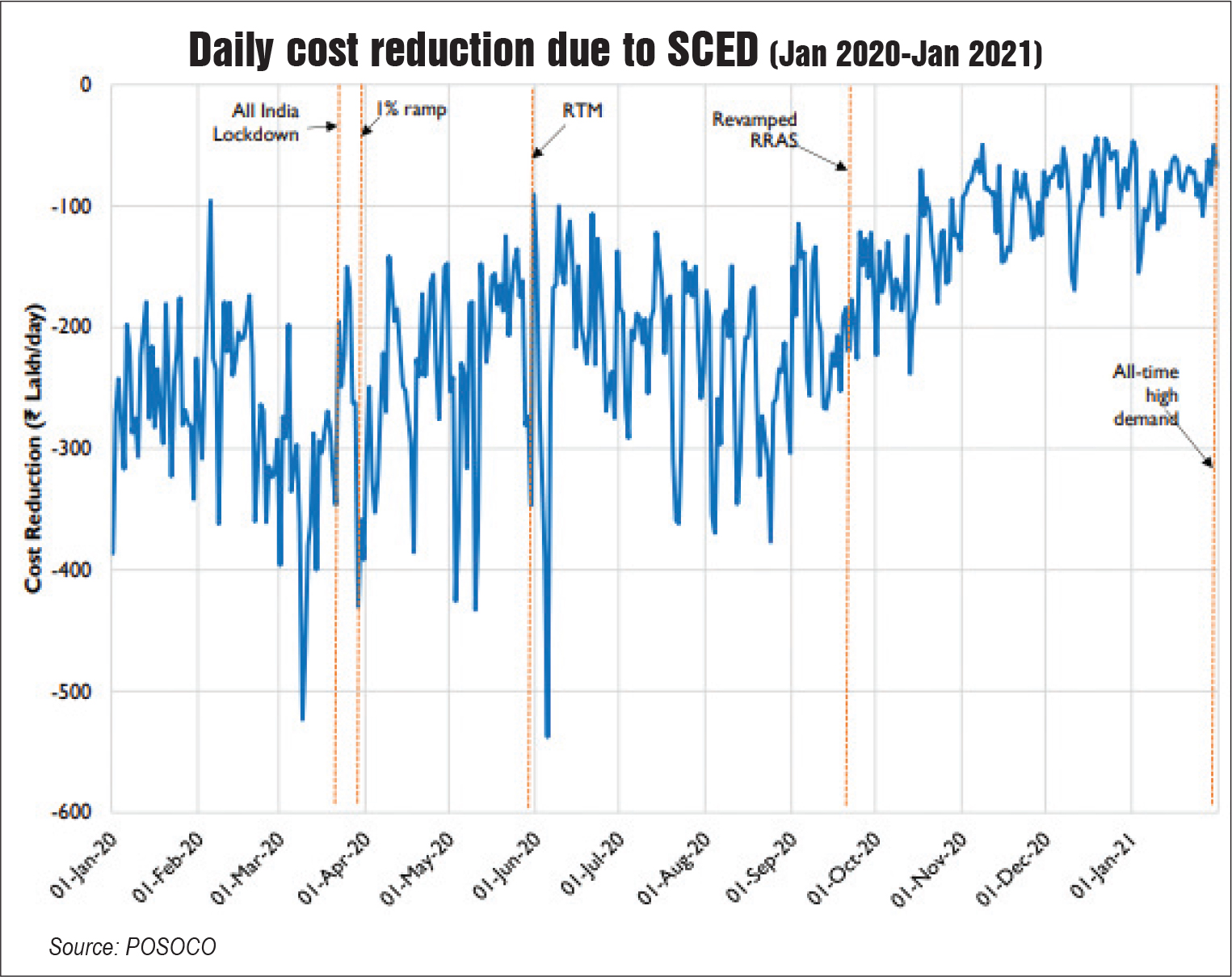 As the RTM provides an avenue to generators to sell their unrequisitioned power after gate closure for constituents, it is generally expected that RTM sale by SCED generators would diminish the margin available for SCED to perturb generation and reduce the variable cost of generation. On an average, the daily quantum of sale in the RTM by SCED generators was 2.5 MUs, which is quite minuscule. To get a rough idea of this impact in quantitative terms, a sample study was carried out for the period December 1-15, 2020. SCED operation was simulated on a test bench for this period, considering ISGS schedules, with and without RTM trades. On an overall basis, the study results show that SCED savings reduced by 3 per cent with the incorporation of RTM.

Ease of generator operations: The SCED has brought more certainty in the despatch pattern of generators. There is an average decrease of 19 per cent in the cumulative MW change in schedules and average decrease of 44 per cent in the number of instructions (counting any change in the schedule of the generator by the regional load despatch centre as one instruction) to all generators during the period Jan-Dec 2020. It has resulted in increased plant load factor in lower variable cost power stations and vice versa. Therefore, the SCED pilot has facilitated the ease of generators’ operations by requiring change in the generation schedule less often.

Variations in variable cost: Over time, the variable charges of costlier stations have come down. This may be on account of optimisation in coal allocations and coal movement by generating stations. The maximum variable cost, which went up to 443 paise per kWh in October 2019, come down to 317 paise per kWh in January 2021. The standard deviation of variable cost within the SCED stack reduced from 87.6 paise per kWh in June 2019 to 58.6 paise per kWh in January 2021. It follows that with reduced variation in variable charges, the potential for cost reduction also comes down, which may explain the trend towards lower cost reduction seen in the second half of 2020. The trend of daily average cost of generation since the commencement of the SCED pilot shows that post-April 2020, there was a decrease in the average cost, due to the impact of costlier machines going off-bar during the lockdown-induced low-demand period.

Look-ahead SCED and SCUC: The formulations of look-ahead SCED and SCUC were tested as part of the pilot project. A look-ahead SCED algorithm has been developed and its operation and results have been simulated for a period of one week. The key driver for a look-ahead SCED implementation has been the reduction of potential infeasibilities as the model has a longer-term visibility. It has been observed that for around 10 per cent of time during the simulated week, ramping up reserves are zero, even with the look-ahead model. An in-house SCUC software has been built with the objective to minimise the operation cost, while also maintaining requisite reserves for a rolling three-day window, in line with the draft IEGC 2020. The operation costs comprise energy costs and start-up costs. 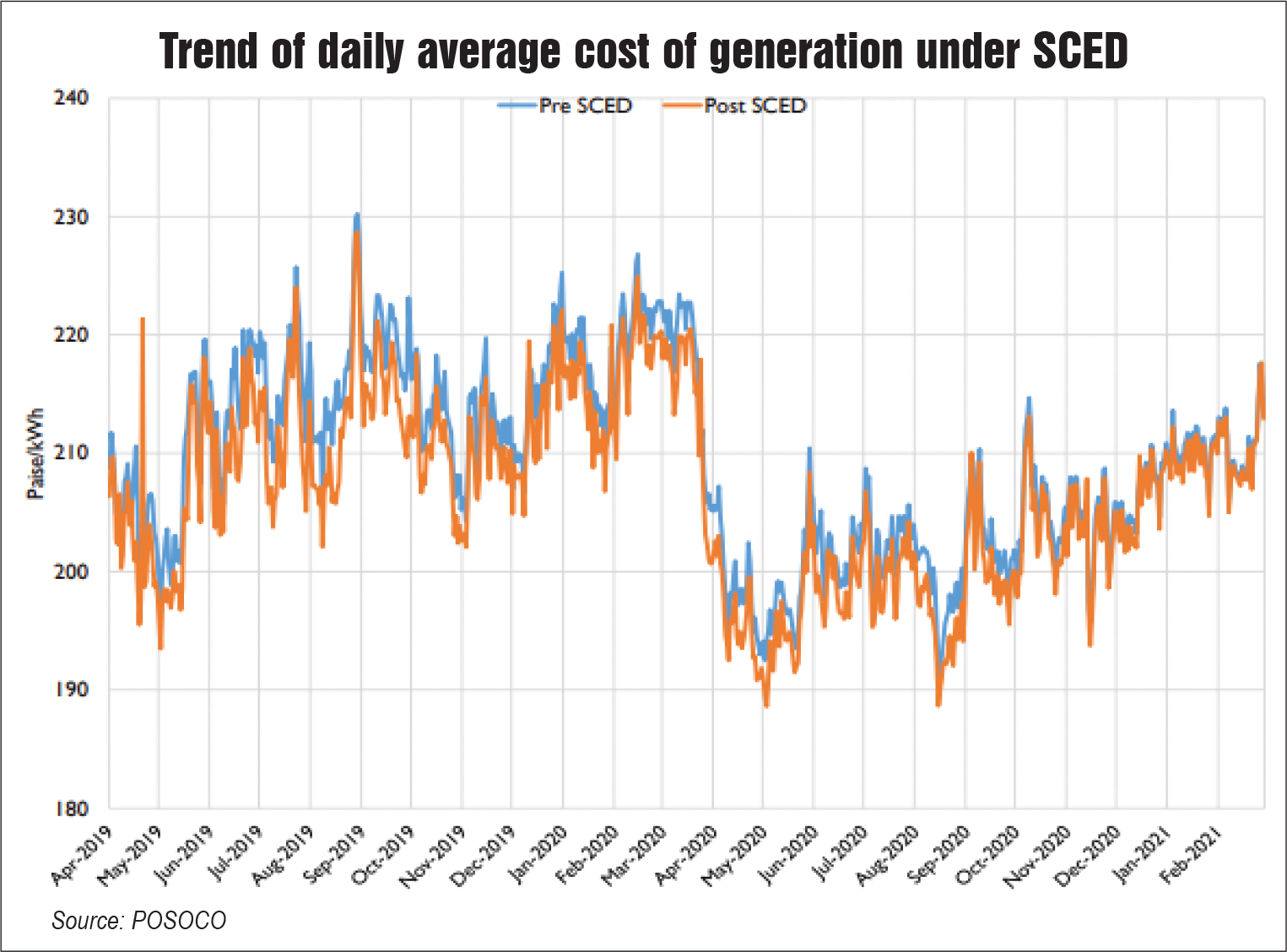 The CERC has extended the implementation of the SCED pilot till September 30, 2021. The commission notes that the pan-India lockdown for the containment of Covid-19 had an impact on the SCED pilot as a significant portion of the generation capacity went under reserve shut-down due to demand reduction. Meanwhile, POSOCO’s detailed feedback report has also put forth various suggestions for the implementation of SCED, going forward. These include consideration of variable charge declaration by the generator on a fortnightly basis or a weekly basis, instead of a monthly basis; requirement of incremental heat rate curve for each generator; need to bring down minimum turn-down level for generator; optimisation considering full transmission network; need to create a framework for SCUC; and replicating the SCED at the intra-state level through state load despatch centres. The CERC is already in the process of taking suitable action with regard to these suggestions and any suitable action would be undertaken following the due regulatory process. Overall, the six-month extension for the implementation of the SCED would provide more insights on different aspects related to optimal scheduling and despatch across multiple market avenues.