It has been over a decade since tariff-based competitive bidding (TBCB) in transmission was introduced. So far, around 35 interstate transmission projects have been awarded to private players via the TBCB route. The growing private participation in the segment has brought in a multitude of benefits for the sector as well consumers. It has been observed that the tariff discovered for a transmission project bid out under TBCB can be lower than that bid out under the cost-plus regime by almost 30-40 per cent. The increasing private investment in the segment has also helped reduce the burden on government finances, which can be spared for other priority sectors. Not only this, private participation has also resulted in better risk sharing between project stakeholders as well as introduction of advanced technology by new players, leading to cost and time efficiency.

However, despite these benefits, TBCB has failed to pick up at the intra-state level with just a handful of states such as Maharashtra, Madhya Pradesh, Rajasthan and Uttar Pradesh awarding projects via TBCB. Given that intra-state transmission system has a major share in the transmission segment (54 per cent share in total line length at 220 kV and above voltages) in the country, the adoption of TBCB can help reduce the burden on state governments’ finances as well as reduce tariffs, leading to consumers’ benefits. In light of these gains and in the larger interest of consumers, the Ministry of Power (MoP), in a letter to state governments on March 15, 2021, strongly recommended adopting TBCB for the development of the intra-state transmission system. Power Line takes stock of the progress so far under TBCB, at both the interstate and intra-state levels …

The Electricity Act, 2003 provides for participation of the private sector on a competitive basis, in order to encourage greater investment in the power sector. The National Electricity Policy, 2005 also noted that private participation in generation, transmission and distribution is crucial and central and state governments should develop workable models for public-private participation. Likewise, the Tariff Policy that came in 2006, called for attracting investments for the optimal development of transmission networks to ensure efficient utilisation of generation assets. In line with these policies, the MoP notified TBCB Guidelines for Transmission Service and also Guidelines for Encouraging Competition in Development of Transmission Projects in April 2006. Subsequently, standard bidding documents were notified by the ministry in 2008, followed by certain amendments in the ensuing years. With this, TBCB started for the development of the interstate transmission system (ISTS) since 2010.

In 2016, the central government notified the revised Tariff Policy with two key provisions regarding the transmission system – first, the investment by transmission developers would be invited through competitive bids; and second, all future interstate transmission projects would be developed through a competitive bidding process, although the central government may give exemption for projects of strategic importance or works required to be done on an urgent basis. 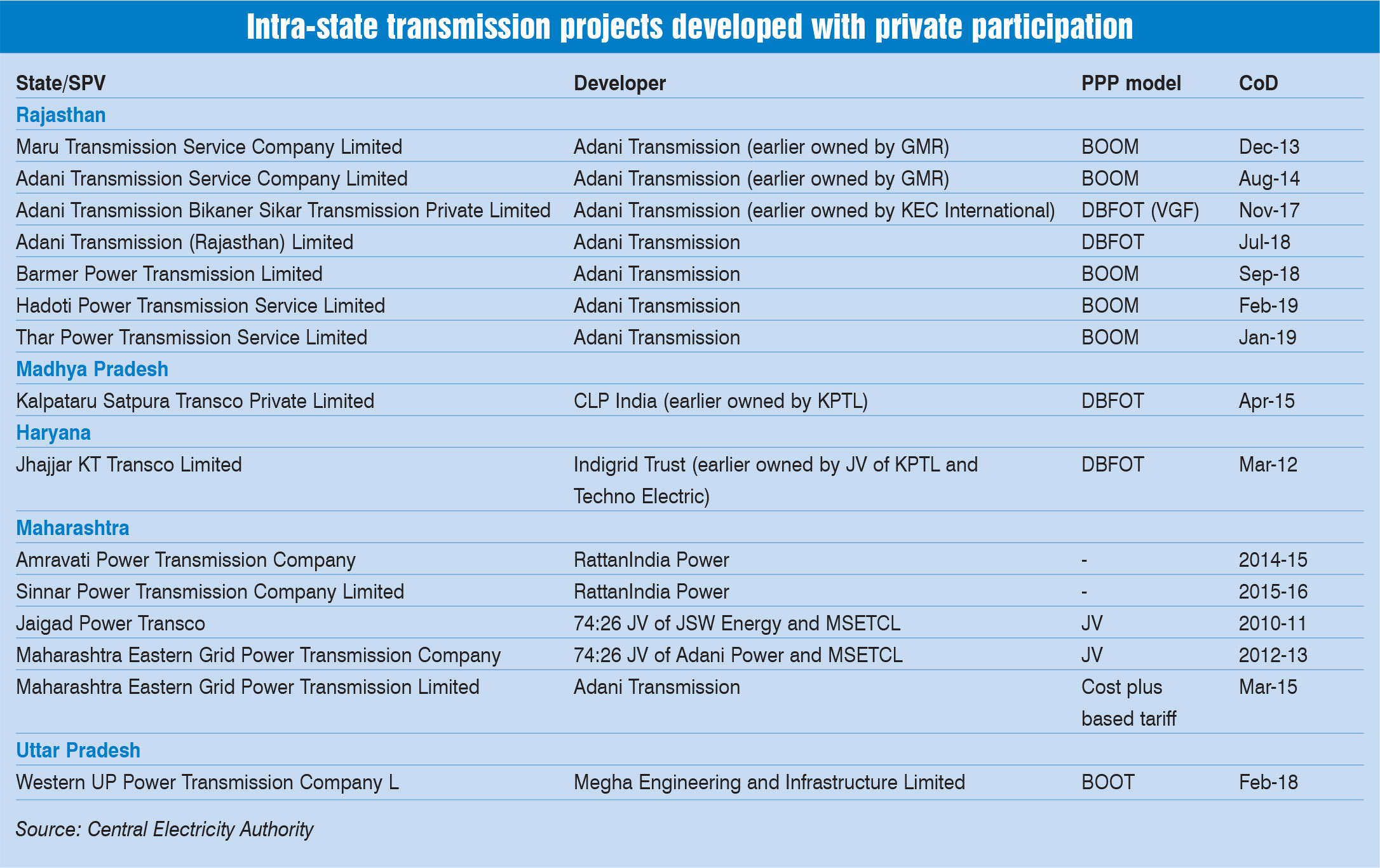 TBCB update at the interstate level

As per the Central Electricity Authority, 50 interstate projects have been bid out to public and private players as of March 2021. This excludes four projects, which have been cancelled or are under litigation. Of these, 15 projects were secured by state-owned Power Grid Corporation of India Limited (Powergrid), 35 projects worth Rs 424 billion have been won by private players. In addition, of the private sector projects won so far, 21 have been commissioned (nearly Rs 209 billion) and the remaining 14 (worth about Rs 215 billion) are under construction.

Among private players, Sterlite Power Transmission Limited (SPTL) has secured the highest number of projects (15) entailing an estimated cost of nearly Rs 245 billion. Of these, nine projects have been commissioned and six are under construction. Adani Transmission Limited (ATL) has won 11 projects aggregating Rs 99 billion, of which six are under-construction projects. Essel Infrastructure Limited (EIL) has commissioned two projects and has another two, which are under construction (four projects aggregating Rs 61.52 billion). However, many players have monetised their completed and under-construction assets through transfer to infrastructure investment trust such as Indigrid or sale to other companies (see table). 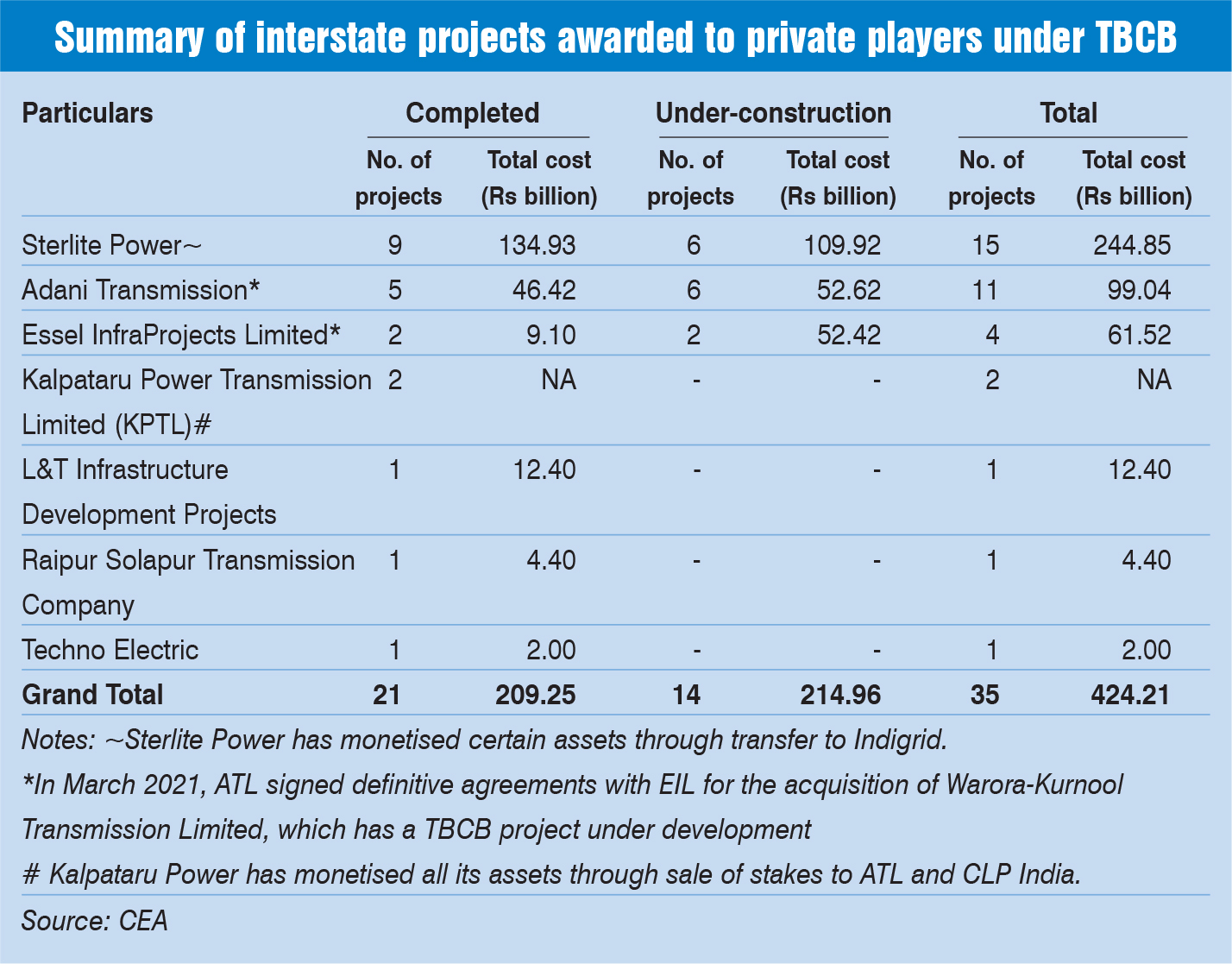 Private participation at the intra-state level

At the intra-state level, private players have commissioned 15 intra-state transmission projects in Rajasthan, Madhya Pradesh, Maharashtra, Haryana and Uttar Pradesh through various PPP models such as BOOM (build own, operate and maintain), DBFOT (design, build, finance, operate and transfer), BOOT (build, own, operate and transfer) and joint ventures (JVs) (see table). Adani Transmission has commissioned a significant number (eight) of intra-state projects. Other private players that have executed intra-state TBCB projects include Kalpataru Power Transmission Limited-Techno Electric JV (its projects have now been acquired by Indigrid and CLP), RattanIndia Power, Megha Engineering and Infrastructure Limited. Meanwhile, there are six TBCB projects under construction at the intra-state level. The most recent project is the Rs 13 billion project in Madhya Pradesh, awarded in February 2021 through competitive bidding held by REC Power Transmission Company. Under the project, ATL will set up 16 new substations and strengthen the system in the existing power supply network. Earlier in December 2019, ATL had secured the Kharghar Vikhroli Transmission project from Maharashtra State Electricity Transmission Company Limited on a BOOM basis.

While private players have contributed significantly to the development of ISTS through competitively bid projects, the TBCB pipeline at the intra-state level remains weak. The law stipulates that states are to come out with a threshold amount, above which they will develop transmission projects through TBCB, but not too many states have done so; Bihar decided not to opt for TBCB even after the regulator determined the said threshold amount. Given that most states are deficit of the transmission system and need to reinforce their infrastructure to cater to customers’ needs, especially with the growing integration of renewables, private participation via TBCB is the way forward.