Switchgear and substations are critical components of power transmission and distribution (T&D) networks. Switchgear is a combination of devices such as switches, fuses, circuit breakers and relays, which are used to monitor, regulate, control, protect and isolate electrical equipment throughout the grid. Substations are another important component of power systems, which regulate the electricity voltage depending on the utility’s needs. Substations consist of high voltage electrical equipment such as transformers, switchgear and associated devices. As T&D utilities augment and expand their infrastructure to supply electricity to a growing consumer base, the demand for switchgear and substations continues to increase.

With the decarbonisation, decentralisation and digitalisation of the energy sector, electrical utilities are taking steps to transition and upgrade their power systems to cater to future grid requirements. Market players are making efforts to integrate new technologies in switchgear and substations as well. The automation of electrical equipment including switchgear and substations has graduated from SCADA to remote terminal units to intelligent electronic devices (IEDs). Conventional electromechanical relays have been replaced with ones containing firmware, communications interfaces, and multiple functionalities, making power systems smarter.

Notably, digital switchgear and substations are gaining traction across utilities. Digitalisation enables utilities to identify, prevent and rectify faults, thereby ensuring reliable power flow in the grid and to consumers. This has been made possible by the use of sensors and IEDs throughout the substation including the switchyard. Further, the deployment of the IEC 61850 protocol has provided seamless communication and integration between IEDs of different manufacturers. In addition, the application of process bus architecture in digital substations helps add flexibility by enabling digital devices to communicate directly with each other. The process bus architecture also enables the replacement of bulky copper wiring with optic fibre, making digital substations more compact and safer than conventional substations. 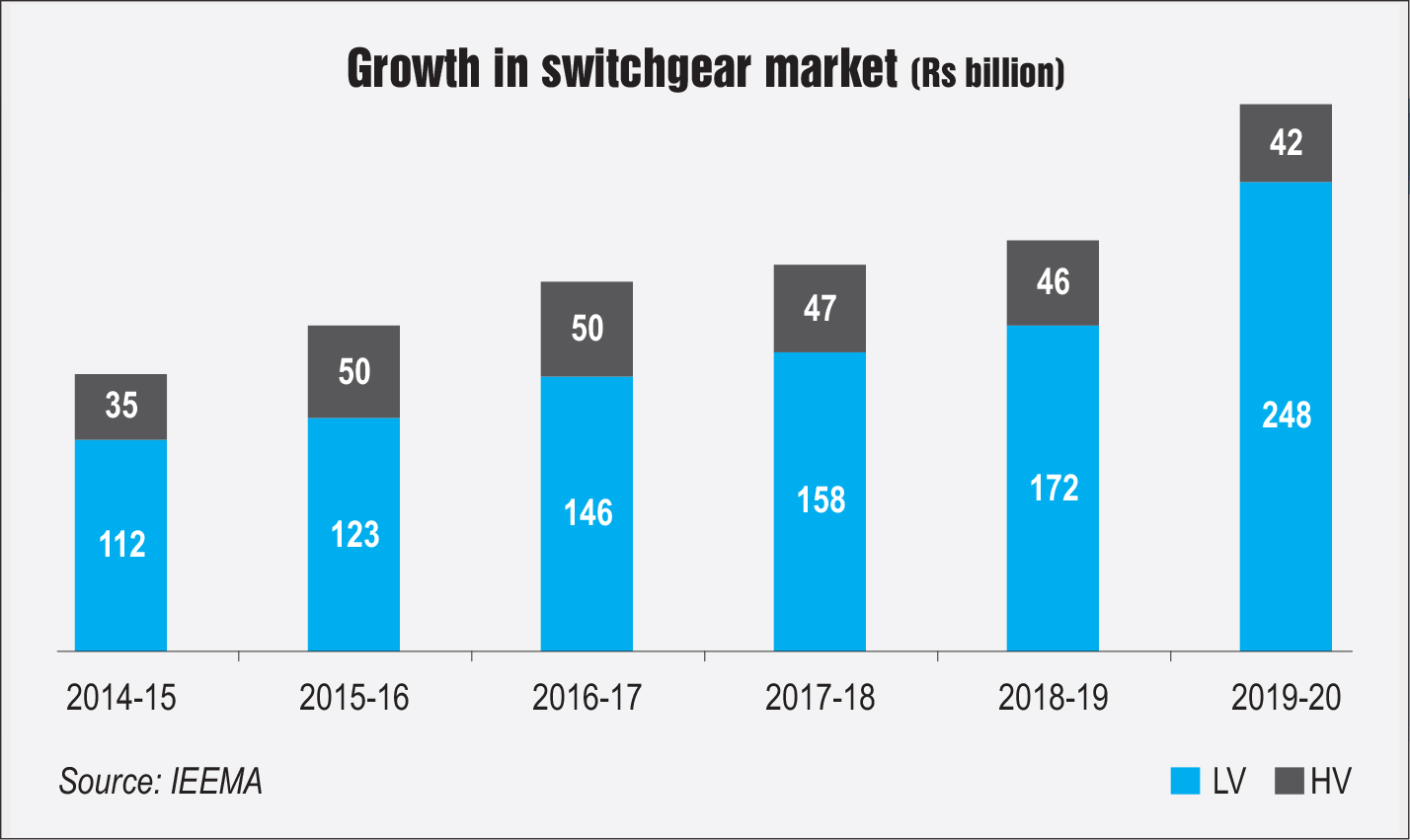 Another key trend is the growing installation of GIS and hybrid substations in place of conventional AIS substations as Indian utilities grapple with right-of-way (RoW) issues. GIS substations are indoor-type, wherein equipment is placed inside modules filled with sulphur hexafluoride gas (the insulating medium). They require substantially less space (around 35 per cent less than AIS substations), entail lower maintenance costs and also have a lower outage rate. The failure rate of a circuit breaker and a disconnecting switch in GIS is one-fourth of that of AIS. Further, since GIS is contained in a metal enclosure, it produces less noise and is safe to operate. Although, the initial cost of a GIS is around 50 per cent more than that of AIS, when the cost of land is considered the overall capital cost is comparable. GIS technology is also being promoted through the Integrated Power Development Scheme (IPDS), under which 102 such substations have been approved across 78 towns at a cost of over Rs 9 billion.

The anticipated growth in T&D networks in the coming years will drive the demand for substations and switchgear. An evacuation infrastructure for 450 GW of renewable energy will be required by 2030. Key government schemes like Green Energy Corridors and Renewable Energy Zones; growth in cross-border interconnections; and the proposed transnational electricity grid initiative – One Sun One World One Grid – are likely to ensure continued demand for electrical equipment.

In the distribution segment, government programmes like IPDS and the Deendayal Upadhyaya Gram Jyoti Yojana are the primary demand drivers for substations and switchgear. In the latest budget, the finance minister announced the launch of a Rs 3 trillion reforms-based result-linked scheme for the distribution segment. The scheme will primarily focus on infrastructure creation and is likely to spur demand for electrical equipment at the sub-T&D level.

To conclude, while the short-term demand for electrical equipment has been affected due to the impact of Covid-19 on project execution, the long-term demand drivers for substations and switchgear are quite strong.