Distribution utilities across the country strive to provide electricity to consumers at affordable tariffs but are often unsuccessful in their efforts, owing to constantly increasing expenses. The rise in power purchase cost (PPC), which accounts for 67-78 per cent of the discoms’ annual revenue requirement (ARR), plays a major role in this increase and consequently reflects in retail supply tariffs. Other factors include transmission charges (9.5-13.5 per cent of ARR) and operations and maintenance expenses (6-21 per cent). Although cost-reflective tariffs are crucial for ensuring discoms’ financial health, they cannot keep increasing without restraint and be passed on to consumers. It is therefore crucial to analyse the factors that affect retail tariff and address the controllable ones, in order to reduce consumer tariffs.

The Forum of Regulators (FoR) has recently launched a report, titled “Analysis of Factors Impacting Retail Tariff and Measures to Address Them”, wherein it deliberates on various factors leading to the high cost of power and recommends measures towards reduction of retail tariff. The FoR took 12 states into consideration for its analysis: Andhra Pradesh, Assam, Bihar, Gujarat, Haryana, Jharkhand, Karnataka, Kerala, Madhya Pradesh, Odisha, Uttarakhand and Uttar Pradesh. Power Line presents the key findings of the report…

The PPC of discoms is directly related to cost of generation (CoG), which, in turn, is impacted by factors such as fuel cost, railway freight charges and coal grade slippage. The increase in coal price and railway freight over the past couple of years has resulted in a steep increase in the CoG as well as PPC. The price of coal (G11-G14 grades used in power generation) has increased by 13-18 per cent since 2015-16. Coal price has also been on the rise because of the increase in clean energy cess – from Rs 50 per tonne of coal in June 2010 to Rs 400 per tonne since March 2016. In fact, the total impact of clean energy cess on the power sector is quite considerable at Rs 250 billion per year in the last three years (Table 1). It has been estimated that are duction in clean energy cess by Rs 100 per tonne would lead to a saving of about 6 paise per unit, translating into a saving of 3 per cent of the average cost of supply (ACS). 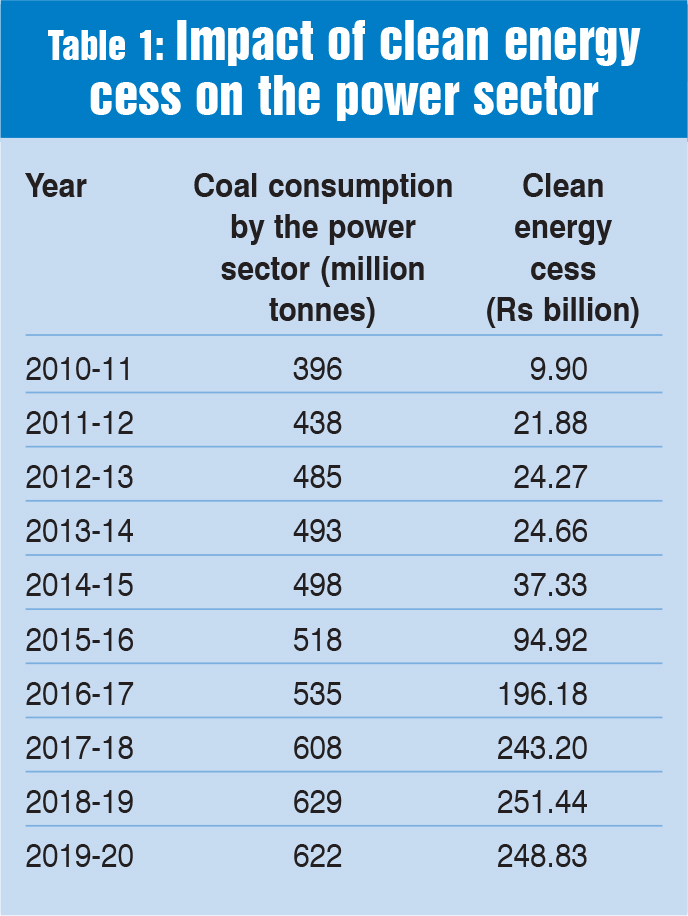 Another factor that leads to increase in CoG is slippage in the grade of coal, in terms of gross calorific value (GCV), received by power stations. The GCV loss due to grade slippage between coal “as billed” and “as received” is about 600 kCal per kg, and for every 100 kCal per kg saving in GCV loss, savings of about 3 per cent or nearly 5 paise per unit can be achieved in energy charges.

Transmission charges are another important factor affecting retail supply tariffs. The annual transmission charges for the interstate transmission system (ISTS) have increased at a compound annual growth rate (CAGR) of 21 per cent, from Rs 90 billion in 2011-12 to over Rs 390 billion in 2019-20. Among the 12 states considered by the FoR, Andhra Pradesh recorded the highest CAGR in central transmission utility (CTU) charges at 59 per cent, followed by Haryana (40 per cent) and Uttar Pradesh (25 per cent) for the period between 2016-17 and 2019-20. In the case of state transmission utility (STU) charges, the highest CAGR was observed for Bihar (63 per cent) and Jharkhand (32 per cent) (Table 2). 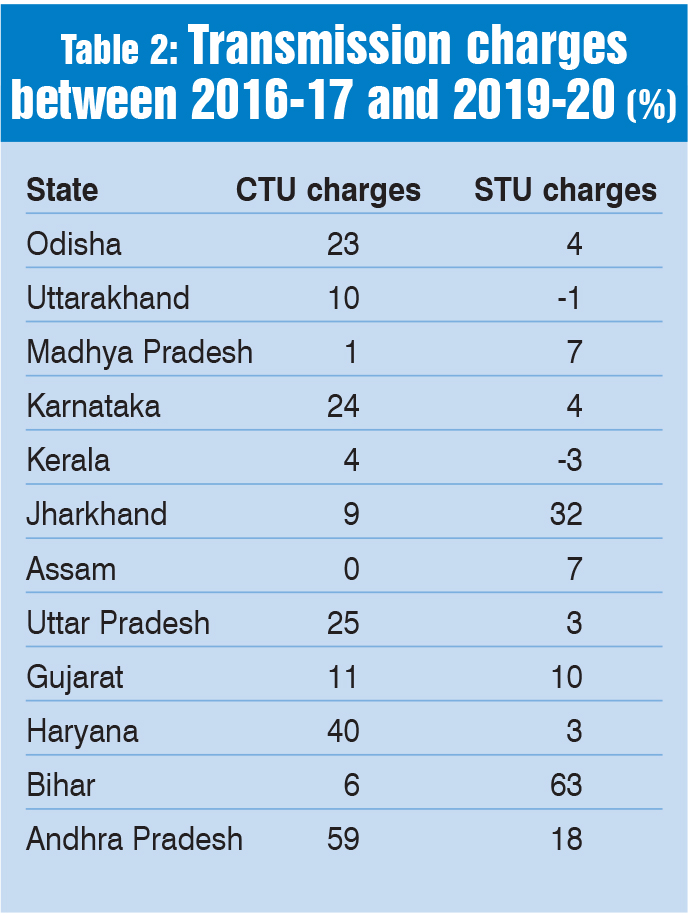 One of the factors behind high transmission charges is that the transmission system has been designed to cater to a projected electricity demand, which is higher than the actual realised demand. The ISTS was designed for a projected peak demand of 201 GW for 2019-20, whereas the actual peak demand for the year stood at 184 GW. Likewise, the actual energy requirement in 2019-20 stood at 1,290 BUs as against the projection of 1,400 BUs. Similar trends have been observed in previous years as well. Further, green energy corridor-related transmission costs are also being loaded on to the CTU cost.

An analysis of the depreciation cost showed that if the loan repayment period considered for depreciation is extended from 12 years to 15 years, it would decrease the ACS by 8 paise per unit of retail tariff. Further, if the depreciation rate is reduced to 4.3 per cent, considering the loan period of 15 years to repay 65 per cent of the capital cost, the reduction in retail tariff could be in the range of 10 paise. In addition, substantial savings can be achieved by retiring inefficient old plants that have been in operation for over 30 years. This can help reduce energy charges by 4 per cent-23 per cent. Besides, the installation of flue gas desulphurisation systems will also increase the CoG. The impact is likely to be in the range of about 24 paise per unit. Further, as per the latest draft notification, dated April 2021, from the environment ministry on ash utilisation, the cost of transportation of fly ash up to 300 km is to be borne by thermal power plants (TPPs), which will again affect the CoG. Assuming an average generation of 250 gm per kWh and an ash transportation cost of Rs 2-Rs 3 per tonne for 300 km, the total impact on the CoG works out to be 15-23 paise per unit. 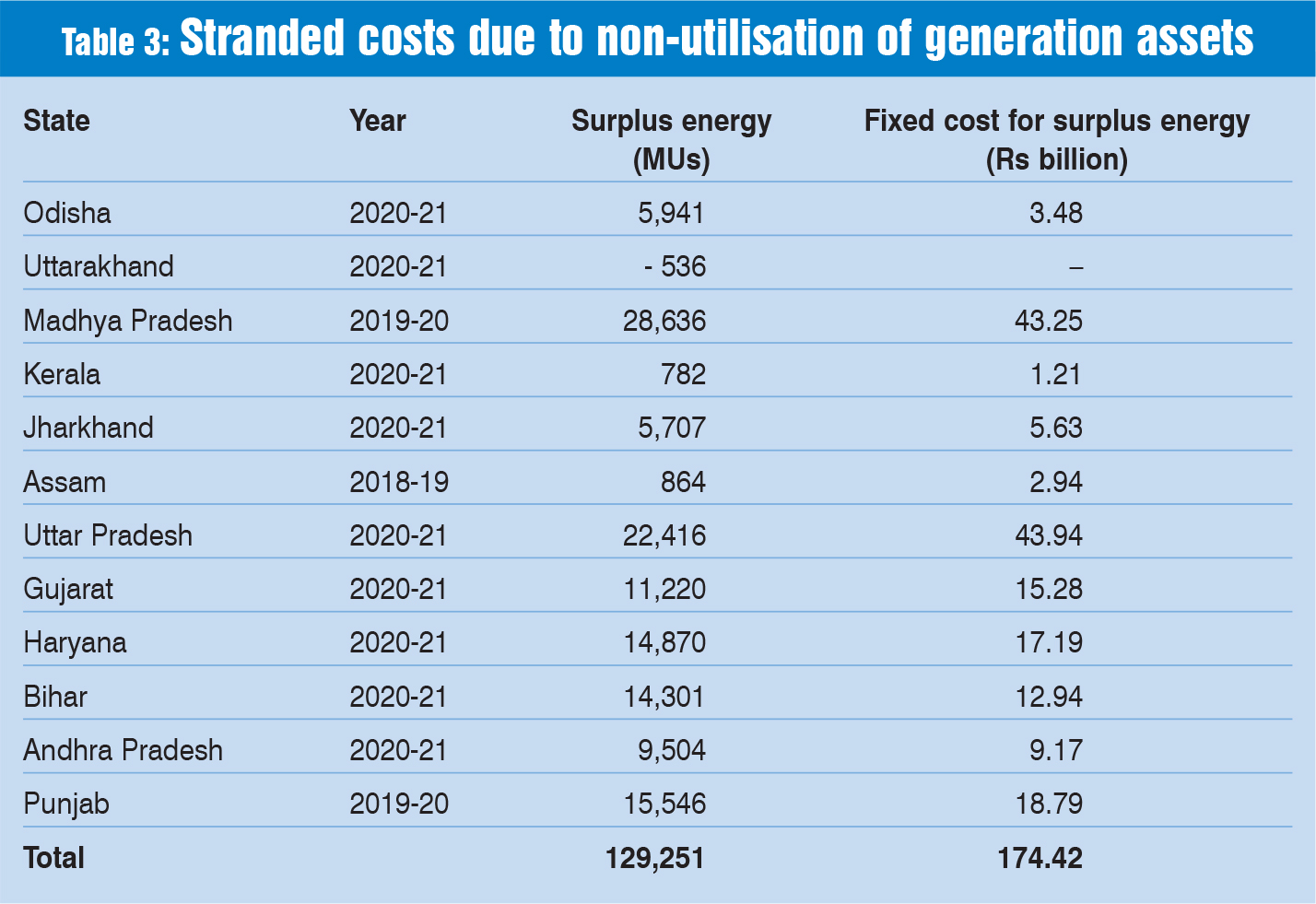 The FoR lists several recommendations for policymakers to arrest the increase in CoG as well as retail tariffs. Some of these are as follows.

Accurate transmission planning: There has been a huge investment in inter-state transmission, but the utilisation of the assets has not been commensurate with the investment, resulting in high transmission charges, which are ultimately loaded on to consumer tariffs. The FoR suggests that consumers should not be burdened with the monetary implications arising due to the forecasts of transmission planners, especially when the forecasts are not fully achieved, resulting in low or partial use of the system. It is recommended that in the future, transmission planning should be based on accurate demand forecasts by discoms and STUs. Also, the central government should share the cost of stranded assets by utilising the clean energy cess. Further, the tariffs of all new transmission projects, including state-owned projects above a particular investment threshold limit, should be determined on the basis of a competitive bidding. In recent years, levellised tariffs for competitively bid transmission projects have been lower than those determined on cost-plus basis.

Controlling the fixed cost of PPAs linked with stranded generation assets: As in the case of transmission assets, the fixed cost of stranded generation assets is also being borne by consumers. The stranded costs due to underutilisation of generation assets is immense and ranges from Rs 1.21 billion (Kerala) to Rs 43.94 billion (Uttar Pradesh) for the states under review (see Table 3). The total surplus energy across these states stands at about 129 BUs, and the resultant fixed cost outgo for discoms stands at Rs 174 billion. It is imperative to manage surplus energy and the resultant cost, which is estimated at Rs 1.34 per unit. In addition, the cost of balancing renewables has been estimated at Rs 1.10 per unit by the Central Electricity Authority, while the additional stranded capacity cost (incremental fixed charge) on account of renewable energy integration is about Rs 1.02 per unit. Combined, these costs can put significant financial strain on discoms. The FoR, therefore, suggests that the government should help discoms meet the fixed cost of the PPAs associated with stranded assets. The burden of the stranded generation assets should be shared by the central government and the state government in the ratio of 60:40.

Further, discoms wishing to exit from PPAs of old plants that have outlived their life or are very costly should not be tied to bulk power supply agreements. The 25-year life of PPAs for new projects contracted through competitive bidding is too long, and shorter-duration PPAs with flexible exit clauses should be promoted.

Monitoring of GCV: Proper monitoring and regulation of the GCV of the coal supplied to TPPs can help reduce energy charges significantly. The GCV should not be allowed on an “as fired” basis, but on an “as received” or “as billed” basis plus a margin of errors (due to transportation and other losses). In addition, third-party assessment/measurement of GCV and developing proper sampling and measurement mechanisms to control grade slippage can help gencos trim energy costs.

Review of clean energy cess: With the increasing investment in renewables, the FoR feels that the rationale for continuation of the clean energy cess needs a review. If the government plans to continue it, the proceeds from the cess may be ploughed back into the electricity sector to mitigate the incremental cost on account of new environmental norms.

Independent regulator for railways: Given the rising freight charges, which are significantly higher than what can be justified by inflation indices, the FoR recommends that the railways sector also be regulated, as it currently enjoys a monopoly. The central government may also consider subsidising railway freight for distances beyond 750 km.

Need for realistic RoE rates: The RoE for generation and transmission should be linked to the 10-year G Sec rate (based on the average rate for the past five

years) plus a risk premium subject to a cap, as may be decided by the state electricity regulatory commission (SERC). For discoms, the RoE could be fixed based on the risk premium assessed by the SERC. Since the performance of the discoms has a significant impact on retail tariffs, there is a need to link recovery of RoE with the performance of the utilities (based on indicators such as supply availability, network availability and AT&C loss reduction).

Power procurement mix optimisation: There is considerable scope for a reduction in PPC if merit order despatch is followed strictly and the power market is used for optimisation of power procurement. Merit order despatch needs to be followed by all states by comparing the variable cost of state gencos with the prices prevailing at the exchanges, and procuring from the most economical source. Further, the state load despatch centres (SLDCs) should be given independent status and it should be their responsibility to ensure merit order despatch of electricity on a day-ahead and a real-time basis. The merit order must be prepared by the SLDC every month, based on the actual fuel prices of the previous month.

Other recommendations: Other recommendations by the FoR pertain to rationalising the depreciation rate, encouraging renewable energy with energy storage for better utilisation of transmission assets, capping of the trading margin at 2 paise per unit from the current 7 paise per unit, waiving water usage charges for hydro projects, and reducing AT&C losses by better reactive power management (as adopted in Tamil Nadu), among others.

Certain factors such as the cost of stranded transmission and generation assets, as well as the increasing clean energy cess need the urgent attention of policymakers. Similarly, the establishment of independent coal and railway regulatory bodies is a crucial step so that inefficiencies in these sectors are not passed on to the power sector. Net, net, the recommendations of the FoR, if implemented, can go a long way in optimising the generation and power procurement costs of discoms, thereby lowering retail supply tariffs.