Until now, Adani Green Energy Limited (AGEL) had been focusing on renewable energy capacity expansion through greenfield investments. With this strategy, its renewable energy portfolio grew substantially, from only 0.3 GW in 2015-16 to 14.8 GW in 2020-21. However, recently, it signalled its strong interest in augmenting its renewable energy exposure through acquisitions as well. In May 2021, AGEL acquired SB Energy India, which has 4.95 GW of renewable assets, through an equity purchase worth $625 million (about Rs 46 billion). The transaction valued SB Energy India at an enterprise valuation of about $3.5 billion (Rs 260 billion). Notably, the deal marks the largest merger and acquisition deal in the renewable energy space in India.

SB Energy India is a renewable energy company of which a Japanese venture capital enterprise, the SoftBank Group, owned 80 per cent equity and Bharti International owned the rest. The company began operations in India in mid-2015, driven by the fact that India has twice the sunshine exposure of Japan. In addition, due to several factors such as labour, government assistance and land costs, the installation of a solar power plant in India is half as expensive as it is in Japan. These two factors were key drivers for its aspiration to develop 20 GW of renewable capacity in India at an investment of $10 billion over the next decade. In 2018, it announced ambitious plans of investing $40 billion-$45 billion for creating solar cell and module production facilities in India.

Factors leading to the sale

The company, however, began to suffer the consequences of its audacious expansion from late 2019 onwards when its high cost structure and low tariff bids began to contract its growth. These adverse developments were further exacerbated by extraneous factors such as issues in land acquisition, cost and time overruns, and environmental approval gridlocks. For instance, its 250 MW solar plant at Kadapa, Andhra Pradesh, and the 300 MW solar park at Bhadla, Rajasthan – its biggest projects –  were caught in regulatory bottlenecks, delaying their commissioning.  Recently, the central government issued an order imposing a 40 per cent basic customs duty (BCD) on solar modules and a 25 per cent BCD on solar cells from April 1, 2022, which is likely to have a detrimental impact on the expenditure and returns of renewable energy companies.

SoftBank began to search for potential buyers in the second half of 2020, when the industry was facing major headwinds. It was poised to be sold to the Canada Pension Plan Investment Board; however, the deal collapsed after several months of negotiations. In the meantime, AGEL expressed its interest in acquiring the company at $625 million, with $500 million to go to SoftBank and $125 million to its junior partner, Bharti International. The deal eventually went through without any major hiccups. 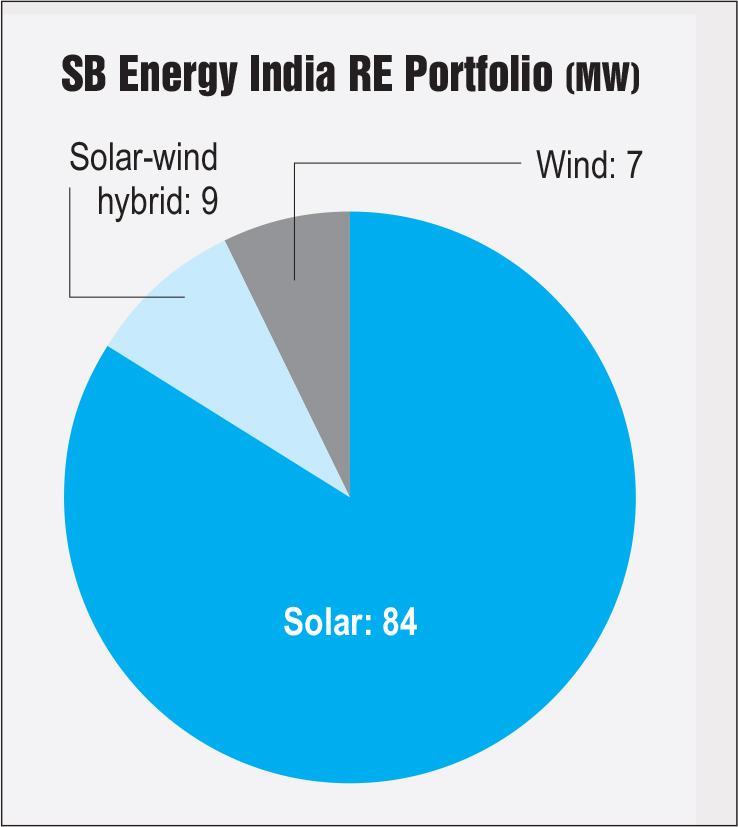 SB Energy’s portfolio consists of large-scale renewable energy assets, comprising 84 per cent solar capacity (4,180 MW), 9 per cent wind-solar hybrid capacity (450 MW) and 7 per cent wind capacity (324 MW). It has 1,400 MW of operational solar power capacity, and a further 3,554 MW under construction. All the projects have 25-year power purchase agreements with sovereign-rated counterparties such as the Solar Energy Corporation of India, NTPC Limited and NHPC Limited. The projects are spread across four states, with 75 per cent of them being situated in Rajasthan and 17 per cent in Andhra Pradesh. AGEL has a presence, as well as expertise, in executing projects in both states. The average tariff across the portfolio of assets is around Rs 2.75 per unit, with an estimated internal rate of return of 13 per cent. The total portfolio value of all its assets post commissioning is estimated at $3.5 billion (Rs 260 billion). AGEL has acquired the portfolio at 7.5-7.8 times the earnings before interest, taxes, depreciation and amortisation of the company, once all the projects are commissioned. As for financing, the acquisition is an all-cash deal and will be fully funded through internal accruals and an investment of $2.5 billion from French multinational energy company Total SE, which acquired a 20 per cent minority interest in AGEL in January 2021.

With the acquisition of SB Energy, AGEL will own a renewable energy portfolio of 24.3 GW, with an operational capacity of 4.9 GW. This aligns well with the company’s aspirations of becoming the biggest player in the renewable energy space in India, with 25 GW of renewable assets by 2025.