China’s energy sector is undergoing a sea change. In a span of five years (2015-20), the renewable energy share in the country’s generation mix grew at a compound annual growth rate of over 28 per cent. Further, over the next five years, it is estimated that another 62 GW of new renewable energy capacity will be added to the country’s capacity mix.

Renewable energy is likely to drive power installation and investments in 2021 and beyond as China aims to achieve carbon neutrality by 2060. Interestingly, non-fossil fuel-led installations and investments accounted for 55 per cent of new power generation capacity and 90 per cent of generation capex in the first quarter of 2021, while capex contribution from thermal power fell to 10.1 per cent, from 10.5 per cent in 2020. This can be attributed to government restrictions on thermal power installations due to their environmental ramifications.

The country is also investing heavily in new technologies to create a resilient and smart network. In order to significantly enhance its grid capacity, the country’s power grid developers – State Grid Corporation of China (SGCC) and China Southern Power Grid (CSG) – are developing ultra-high voltage (UHV) alternating current (AC) and direct current (DC) lines. Alongside, the country is developing cross-border links as part of its Belt and Road Initiative (BRI), which plans to restore the ancient Silk Route to promote trade and economic integration among the countries of Asia, Europe and Africa.

As per Global Transmission Research, China is expected to invest over CNY 1 trillion during 2021-25 in grid projects, including UHV schemes. Under the 14th five-year plan, the country’s focus will be on strengthening the transmission and transformation network, and improving load management and storage capacity to enhance the adaptability of the power systems when new generation sources are added to the grid.

Further, owing to its commitments to the Paris Agreement to ensure energy transition, the country has been paying considerable attention to the development of energy storage, electric vehicles (EVs) and offshore wind. Another focus area has been investing in digital infrastructure and smart grids.

Most of the investment in China’s power grid has been focused on enhancing the energy supply structure and network to cater to the needs of load centres, and develop a clean, low carbon, safe and efficient energy supply system. With respect to the DC grid, the focus has been on developing ±1,100 and ±800 kV DC projects. To date, both SGCC and CSG have put into operation 16 DC projects each as part of the country’s action plan to reduce coal consumption and control air pollution.

In 2020, SGCC commissioned several key projects such as the ±800 kV Qinghai-Henan transmission line project, the 1,000 kV UHV AC Zhangbei-Xiong’an transmission project and the 500 kV Zhiting-Chunshen project. Also, it operationalised the first smart underground cable line in Nanjing city, which connects to the Nanjing Cable Lean Management and Control Platform, and the world’s first 1,000 kV UHV gas-insulated line, which was laid in the Sutong tunnel under the Yangtze river located in Jiangsu province of China. In addition, CSG recently operationalised the ±800 kV Wudongde transmission project, which spans 16 cities in South China and will help improve power supply in the Guangdong-Hong Kong-Macao Greater Bay Area.

At present, the country is moving towards the completion of some major transmission projects, which will enhance grid connectivity. Over the next few years, over 14 UHV AC and DC projects aggregating an investment of $27 billion will be commissioned in China. The country’s efforts to expand its power grid via UHV AC and DC transmission is being supported by strong cooperation among the Chinese provinces. Several cooperation agreements have been signed between provincial governments to enable the smooth construction and commissioning of transmission projects that span different provinces.

With regard to cross-border projects, China is a part of the Asian Super Grid (ASG) project, which will connect power grids across six countries in Asia – Mongolia, India, Japan, China, Russia and South Korea. In addition, SGCC has plans to establish a Global Energy Interconnection (GEI), which will serve as a platform for the extensive development, deployment and utilisation of clean energy globally through the building of interconnected smart grids using UHV technology. These plans will require substantial investment. The country is also planning a cross-border power link with Nepal. The 400 kV Ratmate (Nepal)- Kerung (China) transmission line will be the first power grid interconnection between Nepal and China, and will ensure energy security by facilitating power trade between Nepal and the Tibet autonomous region of China. 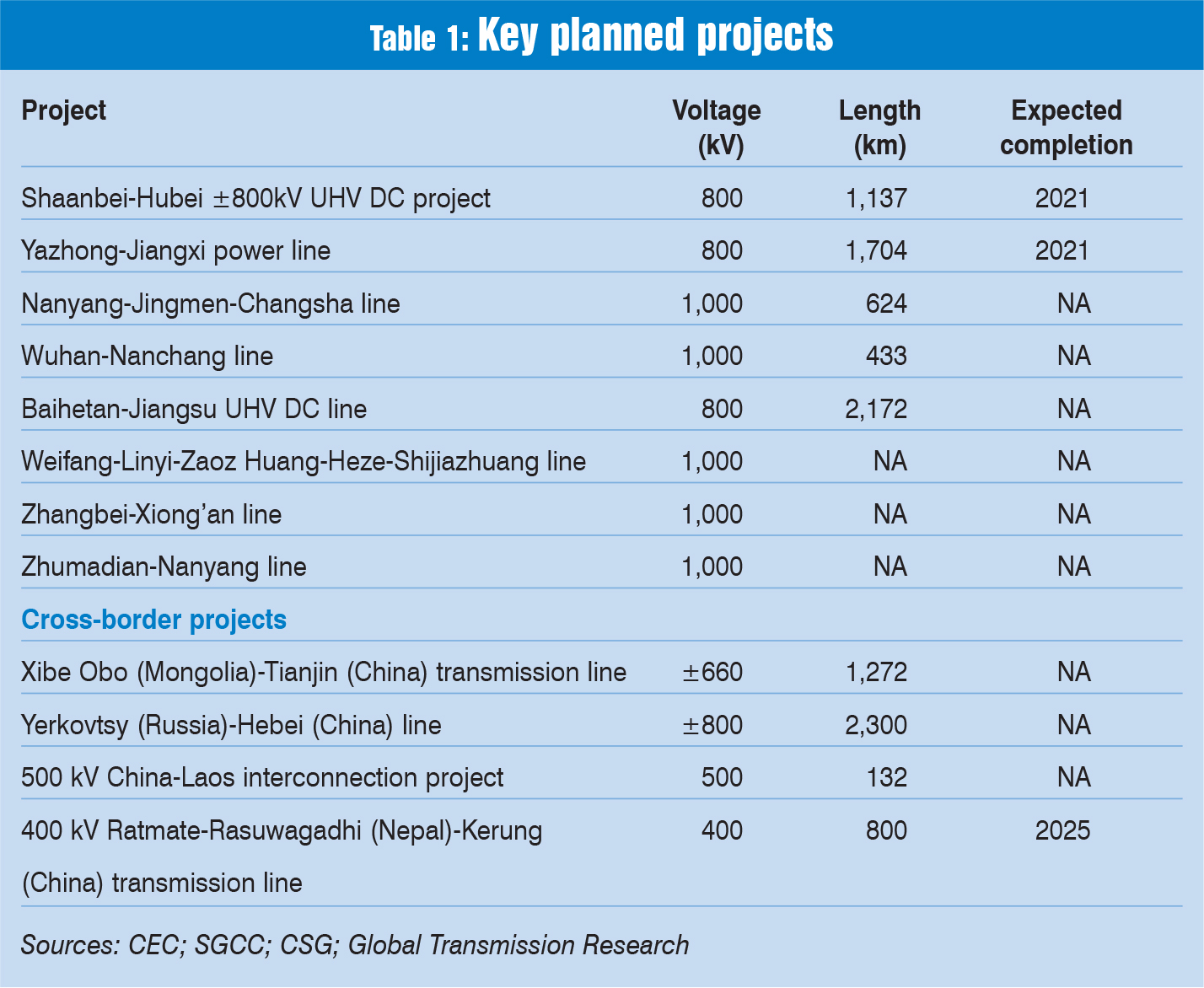 In June 2021, China came forward with a draft policy to significantly increase its current energy storage capacity in the next five years. The policy plans to accelerate the country’s storage capacity, excluding pumped hydro, to 30 GW by 2025. The focus under the plan is to pair renewable energy investments (wind and solar) with storage systems that account for 5-20 per cent of renewable energy in China’s highly regulated power market. The country believes that the growing share of renewable energy could complement its energy storage targets. The policy is expected to attract investments from varied sources, including grid companies as well as state-owned renewables developers.

Earlier, the World Bank approved a $300 million loan for the China Renewable Energy and Battery Storage Promotion Project, which aims to augment the integration and use of renewable energy through the deployment of battery storage systems. The project will help address technical constraints in the country’s transmission networks as well as gaps in the regulatory framework for renewable energy trade between provinces. It will also assist in speeding up the ongoing clean energy transition in China and contribute to the country’s emission reduction targets, which stipulate increasing the share of non-fossil fuels in the primary energy consumption from the current 14.3 per cent to 20 per cent by 2030, and to over 50 per cent by 2050.

One of the recently announced energy storage projects in China is the vanadium redox flow battery firm VRB Energy’s energy storage system (ESS) and battery manufacturing facility in Hubei province of Xiangyang, China. The project includes the deployment of a 100 MW/500 MWh vanadium flow battery-integrated power station, and the construction of the first 50 MW capacity of a 1 GW VRB-ESS manufacturing facility.

Over the past few years, China’s grid developers have invested heavily in building a technologically sound grid infrastructure and have been delivering projects that are the “world’s first” in various technological aspects.

In June 2020, SGCC announced its plan to invest about CNY24.7 billion in digital infrastructure. It signed strategic cooperation agreements with four China-based tech giants – Huawei Technologies, Alibaba Group Holding, Tencent Holdings and Baidu. Referred to as the “new” infrastructure, the investment is aimed at improving cooperation with local governments, enterprises and research institutes to build new digital infrastructure in the energy sector, including big data centres, the industrial internet, 5G networks and artificial intelligence. Apart from this, SGCC has established a high-end research unit, State Grid Smart Grid Research Institute (SGRI), which is the first specialised unit engaged in the development of key technology and equipment for smart grids. In recent years, SGRI has seen a series of major research and development (R&D) achievements in the construction of high-power corridors and smart grids.

For the future, the country has set a target of reaching 60 GW by 2030, for which about 5 GW per year needs to be added. The offshore wind target in the country is driven by its economic growth, the cost and the maturity of the supply chain, and the 2060 carbon neutrality goal. About 4.4 GW, that is, 44 per cent of the global offshore wind capacity, is currently under construction in China. On the technological front, floating offshore wind technology is also being explored. However, it poses challenges such as insufficient water depth, and difficult design, cost-effective and weather conditions.

A major upcoming offshore wind project is the Jiangsu Rudong 800 MW (H6, H10) project, which will employ a ±400 kV flexible DC submarine cable to supply power to the grid. Several other planned offshore wind projects include the Yangjiang Shapa project (Phase II-V) with a cumulative capacity of 1,400 MW, the 300 MW Huadian Fujian Fuqing Haitan Strait project, the Putian Pinghai Bay project (demonstration project being funded by the New Development Bank), and the Yangjiang Fanshi 1 and Fanshi 2 projects (1,000 MW each). 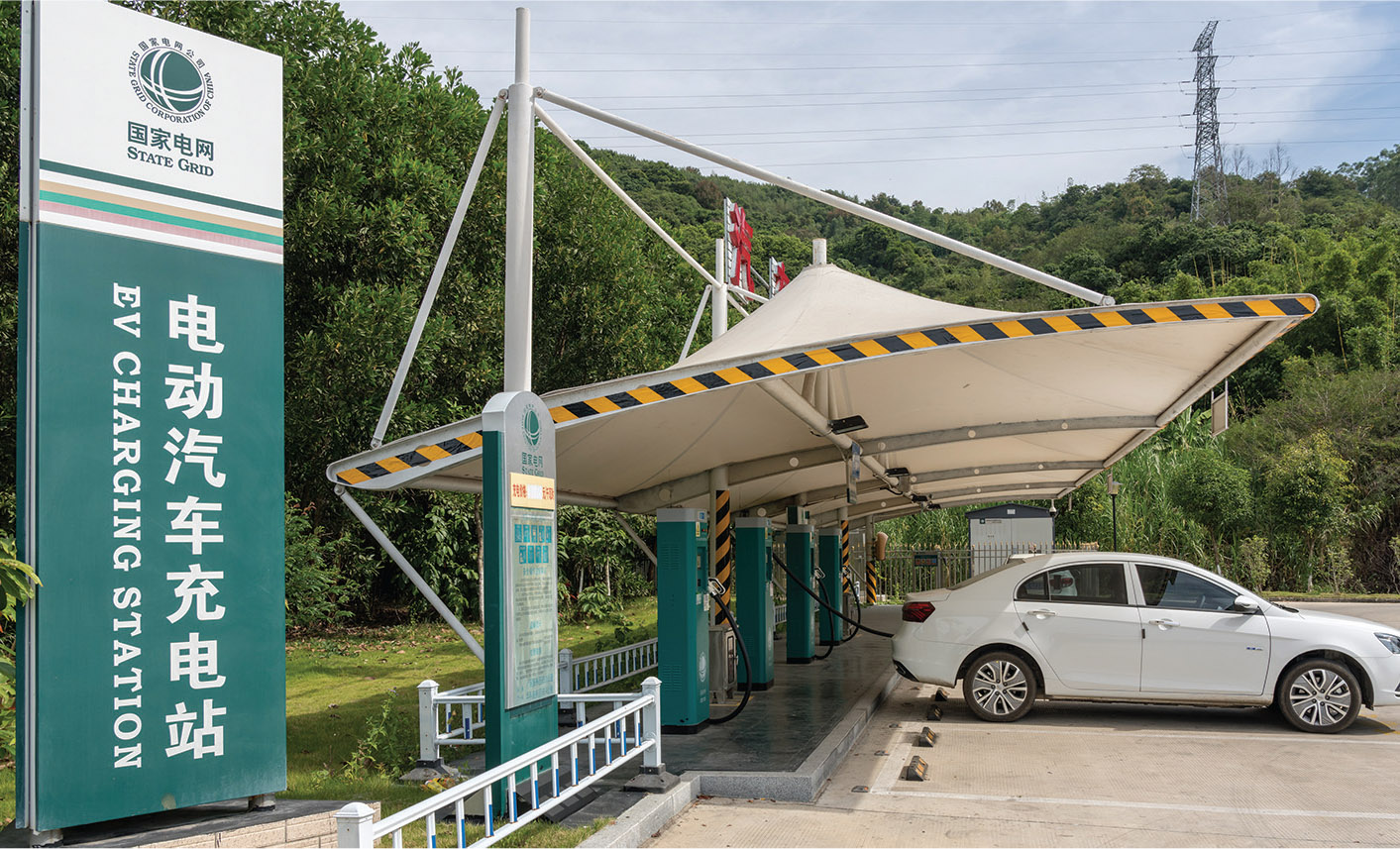 China has been taking various policy initiatives to promote clean energy. A key focus area in this regard has been the promotion of EVs. The country has been offering incentives such as subsidies, rebates, exemptions and tax benefits both at the national and provincial levels to incentivise consumers to purchase EVs.

In line with this, the government’s New Energy Vehicle Industry Development Plan (2021-2035) is being considered as a programmatic document for China’s new energy vehicle policy over the next 15 years. According to this plan, the competitiveness of EVs will significantly improve by 2025. EVs are expected to account for about 20 per cent of the total vehicle sales by 2025, or over 7 million vehicles annually by 2025. They could reach 40 per cent of new vehicle sales in China by 2030. The plan also envisages that EV sales may account for 30 per cent of the sales of autonomous intelligent vehicles by 2025.

With regard to charging infrastructure, according to the Chinese Electric Vehicle Charging Infrastructure Promotion Agency (EVCIPA), by January 2020, China had built 531,000 public charging points and 712,000 private ones. This means on average there was one charging point for every 3.5 EVs. As per China EV100 estimates, there will be 64.7 million EV charging points (public and private) in China by 2030.

Facing the Covid-19 pandemic, the country has displayed remarkable resilience, with grid developers making efforts to ensure the timely completion of various ongoing transmission projects. China has set ambitious goals for developing clean energy technology, which can only be fulfilled with strategic investment in advanced technological initiatives.