Rajasthan Rajya Vidyut Prasaran Nigam Limited (RVPN), established in 2000, is among the largest state transmission utilities in the country, with an expansive network, close on the heels of Gujarat, Maharashtra and Uttar Pradesh. It is also one of the few state transcos to establish a a transmission network at the 765 kV level as well as award intra-state transmission projects to private players via competitive bidding. Over the past few years, the utility has been investing in strengthening and augmenting the intra-state transmission system to meet the increasing electricity demand as well as to connect the generating plants with load centres. It is scaling up its investments significantly over the next couple of years to improve system parameters, accommodate intermittent renewable energy in the grid and meet the increase in peak load.

RVPN is responsible for intra-state transmission of electricity, development of new lines and grid substations at voltage levels ranging from 765 kV to 132 kV as well as maintenance and augmentation of the existing ones; and planning and coordination with the central transmission utility, the government, gencos, discoms and regional power committees.

With consistent transmission system augmentation, RVPN successfully reduced transmission losses from 4.11 per cent in 2014-15 to 3.33 per cent in 2019-20. At the same time, it maintained high levels of system availability at 99.7-99.9 per cent during the period. 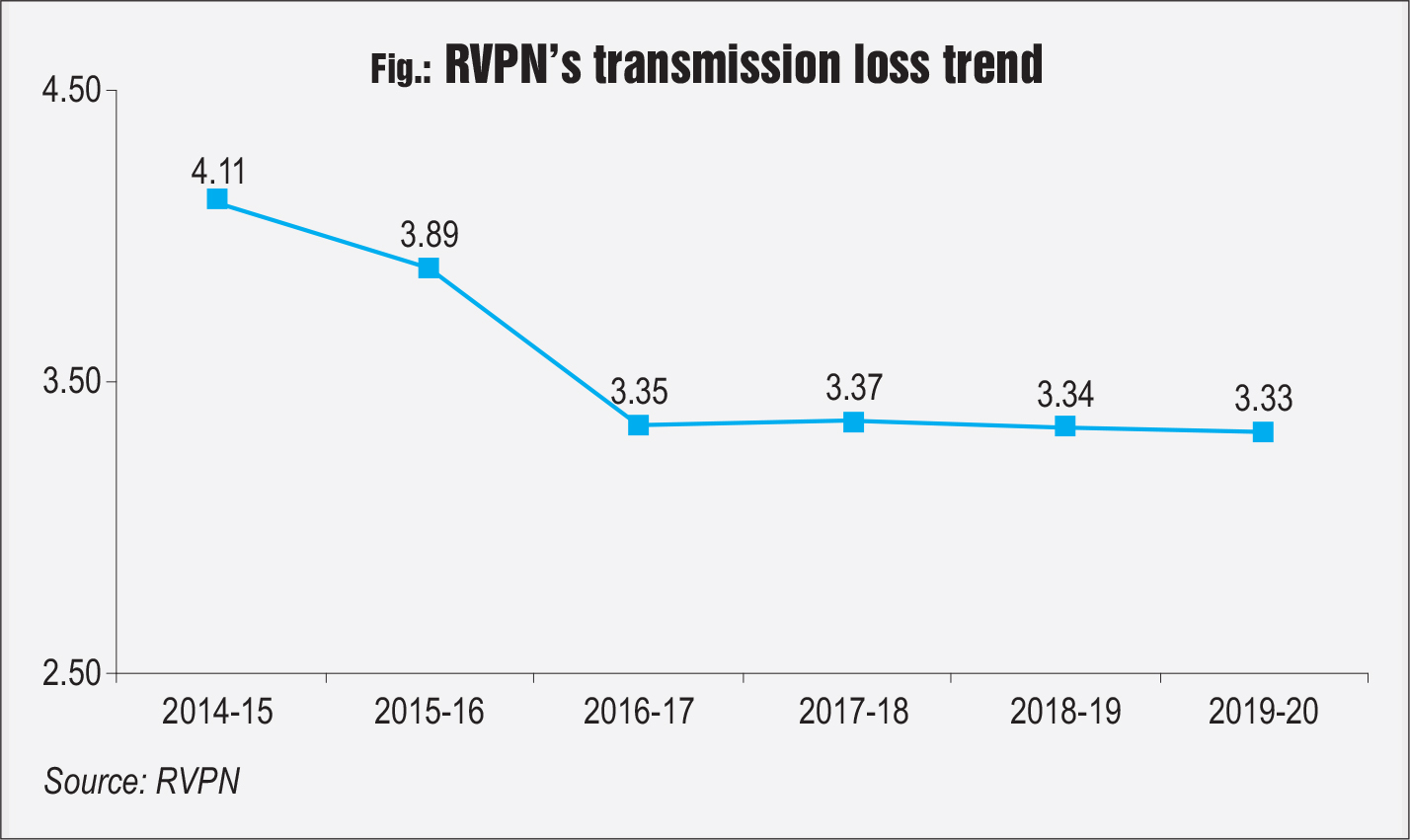 The company’s revenue during 2019-20 stood at Rs 34,132 million, an increase of 15 per cent from the Rs 29,698 million in the previous year. It recorded a net profit of Rs 1,467 million as of March 2020 vis-à-vis a loss of Rs 1,617 million in the previous year. RVPN’s total expenditure increased from Rs 31,315 million to Rs 32,664.8 million during the same period. Notably, finance costs accounted for a major share of 34 per cent in the total expenditure in 2019-20, followed by depreciation expenses at 28 per cent share and employee expenses at 26 per cent. The rest was accounted for by repairs and maintenance, administrative and other expenses.

During 2019-20, RVPN invested Rs 9,917 million on transmission infrastructure expansion. For 2020-21, an investment of Rs 15,470 million was approved by the Rajasthan Electricity Regulatory Commission, of which about Rs 3,850 million was incurred till October 2020.

RVPN’s proposed annual plan for 2021-22 earmarks an investment of Rs 16 billion. During the year, RVPN plans to add 633 ckt. km of transmission lines, seven substations, 3,320 MVA of substation capacity and several capacitor banks. The key projects include the installation of 3×500 MVA, 765/400 kV power transformers at the 765 kV Phagi grid substation along with associated bays, transmission system uprating and strengthening of renewable energy evacuation in western Rajasthan, establishment of a new 315 MVA substation at Jodhpur, completion of a the 491 ckt. km-400 kV D/C Suratgarh TPS-Babai (Jhunjhunu) (quad moose) line and augmentation of existing substations. RVPN is driven by the realisation that substation capacity augmentation is crucial for improving system parameters such as voltage and frequency profile for better power supply reliability and for reducing overloading of the existing transmission system. 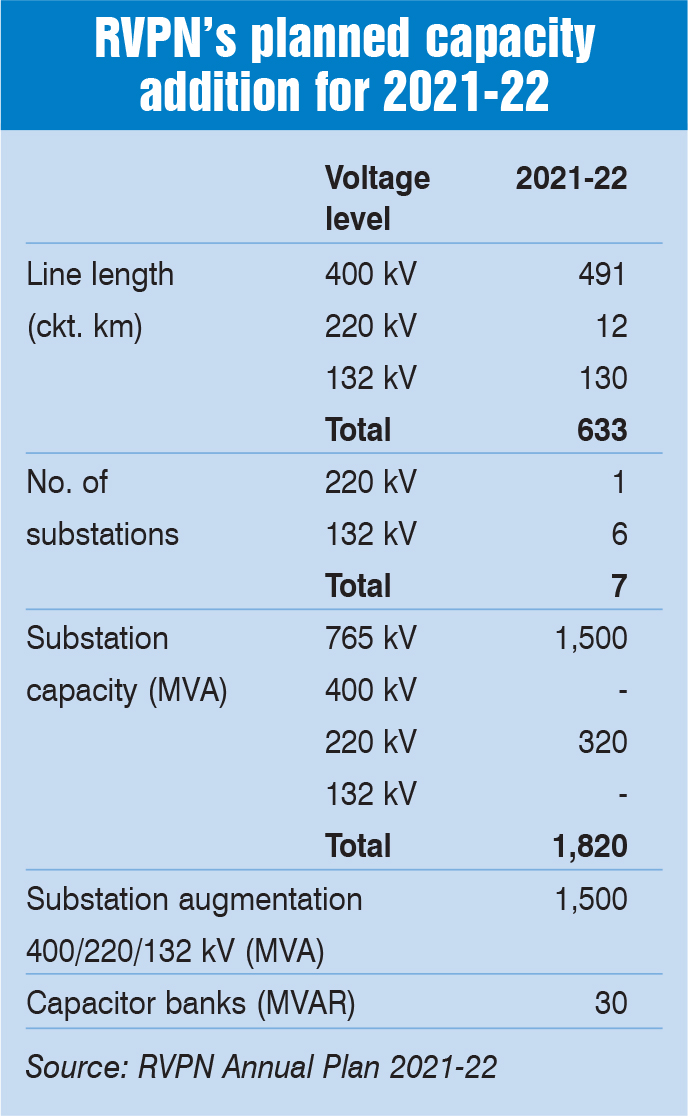 In addition, the transco is planning to add reactive power compensation systems to its network, in order to stabilise the grid in the wake of increased renewable energy integration. Due to renewable purchase obligations fixed by the state regulator, RVPN is expected to witness an increased transmission of renewable energy over the next two to three years, amounting to 2-2.2 GW annually. With the large-scale integration of renewable energy sources into the grid, reactive power reserves decrease as they displace the conventional synchronous generators, which makes the transmission grid vulnerable to instability. In addition, because of the intermittent and variable nature of renewable energy sources, the power system is likely to become unstable during system contingencies. It is, therefore, crucial for transcos to have a reactive power management strategy. To this end, RVPN is planning to install bus reactors at several grid substations at Anta, Heerapura, Ajmer, Bhilwara and Babai, with financing from REC Limited. It is also planning to install thyristorised controlled reactors (dynamic compensation) at substations in Jaisalmer, Bhadla and Bikaner, with proposed funding support from the Asian Development Bank. RVPN also plans to invest in smart infrastructure and renewable forecasting in the near future.

Going forward, RVPN plans to continue capacity augmentation to meet the expected rise in peak load. During 2019-20, Rajasthan recorded a peak load of 14,277 MW, which is expected to increase to 16,048 MW by 2023-24 and further to 20,131 MW by 2026-27. Net, net, RVPN is expected to lead from the front to help the state’s power grid manage the growing renewables’ integration as well as the rising energy demand.