However, given their inconspicuous nature, they are often neglected in policy discussions on sustainability, although efficient motors could reduce energy consumption and emissions while yielding economical benefits for the consumers. Therefore, it is of utmost importance that the government, consumers and financial institutions collaborate and devise a targeted policy, which includes financial and regulatory incentives to enable the replacement of inefficient and obsolete motors.

In India, the IS 12615 is followed which specifies the performance requirements and efficiency of three phase squirrel cage energy efficient induction motors. This standard was first published in 1989 and revised in 2004 and 2011. The standard prescribes three efficiency classes (IE1, IE2 and IE3) while IE4 is under consideration and proposed to be added later. 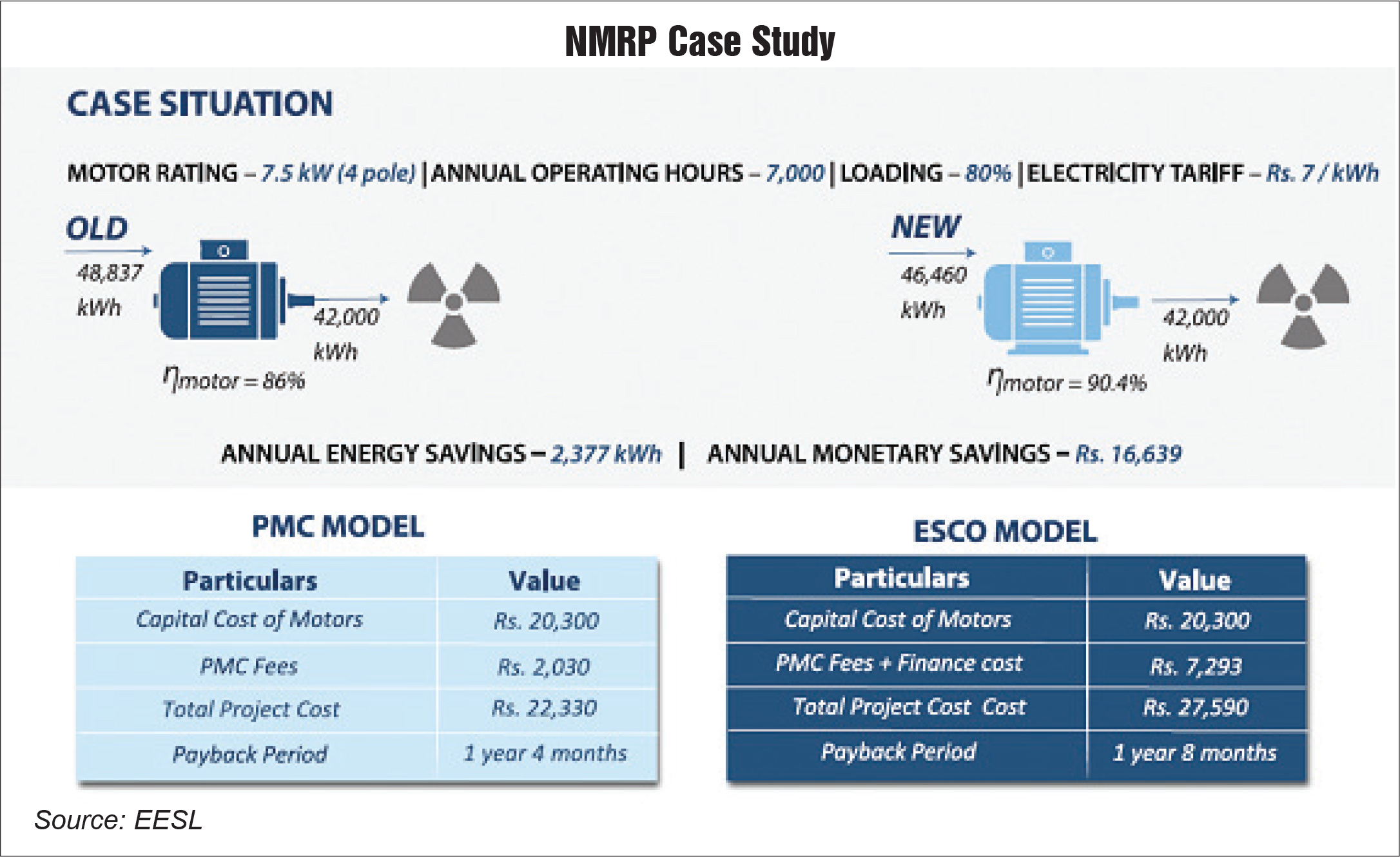 In India, the majority of the motors are energy-intensive and quite inefficient leading to issues such as elevated operational costs and high emissions from industries and power plants. It is estimated that 90 per cent of the currently installed motors are at the IE1 and sub-IE1 levels. In addition, these motors encounter frequent failures and require regular expenditure on their upkeep and maintenance, as the majority have been running for 15 years or more. The use of inefficient motors significantly increases the operations and maintenance costs of industrial units.

It is estimated that nearly 2 million motors are manufactured in India each year, and most of them are IE1 grade. In order to control this trend, the Department for the Promotion of Industry and Internal Trade issued a quality control order on August 1, 2018, mandating all imported and domestically manufactured motors to conform to the revised standard specified by the Bureau of Indian Standards. As per the order, motors need to conform to a base standard of IE2 three-phase motors at a minimum. 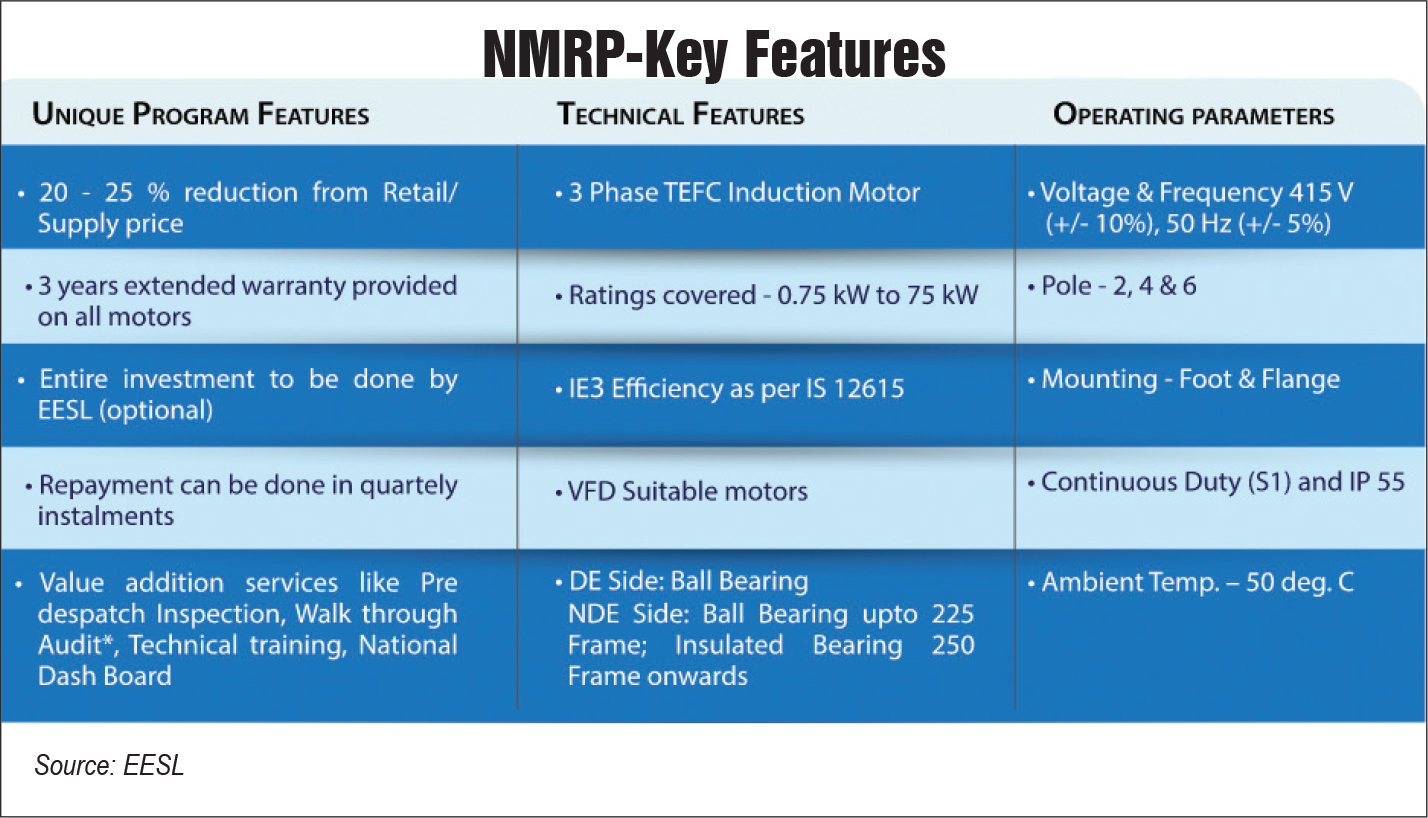 There are various financial and supply chain issues in the deployment of IE2 motors. The introduction of Mandatory Energy Performance Standards requires a financial architecture, institutional support and a robust supply chain ecosystem to expedite such a transition. In order to promote the adoption of energy efficient motors in industries, Energy Efficiency Services Limited (EESL), a public sector company, launched the National Motor Replacement Programme (NMRP) with the specific objective of funding the voluntary replacement of inefficient motors with IE3 motors (as per IS-12615). The programme targets the replacement of 120,000 motors in the first phase, with an aggregate annual energy savings potential of more than 5 billion kWh. The demand reduced by higher efficiency motors will be equivalent to 600 MW.

PMC model: In this model, the end-users will bear the entire investment cost, which is mainly the product cost. EESL will provide PMC support to the end-users through a project manager selected through open competitive bidding. This support includes inventory collection, procurement of motors and supply of motors to the site and finalisation of the scheme for replacement. The finalisation of the replacement scheme includes determining details about the number of motors to be replaced, an estimation of energy savings and the investment requirement.

ESCO model: In general, most of the customers interested in IE3-grade motors are unwilling to purchase them because of their high upfront and interest costs, and scepticism over the quality of higher-grade motors. Moreover, efficient equipment, after discounting for its high upfront capital costs, tends to yield benefits over a decade or so, which leads most buyers to prefer electrical equipment with lower upfront costs despite the higher lifetime costs.

EESL’s unique ESCO business model ensures a successful transition to more efficient motors and electrical equipment with its self-sustaining and virtuous financial cycle. By engineering a financially viable model, EESL strives to drive the adoption of efficient components. It allays consumer concerns about quality and performance by providing guarantee.

EESL primarily functions as an intermediary between willing buyers and sellers of efficient motors conforming to the IE3 standards. It aggregates the demand for motors pan-India from all buyers and issues a corresponding bulk purchasing tender, inclusive of quality standards. It then selects the seller with the lowest price offering, which, considering the bulk procurement, would be 10-20 per cent lower than the retail price, and supplies the motors to the industrial units.

These industrial units will pay the amount over three years. In line with the deemed savings method, the consumers will pay a certain percentage of the amount they saved on electricity bills by utilising these energy efficient motors. These energy savings are then monetised, of which a certain portion is repaid to the ESCO as EMI and the remaining is retained by the buyer. In this case, 20,139 kWh of energy savings translate into Rs 140,972 of monetary savings in electricity bills annually. The buyer of the motor pays 58.83 per cent of the energy savings (equal to Rs 82,933) as EMI to the ESCO, while retaining Rs 58,040. This process of repayment of a portion of the monetised energy savings is done for three years, after which the buyer can claim the full amount. This is a win-win proposition for all parties involved.

Recently, it was reported that the US-based Institute for Sustainable Communities (ISC) and EESL are looking at energy savings of $62 million annually under the NMRP. ISC has been an active partner of EESL right from conceptualisation and through the implementation of the NMRP, and is jointly executing the Energy Efficiency Alliance for Industry (E2 Alliance) Project in Asia. So far, the two entities have achieved energy savings of $7.3 million under the NMRP. The alliance is looking forward to unlocking an energy saving potential of 66.5 MUs, equivalent to $62 million annually, by replacing old and inefficient motors. Since its launch, the E2 Alliance has enabled 6,520 motor replacements and created a pipeline of 48,818 motor replacements.

In June 2021, EESL and MECON Limited announced that they will work collaboratively for the implementation of various energy efficiency and resource conservation measures in the steel sector and the associated mining industry. Through this partnership, EESL and MECON aim to jointly address solutions such as retrofitting LED lights and deploying energy efficient motors (IE3 type) in place of conventional motors.

In 2019, Tata Motors commissioned an energy management system in collaboration with EESL at its Pantnagar, Lucknow and Pune plants, with EESL ploughing in its own funds. These measures included the replacement of old motors with IE3 motors, the installation of smart meters and the installation of LED lights and other energy efficient appliances. An audit of its electricity consumption from May 2019 to January 2020 showed that these measures reduced electricity consumption by 57 per cent to 14,300 kWh from 33,000 kWh.

Motor manufacturers are leveraging new-age advanced technologies to meet the industries’ requirements in terms of digitalisation. The newer generation of motors and drives incorporate features such as data analytics, IoT and real-time monitoring, which help in a more efficient utilisation of motors. Smart motors are an emerging trend. They can send the data directly to the IoT platform.

In an electric device with motors and drives, there are several other components that are operating at the same time. A motor current signature analysis, temperature and vibration monitoring can be combined to deliver real-time performance metrics. This can provide instantaneous and short-period performance comparisons to flag predictive and preventative maintenance needs. Real-time monitoring provides unequivocal information on the functioning of these systems and identifies inconsistencies to determine electrical and mechanical faults.

Predictive and preventative maintenance helps in enhancing the life of the machine by pre-empting the faults. On a day-to-day basis, real-time data acquisition helps in maximising the operational efficiency of the machines by regulating excessive torque and speed to optimise operation with minimal wear and tear.

Although motors and drives account for a major portion of electricity consumption, the consumers continue to use the sub-IE2 owing to their low upfront cost of installation. The government, consumers and manufacturers of motors and the financial institutions must collectively endeavour to enable this transition by means of regulations that incentivise the replacement of old motors.