The central government has undertaken various programmes and initiatives for implementing smart metering across the country. These include the National Smart Grid Mission (NSGM), the Smart Meter National Programme (SMNP), the Integrated Power Development Scheme (IPDS), the Ujwal Discom Assurance Yojana (UDAY), and the recently launched Revamped Distribution Sector Scheme. As of August 20, 2021, a total of 11.16 million smart meters have been sanctioned under these schemes, of which 2.7 million have been deployed and 8.46 million are in the pipeline.

Established in 2015, the National Smart Grid Mission (NSGM) aims to accelerate the deployment of smart meters in India. The programme has been in operation since January 2016, and as of now, 52,270 smart meters have been installed out of the 723,433 sanctioned. In July 2021 alone, over 8,000 smart meters were installed under the NSGM across the country.

Four smart grid projects have been sanctioned under this programme and are at various stages of development. These include the projects to be developed in Subdivision 5 of Chandigarh (under the Chandigarh Electricity Division (CED)), in the entire city of Chandigarh, excluding Subdivision 5 (under CED), in Ranchi city (under Jharkhand Bijli Vitran Nigam Limited (JBVNL)) and in six towns under Jaipur Vidyut Vitran Nigam Limited (JVVNL). 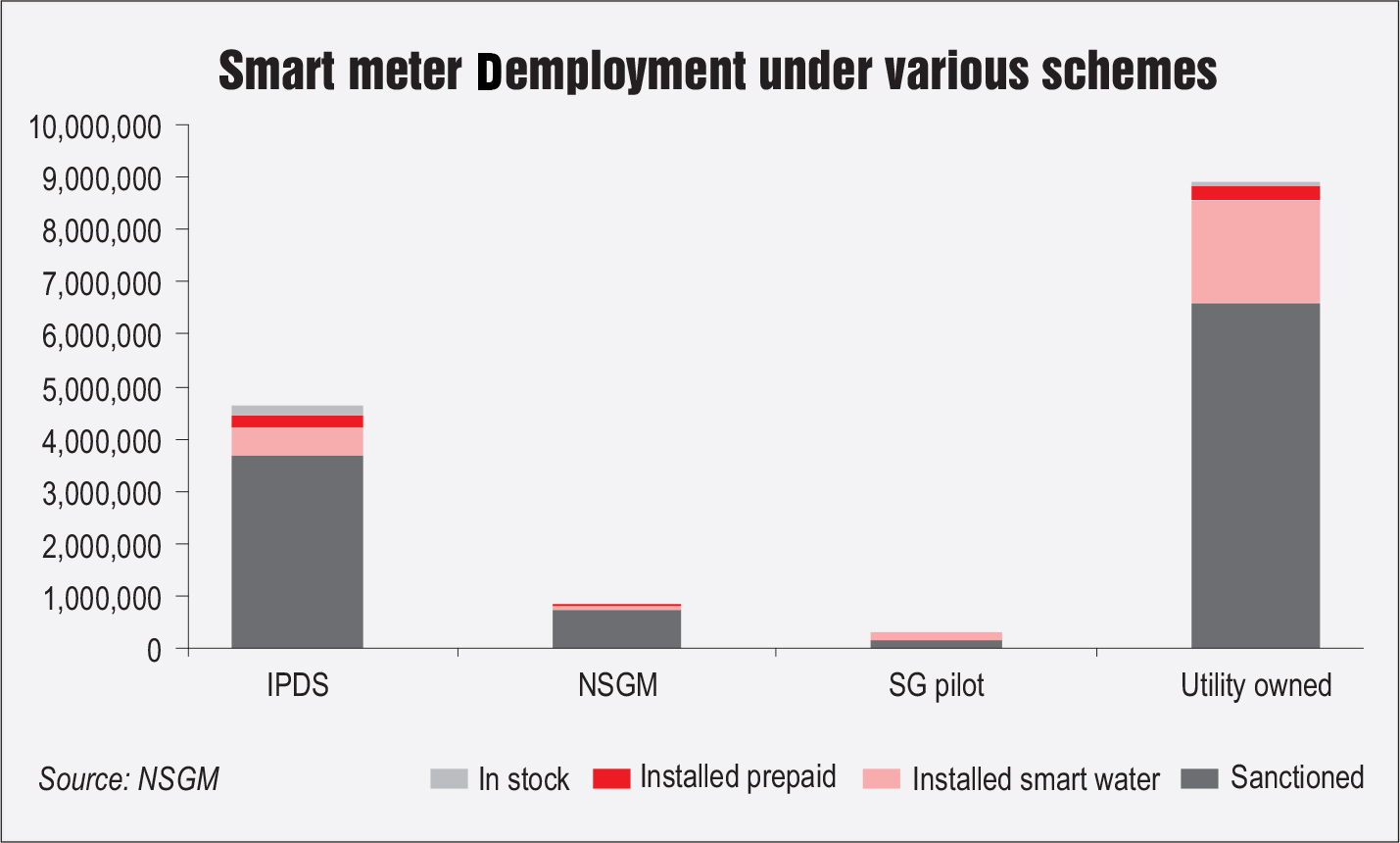 As of July 2021, 10,512 smart meters have been installed by CED in Subdivision 5 to cater to 29,433 consumers, and JVVNL has installed 31,118 smart meters to cater to 0.15 million consumers. For the project to be implemented in the rest of the city of Chandigarh, a revised sanction is under approval with the Ministry of Power (MoP). For the project under JBVNL, technical evaluation has been completed, and the report has been submitted to the World Bank for approval. The projects entail the deployment of smart meters, automated metering infrastructure, distribution transformer monitoring units, enterprise resource planning, and supervisory control and data acquisition systems.

The SMNP is being implemented by EESL and aims to replace 250 million conventional meters with smart meters in India. Under the programme, EESL will bear all the capital expenditure and operating expenses, that is, the states and utilities are not required to invest upfront. EESL has signed agreements for smart meters with Andhra Pradesh, Uttar Pradesh, Haryana, Bihar, the New Delhi Municipal Council, Rajasthan and Telangana, and for prepaid meters with  Uttar Pradesh and Tripura. EESL has also entered into a joint venture with the National Investment and Infrastructure Fund and IntelliSmart Infrastructure Private Limited to implement, finance and operate the smart meter roll-out programme for discoms.

As per the SMNP dashboard accessed in August 2021, around 1.57 million smart meters have been installed, and the average discom revenues increased by 20.5 per cent, amounting to an increase of Rs 301 per month per meter. Aggregate technical and commercial losses were reduced by 11-36 per cent on average. Billing efficiency improved by 21 per cent, and total revenue increased by Rs 2.64 billion per annum for about 1.1 million smart meters. 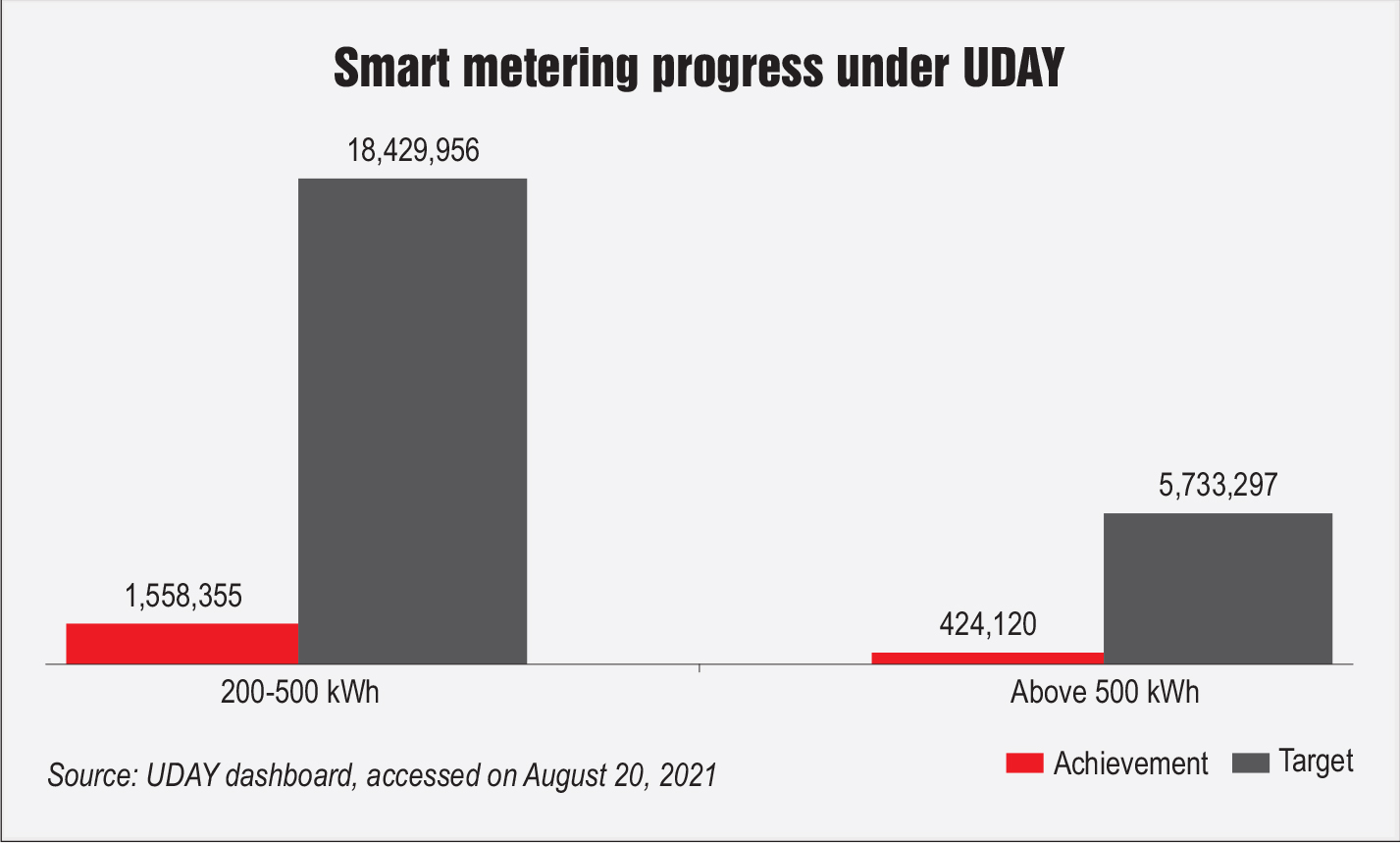 The Integrated Power Development Scheme (IPDS) was notified by the MoP on December 3, 2014. According to the latest data from the IPDS portal, for smart metering, the total approved project cost and project management agency (PMA) cost are around Rs 3.86 billion and the total government grant approved is Rs 2.39 billion, of which Rs 381.7 million has been released.

The MoP has also approved smart metering projects under the IPDS based on improved performance parameters under UDAY. The total outlay for this is Rs 8.34 billion. The states have made detailed project reports with IPDS funding admissible for the capex portion (the cost of smart meters, head-end system (HES) and communication equipment) limited to a maximum of Rs 2,000 per node. 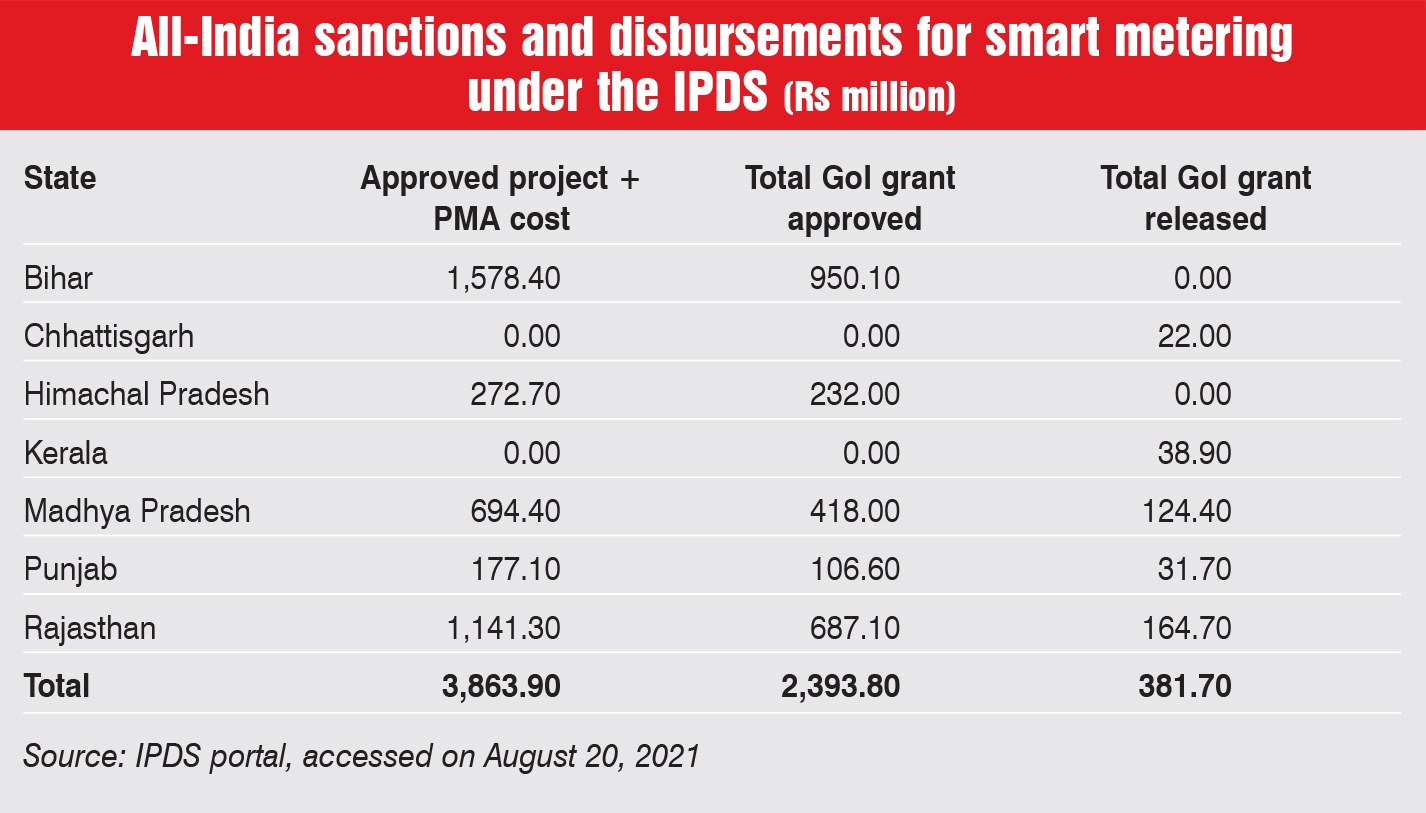 The main challenge in the deployment of smart meters is that these devices are not just hardware components but require an entire infrastructure, with all the associated processes, from meter reading to billing and payment, to be automated. Additionally, utilities need to adopt a communications system that can be remotely and securely updated. Integrating data from smart meters with the HES, the meter data management system, and the billing and collection software is an issue. The entire process has to take place seamlessly through the communication backbone and be automated through cloud-based services. However, given the government’s focus on smart metering and the benefits realised through the existing installations, it is likely to pick up pace in the near future.