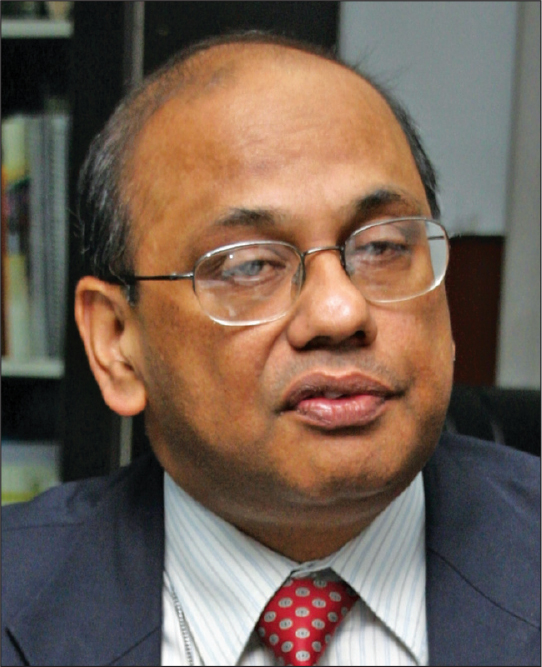 In 25 years, renewables plus storage will be the dominant generation source, believes Dr Ajay Mathur, director general, International Solar Alliance (ISA). While fossil fuel capacity will continue to serve as baseload, by 2030, the growth in renewables plus storage will lead to a plateauing in the fossil fuel capacity. Excerpts from a recent interview with Power Line…

What has been the biggest change in the power sector during the past 25 years?

There have been three key changes in India’s power sector in the past 25 years. First, there is no longer a scarcity of power generation. Second, the transmission systems have become extremely good and we have attained “One Nation, One Grid, One Frequency”. Both these developments have, in turn, helped in addressing the issue of power outages. Third, energy efficiency has become a mainstream activity.

What has been achieved in the area of energy efficiency? What more can be done?

As far as electricity appliances are concerned, the star rating programme has been very effective in influencing consumer behaviour. The Perform, Achieve, Trade (PAT) programme has been quite effective in bringing down energy consumption, particularly for large industries. There are, however, two areas where a lot of work needs to be done. One is the building sector, where we need strong political will and leadership to impro­ve energy efficiency. The second is micro, small and medium enterprises (MSMEs), which have been relatively energy inefficient. It would be helpful if there is a structured programme for introducing energy efficiency initiatives in MSMEs.

What are the biggest challenges facing the power sector?

The major challenge lies in providing adequate and affordable electricity to all, at all times. While neither generation nor transmission is a problem, the distribution segment needs attention. Therefore, an overarching challenge is: how do we get the distribution companies to focus on service-level issues so that electricity becomes affordable even in rural areas, and inverters and diesel generators become a thing of the past? We need solutions that are in the interests of the state governments and consumers, as well as the electricity distribution companies. However, different state-wise strategies are required and we cannot have a one-size-fits-all approach.

What are the biggest changes that will take place over the next 25 years?

One of the trends that has started happening, and will unfold to a larger extent over the next 25 years, is the move towards renewables, particularly renewables plus storage. Over the next five years, a range of solutions will emerge, including battery storage solutions and connectivity between countries, so that when it is night (dark) here, we can im­port green electricity from the Gulf co­un­tries where there is daylight. Fossil fuels will possibly disappear over time, and we will see a ramping up of solar plus ba­­tt­ery capacity over the next 30 years. Overall, 25 years from now, we will be seeing a po­­­wer sector in which renewables plus storage will be the dominant generation capacity.

“Solar electricity and green hydrogen will be the two pillars of the energy economy of tomorrow.”

What will be the biggest challenges for the power sector in the next 25 years?

First, if distribution reforms do not occur, we will see the emergence of a lot of fragmented electricity distribution systems. In the industrialised states, say, Tamil Na­­du or Maharashtra, private sector manu­­fac­turers will start to secure a lot of rene­wable energy that is available in the other states in order to comply with the “embodied CO2” requirement of countries to which the industries export their product. Another thing that will occur, particularly in the rural areas where there is a lot of electricity demand for agricultural irrigation, is that solar power stations will be built within the compound of rural substations. This is already happening in Maharashtra. Evidently, bringing grid electricity to rural substations in Maha­rashtra costs Rs 7.48 per unit, while electricity can be generated on-site at a rural substation at Rs 3 per unit.

Second, as a lot of renewable energy is coming in, issues related to its manage­me­nt will emerge. An important conce­rn is that the electrical engineering cu­rri­­cula in all engineering colleges focus on machines, but there are no ma­chines in solar energy.

What will be the role of other renewable en­ergy sources apart from solar power?

We are already seeing in many parts of the country, Karnataka being a prime example, that solar and wind together are able to provide a fairly flat electricity profile. So, we will see wind complementing solar in a lot of areas; and solar-wind hybrids will provide more reliable electricity supply.

The other focus area in the renewable energy segment will be biomass. How­ever, the highly fluctuating price of biomass makes electricity generation non-competitive. As more and more cities run out of landfill areas, we will see in­cen­tives being offered for setting up biomass-based power generation plants.

What will be the role of conventional sources of power going forward?

What is your perspective on green hydrogen?

Green hydrogen, and especially solar hy­drogen, has huge potential; however, its cost currently exceeds $5 per kg. Mean­while, the hydrogen that is used in fertiliser plants and refineries, made by the re-formation of natural gas, costs less than $2 per kg. The challenge is, how qui­ckly can we move from $5 to $2 per kg? Today, there are very few electrolysers in the world, and their performance is poor. As volumes increase, their performance will increase and green hydrogen prices are expected to decrease. I expect that solar electricity and green hydrogen will be the two pillars of the energy economy of tomorrow.

What is your perspective on electric vehicles (EVs)?

EVs, even today, are more cost effective than fossil fuel-based vehicles. People who do not buy electric two-wheelers att­ri­bute their reluctance to the lack of adequate char­ging stations. Establishing and showing that charging infrastructure ex­ists is very important. As per our estima­tes, we can have a very dense network in cities at less than Re 0.02 per unit. That said, other behavioural challenges still re­main. As far as cars are concerned, there is still a race going on between electric cars and hydrogen-based fuel cell cars.

What are your views on climate change? What should be our goals and strategies?

With climate change, we are seeing spikes in temperature, rainfall, cyclones, etc. Although the total number of such events has not increased, their intensity certainly has. The world needs to manage these risks, and reduce greenhouse gas emissi­o­ns. The power sector needs to move away from fossil fuels. India has done extremely well in building up solar en­ergy in a very short time. Between 2012 and now, we have picked up over 50 GW of solar capacity. However, the lack of international cooperation is a bottleneck in augmenting renewable energy capacity in the country. Last year, around $150 billion was invested in renewables, of which only $6 billion ca­me to India, and less than $1 billion went to Africa. This is largely because investors see risks in these countries.

What have been the key achievements of the ISA so far? What are you hoping to achieve in the next few years?

In the four years of its existence, the ISA has already gained international credibility and has 98 member countries. We have been able to influence solar deve­lop­ment in a lot of countries throu­gh our capacity building programmes. One of the key issues faced by ISA member co­untries is developing solar projects. We have requests for developing 4.5 GW of solar projects from across our member countries, and we already have third parties to do independent validation of these projects and undertake prefeasibility studies. The next step is to find funding for these projects.

The ISA is putting in resources as via­bility gap funding to help these projects take off. As these projects take off, the leaders of the countries will see the benefits and serve as agents for change in policies and processes. Another major goal is to connect regions of the world so that green electricity can flow across co­untries from where sun is still shining strong to areas where the sun has set – say from India to East Asia, or between Africa and Europe, or between Australia and Singapore – under our “One Sun, One World, One Grid” initiative.

The coal sector in India has witnessed a number of reforms in the past two to three years leading to a massive transformation of the sector. With record production on the one hand and a […]

Financing activity in the power sector remained subdued in the past year. Although the sector has showed some improvement owing to several government initiatives such as the Ujwal Discom Assurance Yojana (UDAY), the Integrated Power […]

Record Additions: Share of renewables surpasses that of hydropower

Renewable energy has experienced tremendous growth in the past one year, with its cumulative installed capacity surpassing that of hydroelectric power. As of March 2017, the country’s total renewable energy capacity stood at around 52 […]