At the 26th Conference of Parties (COP26) of the UN Framework Con­­­vention on Climate Change (UNFCCC), held at Glasgow, Scotland, India reiterated its commitment to mitigating climate change and decarbonising the economy. It announced a net-zero emissions target for 2070, backed by strong near-term goals to increase the reliance on renewables and reduce the carbon intensity of the economy.

India has set a target to augment non-fossil fuel electric capacity to 500 GW and meet 50 per cent of its energy re­quirements from renewables by 2030. Besides this, it has pledged to cut carbon emissions by 1 billion tonnes (bt) by 2030, setting for the first time a target in terms of absolute emissions cuts. It has also committed to lower the emissions intensity of GDP by 45 per cent by 2030.

Notably, the new targets are a level up from India’s previous Intended Natio­na­lly De­termined Contributions to the UNFCC, wherein it had committed to re­du­ce the emissions intensity of GDP by 33-35 per cent over the 2005 levels and achieve about 40 per cent electric power capacity from non-fossil fuels by 2030.

India’s non-fossil fuel capacity target of 500 GW by 2030 at COP26 is in line with the capacity projection under the Cen­tral Electricity Authority’s (CEA) Optimal Ener­gy Mix up to 2029-30. The CEA estimates suggest that the country’s non-fossil fuel capacity will reach around 504 GW by 2030, in­cluding 72 GW from hy­dro, 263 GW from solar, 140 GW from wind and 10 GW from biomass sources. Notably, the pow­er ministry is expected to soon release renewable purchase obli­gations (RPOs) till 2030, keeping in view the 500 GW renewable energy target. The new RPOs are likely to include 70-100 GW of hydro­power and 450 GW of solar and wind energy.

Undoubtedly, renewable energy capacity is expected to be scaled up in a big way in the coming years; however, in­d­us­­try experts believe that coal-based power will continue to feed the growing energy need in the next five decades and is expected to peak only in 2040. Coal reti­rement is not foreseen beyond the normal end of life of power units. How­ever, the utilisation of coal-based units will be reduced and several units will need to cycle more frequently.

The 1 bt reduction in projected emissions until 2030 is a leap forward in the country’s decarbonisation journey. This is the first time that India has set a target in terms of absolute emissions. Its CO2 em­issions stood at 2.88 bt in 2020, and in a business-as-usual (BAU) scenario (considering the median annual rate of change during 2010-19), these are projected to reach 4.48 bt in 2030, as per the Centre for Scie­nce and Environment (CSE). A 1 bt reduction in CO2 emissions will require a 22 per cent re­duction in emissions in a BAU scena­rio. Meanwhile, in per capita terms, the country would be emitting 2.31 tonnes by 2030 following a 1 bt re­duc­tion in emissions, as against 2.98 to­n­n­es of CO2 per capita in a BAU scenario. Not­ably, India’s per capita consumption wo­uld be significantly low­er than the estimated per capita CO2 emissions in 2030 by the US (9.42 tonnes per capita), the European Union (EU) (4.12 tonnes), the UK (2.7 tonnes) and Chi-na (8.88 tonnes).

At COP26, India also pledged to reduce the emissions intensity of its economy by 45 per cent, a more ambitious target than the previous goal of a 33-35 per cent cut from the 2005 level by 2030. This requires enhanced measures to reduce emissions from the transport se­c­tor, the energy-intensive industrial se­c­tor, etc. As per the CSE, India achie­ved 25 per cent emission intensity re­duction of GDP between 2005 and 2016, and is on the path to achieve more than 40 per cent by 2030.

With the recent pledge for net zero by 2070, India has joined over 125 countries that have committed to net-zero emissions. India is the fourth-largest emitter of carbon emissions, after China, the US and the EU. However, the country’s per capita emissions are far behind those of the US, China and the EU.  Although the 2070 net-zero target falls behind the 2050 commitment made by the US and Eu­rope, and the 2060 commitment ma­de by China and Saudi Arabia, it is a significant target for a developing nation. The developed countries have used fossil fuels to power their industrialisation for centuries and, therefore, have more re­so­urces available now to transition away from them. 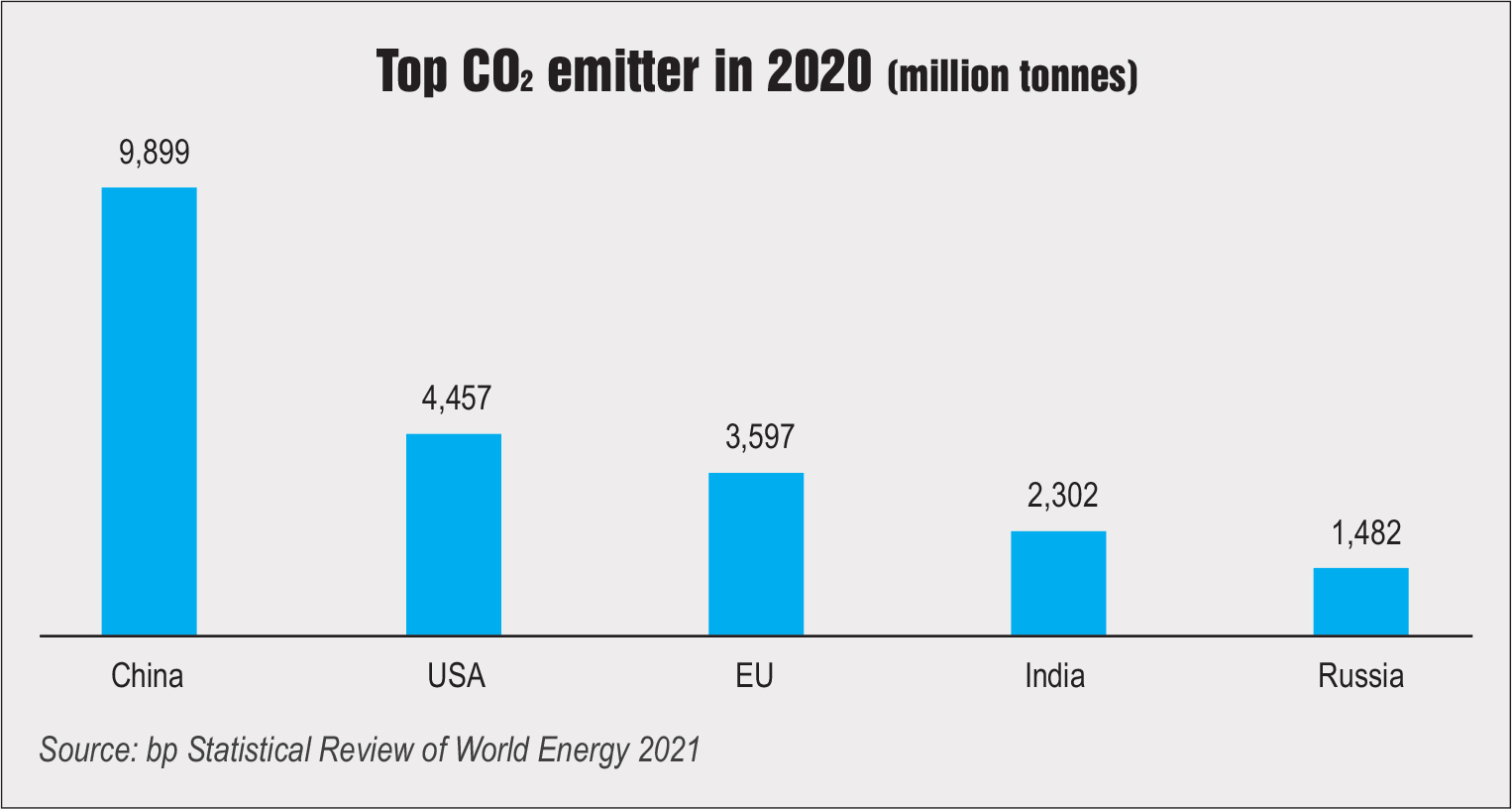 A  study, “Implications of a Net-zero Tar­get for India’s Sectoral Energy Transi­tions and Climate Policy”, published by the Council on Energy, Environment and Water, notes that India’s total ins­tall­ed solar power capacity would need to increase to 5,630 GW to achieve net-zero CO2 emissions by 2070. Fur­ther, the report highlights that to achieve a net-zero target by 2070, the use of coal, especially for power generation, would need to peak by 2040 and decline by 99 per cent between 2040 and 2060. Mean­while, the consumption of crude oil, ac­ross sectors, would need to peak by 2050 and fall by 90 per cent between 2050 and 2070. Green hydrogen could con­tribute 19 per cent of the total energy needs of the industrial sector. These insights as­sume that hydrogen would play an integral part in this transition. Further, the report notes that if India were to att­ain net-zero emissions by 2070, the eco­no­mic cost of the transition could be ar­ound 4.1 per cent of GDP in the net-zero year. A breakth­ro­u­gh in carbon capture and storage technology could help redu­ce the economic cost of the transition.

Another notable achievement of COP26 is the launch of the “Green Grids Ini­tia­ti­ve – One Sun One World One Grid” (GGI-OSOWOG) at the conference’s World Leaders Summit. GGI-OSOWOG, being spearheaded by the governments of India and the UK in partnership with the Inter­national Solar Alliance (ISA) and the World Bank Group, aims to harness solar energy wherever the sun is shining, ensu­ring that the electricity generated flows to areas that need it most. To help deliver the vision of One Sun One World One Grid, 80 countries have resolved to combine their efforts to create more interconnected grids, en­dor­­sing the One Sun Dec­laration, which will focus on building new transmission lines, crossing frontiers and connecting different time zones, creating a global ecosystem of interconnected renewables that are shared for mutual benefit and global sustainability. The ISA aims to help mobilise $1 trillion of funding by 2030 to assist developing countries in expanding their solar power grids, both in transmission and generation, to meet their energy needs. 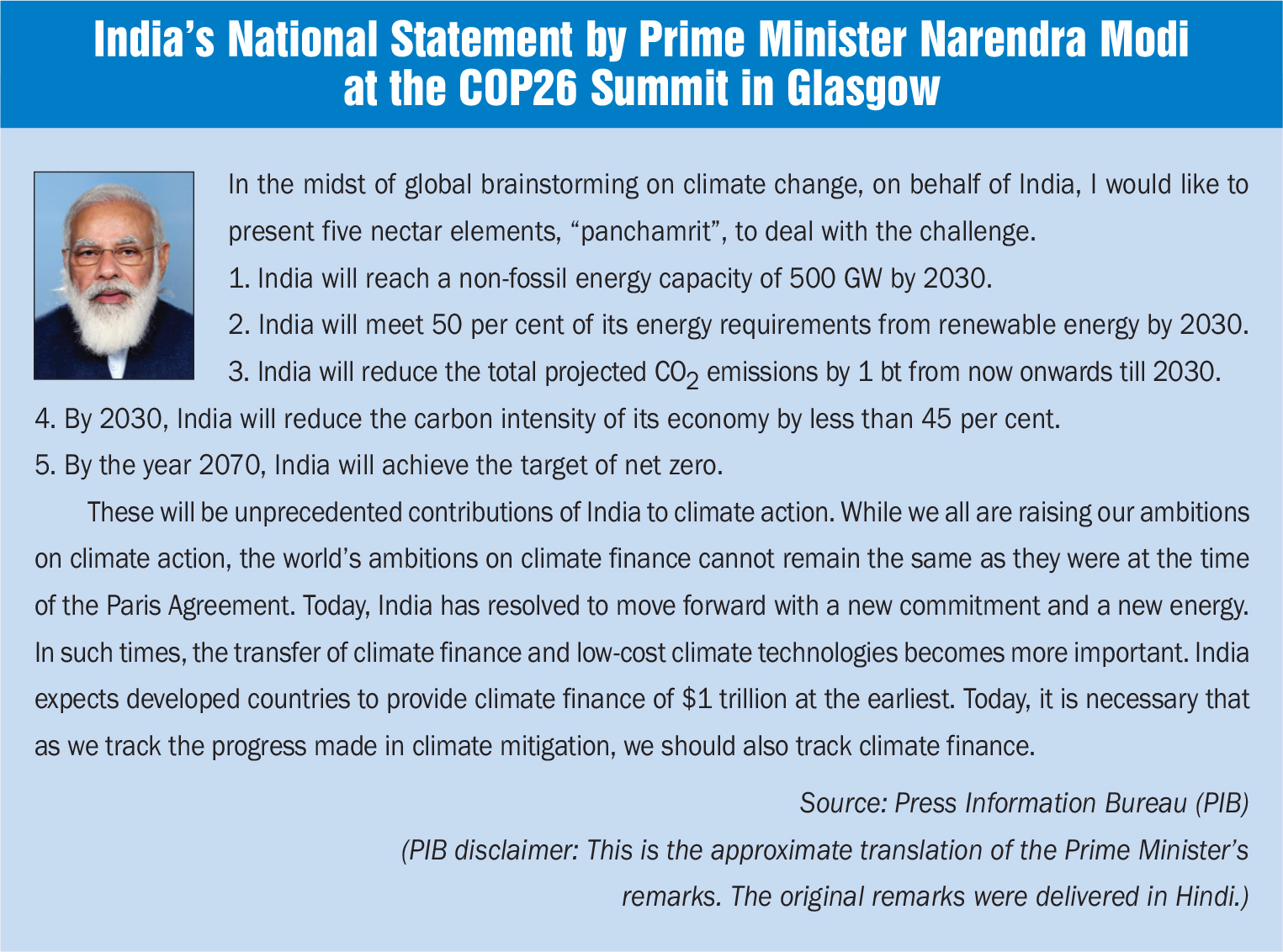 Meeting the climate change commitments made at COP26 by India hinges, to a large extent, on the availability of clima­te finance. India has sought clima­te fin­an­ce of $1 trillion from the developed na­tions at the earliest for meeting its commitment. “The increase in the rene­wable power capacity target for FY2030 to 500 GW from 450 GW earlier will stren­gthen the investment prospe­cts in the renewable energy sector. This represents a fivefold increase from the current capacity of 101 GW and would entail in­vest­ments of more than $300 billion, ap­art from additional investme­nts in augmenting the evacuation infrastructure and building storage capabilities,” says Sab­ya­sachi Ma­jumdar, senior vice-president and gro­up head, corporate ratings, ICRA Li­mited. The availability of adequate fun­ding is one the critical aspects to achieving these targets, he adds. 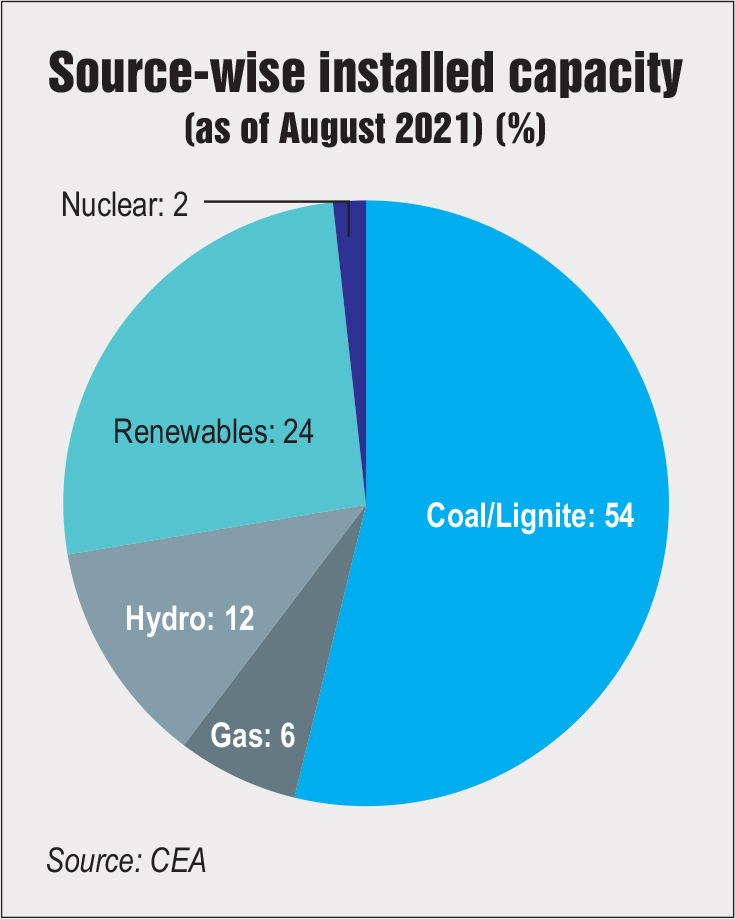 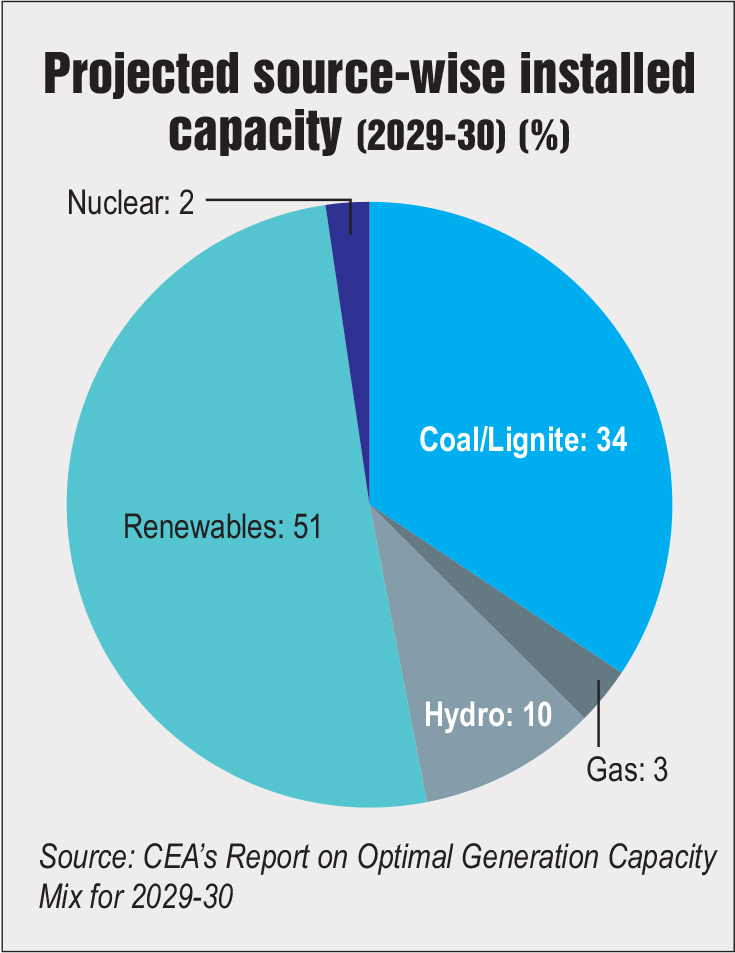 One of the draft agreements on the decisions proposed at COP26 notes that the current provision of climate finance is insufficient to respond to climate chan­ge impacts in developing countries and urges developed countries to provide financial resources in continuation of their existing obligations. It emphasises the need to mobilise climate fin­ance from all sources to reach the level needed to achieve the goals of the Paris Ag­ree­ment, including significantly en­han­ced support for developing countries beyond $100 billion per year. It calls upon the private sector, multilateral development banks and other financial institutions to enhance finance mobilisation.

While India’s commitment to achieving net zero by 2070 is a landmark announ­cement, the nearer-term targets of inc­reasing the share of non-fossil fuels and lowering carbon emissions by 2030 are more tangible and realistic. Explains Dr Rahul Tongia, senior fellow, Center for So­cial and Economic Progress, “Pri­me Mi­nister Modi’s pledges at COP26 were more than just for net zero by 2070, but the headline pledge is unlikely to dramatically change much for the electricity sector in the short run, for several reasons. First, the obvious observation that 2070 is five decades away, while po­wer in­frastructure is typically planned for ab­out three decades. A more relevant reason for limited short-term change is the fact that the additional pledges by 2030, such as raising capacity that is not from fossil fuels, do not change India’s actions much, but rather simply deepen them. The first and foremost action that this requires is increasing the installed capacity of renewable energy by 2030. This was already in full swing, and no additional target would change the on-ground realities that integration and finance are the two real needs to achieve any high renewable energy system by 2030, regardless of whether this was 350 GW or 450 GW or 500 GW.”

However, there is a need for clarity on various technical details of the country’s climate change targets. It is not immediately clear if the 2070 net-zero target refers to only CO2 emissions, or to emissions of all greenhouse gases. “The 2030 targets are much more ambitious when we think about producing half the energy from renewable energy.  We still await clarifications on whether this is total renewable energy or only energy within the electrical sector. Ei­ther way, this requires vastly more scaling up,” says Tongia.

Overall, India’s pledge at COP26 has levelled up its commitments for decarbonising the economy and expanding rene­wable energy. However, the availability of adequate climate finance, clarity on climate targets and on-the-ground im­ple­mentation are crucial for achieving the goals.