Co­m­­pany Limited (BSPTCL) has re­cor­ded impressive progress over the past five years, with its line length and substation capacity growing at a co­mp­ound aggregate growth rate (CAGR) of 10 per cent. The transco, formed after the restructuring of the erstwhile Bihar State Electricity Board in November 2012, has come a long way. BSPTCL is responsible for intra-state transmission and wheeling of electricity in the state of Bihar and has an expansive network of 15,267 ckt. km of lines, 146 grid substations and a transformation capacity of 23,110 MVA, as of March 2021. The utility has been working on several initiatives to expand its transmission network to ensure timely execution of projects, and to deploy new technologies. 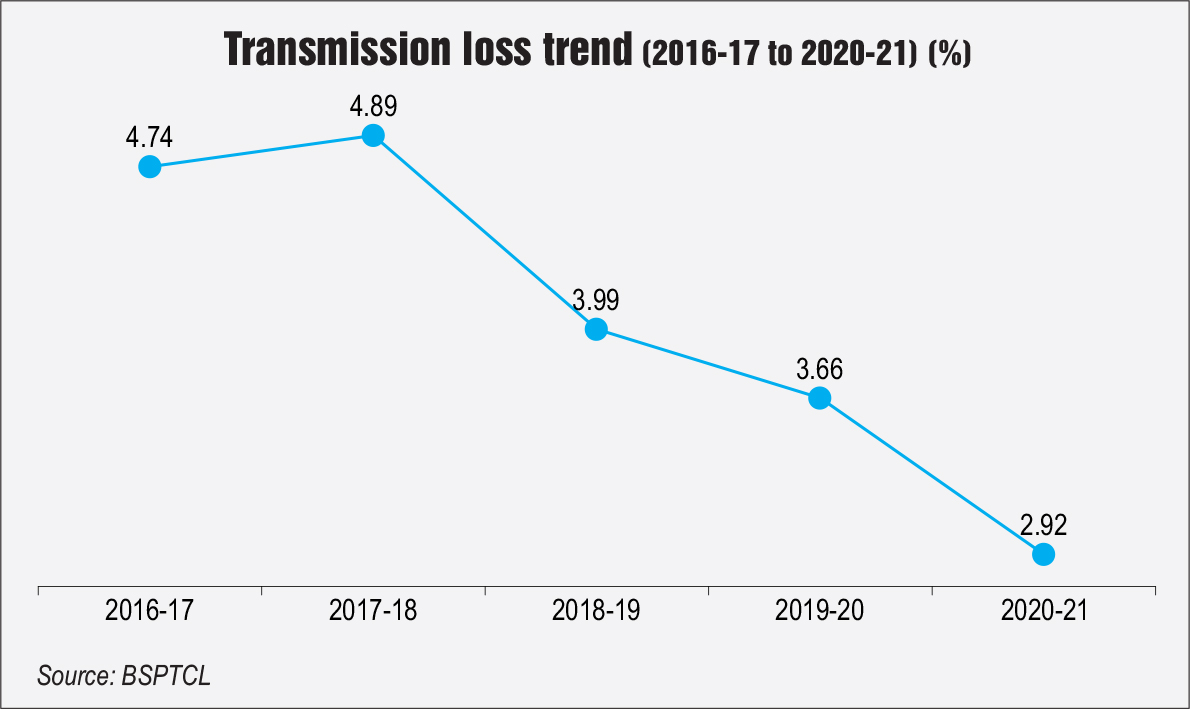 BSPTCL has performed well financially over the past years, consistently recording profits. Its total income stood at about Rs 11.7 billion in 2019-20, increasing marginally from the previous year. In the same period, its profit increased by over 200 times to reach Rs 4.6 billion as of March 2020. Meanwhile, the transco’s capex stood at Rs 138 billion as of 2020-21, recording a decline of about 18 per cent over Rs 169 billion in the previous year. The capex was approved by the Bihar Electricity Regulatory Commis­sion in an order on true-up for 2019-20, the annual performance review of 2020-21 and the annual revenue requirement of 2021-22.

The utility has adopted various new technologies such as substation auto­ma­tion for modernising its fleet of substations. Moreover, steps have been taken to lay optical ground wire, high temperature low sag conductors, and long rod polymer insulators for better operational efficiency in the network. The company has also undertaken geographical information system mapping of all its operational and under-construction grid substations in order to enable a centralised view of the substations.

Further, the supervisory control and data acquisition (SCADA) system install­ed at the state load despatch centre has been upgraded through the Unified Load Despatch and Communica­tion sc­he­me. In ad­d­ition, the transco has es­tablished an optical fibre link throu­ghout the transmission network in order to ensure faster communication of real-time data flow. Other initiatives by BSPTCL include the adoption of e-office for effective, transparent and efficient inter- and intra-government transactions and processes.

The company has also implemented the enterprise resource planning (ERP) system to integrate varions organisational systems. This will facilitate error-free tra­n­sactions and improve the efficiency of the intra-state power transmission bu­siness. In October 2021, the second and final phase of ERP for the Patna zone, all divisions under the Patna zone and all its subdivisions went live, running successfully at pilot locations. Sub­sequen­tly, the ERP implementation acti­vities were completed. From November 26, 2021, ERP went live in all remaining lo­cations, that is, Muzaffarpur and Bha­gal­­pur zones and all subsidiary offices including all civil offices.

Owing to Bihar’s geographical location, with the presence of major rivers including the Koshi and Gandak, the state is prone to flooding and water accumulation, which hamper project execution activities during the construction of new substations and transmission lines. Mo­re­­over, delays in obtaining various statutory approvals and clearances often affect the progress of projects. Further, Bihar is largely an agricultural state with a high population density. Thus, right of way and land acquisition continue to be a ch­allenge in the timely completion of projects. To address these issues,

BSPTCL adopted a lease policy for private la­nd, which has been useful in im­proving the execution rate of projects.

In 2020, the company’s functioning was severely affected due to the Covid-in­du­ced lockdown in the country. Even after the lockdown was lifted, restrictions were imposed in Bihar that continued to affect the utility’s operating activities. This also led to delays in meeting timelines, inclu­ding filing the tariff petition and implementing projects undertaken by BSPTCL. Several projects were delayed and missed their scheduled completion date at least by six mon­t­hs. The projects got further de­lay­ed due to severe floods during Au­­­gu­­st and September in 2020.

During 2021-22, BSPTCL expects to incur a capex of Rs 5.05 billion based on the status of projects under its 13th Plan (as per its petition to the commission). Under the plan, BSPTCL is targeting to set up 165 substations with a transformation capacity of 3,000 MVA, 14,510 MVA and 15,290 MVA at the 400/220 kV, 220/132 kV and 132/33 kV levels respectively. BSPTCL plans to complete several projects in this fiscal year including the projects that could not get completed due to Covid-19 restrictions last year. How­­ever, few projects are likely to spill over to the following year.

Over the past five years, the company has witnessed significant growth in its line length and substation capacity. The tran­sco is also deploying advanced tra­ns­mission technologies to improve its operational performance. Going forwa­rd, it is expected to continue working towards the development of an efficient and econo­mical transmission system in the state.