The central government has launch­ed several programmes over the years for the power sector, particularly the distribution segment. Program­mes such as the Deendayal Upadhyaya Gram Jyoti Yojana (DDUGJY) and the Integrated Power Development Scheme (IPDS) have played key roles in improving the distribution infrastructure in rural and urban areas respectively. An­other big-ticket programme, the Rs 3.04 trillion Revamped Distribution Sec­tor Scheme (RDSS), launched this year, aims to improve the operational and fi­nancial performance of discoms with a focus on distribution infrastructure im­pro­vement as well as smart metering. These initiatives play a key role in spur­ring the demand for transmission and distribution (T&D) equipment such as conductors, cables, smart meters, towers and transformers. Like­wise, in the tra­ns­mission segment, equipment de­ma­nd is boosted by large-scale projects under the Green Energy Corridors (GEC) project  as well as the Trans­mis­sion Scheme for Renew­able Energy Zon­es. In additi­on,  In­dian Railways’ el­ec­trification dri­ve spells a huge oppor­tu­ni­ty for T&D eq­uipment, including ca­bles and conductors.

Power Line takes a look at some of these government initiatives…

DDUGJY: Launched in December 2014, the DDUGJY primarily focuses on the separation of agricultural and non-agricultural feeders to facilitate the judici­o­us supply of electricity to rural areas; str­engthening and augmentation of sub-transmission and distribution infrastructure; and metering at distribution transformers, feeders and consumer sites. In terms of physical infrastructure, as of October 2021, feeder separation, involving 122,123 ckt. km of 11 kV lines, has been completed. Under the system strengthening component, installation of 481,945 ckt. km of low tension (LT), 182,268 ckt. km of 11 kV and 22,689 ckt. km 33 kV and 66 kV lines has also been completed. Further, all the inhabited unelectrified census villages were electrified under the scheme in April 2018. The scheme will close in March 2022.

IPDS: The IPDS, notified on December 3, 2014, largely envisages the strengthe­ning of sub-transmission and distribution networks, metering of distribution transformers/feeders/consumers in urban areas, IT enablement of the distribution sector and underground cabling. In terms of physical progress, around 20,086 ckt. km of underground cables and 62,218 ckt. km of aerial bunched ca­bles have been laid as of November 25, 2021, against the targets of 65,029 ckt. km and 21,551 ckt. km respectively. Me­a­n­while, 23,304 ckt. km of high tension (HT) (target 24,262 ckt. km) and 10,378 ckt. km (target 10,769 ckt. km) of LT lines have been laid. The scheme will close in March 2022.

RDSS: The scheme aims to reduce agg­regate technical and commercial losses to pan-India levels of 12-15 per cent and the average cost of supply-average revenue realised gap to zero by 2024-25. It involves an investment of Rs 1.5 trillion, including government funding of Rs 700 billion-Rs 730 billion, geared towards str­engthening infrastructure. As per the scheme guidelines issued in July 2021, distribution infrastructure works are re­q­uired for strengthening and mode­r­ni­sing the system as well as for loss re­duc­tion. These works include separation of agricultural feeders to enable implementation of the KUSUM scheme, aerial bu­nch cables and HVDS for loss reduction, and replacement of HT/LT lines as re­quir­ed among others. States and discoms ha­ve already initiated the process of dra­fting their action plans under the scheme. In addition, the government’s smart city project is expected to promote large-sc­a­le growth in the infrastructure, telecom, power generation, T&D, engineering and automotive sectors. This is ad­vantageous for the wire and cable industry, since growth of the industry is dir­ectly linked to the growth and development taking place in other sectors.

Transmission scheme for renewable energy zones (REZ): The REZ scheme aims to evacuate 66.5 GW of renewable en­­ergy capacity (50 GW solar and 16.5 GW wind) at an estimated cost of Rs 432 billion in seven RE-rich states – Tamil Nadu, Andhra Pradesh, Karnataka, Tamil Nadu, Gujarat, Rajasthan, Maharashtra and Madhya Pradesh. A comprehensive transmission system has been planned for integration of potential REZs. The implementation of schemes is being un­dertaken in a phased manner in Rajas­than and Gujarat.

Comprehensive Scheme for Streng­then­ing of Transmission & Distribution Sy­stems in Arunachal Pradesh and Sikkim: The government-funded sche­me aims at strengthening the intra-state T&D infrastructure in the states by providing grid connectivity to remote and distant locations. The scheme was app-roved in October 2014 at an estimated cost of Rs 47.5 billion, with an estimated completion date of December 2018. The cost has been revised to Rs 91.3 billion, and the completion date to March 2024. The project is being implemented by Powergrid. As of October 2021, 64 out of the 292 sanctioned ele­ments have been completed. The overall physical prog­ress stands at 44 per cent.

North Eastern Region Power System I­mprovement Project: The Rs 67 billion scheme is being implemented for the sta­tes of Assam, Manipur, Meghalaya, Mizo­ram, Tripura and Nagaland. It aims to create a reliable power grid and im­prove their connectivity to the upcoming load centres. The scheme is being funded by the central government with a loan from the World Bank for 50 per cent of the project cost. The project is being implemented by Powergrid. Of the sanctioned 444 transmission elements, 312 have been completed as of October 2021. 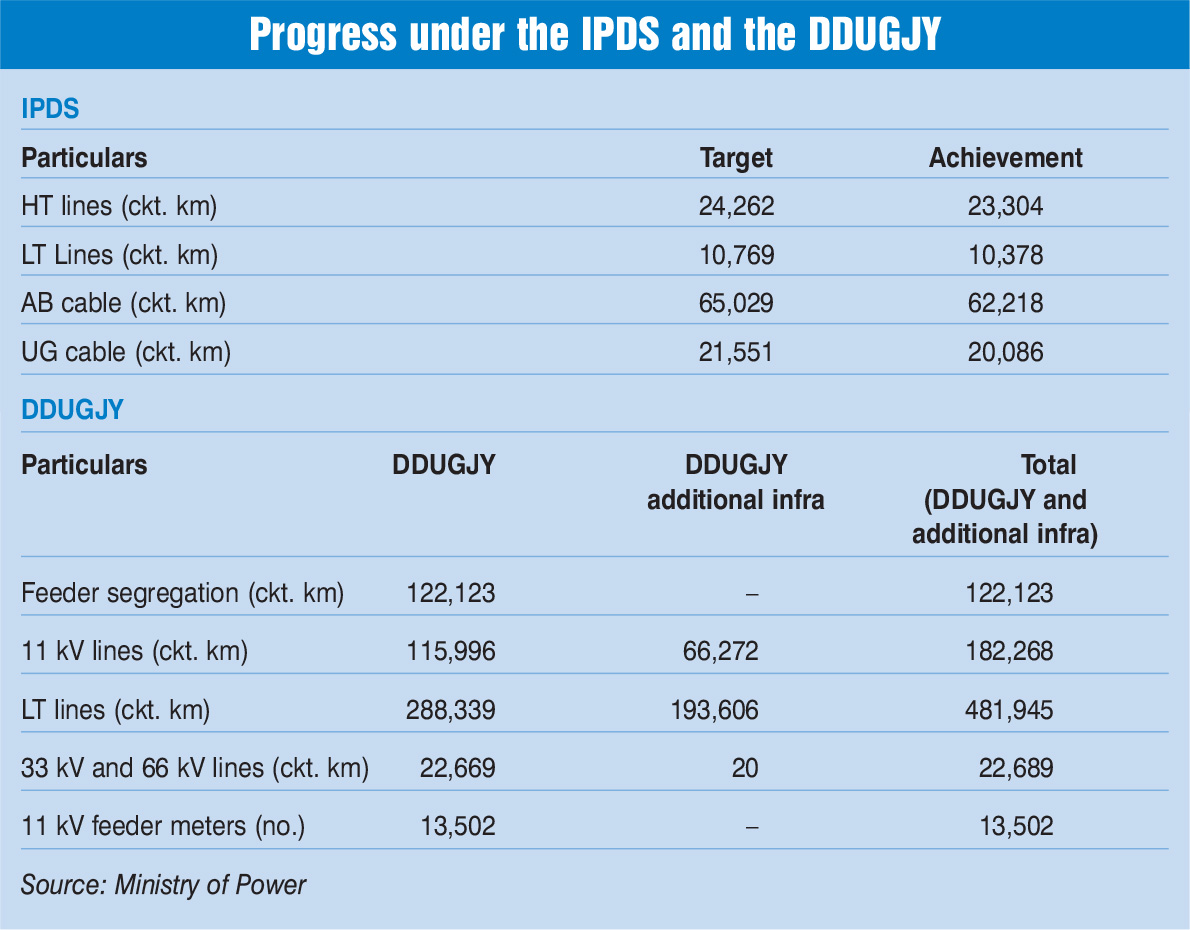 The central government aims to fully el­ectrify the broad gauge network by De­c­ember 2023. As of March 2021, over 45,000 route km (rkm) or 71 per cent has already been electrified out of the total net­work length of 64,689 rkm. Another 18,800 rkm remains to be electrified by December 2023. During 2021-21, the Mumbai-Howrah route, known to be one of the busiest routes in the co­untry, was fully electrified. This was one of the lines out of the 6,015 rkm electrified in 2020-21. Notably, it was in 2020-21 that railway electrification took place at the fastest pace. Over the coming year or two, several lines are expected to be ele­c­trified to up­grade India’s railway network. This is expected to provide opportunities to ov­erhead line equipment su­ppliers as well as engineering, procu­rement and construction (EPC) contractors. By Mar­ch 2022, the major reso­urce earning sta­tes for Indian Rail­ways, namely, Odi­sha, Ma­dh­ya Pra­desh, Ch­ha­­ttis­garh, Jh­ar­khand, Himachal Prade­sh, Haryana and Bihar, will be fully electrified. Nota­bly, in 2021-22, the highest-ever budget allocation of Rs 75.42 billion was made for railway electrification projects.

The distribution segment continues to be the weakest link in the power sector. The poor financial and operational performance of the discoms characterised by high aggregate technical and commercial (AT&C) losses, mounting discom debt and […]

The power distribution segment has shown considerable growth over the past few years. Even though the majority of discoms continue to make losses, the aggregate book losses have declined by around Rs 175 billion over […]

Over the past few years, the central government has launched a number of schemes for improving the health and infrastructure of the power sector. Primary among them was the Ujwal Discom Assurance Yojana (UDAY), launched […]