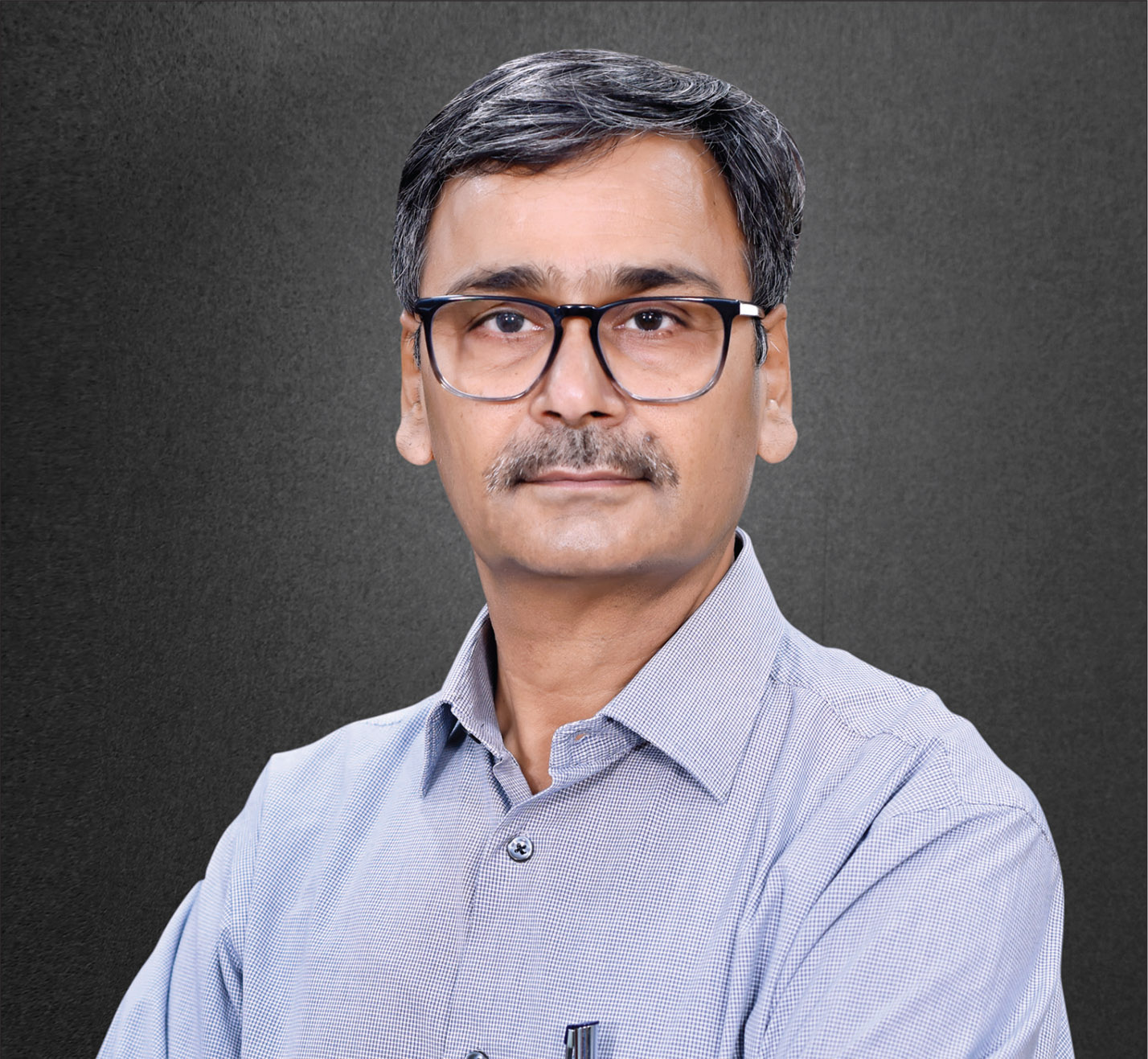 With India doubling down on its climate goals at the COP26 summit in Glasgow, energy efficiency has become more crucial than ever. Arun Kumar Mishra, CEO (deputation), Energy Efficiency Services Limited (EESL), and director, National Smart Grid Mission (NSGM), believes that the nation is up to the task…

A forward-looking professional, Arun Kumar Mishra is upbeat about the future of the power sector. “Going forward, electricity will be seen as a service, and there will be a subset of consumers who will not hesitate to demand this service, even if it is expensive,” he believes. His view carries significant weight. With over three decades of exper ience in the energy sector, across organisations such as NTPC and the Power Grid Corporation of India (Powergrid), and roles as varied as director, NSGM, project management unit, and vice chair, Inter­na­tional Smart Grid Action Network, Mish­ra has intimate knowledge of the sector’s workings and a thorough grasp on its outlook. He is currently responsible for EESL’s operations across the country.

Looking back at the progress made by the sector, Mishra notes that the Elec­tri­city Act, 2003 was a watershed mo­­ment in its history. The country has come a long way since then. The per capita power consu­m­ption has increas­ed by almost 2.3 tim­es. The installed capacity currently sta­nds at 390 GW and the renewable en­ergy ca­pacity (solar, wind and hydro ­po­wer) has surpassed 103 GW. This heralds a bright future for renewables. The government, he be­li­e­v­es, has worked towar­ds addressing co­n­sumer needs through several gr­ou­nd-breaking reforms. But he is also prag­­matic about what nee­ds to be done to improve the sector’s pro­spects. “As we progress towards the next step, we need innovative technological solutions that are flexible and sustainable in nature,” he says. These include demand-side management and energy storage technologies, which can ensure consistent, round-the-clock supply of energy to homes, businesses and industries at an optimum cost to all stakeholders.

In meeting the upcoming demand for electricity-as-a-service, EESL will re­ma­in focused on renewable energy and energy-efficient measures to facilitate a better quality of life and power for all citizens, says Mishra. His goal is to ensure universal energy access while addressing environmental challenges. This pro­cess will involve tackling some of the most pressing issues of the sector. “The rise in power demand and the simultaneous urgency to reduce the carbon footprint are two of the biggest challenges that affect the growth and functioning of the power sector,” says Mishra. At the COP26 summit held last year, Prime Minister Narendra Modi set a new target of achieving carbon neutrality (net zero) by 2070 for India. This has prompted a focus on renewable capacity addition, balancing the country’s developmental objectives with its en­vironmental ones. “I look forward to the country doubling its install­ed renewable energy capacity from the present level,” Mishra says.

This could lead to grid stability issues. “An increase in the proportion of renewables in the energy mix can re­sult in in­ter­mi­t­tency and unpredictability of energy flo­ws, which, in turn, can affect grid stability,” he notes. Creating a smart, digi­talised and interconnected energy system for the future, “a grid that is capable of handling the variability of renewable energy”, could be a solution to this.

Mishra’s is, of course, not the first voice to augur the incoming wave of digitalisation. He is strongly supportive of the tre­nd, seeing it as a “crucial imperative”, and optimistic about its benefits. “Digi­tal­isa­tion will transform the grid from unidirectional to multidirectional and enable distributed generation,” he says. Along­side such benefits as better grid reliability and smooth power transmission, digitalisation should encourage the integration of renewable energy at the consumption end of the power grid. Di­gital interventions can create a more resilient network, free from fluctuations, by enabling grid operators to meet their renewable energy commitments, Mishra asserts. This sh­ou­ld ultimately yield fi­nancial benefits for all stakeholders.

There are other noteworthy trends as well, Mishra observes. There is a movement towards greater transparency in the sector, as well as initiatives to em­po­wer consumers with better control over their consumption. These include de­ma­nd-side management, smart metering and smart lighting, and the use of cost-saving and energy-efficient appliances such as LED lights, fans and bulbs. Such interventions are also environment-friendly, thus contributing to the overall goal of environment protection.

EESL has taken considerable strides in this direction. “Transforming the LED market has been a remarkable achievement,” he says. EESL has distributed over 367 million LED bulbs, 7.25 million tube lights, 2.3 million energy efficient fans and 12.2 million street lights, resulting in energy savings of approximately 47.7 billion kWh per year along with an estimated greenhouse gas reduction of 38.6 million tonnes of CO2 per year. More­­­over, EESL has made significant contributions to the Smart Meter Natio­nal Pro­g­ramme, including the launch of In­telliSmart in 2019. EESL has signed MoUs and agreements with Andhra Pra­desh, Uttar Pradesh, Haryana, Bihar, Del­­hi and Telangana. It has deployed more than 2 million smart meters across Uttar Pradesh, Bihar, Haryana, Rajas­than, Delhi and the Andaman & Nicobar Islands. The New Delhi Municipal Cor­po­ra­tion (NDMC) was the first utility to re­place conventional meters with smart meters for all its customers with EESL’s help. This was done without any upfront investment by NDMC. “The present smart metering market is mainly energy efficient,” says Mishra.

Another key achievement of EESL is the implementation of the Building Energy Efficiency Programme. Under this, 10,423 buildings (including 7,000 railway stations/service buildings and 66 air­port buildings) have been retrofitted with energy efficient equipment su­ch as LED lights, five-star-rated fans and su­per-efficient air conditioning. This programme generates annual energy savings of 224 MUs. EESL’s other proje­cts and accomplishments include the la­un­ch of Convergence Energy Services Li­m­i­­ted to tap into the carbon market; a focus on accelerating the adoption of el­ectric vehicles (EVs); upscaling EV charging infrastructure; and increasing access to affordable and renewable en­ergy through decentralised solar.

But Mishra isn’t resting on EESL’s laurels. In line with his stated direction for the company, he says that unlocking the mar­ket potential for efficient energy in uncharted domains is of higher priority. EESL is formulating programmes to bring energy efficiency and ease of deployment to industries. This includes addressing the capital-intensive domain needs for en­­ergy efficient appliances such as pum­ps and motors, which would need to be replaced after five or more years (depe­n­ding on usage and quality). By extension, this means the company would need to focus on breaking into new markets, thus increasing the number of players in the energy efficiency space and reducing the cost of interventions.

Mishra’s leadership style emphasises people; he believes that is they who “make a difference”. “The structure of an organisation should be well understood by people, and it should be the priority of their decision-making blueprint,” he says. As such, one of EESL’s goals is to contribute to society. To meet this goal, Mishra hopes for EESL, under his leadership, to be “nimble-footed”. He wants the company to take on a role beneficial to the sector (and society) at large by co­ntinuing to introduce economies of sc­ale through its “unique aggregation mo­del” and ensuring that energy efficiency is everyone’s first choice.

This emphasis on people also extends to employees. “Each professional is different as an individual, and these differences should be respected,” says Mishra. He thus believes that an organisation sh­ould have a value system that is transparent and enables the goals of its employees to be aligned with those of the organisation. Mishra’s love for working with te­ams is evident. No wonder, then, that he considers learning new facts about his team every day, including their functional and dysfunctional aspects, as the most rewarding part of his job.

Mishra’s goals for EESL, and for his career, show an evident strain of humility, and this extends to his personal am­bi­tions as well. “My only ambition has been to not be a nuisance to others,” he says genially, and attributes this down-to-earth nature to his upbringing. He believes that achieving a work-life balance is a question of learning how to ba­lan­ce the energies within oneself – a process that he believes would make him useful to his team at EESL, and to their energy efficiency goals.

Mishra has a BSc in electrical engineering from the National Institute of Tech­no­lo­gy, Kuruk­shetra, and an advanced di­p­loma in management from Indira Gandhi Natio­nal Open University. He lives with his wife – his “rock-solid support” – who has inspired him to be “re­sourceful” with respect to his commitments. He also has a son and a daughter, about whom he says, “They are growing up to be great human beings who want to make a difference to society and the environment, and I am proud of them.”