Going forward, the share of hy­dro­power in the country’s energy mix is expected to increase and thereby help in tackling climate change. In addition to generating clean energy, hydro­power has the potential to be used as pe­a­­king capacity to complement the integration of more intermittent sources of renewable energy by providing effective means of energy storage. Moreover, ma­ture technologies such as pumped storage can help in load levelling, peak load sharing and managing the stability of the electricity grid in times of erratic demand and supply. With India committing to meet 50 per cent of its energy requirements through renewable energy by 2030 at the COP26 summit at Glas­gow, hydro­power could see a greater push fr­om the government and developers.  However, the segment growth has been tardy owing to factors such as the long gestation period of hydroelectric power projects (HEPs), geological issues, rehabilitation and resettlement issues, local resistance, delays in obtaining environmental clearances, limited offtakers, and time and cost overruns. The government has, however, been working on addressing these hurdles and ensuring that the competitiveness and economic viability of hydro­power projects is maintained.

Ownership-wise, the state sector acc­ou­nted for the highest share in the instal­l­ed hydropower capacity at 58.3 per cent, followed by the central and private sectors with 33.6 per cent and 8.1 per cent share respectively. The install­ed hydro­power capacity has recorded a low compound annual growth rate (CAGR) of about 1.1 per cent in the past five ye­ars (2016-17 to 2020-21). In contrast, coal-ba­s­ed and renewables-based installed capacities have grown at a CAGR of 2.2 per cent and 16.3 per cent, respectively, during the same period.

During 2021-22 (as of No­v­ember 2021), hydro­power generation stood at over 118 BUs. Hydropower generation remained largely insulated from the effects of the pandemic due to its must-run status. The share of hydro gene­ration in the to­tal power generation mix remained at ar­ound 11 per cent during 2020-21, as com­pared to 10 per cent in 2016-17. 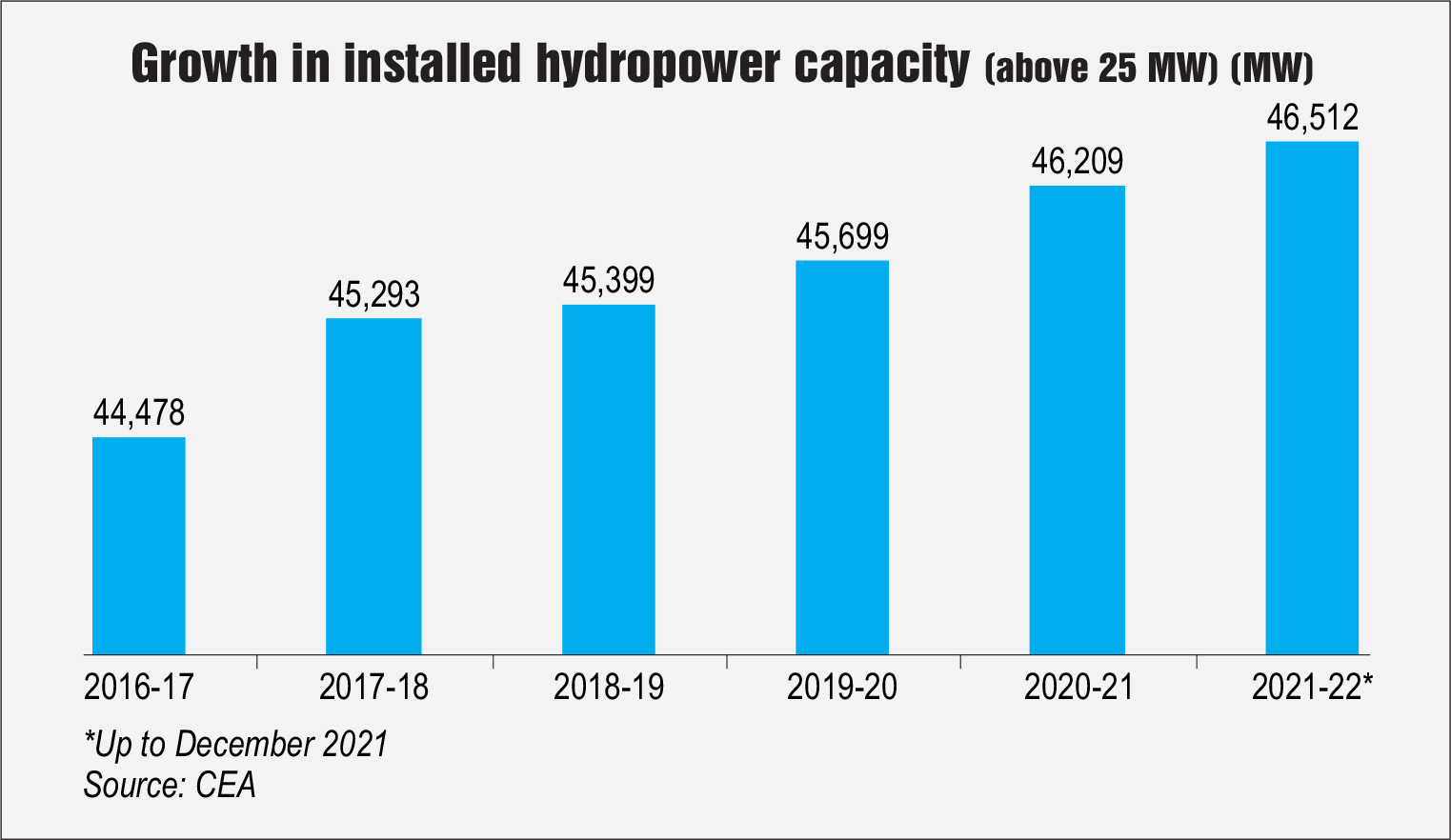 The central government has undertaken various measures to promote the hydro­power segment. At the COP26 summit, India set a target to augment non-fossil fuel electric capacity to 500 GW and meet 50 per cent of its energy requirements from renewables by 2030. Fur­th­er, it announced a net zero emissions tar­get for 2070. This is expected to en­hance investments and the development of non-fossil fuel sources including hydropower. Some other policy an­nouncements which are expected to benefit the segment are:

HPO: To achieve the target of 30 GW of hydropower by 2029-30, in February 2021, the Ministry of Power (MoP) issued a revised renewable purchase obligation (RPO) trajectory, including a long-term trajectory for large hydropower pro­jects commissioned after March 8, 2019. To re­call, in March 2019, the government iss­ued an order detailing various policy me­a­s­ures to promote the hydropower

Waiver of ISTS charges for pumped storage: In June 2021, the MoP issued an or­der on the waiver of inter-state trans­mi­ssion system (ISTS) charges for pump­ed storage hydropower plants to be commi­ssioned up to June 30, 2025. ISTS transmission charges shall be wai­ved for such projects for 25 years from their commissioning. The waiver of tra­nsmission ch­arges has also been allow­ed for trading of electricity generated/supplied from pu­mp­ed storage hydro­power plants.

Dispute resolution: In September 2021, the MoP approved the formulation of a dispute avoidance mechanism for construction contracts of central public sector enterprises (CPSEs) executing hydro­power projects. The mechanism manda­tes the appointment of independent engineers, who will have regular oversi­ght over the projects, with open communication with all the key stakeholders.

Proposal to hive off constructed hydro plants to SPVs: In July 2021, the government was reportedly exploring hiving off constructed central sector hydropower plants into special purpose vehicle (SPV) companies under their existing developers to maximise their valuations during stake sale. As per the proposed national asset monetisation pipeline, NITI Aayog has suggested segregating constructed projects and transferring them to an SPV, under the CPSE that owns the projects. The SPVs consisting of constructed projects might be subsidiaries of their res­pective CPSEs. This would ensure that the aggregate value of the parent and subsidiary company is greater than that of the present developer of the project. 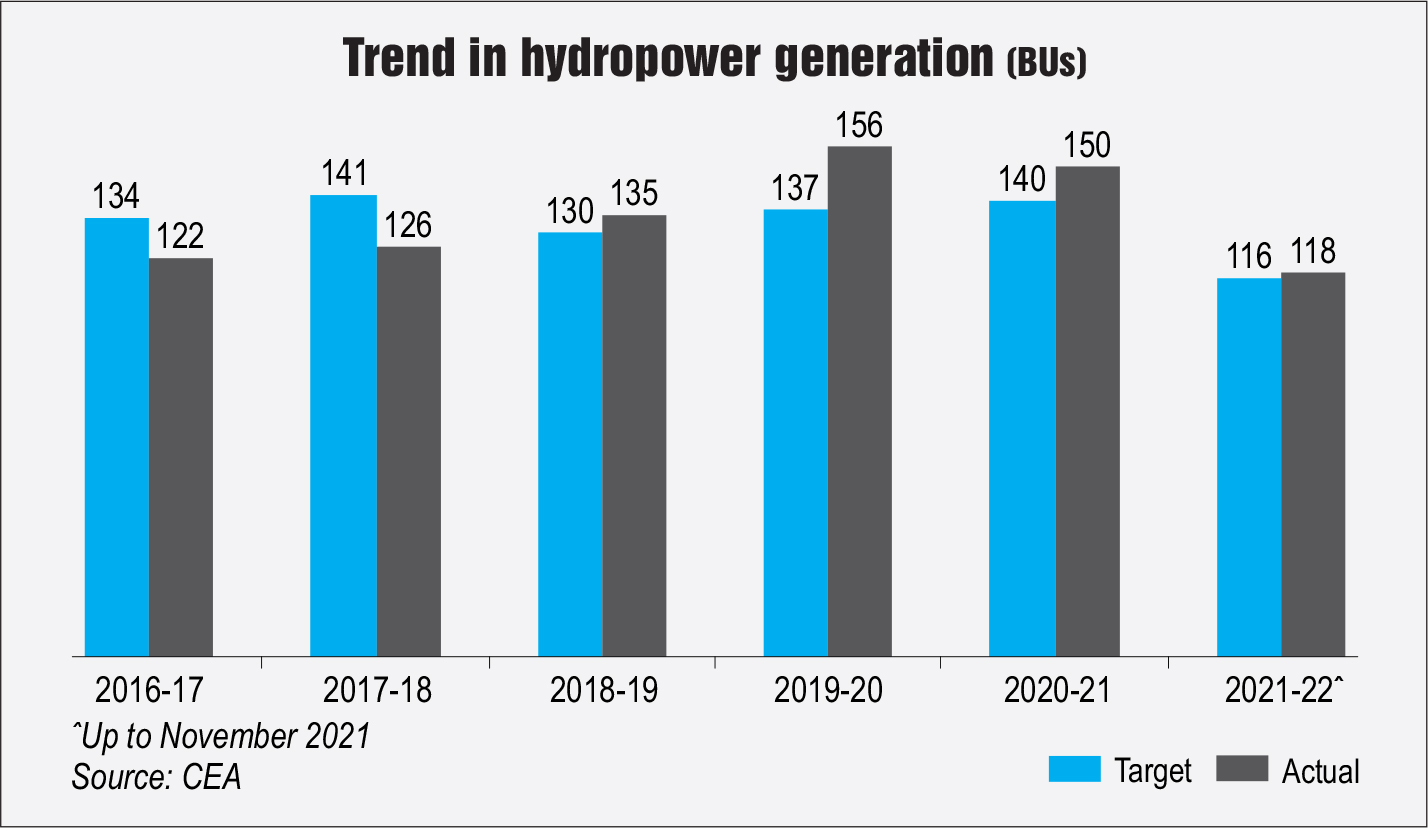 Arunachal Pradesh: In December 2021, SJVN Limited announced its plan to invest Rs 600 billion to set up 5,097 MW of hydropower capacity in Arunachal Pradesh. The company has been allotted five HEPs – the Etalin HEP (3,097 MW), Attunli HEP (680 MW), Emini HEP (500 MW), Amulin HEP (420 MW) and Mihumdon HEP (400 MW), all located in the Dibang basin. These projects are ex­pected to be commissioned in the next 8-10 years. On commissioning, these projects are expected to generate about 20 BUs of clean energy an­nually on a cumulative basis.

Uttarakhand: In the same month, the central government filed an affidavit before the Supreme Court to allow the completion of seven under-construction HEP projects in Uttarakhand. The seven projects are Tehri Stage II (on the Bha­girathi River), Tapovan Vishnugad (on the Dhauli­gangan river), Vishnugad Pipalkoti (on the Alaknanda river), Singoli Bhat­wari and Phata Buyong (on the Manda­kini river), the Madhya­mahe­shwar (on the Madhyamaheshwar Ganga) and Kali­ganga II (on the Kali­ganga river). To re­call, the Supreme Court had imposed a moratorium on clearing hy­dro­electric projects in Uttarakhand following flash floods in June 2013.

Jammu & Kashmir: In January 2021, the union cabinet approved an investment of Rs 52.82 billion for the 850 MW Ratle HEP located on the river Chenab in Jammu & Kashmir. The project is being developed by Ratle Hydro­elec­tric Power Corpo­ra­tion Limited, a joint venture (JV) between NHPC Limited and Ja­mmu & Kashmir State Power De­ve­lo­p­ment Cor­poration Limited (JKSPDCL). An agreement bet­ween the promoters was signed accordingly in April 2021 for the incorporation of the JV. NHPC will ho­ld a 51 per cent stake in the JV while JKSPDCL will hold 49 per cent. Another MoU was signed by the two entities in Ja­n­uary 2021 for the execution of the Kir­thai II (930 MW), Sawal­kot (1,856 MW), Uri I Stage II (240 MW) and Dulhasti Stage II (258 MW) hydro­power projects.

Pumped storage plants (PSPs) can provide an ideal solution for energy storage and load balancing. It is the only commercially proven technology available for grid-scale energy storage. As of Nov­ember 2021, there are eight PSPs with a total capacity of 4,746 MW in the country. However, only six PSPs (Ka­da­­mparai,

Bh­i­­ra, Srisailam, Ghatgar, Pu­rulia and Na­gar­junasagar), aggregating 3,306 MW in capacity, are working in both generation and pumping modes. The remaining two PSPs (Sardar Sarovar and Kadana St­ages I and II), aggregating 1,440 MW, are working only in generation mode. Fu­r­­ther, th­e­re are three under-construction PSP pro­jects with a total capacity of 1,580 MW – the 1,000 MW Tehri Sta­ge II project in Utta­rakhand being im­plemented by THDC Limited, the Ku­n­dah PSP Stages I, II, III and IV (500 MW) being implemen­ted by TANGEDCO in Tamil Nadu, and the Koyna Left Bank (80 MW) in Maha­rashtra being implemented by the Water Resour­ces Depart­ment of Maha­rashtra, which is held up at present. The detailed project report for the Turga project (4×250 MW) in West Bengal has been approved, while the 1,200 MW Pin­na­puram project in Andhra Pradesh is un­­der examination. Further, survey and in­vestigation are in progress for 17 projects to­talling 16,770 MW and 14 projects totalling 8,855 MW are at pre-feasibility stage.

While hydropower remains an attractive source of clean energy, its development entails a number of challenges. Accor­ding to the Central Electricity Authority (CEA), 36 HEPs (above 25 MW) which are under development have time/cost overruns. These include delay in environmental and forest clearances, infrastructural constraints at site due to project terrain, geological surprises resulting in change in design, stoppage of work, damage, and remobilisation of resources.

As HEP are site specific and their tariffs depend on location/design parameters and high initial investment, the tariff for new HEPs is relatively higher, which makes the despatch of power from new projects through long-term power purchase agreements difficult. Specific to PSPs, a major drawback of the current pricing mechanism is that it does not take into account the grid flexibility aspects of such projects and be­cause of the generic pricing mechanism, PSPs are not utilised to full capacity.

Further, various state hydro­po­wer policies restricting the entry of CPSEs and the dependence on a few contractors are some of the other issues. Further, the ben­ch­mark capital cost of HEPs has been rising on the back of the rising cost of inputs such as steel, aluminium and ce­­­­ment. The capital cost has increased gra­dually from Rs 60 million per MW in 2004 to Rs 160 million per MW in 2018.

Future outlook and the way forward

As per the CEA, at present 36 HEPs (ab­ove 25 MW) totalling 12,663.5 MW are under execution. Of these, 15 HEPs are in the central sector (8,485 MW), 12 HEPs are in the state sector (2,721.5 MW) and 9 HEPs are in the private sector (1,457 MW). Of these, 26 HEPs to­talling 10,577.5 MW are under active construction while 10 HEPs totalling 2,086 MW are currently held up. As per the CEA’s optimal generation capacity mix, the installed hydropower capacity is estimated to reach 76 GW by 2029-30, contributing to nearly 9 per cent of the total installed power capacity. In order to accelerate the development of HEPs, the segment needs to overcome the various challenges. Financial incenti­ves, along with policy and regulatory support from the central and state governments, need to be developed to enhance investor confidence. It is also important to develop a pricing mechanism for each service that pumped storage offers.

In the backdrop of India’s ambitious emission targets and the recent net zero commitment by 2070, hydropower is likely to be an active segment in India’s re­newable energy portfolio. Further, the Covid-19 pandemic has demonstrated the significant role that hydropower can play with respect to pumped storage through better load management during periods of fluctuating demand. There­fore, a revived impetus to hydropower can be expected, with a special focus on pumped storage hydropower in the coming years. If developed sustainably, hydropower can not only maintain its competitiveness but also simultaneou­sly complement solar and wind energy as a reliable source of energy storage. The competitiveness, however, will de­pend on the level of mitigation of the fi­nancial, environmental and social risks involved with its development.

Coal-based capacity remains the largest contributor to power generation in India with a share of 71 per cent in 2020-21, supported by a large coal reserve in the country. Despite the decline in its share […]

Case for Hydro: Proposed policy could lead to a revival

The absence of a hydropower policy that comprehensively addresses the woes of this segment has been one of the biggest areas of contention for the industry. As a result, growth in the segment has been […]