Given the fact that many regions in India are struggling to support essential services such as drinking water and irrigation, water is set to become a limiting factor in the growth of thermal power plants (TPPs). Coal-fired power plants consume over 3,500 litres of water per MW generated every hour and 88 per cent of the total industrial water is consumed by coal-fired power plants. Moreover, 54 per cent of the country is water-stressed and 48 per cent of coal-fired power plants are in water-stressed regions of the country. In the past couple of years, there have been media reports of power plants re­porting water crisis. In 2021, the Chha­bra thermal plant in Rajasthan was threatened with a shutdown crisis due to water shortages. Simi­larly, in 2019, the Raichur thermal power station in Kar­na­taka was hit by a water shortage crisis, affecting power generation at the plant. Experts note that the power generation sector, which comes low in the order of priority of wa­ter allocation as defined by the Natio­nal Water Policy, 2012, could suffer if the water situation deteriorates further.

Water is required in a TPP for various purposes such as coal handling, ash handling, steam production, steam condensation, green belt maintenance, firefighting and domestic purposes. The majo­rity of TPPs, including coal, gas as well as nuclear power plants, consume freshwater from dam reservoirs, rivers and canals, while some located near co­as­tal regions depend on seawater. As per the Council on Energy, Environment and Water’s (CEEW) 2018 report on “En­ergy-Water Nexus and Efficient Water-Cooling Technologies for Thermal Power Plants in India” for old TPPs, the water re­quire­ment (consumptive) in cooling towers is around 8-9 m3 per hour MW without ash water recirculation and with ash water recirculation, the requirement comes down to 5 m3 per hour MW. Vari­ous TPPs have been designed with a consumptive water requirement of 3.5-4 m3 per hour MW recently.

It is worth noting that a major amount of water is needed for cooling purposes, amounting to 80-90 per cent of the total water requirement, more so in the case of coal-based TPPs. Given the large wa­ter requirements of TPPs, it is clear that any improvement in the water use efficiency of a plant would depend largely on an improvement in the cooling technology. This is because the choice of cooling technology has a significant impact on power generation and capex requirement. Simply put, the lesser the water withdrawal, the higher is the cost of the technology, as well as the efficiency penalty on power production. More­over, dry cooling technology reduces power production by 7-8 per cent, which is a significant reduction. Therefore, it is essential to understand not only the implication of water efficient cooling technologies on water use reduction but also the implications of such decisions on power production efficiency.

Norms for water consumption and use

In order to address these issues, the Mi­nistry of Environment, Forest and Cli­mate Change (MoEFCC) tightened the water consumption standards for TPPs in December 2015. As per the revised norms, the existing plants at that time were required to achieve a specific water consumption of 3.5 cubic metres per MWh by December 2017 and plants deploying the once-through cooling me­chanism were required to install a cooling tower. Moreover, all plants set up after January 2017 needed to operate wi­th a water consumption level of 2.5 cubic metres per MWh and achieve zero liquid discharge. In addition to this, all power plants were mandated to switch their once-through cooling system into recirculating cooling technology, which is an efficient cooling technology, and limit the water consumption from India’s power plants.

In January 2016, measures in the am­ended Tariff Policy, 2016 were notified, wherein all TPPs located within a 50 km radius of a sewage treatment plant were mandated to use treated sewage wa­ter and the associated cost was all­o­wed to be passed through in the tariff. 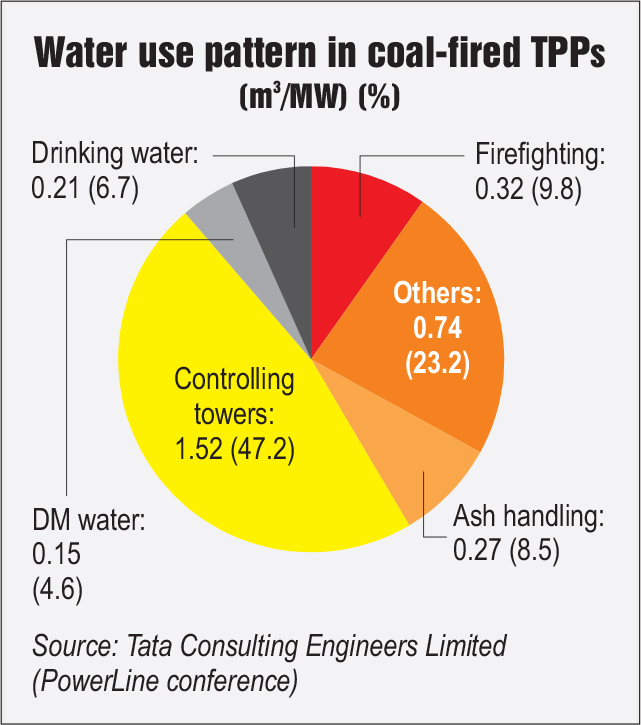 NTPC Limited has pioneered the adoption of several new technologies including ash water recirculation, liquid waste management systems and performance analysis and diagnostic optimisation to support water management systems. To reduce water usage further, air-cooled condenser technology is under implementation at the North Karanpura super thermal power project and the Patratu super thermal power project. Some of the NTPC stations have already become zero liquid discharge (ZLD) compliant and implementation is under progress in the remaining stations, with one more station set to become ZLD compliant by March 2022.

Meanwhile, private power producer Nabha Power Limited has undertaken several measures for water management in India. To control service water outflow, the slurry pump cooling water has been rerouted to seal water sumps, saving 100 m3 water per day. In addition to the this, the ash silo blower cooling wa­ter has also been harnessed and brought to CT basin, saving 90 m3 per day. Vari­ous digital initiatives such as real-time monitoring in the domain of water treatment have also been undertaken in order to optimise blowdown percentage of water and chemical dosing. In addition to this, electromagnetic flow mete­rs-based water-balance systems are hi­ghly reliable with human-interface interface providing real-time as well as periodic reports for analysis.

Jindal Power Limited’s power plant located in Tamnar village in Raigarh district is a 1,000 MW coal-based plant that generates wastewater to the tune of 2,680 kl per day. The wastewater is then used for ash slurry preparation and the remaining (around 180 kl) is used for watering plantations around the power plant after treatment. Meanwhile, Tata Power’s Jojobera power plant in Jhar­kh­and has installed an eff­luent treatment plant and all wastewater is reused after treatment (as per the Envi­ron­mental Clearance Compliance and Monitoring report of Units 1-5 for six months, April 2021-September 2021). In addition to this, the ZLD system has been developed and treated effluent is being reused in the process.

As per the World Resources Institute’s research, 70 per cent of India’s TPPs will face high water stress by 2030 due to climate change and increased demands from other sectors. The excessive water consumption and lack of efficient water management systems may increase water stress, affecting households, farms and industries in the plant’s neighbourhood, sometimes resulting in the shutdown of thermal plants. Between 2017 and 2021, approximately 8.2 TWh has been lost in energy production due to a lack of water and that is enough electricity to power 1.5 million Indian households for five years. Another major challenge is that deteriorating water quality at the supply end puts higher ionic load on various plants.

As per industry experts, India’s electricity generation is set to increase by 2.17 times between 2030 and 2050. This means that the per capita electricity consumption will be 3,988 kWh in 2050, potentially increasing the pressure on water management systems in power plants. With the growth in electricity de­mand, better data will help stakeholders such as city water managers and energy planners anticipate risks in water management systems in order to improve de­cision-making when complex water usage trade-offs among human cons­umption, power generation and agriculture come into play, ensuring a more efficient and equitable use of water re­sources in TPPs. Given the huge am­ount of water consumed in TPPs, immediate action is needed to conserve water by maximising the water use efficiency of power plants.