The majority of the coal-based capacity in the country uses indigenous coal, characterised by ash content of 24-63 per cent, which generates large quantities of fly ash on combustion. Fly ash is a source of water and air pollution and its proper handling, management and utilisation is paramount. Recently, the Ministry of Environment, Forest and Climate Change (MoEFCC) issued revis­ed guidelines for better monitoring and utilisation of fly ash, which mandates thermal power plants (TPPs) to ensure 100 per cent utilisation of their yearly fly ash output within a three-year period and in no case should ash utilisation fall below 80 per cent in any year. Applicable from April 2022, the new guidelines also stipulate a penalty regi­me for non-compliant TPPs, wherein an environmental compensation of Rs 1,000 per tonne for unutilised ash will be levied in case a TPP fails to achieve at least 80 per cent ash utilisation.

In December 2021, the MoEFCC notified re­vised fly ash utilisation guidelines for coal and lignite TPPs, which aim to promote 100 per cent fly ash utilisation in an eco-friendly manner in cement manufacturing, construction of roads and flyover embankment and other fly ash-based products, among other things. The revised guidelines have made it ma­n­datory for coal- and lignite-based plants to ensure 100 per cent utilisation of ash generated during that year. How­ever, in no case shall the utilisation fall below 80 per cent in any year and TPPs will achie­ve an average ash utilisation of 100 per cent in a three-year cycle. The guidelines state that the unutilised accumulated ash, that is, legacy ash, must be utilised progressively by TPPs in such a manner that the utilisation of legacy ash is fully completed within 10 years from the date of publication of this notification. Applicable from April 2022, the new guidelines have, for the first time, introduced a penalty regime for non-compliance, based on the polluter pays principle. If a TPP does not achieve at least 80 per cent ash utilisation it will have to pay an environmental compensation of Rs 1,000 per tonne of unutilised ash at the end of every financial year. The am­ou­nt collected by the Central Pollution Control Board from TPPs will be used towards the safe disposal of the un­uti­lised ash. It may also be utilised for ad­vancing research on the use of ash, including ash-based products.

NGT order on the Fly Ash Management and Utilisation Mission

With the aim of streamlining monitoring and coordination of various issues relating to handling and disposal of fly ash across the states of Uttar Pradesh and Madhya Pradesh, the National Green Tribunal (NGT), in a recent order in January 2022, has directed the constitution of a Fly Ash Management and Utilisation Mission. It will comprise secretaries from the ministries of environment, coal and power and chief secretaries of the two states. Among other things, it will be responsible for formulating roadmaps and tracking progress in fly ash utilisation available for all TPPs and their clusters, on the MoEFCC website on a quarterly basis, for the benefit of all stakeholders. This order was issued in response to eight ongoing cases (clubbed together) in the matter of fly ash mismanagement and accidents.

In terms of fly ash utilisation, the ce­ment industry is the biggest consumer of fly ash in India, with a 24 per cent share in the total utilisation. Blending fly ash in cement is environmentally sustainable and financially attractive, since it reduces the requirement of coal and limestone in cement manufacturing. Around 12 per cent of fly ash was utilised as a substitute for soil or sand to reclaim low-lying areas, thereby saving the fertile topsoil. Besides these, fly ash is used in the manufacturing of bricks and concrete, which binds ash and prevents it from escaping into the environment. Fly ash-based bricks and tiles are as good as clay-based conventional bricks. Another use of fly ash is in the building of roads and embankments, since it is lightweight and compressible. In the agricultural sector, fly ash, being rich in micronutrients, helps in early maturity of crops, improves soil aeration and conserves plant nutrients and water, without affecting the groundwater quality. 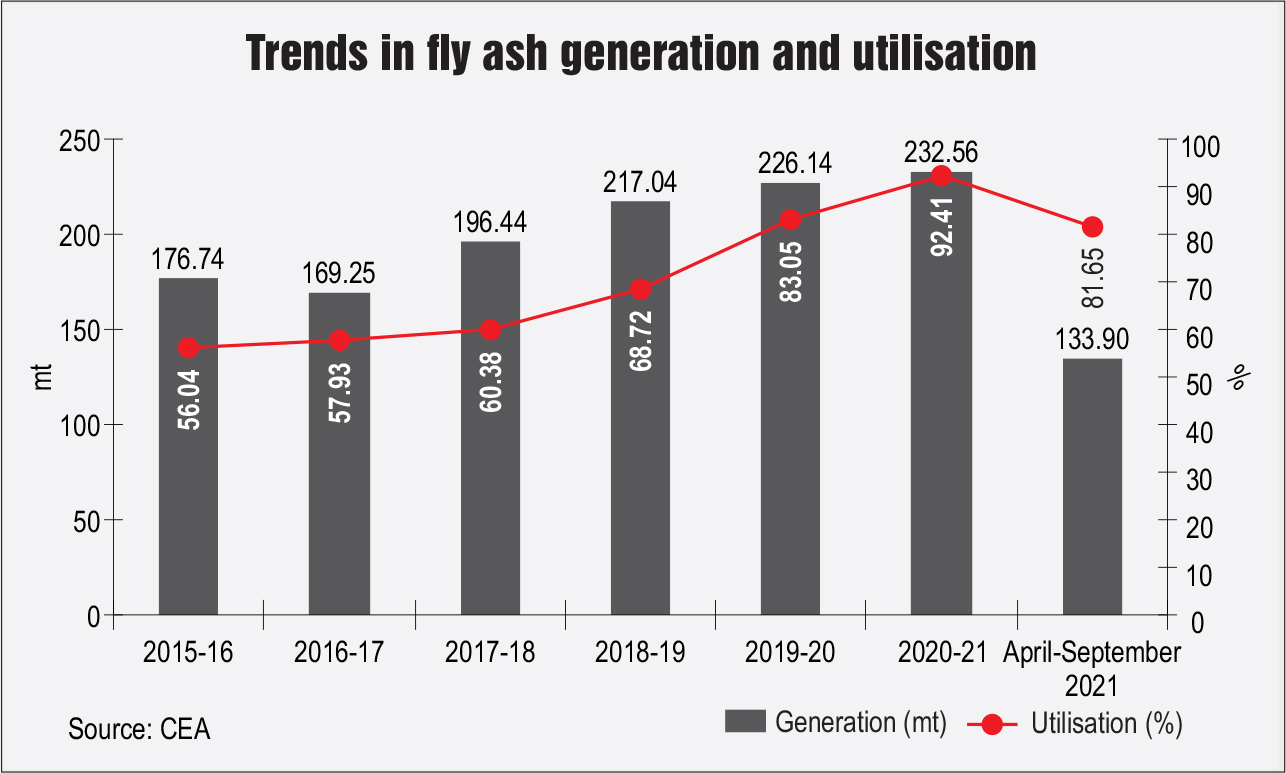 The gencos have conventionally relied on wet ash disposal systems, but new technologies in ash disposal and conveying are now focusing on minimising water usage and eliminating wastewater generation, which augurs well for the environment. Pneumatic conveying systems are emerging as the preferred choice for handling ash in dry form. For end users too, fly ash in a dry form is preferred, especially for manufacturing cement and bricks. In addition, gencos are deploying online ash analysers that use gamma rays to measure the ash content and calorific value of coal. These analysers measure the total ash content in coal on a belt conveyor and report the results to the plant operator in real time, where it is used for informed decision-making and process control. Further, with the use of alternative fuels such as biomass and refuse-derived fuel (RDF), new equipment such as flue gas treatment systems may be required to maintain ash quality. It has been observed that the ash from thermal units co-firing RDF and coal has a higher concentration of mercury and, therefore, a change in ash management strategies will be needed by gencos.

Notably, NTPC has put in place an ash water recirculation system to reuse the decanted ash slurry water and toe drain water from the ash pond for meeting the requirement of ash handling and service water. Further, it is developing an eco-park on the ash disposal area at the Badar­pur TPP to have an environmentally sustainable neighbourhood and the area is being developed as a green is­land. NTPC has also undertaken various initiatives such as installation of dry bottom ash ha­ndling system, installation of dewatering bins, rail loading system for transportation of dry fly ash, feasibility study for large capacity silo, etc.

The operations and maintenance (O&M) of an ash handling plant is crucial to en­sure its proper functioning, op­timal performance and safe operations. The measures deployed for the O&M of ash handling and conveying plants include regular maintenance of ash disposal pipelines to avoid leakages of ash slurry, regular maintenance of Geho pumps, regular cleaning of toe drains, concreting and covering of toe drains wherever possible, regular cl­ea­n­ing of ash water recovery sump well, pe­riodic testing of ash slurry at the discharge point into rivers/low-lying areas, regular cleaning of accumulated ash in the internal drains of the TPP and periodic monitoring/testing of groundwater for heavy metals near ash bunds, among other things.

To conclude, while environmental regulations mandating 100 per cent ash utilisation have been in place for some time now, a substantial quantity of the genera­ted fly ash still remains unutilised. Be­sides this, there is a huge inventory of fly ash from previous years stored in ash ponds. This is in part attributable to the demand-supply mismatch across locations due to limited infrastructure development in the region. Moreover, long distances between TPPs and cement plants as well as manufacturing units of other construction materials increase the cost of transportation (which is to be borne by the genco). Overall, stringent and timely monitoring of ash utilisation, greater awareness of its benefits and an enabled ecosystem are expected to enhance fly ash utilisation, going forward.