The implementation of smart grid technology is the need of the hour to meet consumer requirements for secure, reliable and affordable supply as well as to balance the electricity grid with the increasing penetration of re­ne­wable energy sources. Launched in 2015 under the aegis of the Ministry of Power (MoP), the National Smart Grid Mission (NSGM) supports the development of smart grid projects through assistance for pre-feasibility studies, as well as fu­n­ding of projects and training and capacity building for state-level project management units (PMUs). Apart from this, pilot smart grid projects im­ple­mented by the MoP provide lessons for scaling up smart grid implementation in the co­untry. Under the pilot projects, the discoms witnessed a reduction in the aggregate technical and commercial (AT&C) loss level, and newer IT solutions were taken up and successfully integrated with the legacy system.

Currently, three smart grid projects are being implemented under the NSGM to cater to 363,433 consumers at a cost of Rs 2.47 billion. These projects are being implemented at the Chandigarh Elec­tricity Di­vision (CED) – excluding Sub­division 5, CED Subdivision 5, and Jaipur Vidyut Vitran Nigam Limited’s (JVVNL) six urban towns of Baran, Bharatpur, Bundi, Dhol­pur, Jhalawar and Karauli. The key functionalities of these projects are advanced metering infrastructure (AMI), distribution transformer monitoring units, and supervisory control and data acquisition (SCADA) systems. As of January 2022, a total of 106,671 smart me­ters have been installed under the projects including 19,025 smart meters at CED in Sub­division 5, and 87,646 sm­art meters by JVVNL. In addition to implementing smart grid projects, the NSGM is now supporting the development of the AMI ecosystem in the country. To this end, 20 state-level PMUs have been set up under the NSGM that are hand-holding state discoms for the development of state-specific smart grid roadmaps. Besides, a model standard bidding document has been prepared for the selection and appointment of AMI service providers for smart prepaid metering in India. The NSGM framework, model request for proposal and model detailed project report, and smart meter roll-out plan have also been prepared. The NSGM has developed the smart grid readiness self-assessment tool that takes a systems view of the utility from a smart grid perspective and attempts to analyse each of the distinct utility components (domains) and subsystems (su­b­domains) to create a common and ho­listic evaluation methodology (maturity level). Apart from this, the NSGM’s cost-benefit analysis tool is expected to enable power distribution utilities in the country to perform a holistic analysis of utility modernisation projects. There is also a focus on the development of pilot/demonstration projects in areas such as demand res­po­nse, reliability improvement, microgrids and data analytics.

The smart grid pilot projects sanctioned by the MoP in 2013 have been implemented across  Assam, Gujarat, Hima­chal Pradesh, Haryana, Karnata­ka, Pun­jab, Telangana, Tripura, Pudu­ch­erry, Uttar Pradesh and West Bengal, at a total cost of Rs 2.54 billion. As per data from the NSGM portal, nine projects have been declared completed and have achieved financial closure as of January 2022. Southern Power Distribution Co­m­pany of Telangana’s (TSSPDCL) project in the Jeedimetla Industrial Area of Telangana has been completed and the final claim with the closure report has been submitted. Me­anwhile, Tripura State Electricity Cor­po­ration Limited’s (TSECL) (Electrical Division 1 Agartala, Tripura) project has recently intimated termination.

Overall, around 156,000 smart meters have been installed under the pilot smart grid projects. Following the implementation of smart grid projects, utilities have witnessed a reduction in AT&C losses with six pilots exceeding loss reduction targets. Various features inclu­ding remote connect/disconnect, and demand res­pon­se/peak load management for time-of-day (ToD) tariffs have been tested at all pilot projects. Smart grid pilots showcase the successful integration of the legacy metering billing and collection system with AMI/smart metering. The integration of the smart grid system with RAPDRP was successfully achieved in Tripura, Assam and West Bengal pilots. With regard to consumer readiness, there was some resistance observed during the initial phases of the projects. Consumers were increasingly familiarised with the benefits of smart grid deployments. Overall, consumers have reported an improvement in the quality of power supply. As part of the smart grid projects, consumer portals were also developed at CESC, HPSEB, Indian Institute of Technology (IIT) Kanpur, PED, TSECL, TSSPDCL, UGVCL and WBSEDCL. 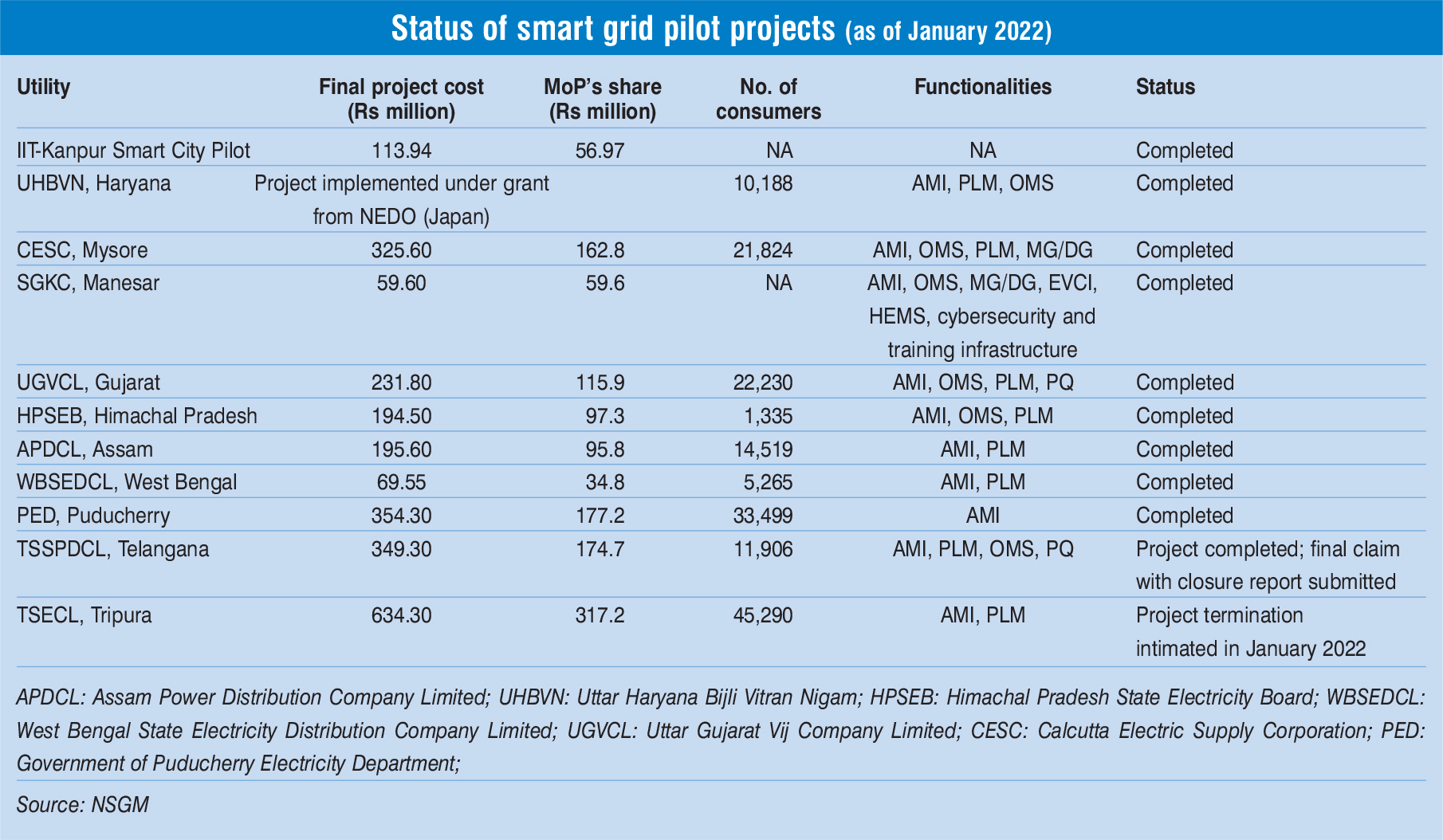 For the successful implementation of smart grid projects, there is a need for discoms to adopt transformational pro­cesses and constitute active internal teams (state-level PMUs) for bringing about change. The skill sets of discom personnel need to be improved with co­ntinuous training and capacity buil­ding programmes. Another important aspect is continuous project monitoring and decision-making by discoms’ top management. Grant releases may be linked with operational performan­ce, that is, funds may be released based on performance assessment, or matching with key performance indicators. Some of the focus areas for smoother implementation of smart grid projects are standardisation of data centres on cloud, RF interoperability, and plug-and-play communication modules. In addition to this, consumer awareness and capacity building remain crucial for the success of smart grid projects in the country.