Egypt, one of northern Africa’s large­st economies and the most crowded country in the Middle East and North Africa (MENA) region with more than 100 million inhabitants, is steadily moving towards clean energy.

The country has achieved an electrification rate of more than 95 per cent. How­ever, due to rapid population growth and an expanding economy, the country continues to witness an increase in energy de­mand. Given Egypt’s limited and dep­leting fossil fuel reserves, the country is now turning to renewable energy to meet the rising power demand.

The Ministry of Electricity and Rene­w­able Energy (MERE) is in charge of de­ve­loping sector plans, recommending el­ec­tricity prices and supervising the study and execution of critical projects. The Egyptian Electric Utility and the Consu­mer Protection Regulatory Agen­cy oversee Egypt’s electricity sector (Egypt ERA).

In the early 2010s, the country’s generation sector faced many challenges, incl­uding an ageing generation fleet (one-third of thermal generation capacity was over 20 years old), fuel shortages, load shedding, and high transmission constraints and losses. To address these cha­llenges, the government focused on fast-tracking the development of the generation sector by developing both mega-scale conventional power plants and renewable energy-based capacity and involving the private sector. Bet­ween 2015 and 2021, around 28.5 GW of ge­n­e­r­a­tion capacity was added to the Egy­ptian power grid, enabling the country to become a power-surplus nation from a power-deficit one.

Egypt has increased its share of renewables-based resources (primarily wind and solar) over the years to reduce its re­liance on fossil fuels. During the past five to six years, the share of renewable energy sources has increased at a CAGR of 35 per cent. The completion of the 1,465 MW Benban solar park in 2019 was a significant achievement in this context. It is the largest solar power plant in the world, with a $2 billion investment.

To support the new generation capacity, the EETC has worked relentlessly on the expansion and strengthening of the country’s high voltage grid. Between 2015 and 2021, around 4,136 km of new lines, 31,875 MVA of transformer capacity and 19 new substations at the 500 kV level were added to the grid.

During 2020-21 fiscal, the EETC invested approximately EGP 7.7 billion to im­p­ro­ve the performance of the electrical network and maintain the quality of electrical supply, with the total amount of energy sold during the year amounting to approximately 189 TWh. The investment was aimed at improving net­wo­rk ef­fi­ciency and reducing losses in or­der to transfer sustainable electric energy from all sources to all customers.

The past investments and initiatives have strengthened the electricity sector with electricity transmission and distribution networks. The sector is capable of absorbing and benefiting from large capacities that will be added from new and renewable energy sources.

Egypt’s efforts to transform its power sector have been supported by financial assistance from multilateral lending in­sti­tutions such as the European Invest­ment Bank, the World Bank, the Arab Fund for Economic and Social Develop­ment, and the Agence Française de Dé­ve­loppement.

The Egyptian government had also an­nounced plans to privatise the electri­city sector by 2025, transforming it from a vertically integrated, regulated state mo­nopoly model to a fully competitive ma­rket. Separating power generation from transmission and distribution is part of the privatisation programme. How­­­ever, little progress has been made in this regard and the 2025 privatisation de­adline is not likely to be met.

The overall goal of Egypt’s Vision 2030 is to achieve a diversified, competitive and balanced economy within the framework of sustainable development. Egypt has vast untapped renewable energy re­so­urces, with a potential to add approximately 90 GW of wind and solar energy capacities. In 2015, the Egyptian government also launched the Integrated

Su­­s­tainable Energy Strategy (ISES) 2035, whi­ch was developed on a least-cost sc­enario. It aims to ensure the energy sector’s technical and financial sustainability while also pursuing energy diversification through renewable energy penetration. The ISES aims to produce 20 per cent of the country’s electricity from renewable energy sources, including so­lar, wind, concentrating solar power and hydro, by 2022, and 42 per cent by 2035. Furthermore, coal has been phas­ed out of the energy mix and replaced with renewable energy. Over the years, the go­vernment has formulated various policies and strategies to attract and in­centivise private sector investment in the renewables’ generation segment. Go­ing forward, the majority of renewable energy projects will be developed by private companies.

Currently, around 3,500 MW of renewable energy ca­pacity is under development on a build, own operate (BOO) ba­sis by the private sector. When this capacity comes online by 2023, it will in­crease the country’s renewable energy ca­pacity to 10,000 MW. Some of the upcoming rene­wable energy projects are a 30 MW solar PV power plant in BenBan un­der the Eu­ro­pean Bank for Recon­struc­tion and Development; the 250 MW Gulf of Suez 1 wind farm set up by the New and Re­ne­wable Energy Authority and expected to generate 1,000 GWh of clean energy; and the 600 MW West Nile solar power project, owned and managed by Sky Power and EETC BOO.

The Egyptian government is focusing on developing green hydrogen. In January 2021, the EEHC signed an MoU with Sieme­ns to jointly develop a hydrogen-based industry with export capability.

A cooperation agreement was also sign­ed in March 2021 between the EEHC, Abou­kir Ports Construction and Mana­ge­ment Company, Egyptian Na­tional Gas Hold­ing Company, and a consortium of Bel­gi­an companies including Dredging, En­viron­mental and Marine Engineering NV, Fluxys, Port of Antwerp, to prepare a fea­sibility study for establishing a green hydrogen production project (HYPORT-EGYPT) covering various locations in Egypt. The Egyptian government has also signed an MoU with Italian company Eni to work on joint projects for the production of green and blue hydrogen. Also, the world’s first 100 MW project ba­s­ed on green hydrogen is expected to come online in Egypt. This project will be developed in collaboration with Egy­pt’s Orascom, Norway’s Scatec, and the wo­r­ld’s largest export-focused nitrogen fe­rtiliser platform Fertiglobe. The comp­letion date for this project is set for October 2022, just in time for COP27.

To meet the rising demand, the country is not only shifting towards generating more energy from renewable resources, but it is also looking for different environmentally friendly ways to meet the future demand and make the country an energy hub.

The Egyptian government is looking to develop projects based on waste-to-en­ergy (WtE) technology to meet the future demand. According to the Minis­try of Environment, 20 per cent of all collected municipal solid waste (MSW) will be directed to WtE technologies (ab­out 4.2 million tonnes of MSW to WtE). Electri­city generated from WtE plants could reach 300 MW in the next five years in Egypt.

Egypt as an energy hub

The country plans to transform itself into a regional energy hub, exchanging electricity with Arab, African and Euro­pe­an countries. Egypt intends to stren­gthen its regional cross-border links as well as build new high capacity lines connecting to European and Middle Eastern countries in order to meet this ambitious goal. The following are some of the major planned interconnection projects.

Egypt-Saudi Arabia Grid Interconnec­tion Project: The EETC and National Grid SA, a subsidiary of the Saudi Electricity Com­pa­ny, are developing an interconnection project that aims to connect the grids of Egypt and Saudi Arabia. The project en­tails the construction of a ±500 kV multi-terminal high voltage direct current (HVDC) link from Badr in Egypt to El-Madinah El Munawara via Tabuk in Saudi Arabia. The interconnector will have a transfer capacity of 3,000 MW. It will allow Egypt and Saudi Arabia to capitalise on differences in their peak power de­ma­nd times, facilitate trade, and generate cost savings of around $3.7 billion. The package of contracts for the electrical in­terconnection was signed in October 2021. The investment for the Egyptian side is estimated at $1.8 billion.

Egypt-Jordan Grid Interconnection Project: Currently, the interconnection capacity between the two countries is 450 MW. The two countries are looking to increase this capacity to 1,100 MW. For this, a 27 km, 400 kV overhead line and a 12 km undersea cable connecting Taba (Egypt) and Aqaba (Jordan) is proposed to be constructed. The project will cost Euro 198 million, with Euro 62 million going towards the construction of new transmission facilities and the re­maining Euro 136 million going towards reinforcement work in the respective countries. The project’s feasibility study is currently under way.

Egypt-Sudan Interconnection Pro­je­ct: The first phase of this project, which en­tailed the construction of a 220 kV interconnection line from Toshka in Egypt to Wadi Halfa in Sudan, was energised in April 2021 to enable 80 MW of power exchange between the two countries. Phase II entails increasing the ex­change capacity to 300 MW. For this, static synchronous compensators (STAT­COMs) are being installed by Sie­me­ns at the Dongola and Merowe stations in Sudan. The substations are ex­pe­cted to be completed in April 2023. In the longer term, the aim is to further bo­o­st the po­wer exchange capacity bet­we­en the two countries to 1,000 MW. 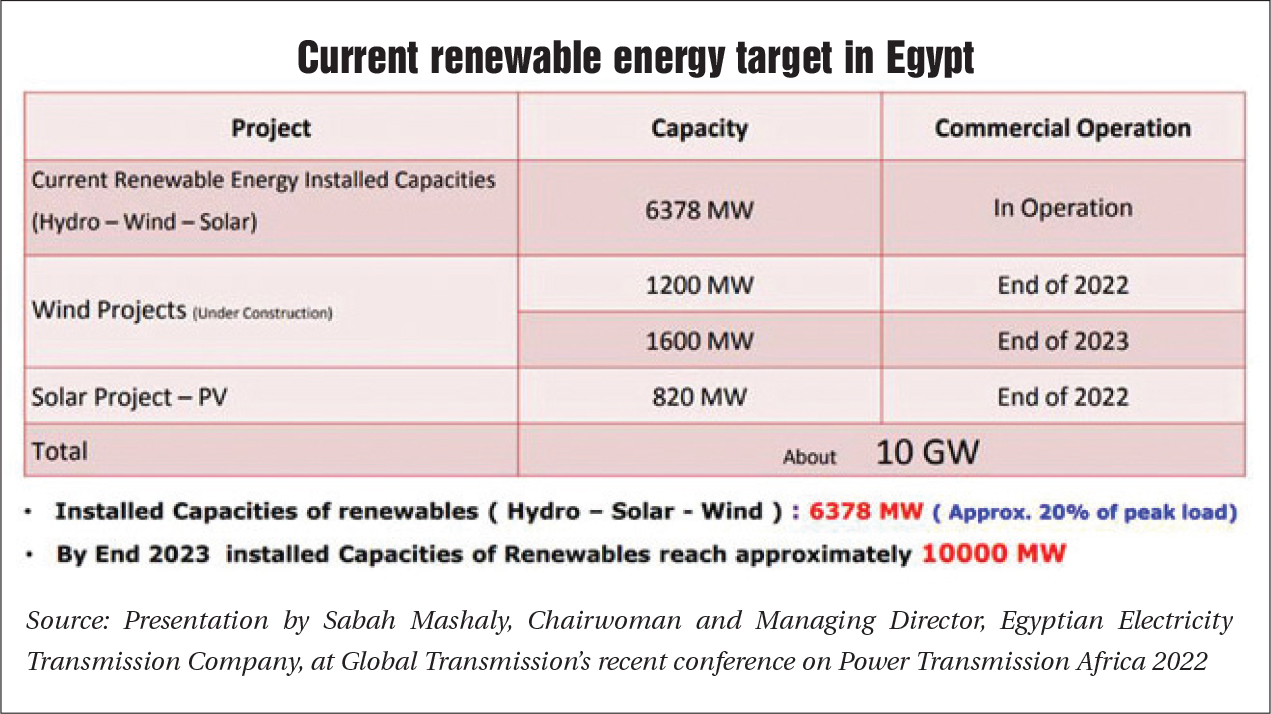 EuroAfrica Interconnector: The project will link the electricity grids of Egypt, Cyprus and Greece via a subsea direct current (DC) cable and onshore HVDC converter stations. In its initial stage, the interconnection will have a transmission capacity of 1,000 MW, which will later be increased to 2,000 MW. The line will run from Damietta in Egypt to the Kofinou station in Cyprus via a subsea route. Furthermore, Cyprus will be link­ed via another subsea route to Korakia in Crete (Greece), and from th­e­re the cable route will continue to Atti­ca in mainland Greece. The interconnector will be 1,707 km long and will include the construction of four converter stations – one in Egypt, one in Cyprus, one in Crete and one in Attica – with the multi-terminal operation to connect Egypt to Greece via Cyprus. Currently, technical studies for the undersea link are under way.

Egypt-Jordan-GCCIA: The planned grid connection aims to establish a link bet­ween the Gulf Cooperation Council In­terconnection Authority’s (GCCIA) existing grid network, which connects its six member countries – Kuwait, Saudi Ara­bia, Bahrain, Qatar, Oman and the UAE – via a 1,400 km, 400 kV overhead line (OHL) to the interconnection point in Jordan, and then with Egypt via a 780 km, 400 kV OHL. The existing in­ter­con­nection project was established in 2001 and has a transmission capacity of up to 1,200 MW.

The first phase of the proposed interconnection transmission link is expec­ted to transmit 2,000 MW of power bet­ween the GCC countries, and Egypt and Jordan, but the transmission capacity may be increased depending upon their power demand. The project aims to enhance the reliability of power systems, improve energy quality and further establish an energy market in the Arab region.

The EETC, Jordan’s National Electric Power Company and the GCCIA recently reached an agreement on the founding principles of this project. The three parties have agreed on an action plan to complete the required procedures before the end of 2022 – preparation of a business case report outlining the benefits of the interconnection (based on a feasibility study) and regulatory structure, in addition to risks and financing options.

In light of the ISES 2035 renewable en­ergy targets, Egypt’s transmission utility is working to build a strong grid network to evacuate power from planned generation capacity and supply it to its customers across the country. The country is also looking to fully utilise its strategic geographical location and develop various grid interconnections with North African, Arab and Mediterranean countries to facilitate power trade, thereby driving the country’s economic growth and development.

To fully reap the benefits of the upcoming capacity and establish cross-border inter­connections, future transmission investments are expected to be largely directed towards developing the grid infrastructure to evacuate power from new generation plants, including a significant number of renewable energy projects. Invest­ments are also envisaged in grid refurbi­shment and modernisation.