At the COP26 global climate summit in Glasgow in November 2021, India set an ambitious target to re­a­ch net zero emissions by 2070. Fur­ther, it anno­unced that it would increase its non-fossil energy capacity to 500 GW and meet 50 per cent of its energy re­q­uire­ments from renewable energy by 2030. Solar power, with a total potential of close to 750 GW, is expected to play a major role in helping the country achie­ve this target. However, un­like historical trends, the focus will be on not only utility-scale but also rooftop so­lar, including residential rooftop, to sc­a­le up In­dia’s solar capacity.

The country’s installed solar capacity st­an­ds at 50,778 MW as of February 2022. Of this, 6,476 MW is rooftop solar based, 1,480 MW is off-grid and the rest is grou­nd mounted. The period April 2021 to Feb­ruary 2022 saw rooftop solar capacity additions of close to 2,036 MW against 7,176 MW for ground-mounted solar. While historically, rooftop solar has been preferred by institutional and commercial and industrial (C&I) consumers, it has now also started gaining traction in the re­sidential segment, which, until recently, was considered a challenging market to tap. The attractive cost economics of sol­ar power, discom-led interventions, gove­rnment subsidies and increasing environment-consciousness amongst consume­rs are contributing to this transition.

This article examines the benefits of residential rooftop solar, as well as the en­ab­ling policies and uptake trends in this up-and-coming segment…

A 2021 global study found that India has a rooftop solar potential of 1.7 PWh per year against its current electricity de­ma­nd of 1.3 PWh per annum. The stu­dy was co-authored by Priyadarshi Shukla, a pro­fessor at Ahmedabad Uni­ver­sity; Shi­vi­ka Mittal from Imperial Co­­ll­ege, Lon­don; and James Glynn from Colum­bia University, USA. Siddharth Jo­s­hi, re­se­ar­cher at MaREI, the SFI Resear­ch Centre for Energy, Climate and Marine at Uni­ver­sity College Cork, led this team. The study also found that India is the most cost-effective country for generating roof­­top solar energy at an attractive price of $66 per MWh. With the domestic consumer segment accounting for more than 20 per cent of the energy demand in the country, there is immense scope to solarise this space.

The benefit of rooftop solar is that it does not need large tracts of land; it can be de­ployed on any appropriate roof. Thus, roof­tops of houses, corporate buildings, industries and warehouses, school and college campuses, hospitals and other in­stitutions are all suitable for rooftop solar installati­o­ns, which automatically creates a very lar­ge untapped potential market. Fur­ther, roof­­top solar power is generated and consumed locally, without the need to transmit it over long distances, which is a ma­jor co­ncern with utility-scale solar farms.

Rooftop solar is highly versatile with a variety of possible business models, de­pen­ding on the power offtaker. For instan­ce, in the capex model, the power offtaker owns the solar project and the develop­er merely installs it for a fee. In the opex mo­del, the developer owns and installs the system at the offtaker’s pre­mi­ses for a mutually agreed solar power procurement tariff. The opex model can also have variations, inclu­ding a power purchase agreement (PPA) model or a leasing model. The opex model has proven to be highly successful in the C&I solar space, giving developers the op­portunity to expand their portfolios, and en­ergy-intensive consumers the choi­ce to re­duce their power bills using cost-competitive quality solar power without ha­ving to worry about financing or even operating the solar installation.

In some cases, progressive discoms tie up with developers to scale up rooftop so­lar capacities in specific localities in their areas. A slew of tenders has been witne­s­s­ed in this space in recent mont­hs. Dis­com-led rooftop solar deployme­nt is one of the major drivers of growth in the residential solar segment. In a few cases, co­mmunity-based solar power deployment is also being explor­ed, especially in the ca­se of housing societies and resident welfare associations.

To promote growth in the residential rooftop solar space, the Ministry of New and Renewable Energy (MNRE) is im­ple­me­nting the Rooftop Solar Program­me Phase II with an aggregate target of 4,000 MW in the residential space, to be implemented by 2022. The scheme was laun­ched in March 2019 and the MNRE is providing central financial assistance (CFA) at different levels to support this progra­m­me. For individual households, CFA up to 40 per cent of the benchmark cost is provided for rooftop solar plants of up to 3 kW capacity and 20 per cent for plants of capacity above 3 kW and up to 10 kW. A clarification released in the later part of the year stated that rooftop solar installations of 3 kW to 10 kW capacity would get a su­bsidy of 40 per cent for the first 3 kW and 20 per cent for the remaining capacity. Ins­tallations above 10 kW will get 40 per cent for the first 3 kW and 20 per cent for the next 7 kW. According to the stateme­nt, no subsidy will be app­licable on rooftop solar systems for ca­pacities above 10 kW. For group housing societies or resid­ent welfare associations, CFA is limited to 20 per cent of the benchmark cost for projects of up to 500 kW capacity used for supplying power to common facilities. The programme is being im­plemented throu­gh discoms and residential consumers se­eking CFA need to approach the local discom for installing the rooftop solar plant and obtaining the CFA.

Some important policy developments have taken place early this year to simplify the procedure for residential con­su­­mers to set up rooftop solar projects and obtain subsidies. Consumers can ei­ther install the rooftop solar plant themselves or get it done through a vendor of their choice through the national portal for ap­plications. This method is in addition to the procedure for installing roof­top solar plants through vendors empa­ne­ll­ed by the respective discoms. A na­tio­nal platform will reportedly be set up for registering beneficiary applications and appro­vals, and for tracking their progre­ss. How­ever, till the time this na­tional platform is re­­ady for use (it is expected to take a mo­nth or two), resi­de­ntial consumers will have to go through discoms for setting up rooftop solar plants.

The MNRE has issued a streamlined protocol for residential consumers to avail of this alternative upcoming facility. To obtain the subsidy, households need to inform the discom about the installation and provide a photograph of the system that has been installed. The discom will have to be given intimation of the installation through a letter or on the designated website. The discom will ensure that net metering is provided within 15 days of the information being received. The government subsidy will be credited to the account of the ho­useholder by the discom within 30 days of the installation. 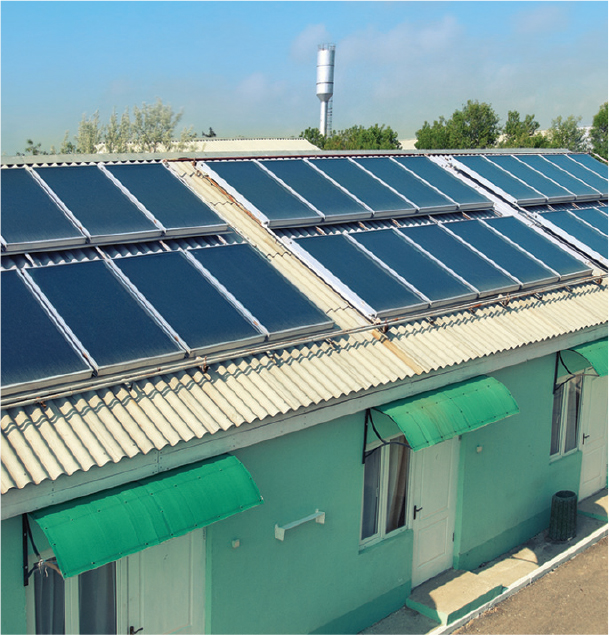 With these policy interventions and discoms realising the benefits of rooftop solar to manage their power demand and improve supply, the residential roof­top solar market is finally showing signs of gr­o­wth. Forward-looking discoms are be­co­ming demand aggregators and tying up with developers to expand roof­top solar ca­pa­city while others are helping consumers with financing to set up solar projects. Me­anwhile, most discoms are em­panelling vendors to make it easy for consumers to select installers.

Perhaps the most laudable efforts have been those of Delhi’s discoms – BSES Raj­­dhani Power Limited (BRPL) and BSES Yamuna Power Limited (BYPL). In 2018, BRPL launched the Solar City initiative to increase rooftop solar installations in Del­hi. In the first phase of the initiative, arou­nd 25 housing societies installed solar capacities of 1.5 MW. The tariff discovered through competitive bidding in Dwarka was Rs 2.66 per kWh, which is much low­er than the existing electricity tariff char­g­ed by the discom. In the later part of 2018, BRPL launched the second phase of its Solar City initiative to cover the residential areas of Sha­kur Basti with an estimated rooftop solar potential of 15 MW. In Nov­ember 2019, BRPL partnered with Power Ledger, a blockchain-based renewable energy trader, to launch trials for a peer-to-peer energy trading platform.

Further, under the Suprabha progra­m­me led by the World Bank, BYPL app­ro­ached about 300 housing societies in East Delhi for rooftop solar uptake. The two discoms then partnered with Smart­Power to inc­rea­se uptake of rooftop so­lar plants at the com­munity level, which entitled consu­me­rs to premium financing options for setting up solar systems under a capex model. Further, the excess solar power generated will be purchased by the discoms at a predetermined rate. Other cities such as Chandi­garh, Benga­luru, Gurugram, Mum­bai and Pune are also witnessing increas­ed uptake of ro­of­top solar power, with various residential societies in these cities installing rooftop solar projects.

With the success of these programmes, discoms across various states have also started taking significant steps in this area. In March 2021, the Gulbarga Elec­tri­city Supply Company invited bids for the development of 10 MW of grid-connected rooftop solar systems with net metering on residential buildings across various re­gions in Karnataka. The tender was issu­ed under the government’s So­u­ra Gruha Yojane in the districts of Bidar, Kalabur­agi, Yadgir, Raichur, Kop­pal, Ballari and Vija­yanagara. The tender was reissued in Se­ptember 2021. In August 2021, West Be­­ngal State Electri­city Dis­tri­bution Com­pany Limited in-vited bids for empanelling agencies to install 50 MW of grid-conne­cted rooftop solar projects on residential buildings across West Bengal. In October 2021, Gujarat Urja Vikas Nigam Limited decided to ex­tend its residential rooftop so­lar progra­mme from 600 MW to 750 MW. It agreed to allow registration of residential roof­top solar applications for up to 750 MW of capacity from empanelled vendors for 2020-21 under the SURYA-Guja­rat programme.

In another initiative, Tata Power has been contracted by Kerala State Elec­tricity Bo­ard Limited (KSEBL) to develop 84 MW of rooftop solar capacity across all districts of Kerala. The project is intended for do­mes­tic consumers. Un­der the agreement, Tata Power will im­plement projects of 64 MW for individual households and 20 MW for housing societies. The tender for this project was announced by KSEBL in Fe­bruary 2021 under the Soura Subsidy Sc­heme in the Domestic Sector. Aside from this, Tata Power has set up over 10 MW of in­stallations of 1-5 kW each in the reside­ntial segment in Kerala with ANERT, and 32 systems of 5 kW each at the Suvidha Housing Society in Bengaluru. The company also provides attractive financing so­l­utions to attract residential consumers.

Other companies such as Oorjan and So­larify also provide a bouquet of services in the residential solar space, in­cluding funding, installation and maintenance.

Despite the massive potential for roof­top solar in the residential segment, de­ployment has been limited so far. The key factors for this slow growth are the lack of awareness amongst consumers ab­­out the various government policies and benefits of rooftop solar, preconcei­ved no­tions about high capital costs and lack of fin­ancing options, low resi­de­ntial tariffs, and the fear of getting st­uck in bureaucratic problems.

However, most of these issues have been addressed through government incentive schemes as well as financing optio­ns provided by various private players and some local discoms. The launch of the national portal for applications will further streamline the processes for ap­p­lications and su­bsidies, thereby removing bureaucratic de­lays. Given that residential tariffs are relatively low, rooftop solar may be more beneficial for high-power-consuming ho­useholds, large farmhouses and residential societies.