Renovation and modernisation (R&M) of existing hydroelectric plants (HEPs) is a crucial activity that contributes to improving a dam’s generating potential and operational  efficiency, cutting operations and maintenance expenses, improving flo­od control, and prolonging a plant’s life by 20-30 years. Large hydro projects need considerable financial outlays as well as 7-10-year gestation periods (along with a strong possibility of time and cost overruns). Moreover, setting up new HEPs is challenging in view of various statutory and land clearances, rehabilitation and resettlement (R&R) issues, resistance from the local population, etc. However, R&M requires fewer clearances and does not entail the challenges of statutory and land clearances, and R&R issues involved in setting up new projects.

Under the Central Electricity Authority’s R&M programme for HEPs, during the Twelfth Plan period of 2012-17, around 21 projects (two central and 19 state) aggregating 4,149 MW were taken up for R&M, yielding a cumulative benefit of 549 MW. Overall, R&M works at 104 hy­dro­power projects with an aggregate in­s­talled capacity of 20,611 MW were completed by the end of the Twelfth Plan period (in 2016-17) and a total benefit of 3,636 MW was accrued through life extension, uprating and restoration. Of these, 21 plants belong to the centre and the remaining 83 to various states.

During 2022-27, RMU&LE works at 57 HEPs (seven in the central sector and 50 in the state sector) with an aggregate ca­pacity of 9,016.30 MW are programmed for completion. Of the total capacity, 1,723.35 MW will be completed through R&M at 10 HEPs, 6,717.95 MW through life extension at 39 HEPs and 575 MW th­rough life extension and uprating at eight HEPs. In these eight HEPs where both life extension and uprating are en­visaged, the aggregate capacity of 575 MW will be uprated to 637.5 MW, resulting in an additional benefit of 62.5 MW. As such, the revised aggregate capacity after RMU&LE works of these 57 projects will be 9,078.8 MW. Of the projects planned to be completed during 2022-27, R&M work was under implementation at 22 HEPs aggregating 3,892 MW of capacity, as of December 2021. Mean­wh­­ile, other projects were at various sta­­­ges of implementation, including detail­ed project report (DPR) preparation, re­sidual life assessment (RLA) stu­dies and tendering. 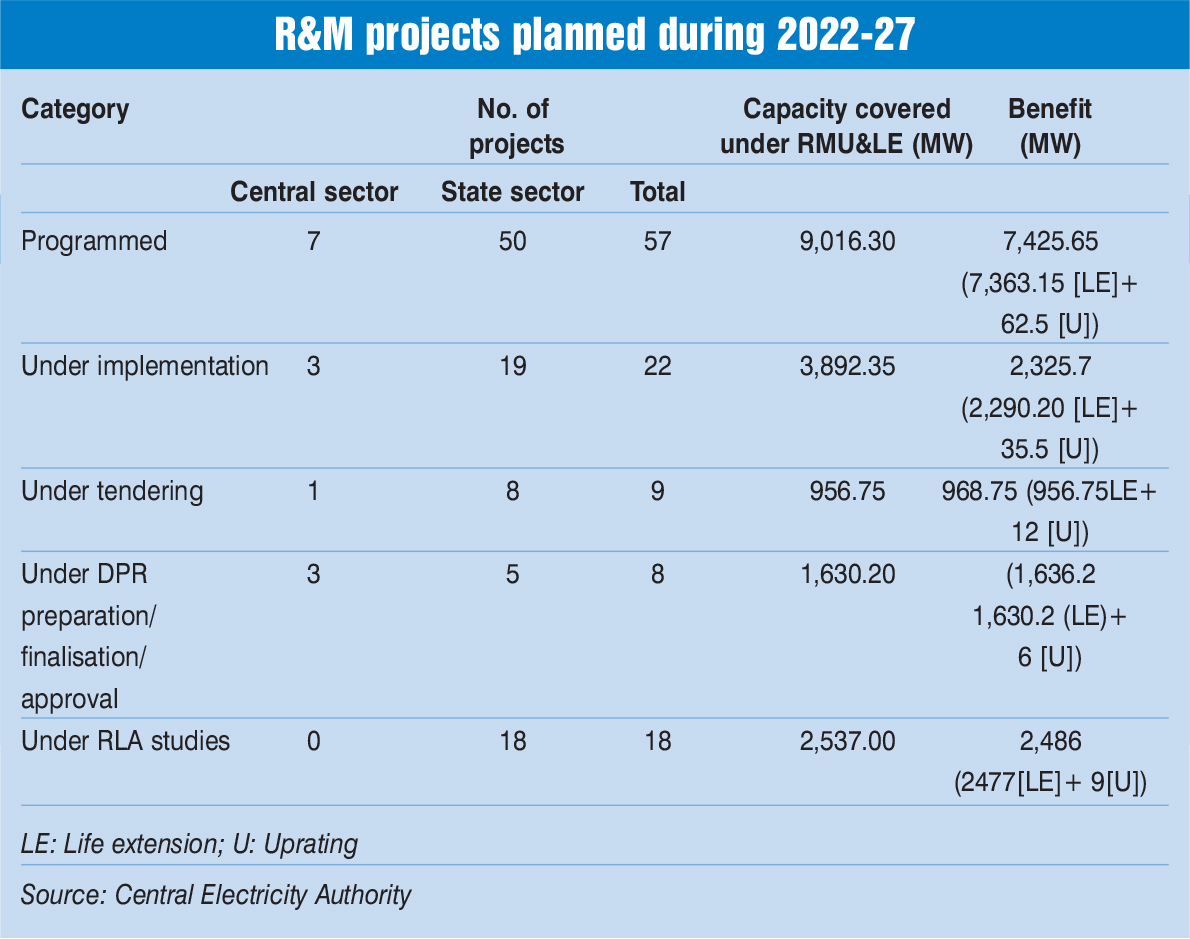 A key challenge to the execution of R&M works is the lack of adequate policies or guidelines, as a consequence of which uti­lities frequently do not carry out these ac­tivities. As a result, utilities do not prioritise DPR planning, resulting in issues during the bid stage and delays in R&M work. Furthermore, a dearth of compete­nt contractors and consulting firms im­pedes the implementation of such works.

Another challenge in performing R&M at HEPs is a lack of skilled contractors and consulting firms. As a result, contra­c­ts for R&M work are frequently offered to incompetent organisations, resulting in large project delays and substandard work. Also, ample financial resources are necessary for the successful execution of R&M initiatives. Utilities need to be provided with timely budgetary allocations to enable them to firm up the financial requirement in the DPR.

R&M requires technical, commercial and regulatory assistance. The technical features of a hydro plant R&M include an in-depth examination of the residual life assessment, finalisation of the scope and a thorough report on individual sections that require attention and refurbishment in order to increase the plant’s production. A good DPR is vital for the programme’s proper implementation. In order to realise the full benefits of R&M work, it is essential to adopt a holistic approach for R&M of HEPs rather than piecemeal interventions, which fail to deliver the desired benefits. As such, a variety of measures are required to address these concerns. For the successful im­plementation of R&M at HEPs, appropriate financial assistance, timely collaboration with relevant agencies and permissions and clearances from relevant authorities are essential. Additiona­lly, generating unit shutdowns must be scheduled and coordinated in order to complete the repair on time.

An HEP is typically rehabilitated at the end of its functional life, that is, after 30-35 years. However, considering that hy­dro plants are vulnerable to silt erosion (particularly in the Himalayan region), which results in forced outages, industry observers believe that R&M work should begin considerably sooner than 35 years. Going forward, hydro­po­wer, with its unique features of fast ram­ping and black start, is expected to play a critical role in grid balancing with lar­ge-scale integration of renewable energy sources. Since R&M of HEPs offers a cost-effective and time-efficient soluti­on for augmenting hydro capacity, this is expected to gain further traction. Overall, good project ma­­­na­gement, proper planning and de­tailed DPR preparation, and financial su­pport are critical for the successful implementation of R&M works at HEPs.