The renovation and modernisation (R&M) of power plants is a promising solution to upgrade old units in order to increase generation, reduce emissions and enhance flexibility. A centrally sponsored scheme was launched in 1984 for R&M and life extension (LE), benefiting several thermal generating units over the years. In February 2020, the revised policy guidelines for R&M/LE of coal/lignite-based stations were released by the Cen­tral Electricity Authority (CEA) to align them with the changing requirements of the power sector.

R&M is now not limited to plant performance improvement. With the country’s goal to cut carbon emissions by 1 billion tonnes (bt) and lower emissions intensity of GDP by 45 per cent by 2030, the ins­tallation of emission control equipment at thermal power plants (TPPs) is crucial, which requires R&M. In addition, TPPs need to be made more flexible to in­corporate the growing share of renewables, which is targeted to meet India’s 50 per cent energy needs by the end of this decade. This too would necessitate R&M of TPPs to increase their ramp rates and adjust to cyclic load variation.

Further, there is a need to prepare TPPs for biomass co-firing so as to lower their water consumption and thereby reduce their environmental footprint. The earlier guidelines were framed primarily for unit ratings of 100 MW or less and 200/210 MW units. However, in recent years, many units of higher ratings like 500 MW have outlived their lives and need R&M/ LE interventions. In view of this, the revised guidelines were released. 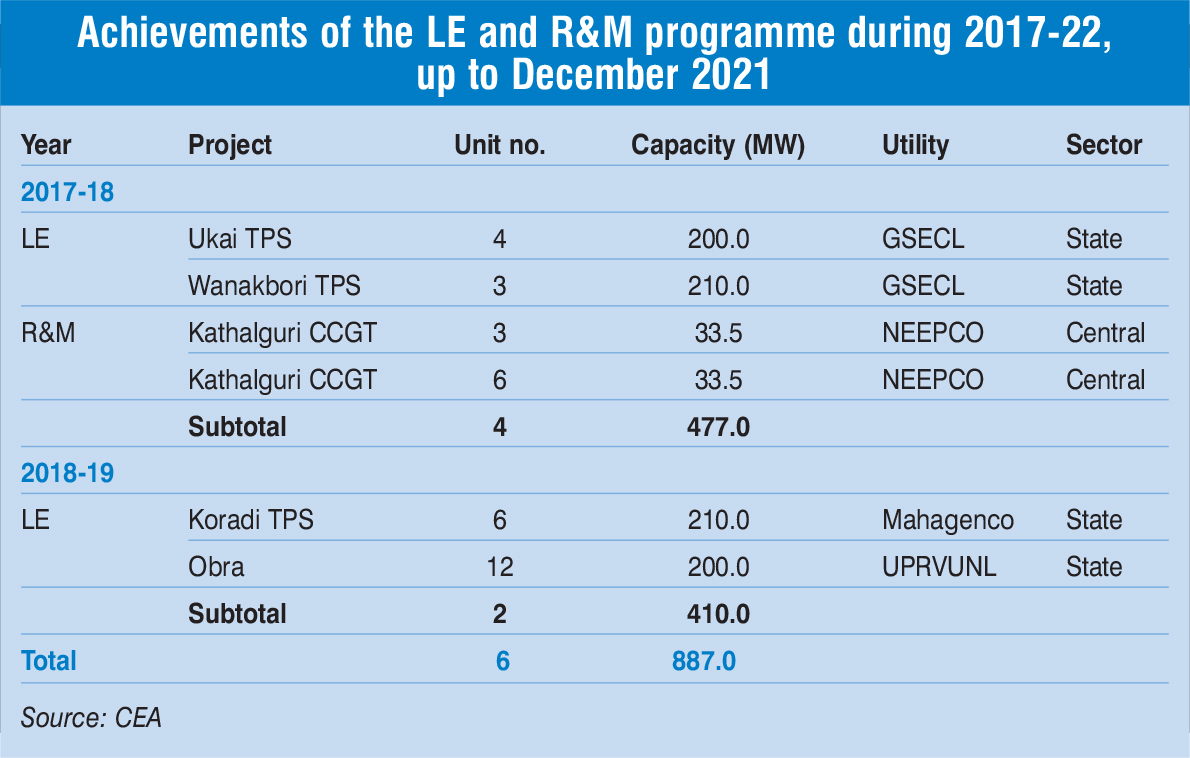 As per the CEA, flue gas desulphurisati­on (FGD) systems have been planned for 439 units aggregating 168.9 GW to redu­ce SOX emissions. As of December 2021, bids have been awarded for 157 units aggregating 69,260 MW. This represents 41 per cent of the total planned capacity. Sector-wise, bids have been awarded for 114 units in the central sector, 31 units in the private sector and 12 units in the state sector, representing 87 per cent, 28 per cent and 8 per cent of the respective sector planned capacity. Apart from this, a notice inviting tender has been issued for 132,167 MW of ca­pacity or 325 units.

The TPPs have been categorised as per the revised timelines for meeting the emission norms. Category A comprises TPPs within a 10 km radius of the NCR or cities that have a million-plus population, and are required to meet the emission norms by December 2022. Category B comprises TPPs within a 10 km radius of critically polluted areas or non-attainment cities, which would have to meet the norms by December 2023. Category C will comprise all other plants, which have been given an extension till Dec­ember 2024. TPPs declared to retire be­fore December 31, 2025 are not required to meet the specified norms if they submit an undertaking to the Central Pollu­tion Control Board (CPCB) and the CEA for exemption on grounds of retirement. An environment penalty will be impos­ed on non-retiring TPPs for non-compliant operation beyond the specified timeline. A task force constituted by the CPCB has assigned 596 coal-based units to the three categories. Accor­di­n­gly, 79 coal-based units (13.3 per cent) fall un­der Category A, 68 units (11.4 per cent) un­der Category B and 449 units (75.3 per cent) under Category C. As a re­sult, nearly 75 per cent of the TPPs in India are not liable to meet the emission nor­ms before 2024. 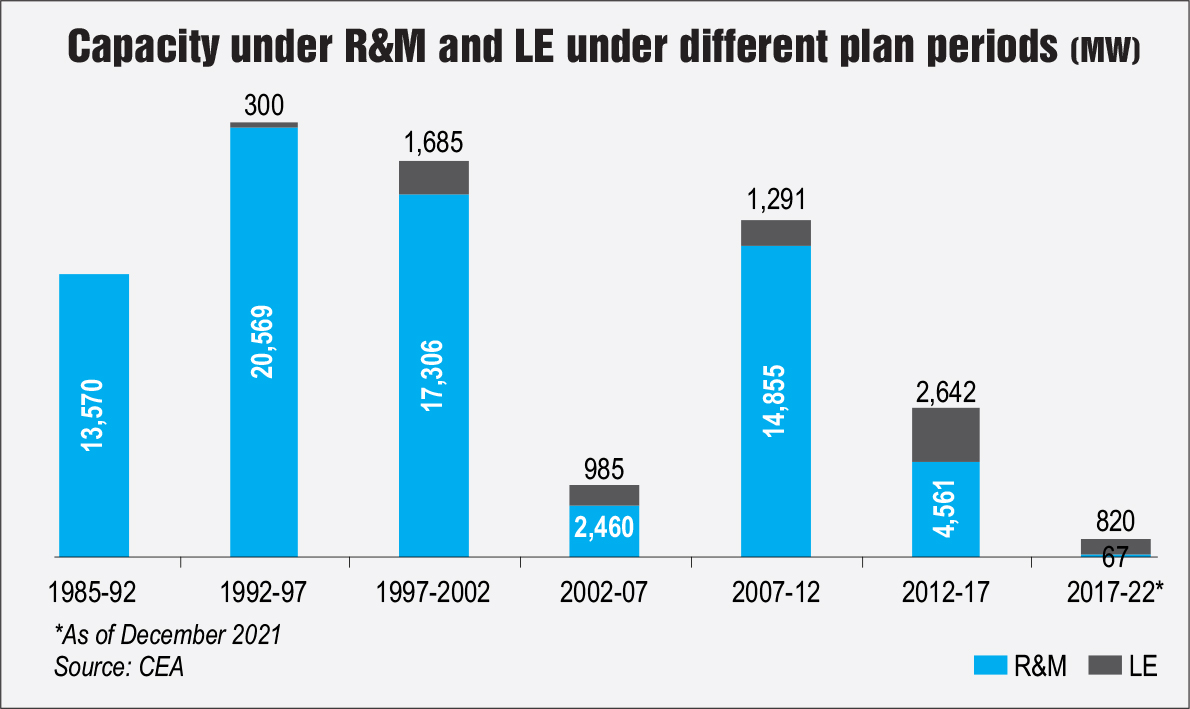 For the control of particulate matter (PM) emissions, most TPPs have alrea­dy in­stalled electrostatic precipitators (ESPs) since Indian coal has high ash content. However, upgraded systems wo­uld be required for the existing projects. In addition, the environment mi­ni­stry’s decision to do away with coal wa­shing makes it more important for TPPs to invest in efficient PM control te­­ch­nologies. A detailed phasing proposal has been prepared by the CEA, outlining the plan of action for the augmentation of ESPs for PM control up to 2024. As of June 2021, ESP implementation plans were available for 222 units agg­regating 64.5 GW.

The CEA has constituted a committee to oversee the implementation of measures for flexible operation of TPPs on the basis of pilot tests. So far, Bharat He­avy Electricals Limited (BHEL) has undertaken pilot tests at NTPC’s Mauda TPS and West Bengal Power Develop­ment Cor­po­ration Limited’s Sagardighi TPS. BHEL has also carried out flexibilisation pilots at GSECL’s Ukai Unit 6 where a minimum load of 40 per cent at a ramp rate of 3 per cent was achieved successfully. Likewise, up to 40 per cent loading tests were carried out at Mai­th­on Power Unit 2 as of July 2021.

Typically, mid-life R&M is carried out after 100,000 hours of operation of a thermal unit. However, given the effects of cy­cling of thermal generating units in terms of increase in stress, creep-related failu­r­es, etc., residual life ass­ess­ment and R&M are required at a mu­ch earlier stage. Go­ing forward, utilities are expected to ad­opt a holistic approa­ch to R&M/LE in order to meet the en­vi­­ronmental norms as well as the flexibilisation targets.