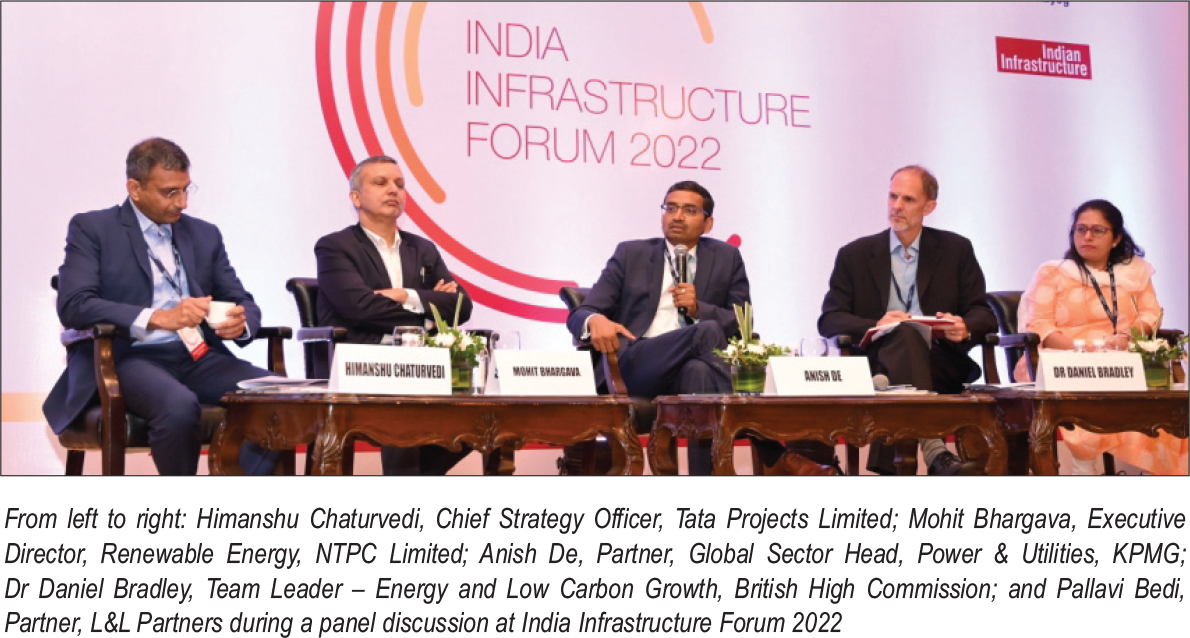 Energy security and sustainability are in­terdependent. Energy security and clean energy transition agendas are completely inseparable, especially with the ongoing energy price volatility. With the Russian-Ukraine crisis as well as cyclical factors, international coal pri­ces have reached $400 per tonne, while spot natural gas prices range between $35 per mmBtu and $40 per mmBtu. It has, therefore, become im­pe­rative to create a power supply system that is re­silient and not affected by energy price volatility. Renewable energy offers the ideal solution in this regard as it can absorb these shocks if and wh­en they happen in the future.

If India has to wean itself from fossil fuels, power generation companies have to step up and transition towards clean energy generation. The country’s largest generator, NTPC has already announced its shift to renewables. The public sector major has a target to have an installed renewable energy capacity of 60 GW by 2032. It aims to have a renewable portfolio as large as its thermal portfolio. Loo­k­ing ahead 10-20 years from now, NTPC’s portfolio will comprise 50-55 per cent of renewable energy including hy­dro and the remaining from thermal so­urces. The company also plans to decarbonise its thermal power plant fl­eet, not necessarily through carbon capture but also through other fuels such as biomass-based fuels, green methanol and green ammonia, which can replace coal in boilers. In addition, it is taking st­e­ps towards energy conservation, e-mo­bility and waste-to-energy. Notably, NTPC is also looking at nuclear power, particularly because its role will grow in order to provide resilience and reliability to the power system since the supply of round-the-clock power at high availability at each time block is still a challenge with renewable energy.

In order to accelerate energy transition, India can take cues from global experiences. For instance, the UK has made a fast transition away from fossil fuels. The country has one of the largest offshore wi­nd power capacities in the world and clean energy transition is the highest pri­ority for the UK. Further, decarbonisation needs to be pursued across other sectors apart from energy as well. Sec­tors such as building, cement and construction also have significant potential in this regard.

Green hydrogen is a potential alternative to fossil fuels in various hard-to-abate sectors such as refineries, fertilisers, and iron and steel industries. India is already a large consumer of hy­drogen and its co­nsumption is slated to grow exponentially as the economy gro­ws. Even if we consider 20-25 per cent substitution by green hydrogen in a time frame of 20 years, electricity generation capacity of 300-400 GW will be required.

The cost of green hydrogen is a concern but it is expected to decline. The cost of green hydrogen (before the recent spurt in gas prices) was three times the price of grey hydrogen produced using natural gas. Currently, due to the decline in international oil and gas prices, the price of green hydrogen is competitive vis-à-vis grey hydrogen, at least in the short term. Even in the long run, investments in the upstream oil and gas sector are unlikely to increase, owing to the ongoing energy transition, and therefore, gas prices may not reach pre-Covid/Covid levels. If the cost of green hydrogen comes down to $2 per kg vis-à-vis $3.5-4 per kg, it will be cheaper than hydrogen produced throu­gh steam methane reforming. How­e­ver, India needs to ramp up its eff­o­rts in the se­gment and there is a need to create in­dustrial capacity. Current ef­forts on the green hydrogen front are mostly sub-scale and only small tenders, typically for pilot projects, have been re­lea­sed in re­cent months. There is a need for government support for creating de­mand as well as subsidies.

Regarding applications, green hydrogen will mostly be utilised by industries (re­fineries, fertilisers, steel, etc.) in the short run and probably long-haul shipping and air transport in the long run. Green hydrogen is not really an effective option for electrification, owing to lower round trip efficiency as well as a source of storage due to unfavourable economics.

Notably, NTPC is running a pilot project wherein it is capturing carbon dioxide and mixing it with green hydrogen to ma­ke green methanol, which can be fi­red in boilers to generate electricity. The company is quite positive about the pro­je­ct as it would meet three of its req­uirements – reducing carbon dioxide em­issions, using renewable energy and utilising green hydrogen. The replacement of even 25 per cent of coal with gr­een methanol will significantly help the public sector undertaking to decarbonise its operations.

The distribution segment is the Achilles’ heel in the power value chain. Distri­bution utilities are oblivious to their ob­li­gation to serve load or meet customers’ demands. Several tenders have been awarded by the Solar Energy Corpora­ti­on of India but utilities have not signed power purchase agreements.

The policy and regulatory regimes are full of loopholes. The draft amendments to the Electricity Act, 2003, are yet to see the light of day and many of the amendments need to be revised for greater cla­rity. The framework for storage and an­ci­llary services is not lucid enough. Th­o­u­gh a policy on green hydrogen has been notified, there is a need to provide more details to stakeholders.

There is a need to uncomplicate the regulatory framework in the renewable energy sector. It is essential to open up the supply side of the power value chain, while preventing distribution utilities and regulators from posing hurdles. Fur­ther, there are major tariff barriers that need to be addressed. Several char­ges and taxes need to be rationalised. The policymakers’ intent should be to have greater competition, minimum re­gula­tion and proper accountability. Cur­r­ently, the government is still quite deeply in­volved in the renewable energy market for creating demand and framing rules for auctions, which is fine to an extent, but beyond a point, the government’s in­c­reasing role may create legal hurdles.

The country has been adding 10-15 GW of renewable energy capacity every year but we need to add up to 40 GW. Further, if green hydrogen comes into play, the country would need 1,500-2,000 GW of renewables by 2047. In order to add re­newable energy capacity of this magnitude, the manufacturing capacity of mo­dules and other equipment would ne­ed to be scaled up manyfold. There is a se­ve­re shortage of modules in the domestic market today and rules have been fra­med to discourage imports from Chi­na. The manufacturing facilities co­ming up under the production linked incentive scheme will take 24-30 months to become operational.

Net, net, the country’s prospects of clean energy transition are promising but significant work is to be carried out on the gr­ound to address various challenges.