Incorporated in 2007, post the un­bundling of the erstwhile West Bengal State Electricity Board, West Bengal State Electricity Distribution Company Li­­mited (WBSEDCL) serves a consumer base of around 20.78 million (as of Mar­ch 2021) and accounts for more than 80 per cent of the power supply in the state. Besides power distribution, WBSEDCL is responsible for hydro generation in the state. 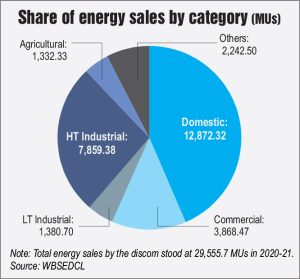 The company’s feeders have achieved 100 per cent of its metering coverage, wh­i­le it has achieved 20.9 per cent of me­t­e­ring at its distribution transformers.

On the generation side, WBSEDCL currently owns and operates the 900 MW (4×225 MW) Purulia pumped sto­rage hy­dro project, which has be­en operational since 2007-08. During 2020-21, the project generated 1,306.44 MUs of electricity against the Central Ele­c­tricity Autho­rity’s target of 1,200 MUs. The project has achieved an average plant availability fa­ctor of 96.59 per cent and an average cy­cle efficiency of 77.46 per cent against a design cycle efficiency of 75.5 per cent during 2020-21.

The discom has planned a capex of Rs 131 billion for 2022-23 to 2024-25. This will be mostly spent on upgradation and modernisation of the distribution infrastructure with information and operation technology integration.

In January 2022, the World Bank extended a $135 million loan to WBSEDCL to im­prove efficiency and reliability of el­ec­tricity supply in West Bengal. The pro­ject aims to strengthen distribution networks, invest in smart-grid technologies and en­sure financial sustainability of WBSEDCL. The project will be fi­nanced by the West Bengal government and loa­ns from the Asian Infrastructure Invest­ment Bank and the World Bank. The $135 million loan from the Inter­national Bank for Reconstruc­tion and Develop­ment is a variable spread loan that has a maturity of 17 years, in­cluding a grace period of seven years. As part of the project, HVDS and AB Cabling would be undertaken in around 13 highest loss-making districts (where eight districts have AT&C losses higher than 25 per cent) besides construction of GIS substations, technology and capacity up­gr­a­­­des in WBSEDCL’s communication infrastructure and im­plementation of distribution automation technologies, among other things.

WBSEDCL will also be implementing the Revamped Distribution Sector Sc­he­me, which was launched in July 2021 by the MoP to help discoms im­p­ro­ve the­ir op­erational efficiencies and financial sustainability.

On the renewables front, the company plans to develop a 200 MW solar park project at Goaltore, Paschim Medinipur with financial assistance worth Rs 6 billion from KfW Germany. The first phase (125 MW) of the project is expected to be commissioned by June 2024.

Going forward, WBSEDCL has ambitious capex, capacity addition and technology upgradation plans in place that will assist in achieving its aim of becoming more commercially viable and self-sustaining in future, in addition to providing reliable power to consumers.