In a first-of-its-kind move to tackle the problem of mounting discom du­es, the Ministry of Power (MoP) has allo­wed discoms to clear their outstanding dues along with late payment surcharge (LPS) in equated monthly in­s­talments (EMIs). On June 3, 2022, the MoP issued the Electricity (LPS and Re­la­ted Matters) Rules, 2022 wherein the payment of outstanding dues, including principal and LPS accrued up to the date of notification of the rules, will be re­scheduled and the due dates redetermined for payment in EMIs of 12-48 months, without further imposition of LPS. However, a delay in the payment of any instalment would attract LPS on the entire outstanding dues.

Delays in payment against power purchase by discoms are the biggest reason for liquidity stress in the power sector. As of May 18, 2022, discom overdues (ex­­­cluding disputed amount and LPS) stood at Rs 1,000 billion and LPS dues stood at Rs 68.4 billion. According to the power ministry’s initial estimates, (wh­en the power ministry had announced in May 2022 that a one-time relaxation wherein the amount outstanding inclu­des principal and LPS on the date of no­tification of the scheme will be fro­zen without further imposition of LPS un­der the scheme), the scheme will save an amount of Rs 198.3 billion on LPS in the next 12 to 48 months. States like Ta­mil Nadu and Mahara­shtra with large outstanding du­es will save over Rs 45 billion each, Uttar Prade­sh will save arou­nd Rs 25 billion while An­dh­ra Pradesh, Jammu & Kash­mir, Ra­jasthan and Telangana will save in the range of Rs 11 billion-Rs 17 billion each.

To recall, this is not the first liquidation scheme or bailout package for the power distribution segment. The earlier 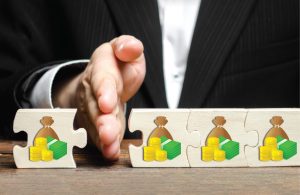 one was the liquidity infusion scheme implemented under the Aatmanirbhar Bharat Abhiyan, wherein the central government had extended loans worth Rs 1.35 trillion to clear discom dues. However, its impact was short-lived and outstanding discom dues swelled soon after, owing to liquidity challenges. That said, the latest intervention is different from earlier ones and is expected to ensure better payment discipline in the long term. Sachin Gupta, Executive Director and Chief Rating Offi­cer, CareEdge explains. “Unlike the previous schemes where financing was arran­ged or liabilities were taken over by the state governments, the recent EMI notification is mo­re of a measure to ensure payment discipline among the discoms. The sche­me takes cognisance of the discoms’ inability to make lump-sum payments to clear overdues because of their weak financial position and aims at re­scheduling their liabilities towards select creditors. Akin to the August 2019 rule, which made the issuance of a letter of cre­dit mandatory by discoms against power purchase from gencos, these rules will bring in the much-needed payment discipline in the power distribution sector,” says Gupta.

Details of the Electricity (LPS and Related Matters) Rules, 2022

Order of payment and adjustment and rate of LPS: The LPS will be payable on the payment outstanding after the due date at the base rate for the first month of default. The rate of LPS for the successive months of default will increase by 0.5 per cent for every month of delay. However, the LPS will not be more than 3 per cent higher than the base rate and will not exceed the rate specified in the agreement.

The payments by discoms to gencos/ transcos/trading licensees will first be adjusted towards LPS and, thereafter, towards monthly charges, starting from the longest overdue bill. All the bills payable by a discom will be time-tagged and the payments will be adjusted first against the oldest bill, then the second oldest bill, and so on and so forth. 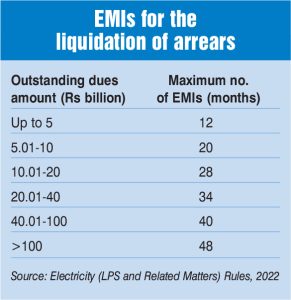 Liquidation of arrears: The total outstanding dues including LPS up to the date of notification of the rules will be rescheduled and the due dates will be redetermined for payment by a distribution licensee in EMIs of 12-48 months. The maximum number of EMIs have been offered to discoms with over Rs 100 billion of outstanding dues. At the same time, discoms with dues of up to Rs 5 billion, can pay their arrears in 12 monthly instalments.

Notably, if the distribution licensee ag­rees to pay the arrears due as per the instalment fixed under the rule and ma­kes timely payments towards the instalments, then LPS will not be pay­able on the outstanding dues from the day of the notification of these rules. However, in case of any delay in the payment of an instalment, the LPS will be payable on the entire outstanding dues as on the date of notification of the rules.

Expected outcome and the way forward 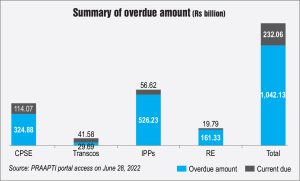 The EMI scheme for the payment of outstanding dues by the discoms is expected to improve the cash visibility for the pow­er sector and inculcate payment discipline among the power discoms. Furth­er, the scheme will provide respite to disco­ms from the continuous accumulation of LPS. Notably, the timing of the scheme is crucial for the pow­er sector as the country is currently witnessing increasing power demand and inadequate coal availability. The delay­ed payment by the discoms adds to the woes of the gencos and adver­sely affects their ability to maintain coal stocks at power plants. It also affects their cash flow, making it difficult to maintain adequate working capital for day-to-day operations, ultimately pushing them into insolvency.

Manish Gupta, senior director, CRISIL Ratings, notes, “With savings of around 25 per cent (Rs 65 billion-Rs 75 billion), the net payout of discoms to gencos is likely to be Rs 200 billion, over and abo­ve their yearly cost of power purchase. Funding this additional payout through internal accruals could be a challenge as discoms continue to incur operating lo­sses. But an immediate, one-time add­itional recovery through tariff or government assistance to at least cover the inc­remental payouts co­uld help discoms clear their dues this fis­cal.” Fur­ther­more, as per CRISIL Rati­ngs analysis, the sche­me to liquidate ov-er­dues can relea­se past receivables of the re­ne­wable energy sector of Rs 90 billion over the next two fiscals. This could im­prove the receivables period of leading renewable energy gencos by 40-50 days from the current 180 days, and improve the equity returns of some projects by up to 1 percentage point.

Net, net, the objective of the EMI sche­me is to ensure the well-being of the power sector. However, the timely payment of instalments by the discoms remains linked to the improvement in their financial position. This requires long-overdue structural changes in the segment pertai­ning to operational efficiency, and timely tariff revisions, electricity bill payments by government bodies and subsidy payout. Further­mo­re, the impleme­ntation of projects un­der the Revamp­ed Distribu­tion Sector Sche­me, which fo­cuses on network strengthening and ex­pansion, AT&C loss reduction and sm­art metering, re­mains key to improving discom efficiencies, going forward.