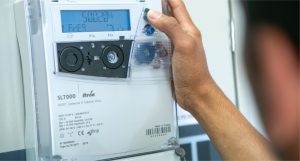 Combining metering components with bidirectional communication architecture enables the measurement of consumption, thus communicating the level of consumption in real time and allowing connection/disconne­ction via controlled load switches as per the utility’s decision. Additionally, smart meters facilitate the implementation of va­riable pricing systems in addition to capturing detailed information about consumption and captive generation (if any). As a result of these features, discom utilities are expected to rapidly roll out smart meters in the coming years, given that it helps them reduce their AT&C losses as well as implement time-of-day (ToD) pricing.

Hence, the Central Electricity Authority (CEA) has issued smart meter testing gui­de­lines to all utilities, making it mandatory to test smart meters as per relevant stan­dards to ensure their stability, reliability and interoperability, as well as ac­curate billing. Furthermore, in 2015, the Bureau of Indian Standards (BIS) in­tro­duced smart meter testing standards.

As per the CEA, the technical specifications of single-phase whole current smart meters and three-phase whole cu­rr­ent smart meters should include: measurement of electrical energy parameters, integrated load limiting switch/re­lay, bidirectional communication, recor­ding and reporting, tamper event detection, power event alarms as per IS 16444 Part 1, prepaid features at the MDM end (as per IS 15959 Part 2), remote firmware up­gra­de, ToD features, net metering features (optional, as per the utility’s requ­ire­me­nt), and on-demand reading. The me­ter shall be BIS marked as per IS 16444 Part 1 and the construction requirements shall be as per IS 16444 or IS 13779.

On the communications side, the meter shall be able to communicate with the head-end system (HES) using any one of the communication technologies included in IS 16444 Part 1 (RF/PLC/cellular), in a secure manner. The meter shall have the ability to record energy under tamper conditions as defined in IS 15959 Part 2, and will log the event and send an alarm to the HES after detection of the defined theft features. The utility or the consumer can inspect the meter randomly as per a sampling plan for an acceptance test based on IS 16444 Part 1.

A smart meter shall be subject to tests such as metrology tests, load switch ca­pa­bility tests, and data exchange protocol and smart meter communicability tests. Metrology tests comprise acceptance tests and routine tests, in addition to exa­mination of the construction quality and the precision of metering architecture, values displayed, etc. Tests of insulation properties via impulse voltage tests, AC high voltage tests and insulation resistan­ce tests ensure the safety, consistency and reliability of smart meters. Mean­whi­le, accuracy tests comprise tests on limi­ts of error and interpretation of results, me­ter consistency, starting conditions, error repeatability, etc. Other tests such as tests of heating, mechanical requirements, electromagnetic compatibility and climatic influences are desi­gned to stress-test the safety, strength and robus­tness of smart metering equipment in a variety of conditions.

The Central Power Research Institute also has an accredited smart meter testing facility that has been operational for some years. Moreover, Nany Calib­ra­­tion Laboratory possesses smart me­t­er testing infrastructure. It also conduc­ts periodic tests on site to ensure the co­mpliance and durability of smart meters over their lifetimes.

In October 2021, the National Accredi­tation Board for Testing and Calibration granted approval to Tata Power’s Mum­bai-based testing facility. This vertically integrated entity will help Tata Power provide secure and standard smart meter testing as well as expedite smart meter deployment in areas operated by its discom.

As of now, more than 3.7 million smart meters have been installed throughout In­dia, with plans to install another 100 mi­llion by December 2023. There are plans to install approximately 250 million meters for India by 2025. Therefore, it is vital to ensure that the smart meters are tested rigorously in conformance with the highest standards. These installations are also driven by the central government’s Revamped Distribution Sector Scheme with an outlay of Rs 3.3 trillion.

There are a variety of challenges in the testing and deployment of smart meters at the technical level. Most of these pr­ob­lems occur at the intersection of me­ters and communication systems owing to some gap in testing. Examples inclu­de lack of communication components in certain installed smart meters, excessive time taken in integrating Advanced Metering Infrastructure with the legacy billing software of state-owned discoms, etc. Other problems pertain to the absence of fundamental standards, lea­ding to interoperability issues. The lack of interoperability leads to problems in interfacing between HES and different meters made by different me­ter manufacturers. This, in turn, stalls automatic acquisition of meter data and delays operationalisation of prepaid functionality in these meters. Post-Co­vid-19, the programme is also facing a problem related to shortage of chips on account of supply chain disruptions globally. Thus, many utilities are reconsidering their plans to deploy smart meters given these issues, coupled with the inadequacy of testing facilities. He­n­ce, it is essential for the government and private players to launch smart me­ter testing facilities throughout India to expedite their testing and enable their deployment with minimal delays.