To meet India’s goal of decarbonisation and achieve 500 GW of non-fossil fuel-based capacity by 2030, in a recent letter, the Ministry of Power (MoP) issued a year-wise trajectory for replacing nearly 58 BUs of thermal power generation in the country with renewable energy by 2025-26. The ministry has directed 81 thermal power plants (TPPs) in the ce­n­tral, state and private sectors to reduce their thermal power generation and offset the decline with solar power.

The move is aimed at reducing coal usage for power generation by 34.7 million tonnes per annum (mtpa), and reducing carbon emissions by over 60 mtpa, thus alleviating the concerns of the coal crisis in the country, according to the ministry. Recent months have seen significant policy measures for ramping up the renewable energy output and replacing expensive thermal power. To recall, in Novem­ber 2021, India allowed its thermal generation companies to supply renewable power to consumers under existing power purchase agreements (PPAs) and set up renewable energy generation ca­pa­city by themselves or through developers via open bids. More recently, in April 2022, the MoP issued the revised scheme for flexibility in generation and scheduling of thermal/hydro power stations through bundling with renewable energy and storage power. “The guidelines for bundling and providing flexibility have already set the stage for replacement of thermal power with renewable energy power in the country,” stated the MoP in the latest directive. 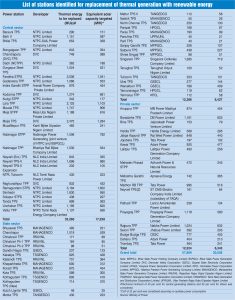 Rationale for replacement of thermal power

An exercise carried out by the MoP ass­essed the amount of thermal energy from TPPs that can be replaced, and identified plants that can operate at a minimum feasible capacity. Existing CERC regulations define a technical mi­nimum of 55 per cent up to which TPPs in the country can be operated, and it is expected that a reduction in generation from TPPs may be feasible up to a technical minimum of 40 per cent in two to three years.

TPPs with high tariffs have been identified for replacement. As per the indicative list prepared, about 58,000 MUs of thermal generation from 81 central, state and private sector TPPs can be substituted with renewable energy generation. For these plants, the ministry has also set pla­nt-wise targets for adding renewable ca­pacity. It is estimated that a total of about 30,000 MW, at 22 per cent capacity utilisation factor (CUF), would be re­quired to replace thermal generation.

A target of about 58,000 MUs by the end of 2025-26 has been fixed at the national level. For this, all central public sector un­dertakings, and state and private generation utilities have been asked by the MoP to take appropriate action to meet 20 per cent of the total target in 2023-24, 35 per cent in 2024-25 and 45 per cent in 2025-26. Even though station-specific targets have been established, the notification states that a thermal power station can substitute larger amounts of thermal power for renewable power than the target. The targets set for generating stations are the bare minimum that can be achi­eved, however, higher capacities can be in­stalled or procured by them. Addi­tionally, any TPP that is not mentioned in the list will also be eligible to blend/re­place its thermal power with renewable power. Further, renewable energy can be bundled at hydropower generating stations. Importantly, generating stations that have installed or procured a higher capacity of power for re­placement but are not getting scheduled have been dire­cted to sell this power at the exchanges.

The move is a step in the right direction, note analysts, as replacement of thermal energy will lead to a significant reduction in the demand for coal, which will help alleviate the ongoing coal crisis in the co­untry. Besides, it will reduce carbon emissions, thus providing cleaner power to co­nsumers and greening the environment. Moreover, the increased uptake of renewable energy will help in furthering the national goal of achieving 500 GW of non-fossil fuel-based capacity by 2030. Discoms will also be able to count the renewable energy supplied towards their renewable purchase obligation, without the financial burden of separate PPAs. Overall, this step by the central government is expected to lead to a faster energy transition.