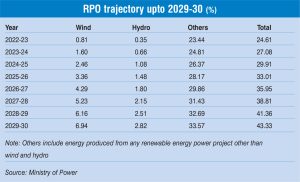 Hydropower imported from abroad will not be counted toward HPO compliance. Any deficit in meeting other RPO each year can be made up for the extra energy utilised by wind power plants completed after March 31, 2022.

The energy storage obligation will be calculated in energy terms as a proportion of total electricity consumption and will be regarded as satisfied only when at least 85 per cent of the total energy stored in the energy storage system is obtained from renewable energy sources each year. For energy storage, which has been introduced for the first time, the targets will increase from 1 per cent during 2023-24 to 4 per cent by 2029-30. This would be met through solar and wind power projects with energy storage.