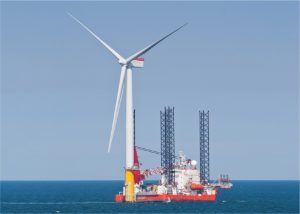 The central government’s announcement of a 37 GW bidding trajectory for offshore wind power up to 2029-30 could be a potential game changer for the segment. In line with this, the Mini­stry of New and Renewable Energy (MNRE) is expected to release an offshore wind tender in the next three to four months to lease 4 GW of wind energy blocks off the coast of Tamil Nadu. In a separate development, the ministry has released a strategy paper outlining va­­rious development models for utility and open access offshore wind power projects along with viability gap funding (VGF) and other financial incentives.

Offshore wind is a clean, affordable and scalable resource. These projects have hi­gher plant load factors (PLFs) and are mo­re efficient compared to onshore pro­­jects. These factors make offshore wi­nd an important resource for the country’s energy security. In view of its compleme­ntary nature with solar power, offshore wind is useful in providing round-the-clock clean power, and managing peak de­mand in the country.

Recent developments to create a competitive offshore wind market will he­lp elevate the wind industry’s sentiment, and accelerate India’s journey to­wards its green energy goals. “Offshore gi­ves gr­eat opportunity with higher PLF and the government is moving in the ri­ght direction. The technology and size of the turbine do not pose a problem on the ma­­nufacturing side,” says D.V. Giri, se­c­retary general, Indian Wind Turbine Manufacturers Association.

The project capacity of 8 GW bid out in the first two years starting 2022-23 will be entitled to the benefits of green attributes like carbon credits. Bidding for the first 12 GW will be conducted on a single-stage two-envelope model, wherein bidders will be evaluated based on their techno-commercial capabilities and only the technically qualified bidders will proceed to financial evaluation. Financial evaluation will be based on the quoted lease fee per square km of seabed area. The bidder offering the highest le­ase fee per square km of seabed area will be declared the winner for all­ocation of the project.

The evacuation and transmission of pow­er from the offshore pooling substation to onshore transmission will be provided free of cost for all offshore wind capacities that will be bid out up to 2029-30. The MNRE, through its implementing agency, will issue the first bid in the next three to four months for leasing out offshore wind energy blocks equivalent to 4 GW capa­city off the coast of Tamil Nadu.

The MNRE has released a strategy pa­per outlining development models for the es­ta­blishment of offshore wind energy projects.

Model 1: Under the first model, which will be followed for demarcated offshore wind zones where the MNRE/­National Institute of Wind Energy (NIWE) has carried out detailed studies, the MNRE (or its designated agency) will enter into a le­ase agreement for a 30-year period wi­th the successful bidders. The offshore wind power developer will be required to pay the annual floor lease fee of Rs 100,000 per square km per year. Cu­rr­en­tly, one zone off the coast of Gujarat will be considered under the model.

Model 2 (A): Under the second model applicable to offshore wind sites identified by the NIWE for which detailed surveys have not yet been carried out, the developer may select a wind site within the identified zone and carry out the requir­ed surveys. The MNRE, through its imp­le­menting agencies, will issue bids for the procurement of 2 GW of offshore wi­nd power capacity tentatively in fin­an­ci­al year 2024-25. Necessary central fin­ancial assistance in the form of VGF for initial projects will be provided to achieve a predetermined tariff for these projects.

Model 2 (B): Developers that have carried out studies and surveys may also develop offshore wind projects for sale of power on a merchant basis or under bila­teral agreements through the open acc­e­ss route or for captive consu­m­ption. The benefits of this model are provision of the power evacuation infrastructure fr­om the offshore pooling deli­very point, waiver of transmission char­g­es, renew­ab­le energy credits with mul­ti­pliers, carbon credit benefits, etc. as de­termined by the Government of India or the state go­vernment from time to time.

Model 3: NIWE will identify from time to time large offshore wind zones with­in the exclusive economic zone, but not covered under the other two models. The pro­posed offshore wind sites within the­se zones would be allocated for a fixed pe­riod on a lease basis through single-stage two-envelope bidding. Project de­velopment will be carried out by the prospective developer and the power generated from the projects will be either used for captive consumption under the open access mechanism or so­ld to any entity through a bilateral po­w­er purchase agreement or through the power exch­anges. Benefits like provision of the po­wer evacuation infrastructure from the offshore pooling delivery point, waiver of transmission charges, renewable energy credits with multipliers and carbon credits as determined by the ce­n­tral government or state government fr­om time to time will be applicable. The evacuation of power from the offshore pooling delivery point to the onshore meeting/interconnection point will be the responsibility of Powergrid for all the above models. Me­anwhile, the developer will set up the offshore wind project, including the offshore pooling station, at the 220 kV voltage level. Mete­ring for the purpose of en­ergy accounting will be done at the res­pective on­sh­ore pooling stations.

Despite the enormous potential, offshore wind energy development in India is lagging. The offshore wind power policy was release in 2015, besides there is a target for setting up 30 GW of offshore capacity capacity by 2030. How ever, no project ta­ken off in the segment yet. This is attributable to significantly higher costs for off shore wind projects compared to other re­­ne­wable energy sources. The tariffs for off­shore wi­nd energy are significantly hi­gher than those for onshore projects and other re­ne­wable energy source. Industry estima­tes suggest that the tariff for offshore wi­nd energy projects is expected to be Rs 12-Rs 14 per unit, making it difficult for any entity to buy power unless there is VGF either on the project or on the tariff. Meanwhile, the component costs are hi­gher for offshore projects. As per the Lok Sabha’s 17th Standing Committee on Energy, the per megawatt cost of an offshore wind turbine is two to three times the cost of an onshore wind turbine. The project development of offshore is very different from onshore. Offshore wind pro­jects require a very different in­fra­str­ucture at the port level along with material holding equipment, bar­ges and other support ancillary services for project development inclusive of under-water cables. Building manufacturing capabilities near the ports would be crucial as component sizes for offshore are much larger and may be more costly to transport across longer distances. Other challenges are lack of financing, subsea ca­b­ling, grid interconnection and operation, and development of the transmission infrastructure. There is also uncertainty regarding data as offshore wind data and studies in India are largely in­ac­cessible or insufficient at present.

One of the key positives in the offshore wi­nd energy development is the maturing of off-shore wind energy technology and the subsequent softening of the eq­uipment prices. Globally, offshore wi­nd co­­sts have come down by one-third of wh­­at it used to be a decade ago. This is due to the maturity of the local industries and with localisation of components and supply chain. Overall, in light of recent de­velopments, the industry is upbeat ab­out offshore wind energy development in the country after a lag of several years. Th­­is is expected to be an important reso­urce in the country’s energy mix and contribute towards the country’s decarbonisation initiatives, green energy goals and energy security going forward. That said, the legacy iss­ues and challenges such as lack of ade­qu­ate funds, inadequate supporting in­fra­structure and transmission constrai­nts need to be tackled for the segment to take off. 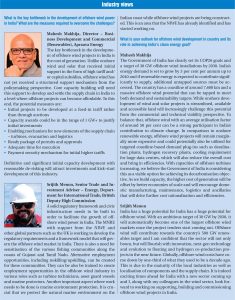