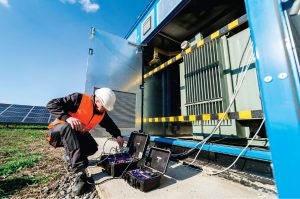 The installed capacity of variable renewable energy (VRE) such as solar and wind power in India is es­timated to rise to 500 GW by 2030. Co­rrespondingly, the exponential capacity growth will necessitate the development of transmission and distribution (T&D) infrastructure such as reactors, transformers, substations, etc., to a similar degree. Transformers are critical components in solar energy production and distribution. Historically, transformers have “stepped-up” or “stepped-down” en­­ergy from non-renewable sources. How­ever, in the case of solar and wind energy, they will also need to have specialised inverters to convert DC voltages to AC, switching transients, improved har­­monics systems, etc.

For instance, large load swings in a relatively short periods of time are inevi­table with solar and wind turbine transformers. At night, there is virtually no lo­ad. As the sun rises, early in the day, so­lar cells begin to conduct and the wind begins to blow. This results in very large load swings as well as pressure ch­anges within the tanks of liquid-filled transformers. Hence, renewable energy such as solar- and wind-based power re­quires specialised transformers.

Conventional transformers intrinsically face difficulties at handling and transmitting substantial volumes of electricity, given that VRE installations are vol­a­tile and generate electricity intermitte­ntly with huge and rapid peaks and tro­u­ghs in electricity generation. Additi­o­nally, in the upcoming years, the rise in installation of rooftop will create more prosumers willing to sell electricity to the grid during the day and withdraw electricity during off-peak hours. Upgra­ding to smart transformers will ensure bidirectional flow of energy from the grid to buildings as well as from consumers to the grid. Essen­tially, it will ensure that the electricity is extended to consumers who need it during peak ho­urs at competitive prices, while simultaneously dispensing with the need to store electricity, which is a costly proposition.

Smart transformers will also facilitate energy grids to become more resilient to volatility and grid instability of various kinds. The internet of things (IoT) technology will also help in gathering data on the grid’s performance and report any po­ssible issues to power companies in real time. These insights will allow energy suppliers to fix any inefficiencies in the network, identify the core issue and im­mediately resolve them. They could then address these problems as fast as possib­le, avoiding outages and downtime.

IoT, in combination with artificial intelligence/machine learning, will also be able to give utilities advanced warning about any potential issues by modelling the performance and intensity of the usage of components. This, in turn, will help utilities in diagnosing and scheduling repair of possible problems in ad­vance and reduce their operations and maintenance (O&M) costs. There­fore, smart transformers will increase the efficiency and reduce O&M costs of T&D utilities.

Electric power from solar energy is generated by converting solar energy to DC by using photovoltaic (PV) cells. The DC po­wer generated by PV cells is converted to AC by inverters and the AC power is connected to the power grid by a step-up tra­nsformer. Additionally, they synchronise the output AC power with the phase frequency and voltage of the available grid in order to feed PV power into the grid. PV inverters are very efficient, generally 96-98 per cent, and inject very minimal DC current, harmonics or reactive po­wer into the grid, which are usually wi­thin the all­o­wable range of the grid code.

Solar power systems also have special design issues because the largest solar in­verter size is about 500 kVA, which is half of the general so­lar power output. The­refore, designers are building 1,000 kVA solar transformers by placing two inverter connected windings in one box. The tra­nsformer must have separate windi­ngs to accept completely separate inputs. Design issues also stem from running cables for long distances to convert DC to AC. Restrictions on inverter size also limit the size of PV systems. Increasing the size by adding more solar inverters into one transformer box is extremely difficult. With the required box size and need to run cabling to convert DC to AC, things get complex.

The Central Electricity Authority (CEA) issued guidelines and standards for solar transformers in May 2021, in order to standardise transformers in solar park pooling stations. Generally, electrical energy generated from the solar block is pooled at the 33 kV level and stepped up to 132 kV/220 kV/400 kV at the pooling station of solar power park developers and then connected to the inter­state/ intra-state transmission system. As of now, there are different practices among solar park developers across the country regarding ratings, number of low voltage windings, losses, percentage of impedance, provision of on-load tap-changers and tertiary winding, etc., of power transformers. This notification ai­ms to standardise these transformers. Stand­ardisation of transformer equip­me­nt will also enable physical interch­ange­abi­lity of transformers of different mak­es. In case of failure of any transfor­mer, the outage time to replace a fail­ed unit with a spare unit/new unit of different make would be minimised as it can be accommodated in the same space without/with minor modification to the existing structure.

In the coming years, rising renewable capacity will necessitate simultaneous in­vestments in the T&D sector, so as to upgrade it and incorporate smart technologies in order to facilitate volatile, intermittent and bidirectional flow of electricity.

“Taking the next step in digitalisation”: Interview with ABB’s Massimo Danieli

Utilities globally are realising that digitalisation is the way forward to cope with the rapid changes and challenges in the industry, given the growing number of consumers, prosumers and renewable energy integration. In a recent […]

Over the years, transformer technology has evolved considerably to meet the emerging requirements of utilities and enhance power system reliability. The conventional oil-filled transformers are being replaced with dry-type transformers and advanced smart transformers. The […]