In 2021, the Biden Administration set ambitious climate goals of achieving 100 per cent clean electricity by 2035 and net zero emissions by 2050. This has put the spotlight on the urgent need for rebuilding and modernising the country’s ageing electricity transmission grid, which is considered critical for integrating large-scale clean energy as well as withstanding climate change impacts. To support these goals, huge dedicated federal funding allocations have been made for grid modernisation under the Bipar­tisan Infrastructure Law (BIL), enacted as the Infrastructure Investment and Jobs Act (IIJA) in November 2021.

The IIJA-proposed funding includes new federal investment totalling $65 billion dedicated to power and grids. Par­ti­cul­ar­ly, it has authorisation of over $28.8 billi­on to upgrade the power infrastructure, in­­cluding by building thousands of miles of new, resilient transmission lines to fa­ci­litate the expansion of renewable energy.

The US Department of Energy (DOE) has launched several programmes to implement the key provisions of the law in the electricity sector. At the start of 2022, the DOE launched the “Building a Be­tter Grid” initiative to catalyse the na­ti­o­n­wide development of new and up­gra­ded, high capacity transmission lines with plans to deploy over $20 billion in federal financing tools.

Over the past few months, the DOE has released several notices of intent (NOIs) and requests for information (RFIs) prior to opening applications for funding un­der the various BIL programmes. For the transmission sector, in particular, the DOE released an RFI for the $2.3 billion formula grant funding programme for states and tribal nations for grid modernisation in April 2022 and an RFI for the $2.5 billion Transmission Facili­ta­­tion Pro­gram (TFP) in May 2022. On July 6, 2022, the DOE opened applications for the former programme.

In the clean energy sphere, the DOE released the RFI for the $505 million Long Dura­tion Energy Storage for Everyone, Every­where (LD ESEE) programme to co­mm­er­­cialise new technologies that inc­rease grid reliability and enable large-sca­le cle­an energy integration. Further, it laun­ch­ed the Interconnection Innovation e-Xch­ange (i2X), a new BIL-funded partnership, that brings together grid operators, utilities, state and tribal governme­nts, clean energy developers, energy justice organisations, and other stakeholders to connect more clean energy to the US power grid by solving some of the challenges facing the power industry.

Under innovative resilience grants, $1,000 million will be available annually for fiscal years 2022 through 2026. States, tribes, local governments and public utility commissions will be eligible to receive grants under this programme. Federal financial assistance will be available to de­monstrate innovative approaches to tra­nsmission, storage and distribution infrastructure to stren­gthen and enhance resilience and reliability; and to demonstrate new appr­o­a­ches to enhance regi­onal grid resilience, implemented throu­gh states by public and rural electric coo­pe­rative entities on a cost-shared basis. Applications for this programme will open in the third quarter of 2022.

The grid resilience grants program­me has two provisions – the state, territory and tribes formula grant funding programme and a competitive solicitation for utilities and industry. While the NOI and RFI have already been released for the former programme (worth $2.3 billion), they are expected to be announced shortly for the latter programme.

The overall formula grant funding am­o­unt is spread over five years for fiscal ye­ars 2022 through 2026, or about $459 mi­llion annually. The states, territories and tribes have to provide 15 per cent cost share, and up to 5 per cent of the funds can be used for technical assistance. In line with the legislation, the DOE will consider five criteria for developing the formula for the programme – population, area, probability of a disruptive ev­e­nt, severity of disruptive events, and ex­penditure of mitigation efforts.

The states, territories and tribes may further subgrant to eligible entities such as electrical grid operators, energy storage operators, electricity generators, tra­nsmission owners and operators, distribution providers and fuel suppliers. An eligible entity that receives a subgra­nt must match 100 per cent of the am­o­unt of the subgrant. There are some exceptions. If the subgrant entity sells 4 TWh of electricity or less per year, the requir­ed match will be one-third of the amou­nt awarded to the subgrantee.

The launch of this new programme, with an authorisation of $2.5 billion, is one of the first down payments on over $20 billion of investments under the DOE’s Building a Better Grid Initiative. Essen­tially, the TFP is an innovative, revolving fund programme that will provide federal support to eligible projects for overcoming financial hurdles. This includes either constr­u­ction of a new or a replacement transmission line of at least 1,000 MW; upgrade of an existing transmission line or construction of a new transmission line in an existing transmission, transpo­r­­tation or telecommunication infras­tr­uc­ture corridor of at least 500 MW; or the connection of an isolated microgrid to an existing infrastructure corridor lo­cated in Alaska, Hawaii or a US territory.

Under the TFP, three financing tools are available – DOE loans; the DOE participation in public-private partnerships (PPPs); and capacity contracts with eligible projects in which the DOE would serve as an “anchor customer”. The DOE can extend loans at a fixed rate, considering current market conditions. Under PPPs, the DOE can participate with eligible companies in designing, developing, constr­u­cting, operating, maintaining or owning projects that are either within a na­tional interest electric transmission corridor or are necessary to accommodate an increase in electricity demand across more than one state or transmission planning region.

Through capacity contracts, the DOE will commit to purchasing up to 50 per cent of the maximum capacity of the transmission line for up to 40 years. Thus, DOE can help overcome the financial challenges that often face new transmission pro­grammes or upgrades to existing tra­nsmission lines by encouraging and de-risking additional investments. The DOE is planning a phased approach for TFP solicitation starting 2022. 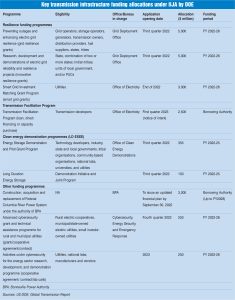 The LD ESEE initiative is a four-year programme (2022-25) to validate new grid-scale long-duration energy storage technologies and enhance the capabilities of customers and communities to integrate grid storage more effectively. Admini­stered through the DOE’s new Office of Clean Energy Demonstrations, the initiative includes four energy storage de­monstration programmes – energy storage demonstration projects (Demo Pro­jects), the Energy Storage Pilot Grant Pro­gram (Pilot Grants), the Long-Duration De­monstration Initiative (Demo Initiati­ve); and the Joint Program. Under the last, the DOE will collaborate with the De­­pa­rt­ment of Defense (DOD) for long-durati­on demonstrations on government facilities. An allocation of $355 million has been made for Demo Projects and Pilot Grants, and the remaining $155 million is dedicated to the Demo Initiative and the Joint Program.

The Demo Initiative will prepare a cohort of promising technologies for eventual utility-scale demonstration. The field demonstrations, in particular, are intended at a scale of 100 kW or less and have already been proven at lab scale. Demo Projects aims to help commercialise new energy storage technologies that can power the grid for at least 10 hours and drive down the levellised cost of storage (LCOS) to $0.05 per kWh by 2030. The DOE is required to fund three energy sto­rage demonstration projects by Sep­tem­ber 30, 2023. The Pilot Grants programme will help overcome the institutional barriers to technology adoption in the marketplace. The initiative aims to lower grid energy storage barriers and support both small-scale behind-the-meter pilots and major utility-scale demonstrations. Some of the eligible uses for Demo Pro­jects are improving the security of critical infrastructure and emergency res­ponse systems; improving the reliability of transmission and distribution (T&D) systems; optimising T&D system operation and power quality to defer or avoid the cost of replacing or upgrading electric grid infrastructure; providing ancillary services for grid stability and management; integrating re­ne­wable energy resource capacity; imp­ro­ving energy efficiency; and integrating fast charging of electric vehicles.

Long-duration storage facilitates higher levels of renewable energy penetration without having to overbuild on the generation and transmission sides. Besides lithium-ion batteries, which currently do­­­minate the energy storage market, other long-duration candidates include sodium-ion batteries, vanadium flow batteries and fuel cells powered by rene­wable gas and green hydrogen.

In a related development, the DOE’s Solar En­ergy Technologies Office and Wind En­ergy Technologies Office la­un­ched the i2X partnership to help reduce wait times for clean energy sources in interconnection queues and lower costs to connect to the grid. i2X is supported by the Pacific Northwest National Labo­ratory, the National Renewable Energy Laboratory, and the Lawrence Berkeley National La­boratory.

The US has embarked on an extensive journey to renew its transmission system and deploy new technologies to meet the co­untry’s energy transition goals. Size­able federal funding has been dedicated for this purpose under BIL. The DOE is making concerted efforts to put in place the frameworks for disbursing the funds to deserving candidates. However, to rea­li­se this grand vision, effective and timely implementation is the key. n

Wind power is one of the fastest growing sources of power generation in the US and is providing substantial economic and health benefits along with energy security. According to the Energy Information Administration, wind generation […]