Coal-based power is a key contributor to the country’s generation capacity, accounting for a major share of 52 per cent in the total installed base of 404 GW (as of July 2022). However, the pace of coal-based capacity addition has declined considerably and the share of coal in the generation mix has reduced in the past few years amid growing policy focus on renewables and increase in stressed assets in the thermal power segment. The trend is likely to continue as India steps up its decarbonisation efforts to meet the net zero commitments announced at COP26 and achieve 500 GW of non-fossil fuel-based capacity by 2030.

The thermal generation capacity has increased from 189 GW in March 2015 to 236 GW in March 2022, recording a CAGR of 3.2 per cent. Coal accounts for over 89 per cent (or 210.7 GW) of thermal generation capacity while the rest is contributed by gas at 24.9 GW (10.5 per cent) and diesel (0.5 per cent or 510 MW). Thermal capacity addition has slowed down significantly in the past five years with generators as well as lenders moving away from coal-based projects owing to environmental concerns and gas-based projects are stalled due to the lack of domestic gas. Only about 4.5 GW was added by TPPs vis-à-vis 8.7 GW in 2017-18.

The electricity generation fuel mix has also changed over the years. Coal accounted for 76 per cent of total generation in 2014-15, but its share fell to 72 per cent in 2021-22. Meanwhile, the share of renewables has increased from 6 per cent to 11.5 per cent.

Trends in tariff and generation cost

In recent years, there has been an upward pressure on tariffs and the cost of generation (CoG) from coal-based power plants, mainly due to the impact of revised environmental norms, increase in imported coal prices, and escalation in the capital costs of projects.

Imported coal prices have increased by more than 100 per cent over the past year, reaching multi-decadal high mainly led by improved demand from China and geopolitical challenges in Europe. For instance, the Indonesian coal price index has more than doubled from $88 per mt in February 2021 to $188 per mt in February 2022. This can be attributed to higher demand for coal from China and Europe, shift to coal in Europe amid disruption in natural gas supply (due to the Russia-Ukraine war), and a ban on coal exports from Indonesia in January 2022, which led to a supply crunch.

As a result, independent power producers (IIPs) using imported coal witnessed an increase in CoG. IPPs with higher exposure to the short-term market and those without fuel cost pass-through clauses in their power purchase agreements were impacted to a greater extent. The variable CoG is estimated to have increased by 45 per cent from Rs 3.10 per unit in March to Rs 4.50 per unit in February 2022. Due to higher international coal prices, the total coal imported by Indian utilities declined by 41 per cent from 45.8 mt in 2020-21 to about 27 mt in 2021-22.

High international coal prices, post-pandemic recovery in electricity demand coupled with heatwaves in several parts of the country, and logistical constraints on coal transportation led to an increased demand for domestic coal and reduced supply in the summer months. In order to prevent the power crisis from escalating further, the central government announced a number of policy and regulatory measures in April 2022. These include the MoP’s directives to gencos to blend up to 15 per cent imported coal, and to imported coal-based power plants to produce at full capacity. Further, it has invoked Section 11 of the Electricity Act and advised the states to allow the price of coal to be pass-through.

Further, coal-based power projects have witnessed a significant increase in capital costs due to the rise in the cost of equipment and delays in execution leading to pressure on capacity charges. In addition, compliance towards the revised emission norms entails significant capex and opex, which is further driving the CoG upwards. 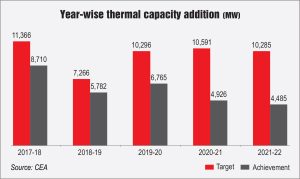 The slow-paced resolution of stressed thermal assets is a key challenge in the sector. Currently, coal-based capacity of about 41 GW is stressed owing to issues such as lack of long-term PPAs, unviable tariffs in PPAs, lack of coal linkages, delays in project implementation and promoters’ inability to secure funding for completing the projects. As of January 2022, about 15.3 GW of coal-based capacity had achieved resolution. The haircut taken by lenders under the resolution process has been quite steep, in the range of 40-65 per cent of the outstanding debt.

The structural issues constraining the performance of these assets include lack of progress in the signing of new long-term and medium-term PPAs, subdued tariffs in the short-term market and payment delays from discoms. As a result, some of the resolved assets run the risk of turning stressed again. This risk is especially high for about 2.4 GW of capacity because of lack of PPAs and absence of strong sponsors. In addition, about 12 GW of gas-based capacity in the private sector is stranded or under-utilised due to the unavailability of domestic gas.

The sluggish progress on the implementation of flue gas desulphurisation (FGD) systems by thermal gencos/IPPs is another challenge. As of August 2022, FGDs have been implemented only in 20 units aggregating 8,290 MW. Depending upon the TPP’s location, FGDs have to be implemented for over 211.6 GW of coal-based capacity spread across 600 units in a phased manner by December 2022, December 2023 and December 2024. So far, bids have been awarded for 85.74 GW of capacity across 190 units. Considering the capital cost of Rs 60-Rs 70 per MW for an FGD system, the total capex for FGD implementation is estimated at about Rs 1.2 trillion.

In addition, discom dues to gencos continue to remain high. As of June 2022, the outstanding amount from discoms to IPPs stood at Rs 1,017 billion, an increase of 4 per cent over Rs 978 billion in June 2021 (as per data from the PRAAPTI portal). In order to address the situation, the MoP has recently allowed discoms to clear their outstanding dues along with late payment surcharge in equated monthly instalments.

The outlook for the thermal power sector is unlikely to change in the coming years. With a greater focus on renewables and decarbonisation, TPPs are expected to play a supportive role in the sector rather than a mainstream one as was the case a few years ago. Further, it will be essential for thermal gencos to undertake flexibilisation measures as frequent ramp-ups and ramp-downs will be needed to balance the grid with the growing influx of renewables. With the expected increase in renewable capacity, it has been targeted that 60 per cent of the installed TPP fleet should operate at 55 per cent minimum technical load (MTL). The MoP has set timelines for achieving the flexibility target (55 per cent MTL) in coal/lignite-based plants by 2024. Accordingly, 20 per cent of the total TPP fleet must comply with the flexibility target by 2020, 30 per cent by 2021, 40 per cent by 2022, 50 per cent by 2023 and 60 per cent by 2024. As of end 2021, about 43 per cent of thermal capacity or nearly 90 GW was compliant with the 55 per cent MTL norm.

The all-India average thermal PLF level is estimated to remain subdued though it may improve to 60-60.5 per cent in 2022-23 due to demand recovery as per ICRA. Regarding capacity addition, thermal capacity addition in 2022-23 is targeted at 6,350 MW while the thermal capacity under construction stands at around 27 GW (excluding projects on hold) as per the Central Electricity Authority. Overall, the country’s generation capacity is expected to reach 820 GW by 2030 with over 500 GW from non-fossil fuel sources.

With inputs from a presentation by Sabyasachi Majumdar, Senior Vice-President, ICRA, at a recent Power Line conference