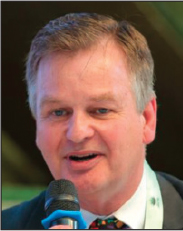 There is a famous African proverb, “If you want to go fast, go alone. If you want to go far, go together.” This proverb is truer now than ever. The world is deeply connected and incredible opportunities come with challenges that can only be solved by nations working together. Partnership is key.

Nowhere is this cooperation more essential than in the Indo-Pacific, the most dynamic regi­on in the world. The region has the fastest growing population and markets in the world and currently accounts for 60 per cent of global en­ergy demand. We must forge coalitions that reach beyond political and ideological boundaries to confront transnational challenges, including the climate crisis and emerging public health threats. Together we can ensure stability amidst rising energy demand and a shifting security and economic landscape.

The Indo-Pacific Strategy, released in February 2022, outlines President Biden’s vision of anchoring the United States in the Indo-Pacific and strengthening the region in the process. It aims to deliver on the U.S. government’s vision of an open, connected, prosperous, secure and resilient Indo-Pacific by 2050 through sustained, creative collaboration with allies, partners and institutions, both within the region and beyond it. The strategy captures U.S. ambitions as well as the ambitions of our allies and partners. It encompasses input from other governments, communities, the private sector, civil society and our developmental partners. Replicating and scaling up excellent development models that have been tried and tested in India is an important component of our strategic approach.

Ushering in an energy-secure South Asia with regional power markets

Electricity demand will grow rapidly in the coming decades and South Asia currently has the least integrated power system in the world, although energy trade has more than doubled since 2012 and now stands at approximately 2,900 MW.

USAID’s work is built upon using cooperation and collaboration to create an integrated, energy secure South Asia that is resilient, peaceful and prosperous. We have been promoting and supporting cross-border electricity trade in South Asia since 2000. USAID works closely with policymakers, energy sector experts and stakeholders from Bangladesh, Bhutan, India, Nepal, the Maldives and Sri Lanka. We are helping to create a workforce qualified for jobs in the green energy sector. Last year, our programming trained 3,626 regional energy leaders.

India has a profound role to play, not just in its own neighbourhood, but around the world. For 75 years, India’s legacy of support and cooperation has grown and strengthened. The Indo-Pacific strategy prioritizes “supporting India’s continued rise and regional leadership” as a key facet of our drive to build collective capacity. We have redefined how we collaborate with the Government of India to expand innovation, mo­bi­lize domestic resources and address regional and global development challenges. Our collaboration focusing on climate change mitigation also increases access to clean, reliable and aff­ordable power for all South Asian countries. Our past work in India focusing on adaptation to climate change has advanced food security and en­vironmental sustainability not just for India, but also for Africa and Asia. Over 750,000 farmers in Africa and Asia have benefited from the technologies and climate change-resilient farming te­chniques introduced by USAID/India.

In partnership with the U.S. International Development Finance Corporation, we are supporting a $41 million loan guarantee portfolio to mobilize investments for small and medium-sized Indian enterprises in renewable energy solutio­ns. We co­llaborate with India’s Ministry of Power to deploy 250 million smart meters, the lar­gest smart-meter program in the world. Th­rough regional projects such as the South Asia Re­gional Energy Partner­sh­ip, the South Asia Group for Energy and the South Asia Regional Initiative for Energy Integration, we are strengthening the capacity of our partners to scale up clean energy, while reducing emissions and championing climate action.

Over the next several years, USAID will further deepen its energy partnerships in South Asia to create a connected, resilient and energy-secure Indo-Pacific.

This blog is the third of a series titled, “Catalysing South Asia’s Clean Energy Transition”. It has been led by USAID/India with facilitation support from implementing partner United States Energy Association. It has been published as a part of its South Asia Regional Energy Hub (SAREH) programming.