Andhra Pradesh Power Generation Corporation Limited (APGENCO), one of the largest state power generation utilities in the country, has a generation capacity of nearly 5.6 GW.  The genco is responsible for power generation in the entire state of Andhra Pradesh, and has, over the years, expanded its portfolio through various thermal, hydro and solar power plants. This has helped the state in achieving an overall power surplus, especially after 2014, when the state was bifurcated and was grappling with a power deficit of 22.4 MUs per day.

APGENCO is set to add another 4,140 MW to its portfolio, covering both renewable and non-renewable sources. Besides adding new projects, APGENCO is gearing up to install emission control equipment at its power plants to lower sulphur oxide emissions from its thermal fleet. Further, to secure power supply on a long-term basis and avoid disruptions, the genco is formulating plans for coal import.

The genco has 11 hydropower projects in the state, of which the latest was the 50 MW Nagarjunasagar tail pond dam hydroelectric project, added by the company in January 2017.

APGENCO’s solar power projects include the 5.4 MW Polavaram right canal bund solar photovoltaic plant, and the 400 MW solar plant at Talaricheruvu in Ananthapuram. This 400 MW capacity was commissioned in phases between 2018 and 2019. The vendors for the project were Vikram Solar Limited (200 MW), McNally Bharat Engineering Company Limited (100 MW) and KEC International Limited (100 MW).

APGENCO experienced a decline in its plant load factor (PLF) in 2020-21, reflecting a countrywide trend in the power sector. During 2020-21, APGENCO’s TPPs achieved a PLF of 35.52 per cent. The low generation and PLF were because of lower demand in the grid due to the Covid-19 pandemic. However, the specific coal consumption of its TPPs has remained the same over the past four years. PLF performance improved during 2022-23 (as of August 16, 2022) with the company generating 7,805.46 MUs of electricity from TPPs at an average PLF of 69.11 per cent. 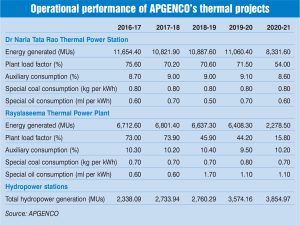 APGENCO aims to focus on both conventional and non-conventional energy sources. The utility plans to add an aggregate capacity of 4,140 MW, in order to meet the expected increase in demand. Of this, around 39 per cent will be coal based, and the remaining will be hydropower based.

The genco will add 1,600 MW of capacity in the thermal segment, through two flagship projects – the 800 MW Sri Damodaram Sanjeevaiah Thermal Power Station (SDSTPS) and the 800 MW NTTPS Stage V. the SDSTPS is being set up by Andhra Pradesh Power Development Company Limited (APPDCL), a joint venture (JV) of APGENCO and IL&FS Limited, with the two companies having a 50 per cent equity stake each in the JV. The estimated total project cost for the NTTPS is Rs 75.87 billion, while for the SDSTPS it is Rs 79.23 billion. At 80 per cent PLF, both power plants are expected to generate about 5,606 MUs of energy per annum. Project execution has been divided into two packages for both projects. For the NTTPS, the boiler-turbine-generator (BTG) package has been awarded to Bharat Heavy Electricals Limited (BHEL) and the balance of plant (BoP) package to BGR Energy Systems. For the SDSTPS, the BTG package has been awarded to BHEL and the BoP package to Tata Projects Limited. The SDSTPS and NTTPS are expected to be commissioned by October 2022 and August 2023 respectively. The projects are critical for overcoming emergency load shedding in the state, which the power utilities have been forced to resort to due to the coal crisis and other extraneous factors, according to the state’s energy minister’s statements at a recent review meeting. Construction of the projects is being expedited.

Another hydro project in the pipeline is the 1,350 MW (9×150 MW) pumped storage hydroelectric project on the river Sileru. It is currently under survey and investigation. Water and Power Consultancy Services Limited, a unit of the Ministry of Jal Shakti, is preparing the detailed project report. The project is expected to have an annual generation capacity of around 3,502 MUs and is expected to be commissioned by March 2029.

Another key area of focus for the genco is installation of flue gas desulphurisation (FGD) systems to meet the new emission norms. At a recent Power Line conference, APGENCO shared the status of FGD implementation at its projects. As per the Ministry of Environment, Forest and Climate Change’s revised classifications for meeting emission control norms, APGENCO’s NTTPS units have been placed under Category A, for which FGD systems have to be deployed by December 31, 2022. Meanwhile, the RTPP and SDSTPS units come under Category C, thus requiring their FGD systems to be completed by December 31, 2025. For its 210 MW units, the genco plans to implement wet FGD technology. Meanwhile, with regard to pass­through of investment costs for FGDs, the genco has received the go-ahead from Andhra Pradesh Power Co-ordination Committee for Units 1 to 6 of the NTTPS and Units 1 and 2 of the RTPP.

So far, tenders for NTTPS Stage V (1×800 MW) and SDSTPS Stages I and II (3×800 MW) have been invited. BHEL has submitted a bid for the former project. Techno-commercial discussions are ongoing with the company. For the 3×800 MW SDSTPS Stages I and II, while tenders have been invited, bids are yet to be received. For NTTPS Stage IV (1×500 MW) and RTPP Stage VI (1×600 MW), a technical consultant has been appointed for pre- and post-engineering, procurement and construction services. For RTPP Stages II (2×210 MW) and III (1×210 MW), the genco is planning to appoint consultants.

In view of the growing power demand and coal supply shortage, the Ministry of Power has asked states to import 10 per cent of their annual coal requirement. Therefore, APGENCO and APPDCL have initiated procurement of 1.8 million tonnes (mt) and 1.3 mt of imported coal respectively, to augment coal supply to TPPs on a long-term basis.

The addition of greenfield thermal projects as well as FGD implementation projects will help cater to the state’s increasing power requirements while meeting the environment-related regulatory requirements. The hydro capacity currently in operation and at various stages of construction, especially pumped storage power, will further help the genco in optimising the cost of generation, provided clearances and other approvals are issued in time. Net, net, APGENCO is expected to continue to play a key role in meeting the state’s energy demand and ensuring sustainable power supply.