Australia’s National Electricity Mar­ket (NEM) is witnessing a once-in-a-century shift in the manner electricity is generated and consumed. As the country races to meet the target of net ze­ro by 2050, the NEM will see a re­place­me­nt of legacy assets with low-cost re­newables, deployment of energy storage and other forms of firming capacity and reconfiguration of the power grid to enable bidirectional energy flows. Stren­g­thening and expansion of the transmission network is crucial to enable this tra­n­sition and it is imperative for the NEM to have a clear roadmap to support Aus­tr­a­lia’s ambitions. The 2022 Integra­ted Sys­tem Plan (ISP) – a whole-of-system plan to efficiently achieve power system needs up to 2050 – released by the Australian Energy Market Operator (AEMO) in June 2022 – provides this ro­ad­map for the NEM. The 2022 ISP aims to facilitate transition to a net zero emi­s­sions energy system and enable the tra­nsmission of low-cost renewable energy to supply reliable, secure and affordable power to consumers for the next three decades.

The plan is based on extensive stakeholder consultations following the pub­li­cation of the draft ISP in December 2021. The draft considered four scenarios for the pace of energy transformation on the path to reach net zero by 2050 of which stakeholders have resonated the most with the “Step Change” scenario. The 2022 ISP also sets out an optimal development path (ODP), outlining key transmission projects to meet the needs of the NEM in the coming years. These projects entail the development of 10,000 km of new transmission lines, yielding net market benefits worth AUD 28 billion by 2050, under the Step Ch­ange scenario.

Industry stakeholders, an experts’ panel and the public forum chose the Step Change scenario as the most likely one to be realised in the coming decades. This was backed by accelerated market shift towards decarbonisation through 2022, partly driven by the 26th session of the UN Conference of the Parties (COP26) commitments. Further, many coal-based plants have announced/are planning retirement, offshore wind is gaining greater traction year on year and policy efforts towards electric vehicles (EVs) are becoming more pronounced, thereby pointing towards faster emissi­on reduction across the Australian economy. In addition, the Australian government’s Rewiring the Nation policy, an AUD 20 billion investment plan to re­build and modernise the electricity grid to enable transfer of renewables, indicates the government’s resolve to­wa­r­ds fast-paced decarbonisation and emission reduction, which aligns well with the Step Change scenario. 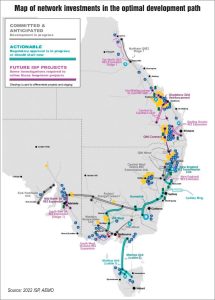 The 2022 ISP presents a generation and storage capacity forecast to meet the country’s electricity needs over the next three decades. In the Step Change scenario, the NEM’s total installed ca­pacity is forecast to increase from 60 GW at present (as of May 2022) to 173 GW by 2050. The annual energy supply to homes and industry will increase from 180 TWh to 320 TWh during the same period.

Renewable energy capacity is set to grow considerably, from 16 GW at present to 141 GW by 2050 in the Step Ch­an­ge sce­-na­rio, which is nearly a ninefold in­cre­ase. This would essentially re­quire doubling of capacity every deca­de. In addition, distributed solar is projected to increase from 15 GW to 69 GW in the same period. The share of re­ne­wables in the total annual generation would inc­rea­se from about 28 per cent in 2020-21 to 83 per cent in 2030-31 and further to 96 per cent by 2040, ultimately reaching 98 per cent by 2050. By the mid-2040s, the majority of the electricity generation will come exclusively from renewables, complemented by energy storage systems to manage variability and peaking gas-fired power plants providing firming support.

In addition, as per the Step Change scenario, 60 per cent (or 14 GW) of the existing 23 GW of coal-based capacity is likely to exit operations by 2030 and the remaining fleet may retire by 2040. The retirement of coal capacity would nece­ssitate the addition of other firm des­pat­chable generation for grid stability and security. The Step Change scenario calls for over 60 GW of firming capacity to be in place by 2050. This can be provided by utility-scale batteries, hydro storage, gas-fired generation, smart behind-the-meter batteries or virtual power plants and, potentially, vehicle-to-grid services from EVs. In addition, demand-side management will play a key role in load balancing.

Further, the 2022 ISP states that the curtailment of renewables will sometimes be efficient as it may not make economic sense to build the transmission network and storage to capture every unit of energy that is generated. Also, at times, security or operational constraints in the grid may make curtailment necessary. The ef­fi­cient level of curtailed or spilled generation in Step Change increases to about 20 per cent of the total available variable re­ne­wable energy output by 2050.

As part of the ODP, the 2022 ISP outlines transmission projects and investments that are essential to efficiently enable re­ne­wables to replace existing coal generation. The ODP comprises a range of projects classified as either actionable, committed and anticipated, or future. Together, these projects entail the development of 10,000 km of new transmission lines by 2050 under the Step Ch­an­ge and Progressive scenarios. The development trajectory of these projects is fa­ir­ly linear, indicating steady line length addition through the years.

Actionable projects under the ODP include HumeLink, Marinus Link (cab­l­es 1 and 2), VNI West (via Kerang), Sy­d­n­ey Ring and New England REZ Trans­mission Link. These projects have commissioning scheduled between 2026 and 2031. The 2022 ISP highlights that all ac­tionable projects should be completed as early as possible for enhanced be­ne­fits for consumers.

In addition, the key committed and an­ticipated projects include the Eyre Penin­sula Link, Queensland-New South Wales Interconnector (QNI) Minor, Vic­toria-New South Wales Inter­con­nector (VNI) Minor, Central West Orana REZ Tra­­nsmission Link, Northern QREZ Sta­ge 1, Project EnergyConnect (PEC) and the Western Renewables Link. The com­mitted network projects are those that have already made certain progress on five key criteria (site acquisition, co­m­ponents ordered, planning approvals, fi­nance completion and set construction timing), while the anticipated ones are those that have progressed on three of the five criteria. The tentative com­pleti­on timeline of these projects spans from end 2022 to mid-2026. 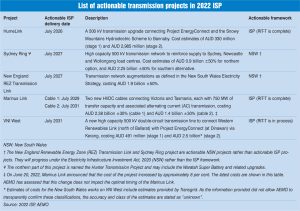 Notably, the ODP is expected to yield net market benefits worth AUD 28 billion (weighted across scenarios), returning ar­ound 2.2 times their cost of about AUD 12.7 billion, which represents just 7 per cent of the total investment in NEM generation, storage and network up to 2050. Significant benefits arise from deferring the capex of generation and storage projects as well as fuel cost savings. The tra­nsmission infrastructure ex­pansion will benefit the NEM and consumers by en­abling the transfer of zero emission re­ne­wable generation to de­ma­nd centres located far away. Without adequate transmission, NEM would ne­ed to invest in costly low emission generation technologies such as offshore wind, gas pow­er or carbon capture and storage closer to load centres.

The AEMO gives interesting insights into the 2022 ISP, highlighting the essential investments in transmission and likely shifts in generation over a 30-year period. The plan is expected to help the industry, in­vestors, governments and communiti­es plan for the decarbonisation of the po­wer system, going forward.