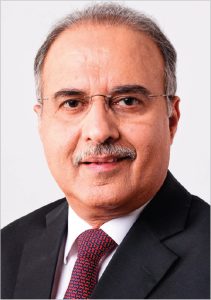 Anil Sardana, MD and CEO, Adani Transmission, and MD, Adani Power, spoke to Power Line about the current state of the power sector, its performance over the past one year or so, as well as the key issues and solutions to address them. He also discussed his top priorities and plans for Adani’s energy verticals for the next few years. Excerpts…

What is your view on the current state of the power sector?

India is now the third-largest producer and consumer of electricity worldwide, with an installed power capacity of 404 GW as of July 2022. Also, as of July 2022, India’s installed renewable energy capa­city stood at 160 GW, representing ar­ound 40 per cent of the overall ins­talled power capacity. The peak power dema­nd in the country stood at 210.79 GW on June 9, 2022.

The power sector will witness energy transition, which is an imperative that we all need to be conscious about. The world will witness the energy basket transforming drastically in this deca­de, with the share of electricity climbing to double of where we stand today, and the share of molecules will see the displacement of hydrocarbons with green hydrogen.

The Government of India (GoI) has identified the power sector as a key sector of focus to promote sustained industrial growth. The Indian electricity sector is in the middle of a major transformation with respect to demand growth, energy mix and market operations.

There are efforts, at both the policy and implementation levels, to enhance the efficiency of the sector by cutting down subsidies to consumers and charging a cost-reflective tariff. All these ef­forts, aimed at a financial overhaul of the sector, are also facing externalities. The inc­reased push for the adoption of rene­wable energy amidst the growing consensus on climate action will also affect the future of the sector. The goalpost has shi­f­ted from merely enhancing the efficiency of the sector and promoting public welfare to doing so while using bigger sha­res of renewable energy and integrating the strategy with India’s development goals.

How do you rate the performance of the power sector in the past one year or so? What were the key hits and misses?

Overall, the power sector has performed very well in providing reliable power to consumers despite the coal crisis earlier this year amidst recovery from the pandemic.

India, like in previous years, can boast of managing its generation and bulk transmission segments to be on par with global benchmarks. However, our last-mile retail distribution segment continues to stay below par, especially where it is being managed by various state-owned enterprises, due to fiscal indiscipline and interference of vested interest elements.

However, the Electricity (Amendment) Bill, 2022, which could have paved the way for distribution reforms by bringing in competition and accountability, is a clear miss and the vacillation to amend the act is a matter of concern.

What, according to you, are the biggest issues and challenges facing the power sector? What is the way forward to address them?

In the entire power sector value chain, retail power distribution is the most important link. It is the cash register for the entire sector and the merchandise seller, which is sick and bleeding. It thus poses serious challenges for other parts of product manufacturing and delivery, which could be threatened with cash flow problems. Operational inefficiencies and the lack of tariff revisions acr­o­ss most sta­tes, together with the Covid-19 lockdo­wns, have widened the reve­nue gap for discoms and enhanced co­m­mercial loss­es. Discoms’ losses were re­ported at a staggering Rs 1.04 trillion as of June 7, 2022.

Systemic flaws and operational inefficiencies at the distribution level have ma­jorly impacted discoms’ ability to meet the rising demand for reliable power. State governments, through the dis­coms owned by them, are still a monopoly and ex­hibit monopolistic tendencies, their instinct being to make their customers pay for their inefficiencies.

Ironically, India today stands at a zero demand-supply gap at the generation level and at zero congestion at the transmission level. This is an ac­complishment that could have yielded impeccable service to customers had the last mile also seen similar commitment to align with the objectives.

According to you, what should be the optimal energy mix going forward in view of the growing renewable energy integration?

Over the past decade, electricity dema­nd has grown at around 6 per cent. We be­lieve the bulk of this growth will be met easily through a mix of conventional and renewable energy sour­ces. The renewable energy movement is getting a push in India’s non-fossil en­ergy quest to meet the target of 500 GW by 2030, as announ­ced by the Ho­nourable Prime Minister, Mr Naren­dra Modi, at COP26.

However, renewable energy growth requires steep acceleration to achieve 30-40 GW per year. Historically, the maximum addition in renewable energy sources has been only 10-15 GW per year. The other key challenge is the management of the grid to meet despatchable capacity during the evenings and hours when the availability of renewable sources is limited. However, the existing coal plants play a critical role in balancing the grid to meet baseload re­quire­me­nts as well as to meet capacity wh­en renewable energy is not available due to seasonal issues. Further, owing to the non-availability of gas, round-the-clock hydro sources (pumped hydro storage) and coal will play an important role for meeting grid requirements. For despat­chable baseload capacity, benign optio­ns such as nuclear and battery storage will also play crucial roles as they beco­me economical and viable.

What is your view on the Electricity (Amend­ment) Bill, 2022 and its implications for the sector?

The primary focus of this bill is to open up choices in retail distribution for en­hanced competition in the marketplace. The monopoly of discoms over retail supply in their licensed areas will end by allowing new licensees to use the existing network on payment of a usan­ce (wheeling) charges. To guard aga­in­st selective poaching of customers, an as­sociated, new institutional mechani­sm for sharing the cross-subsidies generated is proposed.

Regulations will be needed to specify non-discriminatory access to network monitoring data for the new licensee, along with sufficiently high deterrents, penal provisions and compensation for loss of business due to system outages, in addition to compensation for customers.

In a major change, the Central Elec­tri­city Regulatory Commission (CERC) will now license applicants for distribution in more than one state. Previously, licen­sing distribution was purely the sta­te el­ec­tricity regulatory commissions’ (SERCs) fu­nction.

The bill also introduces penalties for non-compliance with renewable purchase obligations (RPOs). In addition, it proposes to ensure cost-reflective tariffs by linking with the Tariff Policy.

Overall, this bill is a stepping stone for making the sector more efficient and bringing in discipline. It is thus a welco­me initiative and customers must support it overwhelmingly.

What, according to you, are some of the immediate steps needed to revive the power distribution segment?

Given the current financial status of discoms and the earlier privatisation experience, there should be bolder moves to bring in the public-private partnership model in distribution. This will bring in new investments and at the same time, help deliver value (reliable power supply) to consumers. It is proposed that the existing discoms could be split into multiple areas (Discom Splitting Model) with a size equivalent to one or two circles of a discom. Such circles could be privatised and allocated to private players. One or two circles could also be awarded to incumbent state-owned discoms and others to private sector players through the competitive bidding process.

This way there will be no cherry-picking and all customers will be serviced. Each such circle should be evaluated after three or five years of operation with res­pe­ct to set benchmarks/targets announ­ced by the respective SERC. So­me of the parameters should be SAIDI, SAIFI, CAIDI, CAIFI, MAFIFI and creditworthiness.

After evaluation, if the privatised circle has overachieved/achieved the perform­ance targets or a higher performance le­vel as compared to the incumbent state-owned discom, the licensee should be allowed to provide services in the existing area/circle as also in the adjoining circles as a second licensee. This way all the li­cen­sees (including the incumbent government discoms) will compete and perform to increase their customer base and sustainability. At the same time, consu­mers will benefit by getting reliable electricity at competitive rates.

What is your overall outlook for the sector in the near, medium and long terms?

Energy transition is imminent and a compulsive factor that we need to in­ternalise.

Renewable energy, a new molecule in the form of green hydrogen, nuclear in new formats, and hydropower will have larger play in the times ahead.

Coal will continue to be mainstream for meeting baseload requirements in the short to medium term and will likely get replaced with battery energy storage sys­tems and nuclear in the longer run.

With an added push from the government, renewable energy will see exponential growth in the next several years and may see various new and improved technologies.

Nuclear could be the new green energy for the long term, especially in small modular reactor formats, with the new market dynamics.

What are your top priorities and plans for Adani’s energy verticals in the next one to two years? What are some of the opportunities that Adani is pursuing?

The Adani Group aspires to provide clean and affordable power to meet In­dia’s growing energy needs, in line with our brand promise of “Growth with Good­ness”. We believe the bulk of de­mand growth will be met through rene­wable energy sources and the advent of green hydrogen to be the new molecular energy. This is reflected in India’s non-fossil energy target of 500 GW by 2030, as an­nounced by the Honourable Prime Mi­nister, Mr Narendra Modi, at COP26. This is also reflected in the Ad­a­ni Gro­up’s ambition of investing $20 billion by 2030 in renewables, with Adani Green Energy Limited’s target of achieving 30 GW of renewable capacity by FY2026. In addition, the Adani Group has committed to spending up to $70 bi­llion in the green ecosystem, including in the hydrogen economy and do­wn­stream use cases.

Adani Power is aggressively pursuing op­portunities across segments with the ob­jective of providing round-the-clock, reliable power at competitive prices to the people of India. To achieve this, we will be expanding our fleet to meet the growing baseload demand due to intermittent av­ailability of renewable energy.

In the short term, Adani Power’s efficient supercritical thermal plants will be taking key steps such as sourcing Carmi­chael coal, which is 10-30 per cent less emission intensive per unit of electricity compared to a typical basket of Indian do­mestic coal in order to significantly reduce emissions.