The year 2021-22 witnessed investors and lending institutions increasing their focus on renewables as energy transition gathered pace in India. The country’s ambitious clean energy targets announced at COP26 in Glasgow have further heightened the interest of domestic and international investors in the renewable energy sector. Meanwhile, the conventional power sector, especially thermal, is grappling with stressed assets, which are seeing a slow-paced resolution with lenders taking sharp haircuts in recovering their outstanding debt. Further, sanctions and disbursements by key power sector lenders, the Power Finance Corporation (PFC) and REC Limited, are still affected by the fallouts of the Covid-19 pandemic.

The cumulative disbursements by PFC and REC totalled nearly Rs 1,154 billion in 2021-22, a decline of over 36 per cent over the Rs 1,813 billion recorded in the previous year. The cumulative sanctions too witnessed a significant reduction of 67 per cent, from Rs 3,212 billion in 2020-21 to Rs 1,060 billion in 2021-22. The decline in sanctions and disbursements can be attributed to delays in the commencement of works at several power projects due to labour shortages, supply issues, etc., during the pandemic.

In terms of sectoral deployment of bank credit, loans to the power sector stood at Rs 6,270.5 billion as of July 2022 vis-à-vis Rs 5,717.5 billion in July 2021, an increase of 9.7 per cent. Further, bank credit to the renewable energy sector, which comes under priority sector lending, increased by an impressive 89 per cent to Rs 42.39 billion from Rs 22.45 billion during the same period.

As per the Institute for Energy Economics and Financial Analysis’s recent report on “Renewable Energy Investment Surges in India”, the total investments in the renewable energy sector amounted to $14.5 billion in 2021-22. Over 57 per cent of the investment deals in the period included capital investment in five renewable energy companies – SB Energy, ReNew Power, Vector Green, REC Limited and Azure Power. A big ticket deal in recent months is the acquisition of Mytrah Energy’s 1.7 GW renewable energy portfolio by JSW Energy in August 2022. 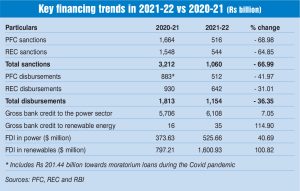 With the climate change and environment, social and governance (ESG) themes dominating the investor landscape, the interest in green bonds is increasing in India. As per the Union Budget 2022-23, sovereign green bonds will be issued for mobilising resources for green infrastructure as part of the government’s overall market borrowings in 2022-23. The proceeds will be deployed in public sector projects that help in reducing the carbon intensity of the economy. The government is reportedly planning to issue sovereign green bonds valued at least Rs 240 billion and the initial sale is expected to take place in the first half of 2022-23.

As per the UK-based green bond tracking agency, Climate Bonds Initiative, the issuance of green, social, and sustainability debt in the Indian market grew to $7.5 billion in 2021, recording nearly a six-fold increase over the previous year. Many developers such as ReNew Power, Azure Power and Vector Green have attracted huge investments through green bonds in the past few months. In January 2022, ReNew Energy Global raised $400 million by issuing senior secured dollar notes, recognised as green bonds by the Climate Bonds Initiative, at a rate of 4.5 per cent. The bonds were listed on the Singapore Exchange. In November 2021, the State Bank of India listed its $650 million green bonds simultaneously on the India International Exchange and the Luxembourg Stock Exchange. The state-owned bank has raised $800 million in the green bond market so far.

During 2021-22, PFC resolved Rs 27.87 billion from Essar Power MP Limited, RS India Wind Energy, GVK Ratle, Astonfield Solar and Krishna Godavari. As a result, its net non-performing assets declined to 1.76 per cent in 2021-22 compared to 2.09 per cent in 2020-21. REC also resolved three projects under the Insolvency and Bankruptcy Code – Essar Power MP Limited, Amrit Jal Ventures Private Limited and VS Lignite Power Private Limited – wherein REC had an exposure of Rs 14.03 billion. Recently, in September 2022, NTPC Limited successfully acquired Jhabua Power Limited (JPL) for Rs 9.25 billion through the corporate insolvency resolution process (CIRP) initiated by the National Company Law Tribunal (NCLT). This is the first acquisition of a power asset by NTPC through the NCLT route. It is a unique resolution plan wherein NTPC has offered 50 per cent equity stake in JPL to the secured financial creditors while it has retained all the management rights and control over the company. JPL has an operational thermal power plant of 600 MW in Seoni, Madhya Pradesh. PFC is the lead lender to the project.

In the same month, PFC successfully resolved India’s largest stressed asset, South East UP Power Transmission Company Limited (SEUPPTCL), in the transmission sector via the CIRP. Resurgent Power Ventures Private Limited acquired SEUPPTCL in a transaction entailing payment for a one-time settlement of outstanding debt and purchase of equity shares for a total consideration of Rs 32.51 billion and a payout of the existing cash balance of SEUPPTCL as outlined in the resolution plan.

Going forward, the investment needs of the Indian power sector are expected to grow manyfold, driven mainly by renewables. As per the International Energy Agency, about $160 billion per year is needed, on average, across India’s energy economy between 2022 and 2030 to achieve net zero emissions by 2070, which is three times today’s investment levels.