The operational performance of po­wer utilities has improved during the past year, with an increase in econo­mic activities post-Covid. Power de­ma­nd has increased, which is also reflected in the rising utilisation levels, measured by the plant load factor (PLF) of thermal po­wer plants (TPPs). The majority of the state transmission utilities fared well in the past year, reporting a decline in transmission losses. The aggregate technical and commercial (AT&C) losses of disco­ms have also reduced, although they are still above the targeted level of 15 per cent in most states.

Of the 34 utilities tracked by Power Line Research during 2021-22, 26 utilities re­ported an increase in PLF over the previous year. The highest PLF (at 94.19 per cent) was reported by Sasan Power Limi­ted, which operates the 3,960 MW Sasan ultra mega power project in Madhya Pradesh, followed by Singareni Collieries Company Limited (SCCL) with a PLF of 88.97 per cent. SCCL operates the 1,200 MW Singareni TPP in Telangana. 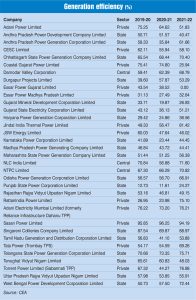 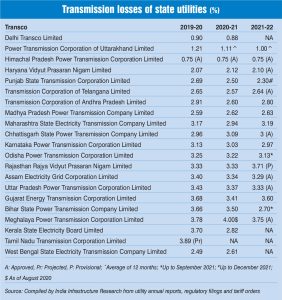 Data was collated by Power Line Resear­ch for 60 discoms (46 state-owned distribution utilities and 14 private utilities) from tariff orders, BEE energy audit re­po­rt and company reports. It is observed that among state utilities, AT&C losses ranged from as low as 5.16 per cent for Uttar Gujarat Vij Company Limited (UGVCL) to as high as 65 per cent for the Jammu & Kashmir Power Development Department (JKPDD) during 2021-22.  Overall, most of the state utilties have reported a dec­line in AT&C losses during 2021-22 vis-à-vis 2020-21. The most significant impro­vements were reported by Andhra Pra­de­sh Eastern Power Distribu­tion Com­pa­ny Limited (APEPDCL), An­dh­ra Pradesh Central Power Distribu­ti­on Company Limited (APCPDCL), Cha­mun­deshwari Electricity Supply Com­pa­ny Limited (CESCOM), and Maha­rashtra State Electricity Distribution Company Limited (MSEDCL), which reported a decline of over 10 percentage points in AT&C losses.

The worst performing state-owned utilities during 2021-22 were JKPDD, Dakshinanchal Vidyut Vitran Ni­gam Limited (DVVNL) and South Bi­h­ar Power Distribution Com­pany Limited (SBPDCL) with AT&C losses of 65 per cent, 38.24 per cent and 34 per cent respectively. Meanwhile, private sector discoms continued to report a steady performance with losses of less than 10 per cent over the past couple of years. Only the four Odisha discoms, which were acquired by Tata Power during 2019-20 and 2020-21, have losses of 23 per cent-33 per cent. Tata Power Mumbai’s AT&C losses during 2021-22 were less than 1 per cent.

Meanwhile, Adani Electricity Mumbai Limited reported AT&C loss of 6.55 per cent during 2021-22. Among Delhi discoms, BSES Yamuna Power Limited (BYPL), BSES Rajdhani Power Limited (BRPL) and Tata Power Delhi Distribu­ti­on Limited recorded AT&C losses of 7.27 per cent, 6.87 per cent and 6.8 per cent re­spectively. In Gujarat, AT&C losses of Torrent Power-Surat and Torrent Power-Ahmedabad stood at 3.72 per cent and 4.32 per cent respectively. Meanwhile, No­ida Power Company Limited’s (NPCL) AT&C loss was recorded at 7.95 per cent. Other private discoms (which reported T&D losses during the review period) also improved their performance. The T&D loss for India Power in West Bengal was recorded at 3 per cent. 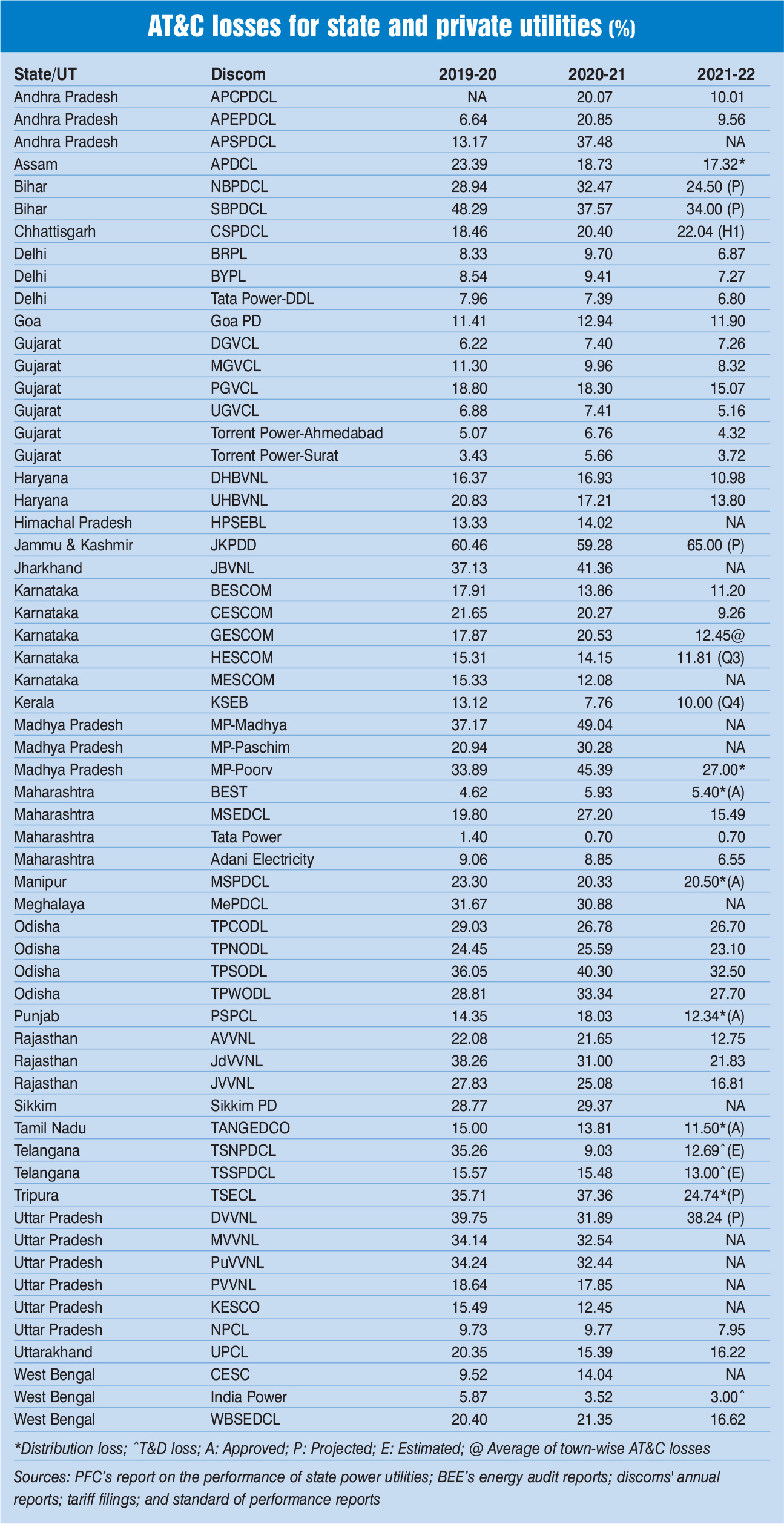 Overall, power utilities have seen a recovery in their operational performan­ce post-Covid-19. The thermal power generation segment was reeling with declining PLFs, which has improved with the resumption of economic activities and in­crease in power consumption. The electricity distribution segment has se­en some improvement in its operational performance. However, the go­vernme­nt’s recently launched Revamp­ed Distri­bu­tion Sector Scheme is expected to stren­g­then the distribution network and im­prove the operational and fin­ancial per­formance of utilities. Additio­nally, the la­te payment surcharge rules will allow discoms to clear their past dues in eq­uated monthly installments. This will improve the financial position of the segment, which has so far re­ma­ined the weakest link in the electricity value chain.