Power markets have emerged as a key driver and enabler as India charts its transition to a carbon-neu­tral future. Offering a spectrum of products with flexibility, competitive prices, transparency, payment security, risk management and greater choices, po­wer markets have an opportunity to accelerate the energy transition. The short-term trading market has evolved significantly and recorded trading volumes of 186.75 BUs during 2021-22. The power exchanges accounted for 54.3 per cent of the total volumes traded, achieving an all-time high volume of 101.45 BUs. This indicates a major shift in the Indian power market, which has been lar­gely dominated by bilateral deals.

The market saw several key developments in the past one year. In April 2022, with the market clearing prices frequently touching Rs 20 per unit due to the early onset of summer and an increase in economic activities with the lifting of Covid-related restrictions, the Central Electri­city Regulatory Commi­ssion (CERC) imposed a price ceiling of Rs 12 per unit across all segments till June 2022, which was later extended till September 2022 and has recently been extended on­ce again till December 2022. The Mini­stry of Power (MoP) has also proposed to introduce a high-price market segment for the day-ahead market (DAM) within the existing integrated DAM. In a significant recent development, Power Exchan­ge India Limited (PXIL) has introduced any-day single-sided reverse auction con­tracts that enable buyers to meet the­ir power requirement for a period of up to 90 days ahead. 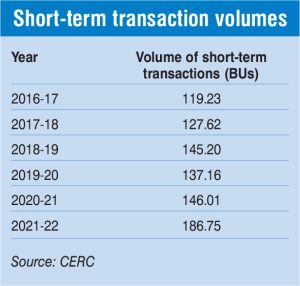 During 2021-22, short-term trading volumes were recorded at 186.75 BUs, whi­ch accounted for 14.1 per cent of the total generation (excluding generation from renewable energy and captive po­wer plants) during the year. The short-term market has shown an increase of 27.9 per cent during 2021-22 over 2020-21, when 146.01 BUs were traded. Since 2016-17, the volume of short-term transactions has grown at a compound annual growth rate (CAGR) of around 9.4 per cent, while power generation has grown at a CAGR of 1.24 per cent. 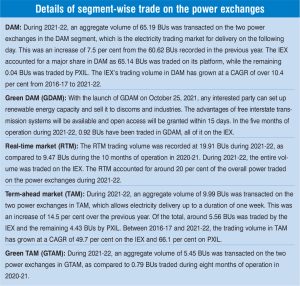 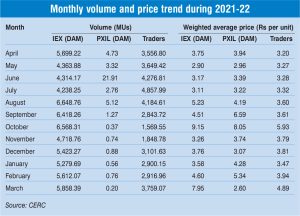 The central government notified the Electricity (Promoting Renewable Ener­gy through Green Energy Open Access) Rules, 2022 on June 6, 2022. These rules have been notified for promoting the generation, purchase and consumption of gr­een energy, including energy from was­te-to-energy plants. Additionally, green OA for consumers with a contracted load of 100 kW and above, cap on increasing the cross-subsidy surcharge as well as the removal of additional surcharge are expected to not only incentivise consumers to go green but also address the issues that have hindered the growth of OA in India.

Further, the National Open Access Re­gistry has successfully gone live from May 1, 2022. This will enable automati­on, increase efficiency and transpa­rency in transmission allocation, thereby enabling greater efficiency in the power market.

Renewable energy certificates: After a long halt of 16 months, the two power ex­changes resumed renewable energy certificate (REC) trading in November 2021, in line with the orders of the Ap­pellate Tribunal for Electricity ( APTEL) and the CERC. REC trading was suspended in July 2020 by APTEL upon he­aring three separate petitions related to the fixing of fl­oor and forbearance prices by the CERC. During the five months of 2021-22, a total of 8.46 million RECs were traded on the two exchanges. Of the­se, 1.36 million we­re solar RECs and 7.1 million were non-solar RECs. Mean­while, the market clearing volume of solar and non-solar RECs was 0.15 million and 0.77 million, respectively, during three months (April to June) of trading in 2020-21.

Energy saving certificates: Energy saving certificates (ESCerts) are issued to plants that have achieved excess energy savings over and above their targets. Units that are unable to meet the targets either th­rou­gh their own actions or through ESCert purchase are liable to financial penalty under the Energy Conservation Act, 2001. The IEX commenced trading in ESCerts under the Perform, Achieve and Trade (PAT) Cycle-II on October 26, 2021. In the first transaction in October 2021, the exchange traded 43,409 ESCer­ts and in November 2021, it traded 242,733 ESCerts. Meanwhile, PXIL did not trade any ESCerts in October 2021; however, in November 2021, it accomplished trade in 13,375 ESCerts. Trading in ESCerts was paused until December 31, 2021 as per directions issued by the MoP on Novem­ber 25, 2021. As per the Energy Conser­va­tion (Amendment) Bill, 2022, introduced in the Lok Sabha recen­tly, the central government may issue ESCerts to designated consumers (DCs) having energy consumption of less than the prescribed norms and standards. The defaulting DCs will be entitled to purchase ESCerts to comply with the prescribed norms and standards. 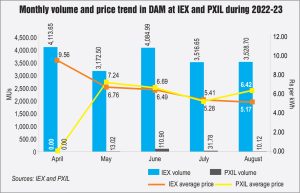 Several key developments took place on the power trading front in the past one year.

Commencement of operations of a third power exchange: The Hindustan Power Exchange (HPX), promoted by PTC India Limited, the Bombay Stock Exch-­an­ge and ICICI Bank, has commenced operations with effect from July 6, 2022, after receiving all the necessary appro­vals from the CERC. The exchange initially offered trading in contingency contra­c­ts, green contingency contracts and RECs. However, with effect from July 28, 2022, it also launched DAM, GDAM and RTM on its platform. Currently, over 175 members are already registered on the HPX and are expected to participate in these segments to meet their trading needs. In just two weeks of its operations, the HPX has reached the milestone of crossing 100 MUs of traded power.

Price cap: The CERC, vide its order dated May 6, 2022, capped the price on power exchanges at Rs 12 per unit ac­ross all market segments till June 2022. Later, a review was undertaken and it was felt that the high electricity demand is likely to continue over the next few months due to an increase in economic activity, high agricultural load and an increase in the household demand, which might put pressure on market prices once again. In order to protect consumer interests, the commission has extended the applicability of the order till Sep­tember 30, 2022. Recently, in Sep­tember 2022, another review was undertaken and it is expected that despite the fall in temperature, high demand for el­ec­tri­city, particularly from household and industrial consumers, is likely to con­­tinue over the next few months, ma­in­ly due to the festive season and the pressure emanating from lighting and heating load. Moreover, agricultural load will persist over the next few months on ac­co­unt of harvesting of kharif crops and sowing of winter crops. In view of this, the CERC has further extended the ap­plicability of the order till December 31, 2022. Due to a price cap of Rs 12 per unit, generators that have a high variable cost are unable to participate in the market. Against this background, the MoP has proposed to introduce a high-price market segment for DAM (HP-DAM) within the existing integrated-DAM. The sellers with variable cost gre­ater than the price cap of Rs 12 per unit will be allowed to sell power in this market. Only buyers that have a deficit and can afford to pay a high price will be able to participate in this segment.

Introduction of any-day contract: PXIL has introduced an any-day single-sided reverse auction contract that enables buyers to procure power to meet their power requirement for a period of up to 90 days ahead. The reverse auction happens in two stages, that is, initial price off­ering (IPO) and reverse auction. Interested sellers can submit their offers specifying the quantum and price (in the IPO stage. Later, in the reverse auction stage, qualified sellers may improve their offers within the defined period of a two-hour session. On the completion of the reverse auction, offers would be rank­ed from the lowest to highest price till the buyer’s requisitioned quantum is fulfilled. The buyer then has a right to accept or reject the ranked offers. On receipt of acceptance from the buyer, the exchange will submit application for scheduling power delivery. Earlier, in December 2021, PXIL launched the integrated day-ahead spot market, a collective transaction that integrates transactions for renewable energy with conventional energy.

The Indian power trading market has become an inevitable part of the power sector value chain. The government ai­ms to deepen power markets by incr­ea­sing the share of spot markets to 25 per cent by the year 2023-24. Overall, new product launches, incremental trading volumes (approximately 100 BU opportunity for exchanges as plans to phase out coal plants are under way and no new long-term power purchase agree­me­nts have been signed for thermal power) and favourable policy and regu­la­tory initiatives are expected to drive the power trading market growth in the next few years. 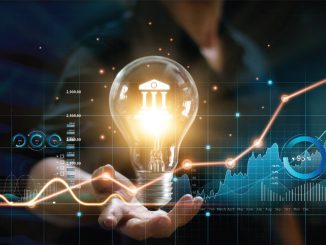 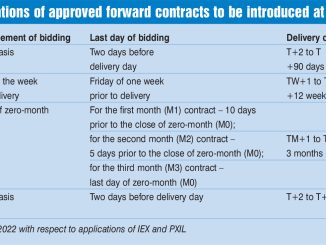 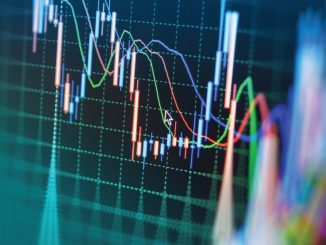 June 15, 2017
Power trading has emerged as a viable option for industrial and commercial consumers looking to sell and [...]
More