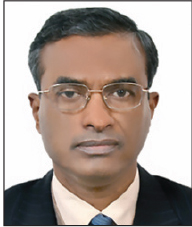 Insulation coordination is the pro­cess of correlating the dielectric strength of electrical equipment and the characteristics of protective devices with expected over-voltages. The entire aspect of insulation coordination is ba­sed on the statistical phenomena of probability of overvoltage as well as probability of disruptive discharge of insulation due to overvoltages. The risk of insulation failure depends on the probabilities. Although a certain risk of failure is acceptable, how large a risk can be tolerated depends on economic and service reliability considerations. The­re­fore, the insulation level relates more to the statistical data than to mathematical function.

Overvoltages causing stress on dielectric strength of insulation may be classified as follows: 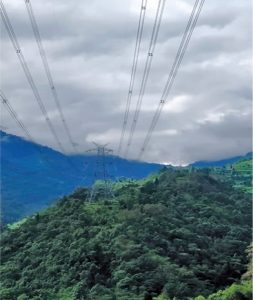 Temporary overvoltages are caused by earth faults, sudden load rejection, resonance or ferro-resonance, other system contingencies and are in the form of undamped or slightly damped oscillations, having frequency equal or close to power frequency and persisting for a duration of a few cycles to a few seconds. Sw­it­ching impulse overvoltages are ca­u­sed by power line switching, high spe­ed auto-reclosing, out-of-phase switching of cable, capacitor bank, shu­nt reactor, circuit breaker re-striking persisting for a duration in the range of thousand microseconds. Swit­ching im­pulse overvoltages are predominant in a power line of 400 kV voltage level and above, due to line charging current and must be controlled to avoid the need for higher insulation. Lightning impulse over-voltages are in­dependent of system voltage, but de­pe­nd on system impedance and are caused by direct strokes on the conductor persisting for a duration in the range of microseconds. 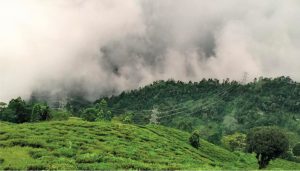 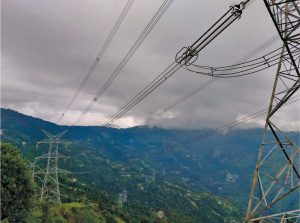 For economic reasons and industrial pra­ctice, equipment is designed to withst­and the required withstand voltage within the range of normal service conditions viz. maximum ambient temperature of 40 °C, altitude not exceeding 1,000 met­res. Ac­cordingly, standard insulation levels, whi­ch 400 kV AC equipment can withstand, for normal service conditions have been adopted as indicated below:

For equipment operating at an altitude higher than 1,000 metres, the clearance requirements are increased by 1 per cent for every 100 metres above  1,000 metres. 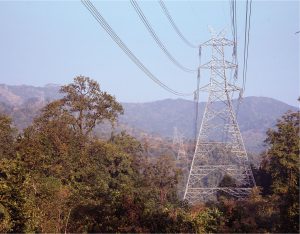 Teestavalley Power Transmission Limit­ed has implemented an interstate 400 kV double circuit quadruple ACSR moo­se conductor power line of length 215 km for the evacuation of power from a large hydro generating complex in Sikkim of around 3,000 MW in the Teesta river basin. The power will be supplied to the eastern region, for onward transmission to the northern region/western region. The power line emanates from the 400 kV pothead yard of the Teesta III hydroelectric project (HEP) of 1,200 MW capa­city located at Mangan in north Sikkim, the second largest HEP in India, and terminates at the 400 kV Kishanganj GIS pooling station in north Bihar. Two 400 kV XLPE cables connect the pothead yard and the 400 kV GIS switchyard of the Teesta III HEP located at altitudes of 870 metres and 792 metres respectively. The dam of the Teesta III HEP on the Teesta river is located at the confluence of the rivers Lachung and Lachen at an altitude of 1,590 m. It is situated at Chungthang near the Indo-China border. The inter-state overhead power line travels in the most difficult hilly terrain of north, east and south Sikkim. More than half of the total 589 towers of the line are located in the steep hill slope with an altitude as high as 2,600 metres wh­ere hard rock soil and dry fissured rock are predominant. Due to this tower footing resistance increases to a large extent. All the towers in the hilly terrain consist of chimney ex­tensions up to 12 metres as well as leg extensions of length from (-) 9 metres to (+) 9 metres. Many towers also consist of body extensions up to 30 metres. Rest of the towers are located in the plains of North Be­ngal and North Bihar at altitudes up to 1,000 metres. The maximum height of a tower from the highly undulated lowest gr­ound level in the steep hilly area including chimney extensions, leg extensions and body extensions, is as high as 117 metres. The entire terrain is highly prone to lightning with isometric level of 50-60 per year.

Lightning surge overvoltage was computed on pothead yard terminals of the Teesta III HEP with direct lightning stroke on the first tower of the 400 kV Teesta III-Kishanganj line with lightning currents of 120 kA corresponding to negative flashes and 200 kA corresponding to positive flashes. The maximum lightning overvol­tages at pothead yard terminals with 120 kA negative flashes and 200 kA positive flashes were determined as 1,140 kV and 1,240 kV respectively. These lightning overvoltages were within safety margins of 25-15 per cent, with the lightning im­pulse withstand level of 1,425 kV, as specified for switchyard equipment.

Based on the basic impulse level of 1,550 kV, the switching impulse withstand level of 1,050 kV and the power frequency wi­th­stand level of 680 kV, Teestavalley Po­wer Transmission Limi­ted has selected the following composite long rod in­sulators on the 400 kV D/C quad moose Tee­sta III HEP-Kis­han­ganj line in plain terrain with an altitude of up to 1,000 metres: 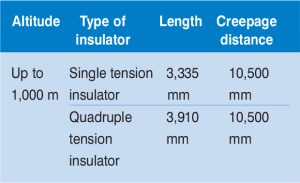 These composite long rod insulators for altitude up to 1,000 m were type tested for the impulse levels as mentioned earlier.

After taking into consideration the appropriate atmospheric and altitude correction factor as indicated in the proceeding para, Teestavalley Power Trans­mission Limited has selected the following composite long rod insulators on the 400 kV D/C quad moose Teesta III HEP – Kishanganj line in hilly terrain for altitude up to 2,300 metres. 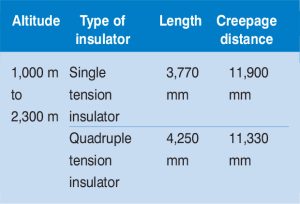 These composite long rod insulators for the hilly terrain were successfully type tested by Teestavalley Power Transmis­sion Limited at the Central Power Rese­ar­ch Institute, Bangalore in the year 2011. These insulators are suitable for altitude up to 2,300m, for the following impulse levels: 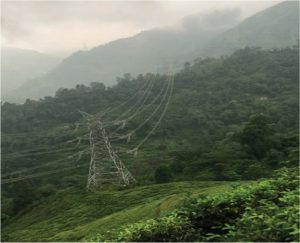 Although the design and engineering of composite long rod insulators was carried out at the highest altitude of 2,300 m as envisaged during the planning stage, one tower was required to be constructed at an altitude of 2,600 metres due to prevailing site conditions.

To conclude, Teestavalley Power Trans­mission Limited has installed composite long rod insulators of length 3,770 mm and 4,250 mm with creepage distance of 11,900 mm and 11,330 mm respectively and with the basic impulse level of 1,821 kV in the 400 kV D/C quadruple ACSR moose conductor power line. It connects the Teesta III HEP in north Sikkim to the Kish­anganj Pooling Station in North Bih­ar through Darjeeling in North Bengal with altitudes up to 2,600 metres from the me­an sea level. The composite long rod in­sulators take care of uncertainties in the application of atmospheric and altitude correction in the Himalayan region.