South Asia (SA) is one of the most vulnerable regions to adverse climate change events. One-fourth of the world’s population residing in South Asia experiences extreme weather conditions. The Bay of Bengal region has a high propensity for cyclonic events. The Climate Risk Index ranks Bangladesh 7, Nepal 10 and Pakistan 8 among the 10 most affected countries from 2000-2019. Climate change is expected to affect lives globally and endanger critical infrastructure, including energy. The increase in climate-related incidents emphasizes the need for a clarion call for sustainable and resilient energy infrastructure. 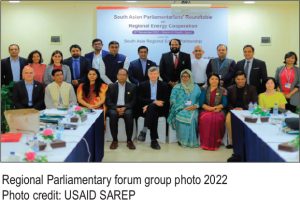 South Asian countries rely heavily on fossil fuel for their electricity supply (63.6 percent of their electricity capacity is based on fossil fuels), and self-sufficient energy needs. Power alone accounts for 44 percent of the total fossil CO2 emissions. Recognizing these threats, South Asian country governments are ratcheting up their clean energy targets to minimize emissions. The recent turmoil in global markets suggests that energy systems will aim to achieve the multiple objectives of energy security, affordability, and accessibility.

South Asian countries are endowed with enormous clean energy resources. Countries along the Himalayan belt have a combined hydro resource potential of 350 GW, of which only 18 percent has been tapped. The region also has tremendous solar and wind potential. Energy cooperation, specifically cross-border electricity trade (CBET), will support optimal utilization of clean energy resources in the region, lowering the cost of power and reducing GHG emissions.

As per a World Bank study, unrestricted electricity trade provision would save US$226 billion (US$9 billion per year) of electricity supply costs from 2015 to 2040, thereby reducing regional power sector carbon dioxide emissions by 8 percent. Hydropower would increase by 2.7 times over the next two decades if unconstrained flow of electricity could be facilitated.

With an upsurge in cross-border transmission and interconnection, power trade is expected to increase to about 43.8 GW by 2040. With the One Sun, One World, One Grid (OSOWOG) initiative pioneered by the Government of India and Green Grids Initiative (GGI)-OSOWOG, the region will get interconnected beyond South Asia.

Although power trade in the region has been limited to bilateral co-operation, countries in the region recently started trading power through the market mechanism, i.e., power exchanges (PX). Nepal started participating in the Indian PX in April 2021 followed by Bhutan in January 2022. Electricity price discovery through PX platforms is transparent and competitive, thereby offering the best price value for consumers.  The region is also exploring trilateral power trade.

In this context, Climate Parliament (CP) in partnership with USAID/India under its South Asia Regional Energy Partnership (SAREP) program organized a day-long South Asian Parliamentarians’ Roundtable on Regional Energy Cooperation (REC) on November 8, 2022 at Sharm El-Sheikh at Egypt on the sidelines of COP27. MPs from BBINS countries with international energy experts USAID/India, SAREP and Climate Parliament were a part of the deliberations.

The parliamentarians deliberated the policy implications and challenges in South Asia for advancing regional energy cooperation and CBET. The importance of how parliamentary networks can help in influencing government action were discussed along with examples from Europe and Africa.

The participating parliamentarians agreed to jointly strengthen regional energy cooperation and transition to mitigate climate change and promote energy security. They decided to lay the foundation of a Regional Parliamentary Forum, in line with their respective governments, to overcome differences and promote energy cooperation and trade in South Asia.

This blog is the fifth and final blog in a series titled, “Catalysing South Asia’s Clean Energy Transition”. It has been led by USAID/India with facilitation support from implementing partner United States Energy Association. This blog has been published as a part of USAID’s South Asia Regional Energy Hub (SAREH) programming.