The renovation and modernisation (R&M) and life extension (LE) of a TPP is a cost-effective way of generating additional power from the existing units at a lower cost and in less time. The R&M of a plant increases its operational efficiency and enhances power generation. The R&M programme aims to install the latest technology, equipment and systems at TPPs to enhance their efficiency, reliability and output, and optimise their operation and maintenance (O&M) re­quirements. It also defers the construction of new power plants and saves on capex along with resolving issues of land acquisition and compensation. The ob­jective of R&M is not just to help the plant regain lost efficiency, but also to improve environmental performance and output reliability of the plant.

Recently, GE Power India Limited along with its affiliates, in consortium with NGSL, completed its steam turbine R&M project at NTPC’s Ramagundam super thermal power station. It led to a re­mar­kable improvement of 9.9 per cent in the turbine heat rate and ex­te­n­ded the turbine life by 20 years. This led to an average improvement of 3.8 per cent in the thermal efficiency of Units 1 and 3. The upgraded units are capable of supporting 0.212 million metric tonnes per year potential annual savings in coal consu­m­ption while also reducing CO2 emissions.

The R&M programme aims to mitigate problems arising due to generic defects and design deficiencies, inefficient ope­ration, obsolescence of equipment and replacement of equipment in case of unforeseen failures; and help meet the environmental norms for PM, SO, NOx, mercury and water consumption. For each plant’s specific need, there are different R&M alternatives.

R&M programme, LE and uprating: In this process of R&M, the focus is on eq­uipment facing fatigue stress and creep because of high temperatures. This includes turbine rotors and casings, HP pipings, boiler headers, boiler drums, main steam piping and valves. A residual life assessment (RLA) study using non-destructive and destructive tests helps estimate the remaining life of critical components and helps determine measures to extend the life of those components, sometimes even up to 15-20 years. An RLA study can be carried out after 100,000 hours of operation if the need arises. Under this programme, examinations to determine viable alternatives for modernisation are conducted. The timely adoption of specific technologies can increase output and efficiency. 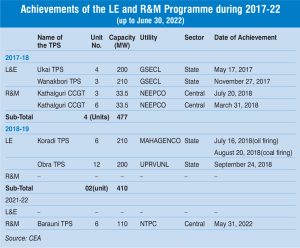 R&M programme for meeting environment norms: With the introduction of tightened environmental norms, the scope of the R&M programme, which was earlier limited to the upgradation of electrostatic precipitators for particulate matter control, has been expanded to controlling SOx and NOx emissions. TPPs require installation of flue gas desulphurisation systems, combustion optimisation and retrofitting at the units to tackle SOx and NOx emissions. The need to reduce water consumption in TPPs along with the shift to biomass co-firing has created opportunities for the R&M of TPPs.

R&M programme for flexibilisation: Plants need flexibilisation to deal with the intermittency of renewable energy generation. The flexibilisation of power plants has been picking up pace, and needs sophisticated automation and refurbishment of boilers, turbines and mills. Syn­chronised IoT-based technology is needed to monitor the cyclic load variation and control the start-stop operation. To ini­tiate the process, certain stu­dies and tests need to be conducted on thermal units in order to determine how the minimum load can be reduced and ramp rate can be improved. These studies help determine the necessary measu­rements for the optimisation of existing controls. Thermal feasibility study and stre­ss ana­ly­sis are the key processes in­volved in flexi­bilisation. Based on these examinations, the condition monitoring system can be installed and the control and ins­tru­mentation system can be upgraded, etc.

Progress in R&M of TPPs

The Central Electricity Authority (CEA) had identified 71 units with an aggregate capacity of 14,929 MW for R&M/LE wor­ks for the period 2017-22. For LE works, a total of 34 units (aggregating 7,570 MW) have been identified in the state sector; and for R&M works, 30 units (7,135 MW) have been identified in the state sector and seven units (224 MW) in the central sector. Up to June 2022, a total of seven un­its comprising a capacity of 997 MW underwent R&M/LE wo­rks under the programme. These included units owned by NEEPCO (Kathalguri CCGT), Gujarat State Electri­city Corpo­ra­tion Limited (Ukai and Wankabori stations), Mahagenco (Koradi station), Uttar Pradesh Rajya Vidyut Utpadan Nigam (Obra station) and NTPC Limited (Barauni station).

The planning, management and implementation of R&M projects come with numerous issues. There have been dela­ys in target completion due to the slow supply of materials, which leads to ex­ten­ded shutdowns. While a large number of TPPs units require R&M/LE works, it comes at a cost of power plant downtime leading to power shortages. With the ever-growing demand, competitive intensity is in­creasing, creating a heavy burden on the supply side. Even though Ministry of Power is actively taking measures to promote R&M projects, the rate of implementation remains slow. The scarcity of funds with power plant developers and op­erators, and lack of investor confid­e­nce in R&M projects add to the challen­ges. There are also technical performance problems such as blackouts, tra­nsmiss­i­on and distribution losses, and low ac­cess rates.

The aforementioned issues call for a new approach towards the implementation of R&M/LE works, which require accurate identification of plant-specific R&M options, realistic time schedules and increased participation from executing agencies.

Most of the utilities approach the R&M programme in two ways. The first ap­proach involves setting up a plan with the scope of work outlined on the basis of condition assessment, plant operation data and feedback from O&M engineers. The set of activities is then enlisted and implemented, minimising downtime and generation loss, but often the benefits from the process are limited. The second approach involves the implementation of a comprehensive scheme in one tranche after ensuring adequate input supply. The benefits of the process are definable and quantifiable.

The government has been watchful of the delays experienced in various R&M projects. The government recommends setting up dedicated R&M teams by the utilities to improve the efficiency of R&M works, reducing the time gap bet­ween DPR and RLA studies. The gover­n­ment suggests that financing for R&M/ LE works should be sourced beforehand to avoid delays.

Net, net, R&M has been recognised as one of the most cost-effective options to increase power generation and im­p­rove compliance with environmental norms. When coupled with the LE programme for old thermal power units, it can increase their useful life by 15-20 years, beyond the original design’s economic life.

Flexible Operations: CEA comes out with recommendations for TPPs

India aims to achieve 175 GW of installed renewable energy capacity by 2022. While this is expected to lower carbon emissions and help meet the growing energy demand, the integration of renewables into the grid […]

The power sector scenario in India is changing significantly in line with the country’s commitment to explore low-carbon pathways for energy generation and emission reduction. As per its Intended Nationally Determined Contribution (INDC), India has […]