The Indian power distribution segment is undergoing development and reforms at various levels. Apart from high aggregate technical and commercial losses, it is dealing with rising power purchase costs and other financial constraints. Even though there are guidelines for power purchase, discoms need to be better equipped to deal with demand forecasting as well as scheduling estimates.

The Electricity Act, 2003 and the issuance of guidelines and bidding documents by the Ministry of Power have facilitated power procurement through the competitive route. Competitive bidding leads to reduced power purchase costs, which typically account for 70-80 per cent of the average cost per unit. Effective power procurement also leads to affordable power being supplied to consumers.

As per India Infrastructure Research, the power purchase cost per unit of input energy was around Rs 3.71 in 2014-15. Many states have resorted to load shedding on account of the non-reflective tariffs and delays in the recovery of such additional costs, which have added to their financial burden.

After private players withdrew from bidding for the Bedabahal and Cheyyur ultra mega power projects (UMPPs), leading to the cancellation of the tendering process in 2015, the central government realised the need to reform the SBDs. These revisions attempt to address developer concerns regarding variations in imported coal costs through a provision for blending. They propose that UMPPs be set up on a build-own-operate basis and follow the conventional two-stage bidding process, comprising a request for qualification (RfQ) and a request for proposal. Prior to the issuance of the RfQ, the procurers are required to incorporate two special purpose vehicles (SPVs): an operating SPV and an infrastructure SPV. All statutory clearances and approvals are to be obtained in the name of the operating SPV and the same are to be transferred to the successful developer after the bidding process is complete. Meanwhile, the land required for constructing the power stations will be held by the infrastructure SPV and be leased to the operating SPV by the procurers.

The revisions call for the pass-through of input cost variations to consumers. The escalation rate for variables will be notified by the Central Electricity Regulatory Commission every year.

Short-term power procurement is mostly undertaken for meeting specific energy requirements, such as in case of breakdown in the state plant and to meet peak load. Procurement is based on a short-term outlook (of up to one year). The demand and supply gap is met through bilateral agreements, the power exchanges, banking, etc. Power procurement for the short term is done as per the tariff-based bidding process notified on May 15, 2012. The exceptions are if power is to be procured for less than 15 days or if it is procured through the banking mechanism or power exchanges. The single stage process reduces time requirements and price bids for a single tariff at the delivery point.

The short-term power procurement market has limited depth, currently accounting for approximately 10 per cent of India’s total transacted energy (9 per cent in 2014-15). Typically, the highest volume for the short-term power market is transacted in the second quarter. The transacted volume has been constant in recent years due to reasons like transmission congestion and the poor financial health of utilities. The size of India’s short-term market was 98.99 BUs in 2014-15, about 5 per cent less than the volume of electricity transacted through the short-term market in 2013-14 (104.64 BUs). In 2014-15, 10 per cent of the electricity volume could not be cleared due to transmission congestion. While availability has improved significantly due to the commissioning of several generating stations, utilities have been resorting to power cuts. 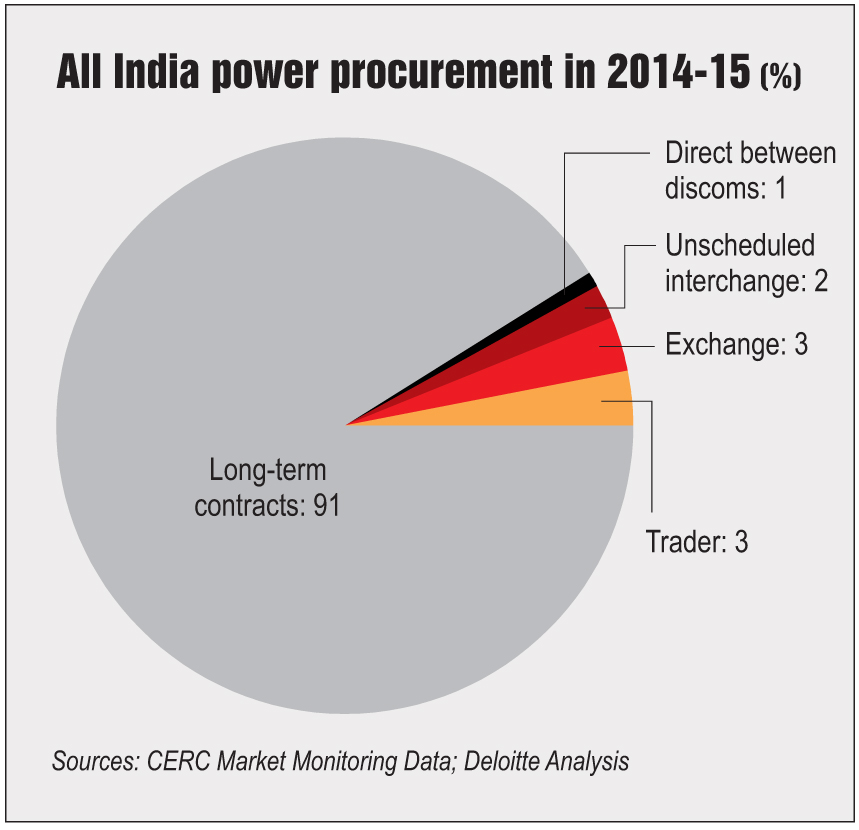 The short-term market’s prices have also remained unchanged, with small variations in the power exchange rates. The power exchange prices improved during 2014-15, primarily due to higher prices in the southern region as a result of the increased demand and congestion between the southern region and the rest of the regions. Meanwhile, the rise in the number of traders has increased competition and resulted in tariff reductions in the short-term energy traded.

The weighted average price of electricity transacted through the Indian Energy Exchange and Power Exchange India Limited during 2014-15 was Rs 3.50 per kWh as compared to Rs 4.29 per kWh in the previous fiscal. During September-November 2015, the weighted average sale prices of traded electricity were in the range of Rs 4.06 per kWh to Rs 4.74 per kWh, whereas they ranged between Rs 2.73 per kWh to Rs 3.65 kWh in the power exchange markets.

For reducing the average cost of power procurement, utilities need to focus on planning, with an emphasis on procuring competitive power.

Discoms in states like Delhi, Gujarat and Haryana have signed PPAs for meeting their peak demand. Apart from the fixed charges, they have to pay capacity charges for this quantum even in off-peak periods. So, for optimum utilisation, long-term PPAs should only be signed for meeting the base demand and the remaining electricity for peak demand and variations in forecast should be bought through power exchange markets.

The central government’s focus on the “Power for All” target in all states by 2019 will put more pressure on utilities to procure power on a long-term basis for bridging the demand-supply gap. The government’s efforts to improve the financial situation of discoms will also encourage power procurement. In addition, India has sufficient surplus capacity, which is expected to be commissioned in the near future and sold at competitive prices. n

With inputs from a presentation by Amit Goenka, Manager, Energy and Resources, Deloitte Touche Tohmatsu India, at a recent Power Line conference