The scenario continues to remain bleak for coal-based equipment manufacturers in India. In the past six months, only five major boiler, turbine and generator (BTG) equipment orders, aggregating 4,660 MW in capacity and Rs 143.06 billion in value, were placed by central and state sector generation companies. These include four orders placed with Bharat Heavy Electricals Limited (BHEL) and one with Toshiba JSW Power Systems Private Limited.

Despite the efforts of the government to review power purchase agreements (PPAs) and resolve fuel supply issues, the BTG and the balance of plant (BoP) markets have not recovered fully from the demand slump that started in 2011-12. Private sector generation companies continue to refrain from placing fresh orders due to the lack of demand for power from the cash-strapped discoms and an increasing focus on the renewable energy segment. Further, the progress of project development has been slow due to numerous challenges such as inadequacy of fuel and land, delays in obtaining clearances, and limited funding.

In addition to low demand, the margins and profitability of equipment manufacturers have been significantly impacted by intense competition, a shrinking order pipeline, and a sharp rise in material costs.

While the Make in India initiative created a positive sentiment for domestic manufacturing, order finalisations remained poor. The market scenario is not expected to turn around in the immediate term; however, manufacturers are hopeful that the recent policy interventions and announcement of new projects will revive demand in the medium to long term. 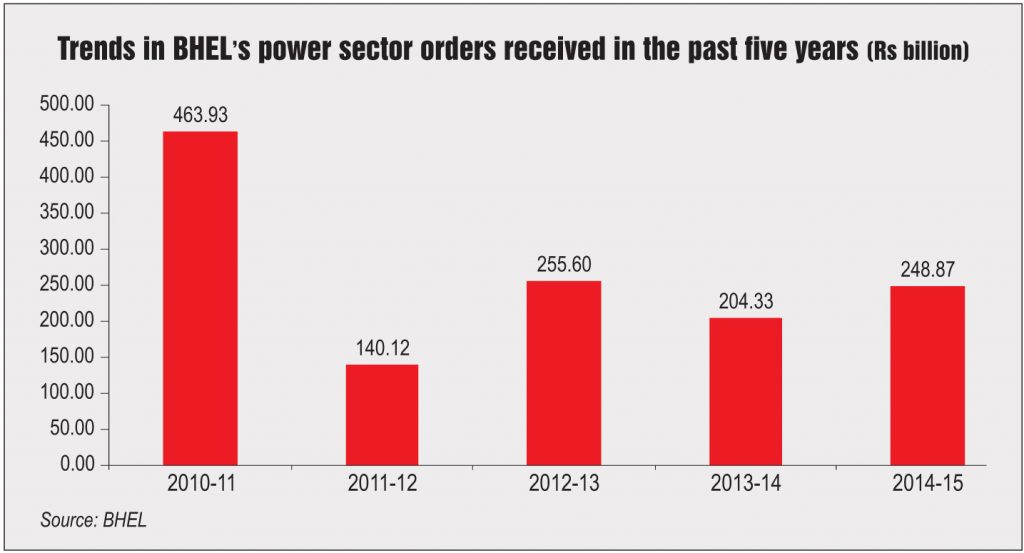 The BTG equipment manufacturing capacity in India remains highly underutilised. Against an aggregate annual manufacturing capacity of 30 GW to 35 GW, the average annual demand for BTG equipment has dropped to less than 10 GW. This represents a significant departure from the 2007-10 scenario, when the annual equipment awards stood at 25 GW-30 GW. The low level of ordering has resulted in a decline in production. As per the data available with the Central Statistical Organisation, the output of boilers in India fell by 3.1 per cent to Rs 67.2 billion during April-November 2015, while the production of turbines declined by a sharp 23.4 per cent.

BHEL, the market leader with an annual manufacturing capacity of 20 MW, has been witnessing a sharp reduction in order flows over the years. The company’s order flow from the power sector decreased from Rs 463.93 billion in 2010-11 to Rs 248.73 billion in 2014-15. This severely impacted BHEL’s financials, with its turnover declining from Rs 433.37 billion to Rs 309.47 billion. The situation remains unchanged in the current fiscal, with the company’s operational income decreasing to Rs 156.25 billion during March-December 2015 as compared to Rs 174.97 billion during March-December 2014.

The situation remains grim for private equipment manufacturers as well. Thermax-Babcox & Wilcox Energy Solutions Private Limited has not been able to get a single boiler order, despite its 3,000 MW manufacturing facility being ready for almost three years now. Similarly, other industry players like L&T-MHPS Boilers Private Limited, Alstom Bharat Forge Power Limited and Toshiba JSW have been struggling to improve their order accretion for the past three to four years. The only private equipment manufacturer to receive a major contract in the past six months is Toshiba JSW Power Systems Private Limited.

Similar to the BTG segment, the bottom lines of most major BoP players have been under pressure in recent years. Several players reported a decline in net profits for the first nine months of 2015-16, owing to a period of sluggish growth, which witnessed limited fresh order inflows. The only orders that were received by players came from public sector units. A slowdown in project execution has also resulted in working capital being blocked in projects, thereby impacting cashflows for BoP vendors. This has also resulted in a shortage of working capital for executing other projects as well as higher borrowings. An added challenge for BoP suppliers has been delayed payments, leading to low cashflows. At the same time, most orders that were in hand have either already been executed or are nearing completion. Hence, future projects and revenue visibility are poor.

Going forward, the demand for coal-based equipment is expected to improve in response to the various reforms initiated by the central government to revive investor interest. The industry hopes that the central government’s Ujwal Discom Assurance Yojana (UDAY), which is aimed at improving the financial condition of discoms, will have a positive impact. Other positives include the recent amendment to the National Tariff Policy, and the proposed amendment to the Electricity Act, 2003, and the proposed revision of the standard bidding documents for imported coal-based ultra mega power plants (UMPPs).

An upswing in the market is expected when new orders for projects planned to be executed during the Thirteenth Plan period (2017-22) come in. The generation capacity addition target for the plan period is around 100 GW. The equipment demand for the development of UMPPs of 4,000 MW each would further enhance the order flow during the Thirteenth Plan period. The government is likely to reinitiate the bidding process for the selection of developers for the Banka, Bedabahal and Cheyyur UMPPs by March 2016. Apart from new capacity addition, there are also opportunities for equipment suppliers in the renovation and modernisation business.

The industry expects that over the medium term (by 2017), the aggregate ordering will stay at 10-12 GW per annum; however, over the long term (beyond 2017), it will improve to 20-24 GW per annum. The overall expectation is that ordering will pick up in 2016-17. The Centre for Monitoring Indian Economy (CMIE) Private Limited expects that boilers worth Rs 155.3 billion will be produced in 2016-17, representing an annual growth of 11.3 per cent. The production value of turbines is also projected to rise by 9.9 per cent to Rs 38.1 billion during the year. CMIE further expects the output of boilers and turbines to grow by around 8 per cent each in 2017-18.

To conclude, the equipment market outlook remains subdued at present as new power projects are slow to come up. While a quick restoration is unlikely, the equipment market is likely to witness a slow-paced, but consistent recovery as sector growth picks up as a result of ongoing policy initiatives.