The central government recently concluded the sale of 5 per cent stake in NTPC Limited, garnering about Rs 50.3 billion from it. This was the second largest divestment in 2015-16 after the divestment in Indian Oil Corporation (IOC) in August 2015, from which the government raised Rs 93.7 billion. With the NTPC stake sale, it has raised about Rs 183.44 billion as divestment proceeds in 2015-16 till date. This is far short of the target of Rs 695 billion for the fiscal ending March 31, 2016.

NTPC’s rating remained unchanged following the stake sale. As per Moody’s Investors Service, “The Government of India’s sale of its 5 per cent stake in NTPC (Baa3 positive) has no impact on the company’s ratings. After the sale, the government will continue to hold a majority stake of 69.96 per cent in NTPC. NTPC’s ratings remain supported by its strategic importance to the Indian economy, given its position as India’s largest power generation company.”

The share sale was carried out through the offer for sale (OFS) route as per the Securities and Exchange Board of India’s revised guidelines. Under these, only non-retail investors are allowed to place their bids on the first day of the issue (T day). They could bid for the unreserved portion of shares, which amounted to 80 per cent of the entire issue.

Retail investors (those who placed bids for shares of a total value of not more than Rs 200,000) placed their bids on the next day (T+1) for the portion of shares reserved for them, which amounted to 20 per cent of the total stake on sale. Retail investors also had the option of placing a price bid or opting to bid at the cut-off price. This was done to give them the benefit of discovering the cut-off price on T day so that they could bid in a more informed manner the next day. The unsubscribed portion of the shares reserved for retail investors is allocated to non-retail bidders on T+1 day at a price equal to the cut-off price or higher, as per the bids. Non-retail bidders can indicate their willingness to carry forward their bids to T+1 day.

The OFS received a fair response from institutional investors, but the participation of retail investors remained lukewarm despite a 5 per cent discount on the cut-off price. The 330 million shares earmarked for institutional investors were oversubscribed by 1.8 times on the first day and 2.5 times the next day. Meanwhile, the 82.4 million shares reserved for retail investors registered a subscription of 44.11 per cent, with the retail portion receiving only 36.4 million bids. As per analysts, a reduction in NTPC’s share price along with a weak stock market just before the announcement of the Union Budget 2016-17 had an adverse effect on retail participation.

Meanwhile, in the non-retail segment, the Life Insurance Corporation of India (LIC) bought about 60 per cent of the shares on offer, thereby increasing its stake in the company to 12.98 per cent from 10.03 per cent. LIC has lately become a rescuer in the government’s divestment programme. It also bought almost 90 per cent of IOC’s shares on offer this fiscal. The other highlight of the NTPC issue was the strong response from foreign institutional investors, who put in bids worth Rs 9.25 billion. 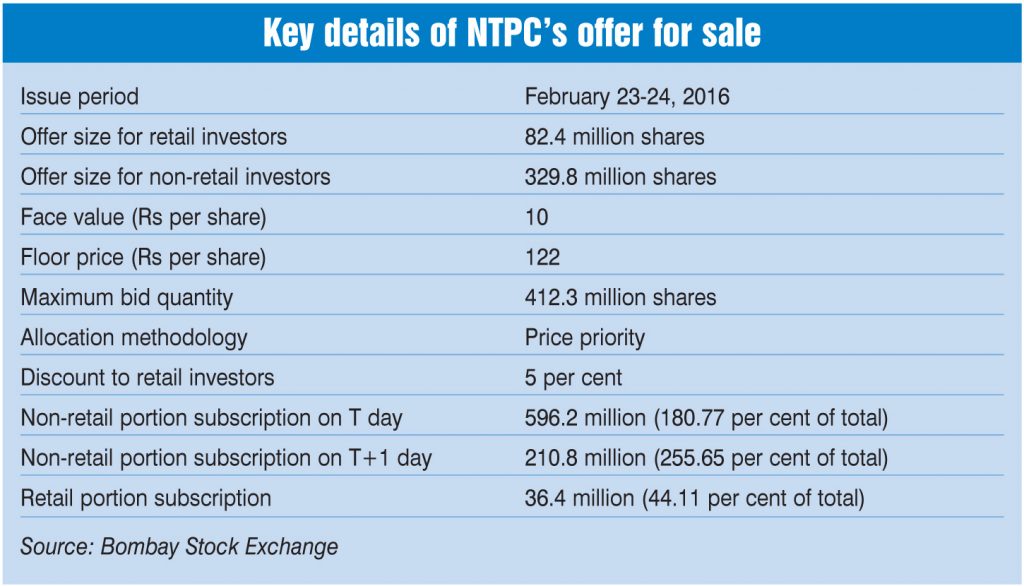 NTPC has strong credentials as India’s largest generator, accounting for over 15 per cent of the total generation capacity. It has also been registering an impressive financial performance over the years, making it a safe bet for investors.