The government has set an ambitious target of increasing the country’s installed renewable generation capacity to 175 GW by 2022 from around 38 GW at present. Of the targeted capacity, 100 GW would be solar and 60 GW would be wind. However, the intermittency associated with solar and wind power is a key operational challenge for grid integration. The variable nature of these power generation sources affects the load generation balance, causes varying demand for reactive power and impacts voltage stability.

The variability issues associated with wind and solar are particularly troublesome when combined with ageing energy grids, which are unable to cope with such fluctuations. In this context, deploying a wind-solar hybrid system and introducing more efficient storage systems could help in dealing with the increasing share of wind and solar in the total installed capacity.

Such hybrid systems are stand-alone energy sources, which are both dependable and consistent. They allow for better utilisation of land around an existing wind turbine and optimise the usage of the existing transmission infrastructure. Further, wind and solar energy have a complementary generation pattern. While solar energy peaks during the daytime, wind energy output is the highest during late evening and at night. Thus, a combination of the two can result in a much higher capacity utilisation factor.

Power Line presents an overview of the different technology concepts of wind-solar hybrid, implementation in India, key challenges and the way ahead…

An ideal wind-solar hybrid system is one that generates electrical energy by using an optimal combination of wind turbines and solar photovoltaic (PV) panels, along with shared infrastructure that allows for greater economic and social utilisation of both the resources. Primarily, there are three types of wind-solar hybrids – small-scale hybrids, co-located hybrids and true hybrids.

A co-located hybrid comprises two independent generating systems located in close proximity to each other. This allows them to share large transmission equipment such as a common substation and grid infrastructure.

Meanwhile, in a true hybrid system, the two technologies, wind and solar, work in tandem and use common components to produce a single electricity output more efficiently. In such systems, the output of the entire network is capped at the rated output of the bigger system.

In July 2015, Indian wind turbine manufacturer ReGen Powertech ventured into the wind-solar hybrid space with a solar-wind hybrid solution, along with engineering, procurement and construction services. The company has set up a 200 kW solar power project connected to its own 1.5 MW wind turbine in Vagarai, Tamil Nadu, an example of a true wind-solar hybrid project. It is the first of its kind in the country to be accorded in-principle approval by the state authority. Moreover, it is among the first projects in India that can operate at 1,500 V direct current (DC), at the PV system level.

The plant load factor of the hybrid project is around 37 per cent while that of the stand-alone wind turbine is around 28 per cent. The hybrid has an advanced gearless turbine, which deploys a three-step AC-DC-AC conversion, thereby allowing the integration of additional DC voltage into the system. It has the potential of adding up to 1,000 kW of solar power for every 1.5 MW turbine in existing and new projects. Further, the supervisory control and data acquisition system integrates both the wind and solar parks and provides a high level of sophistication for control and monitoring of the combined system.

In another key development in the past year, US-based renewable energy technology company WindStream Technologies launched its trademark product, SolarMill, in India. The prototype of this device, which is designed to work in both on-grid and off-grid environments, consists of three vertical axis wind turbines fixed beneath one or more PV panels to produce 2.5 kW of power. The turbines require a minimum speed of 2 metres per second for generation. According to the company, it is the first fully integrated hybrid renewable energy device, and its other features are low cost per installed watt (35 square feet for 1 kW), flexibility between the battery and the inverter, and an easy plug-and-play facility to attach the two devices. The product is being manufactured at the company’s facility in Maheswaram.

The government is also keen to develop MW-scale wind-solar hybrids in the country and is working to formalise the concept through a policy framework.

The foremost challenge is the absence of policies and regulations pertaining to hybrid systems in India. While there are different promotional policies in place for various renewable energy technologies across states, there is no specific policy or regulation for wind-solar hybrids. There is also ambiguity about what regulatory approvals need to be obtained for setting up such projects.

Determination of tariff is also an issue – whether a combined tariff should be considered or separate metering should be used. The acceptance of DC metering by state utilities is necessary to bifurcate the power generated by wind and solar so that their respective tariffs can be awarded; however, DC metering is a fairly new concept in the renewable energy segment. 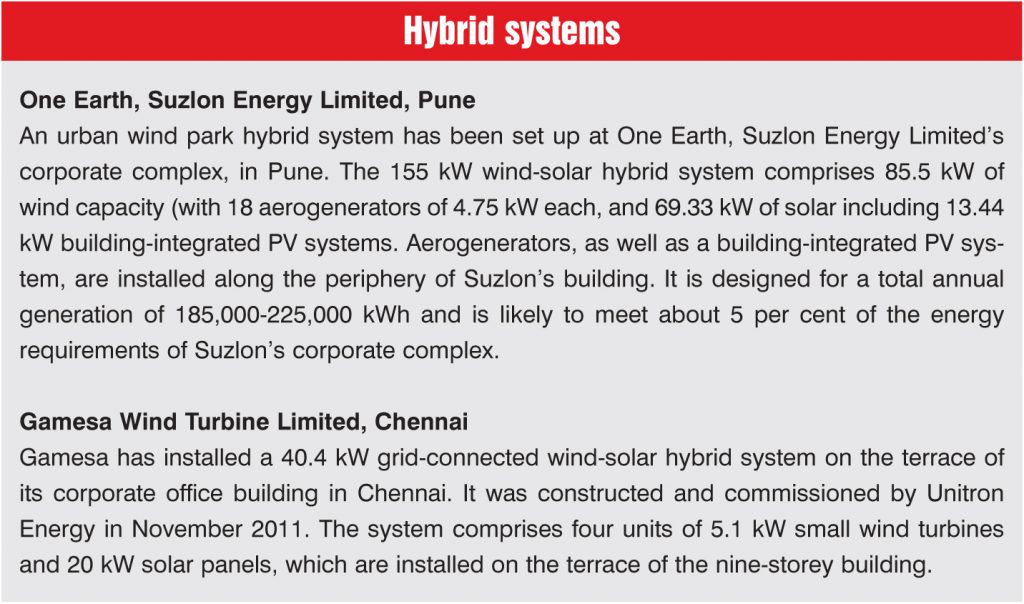 Also, there is a lack of clarity on whether fiscal incentives and accelerated depreciation benefits will be extended to wind-solar hybrid projects and whether these projects will fulfil the  renewable purchase obligation of the power purchaser.

Various current stand-alone sites of wind and solar can be easily converted in a brownfield manner to wind-solar hybrid parks. However, deciding the fate of the already signed power purchase agreements of such projects will pose a major challenge.

Moreover, achieving financial closure for such projects is a challenge, as banks are reluctant to extend loans to them given that they are based on relatively new technology.

With the industry coming forward to provide economical and effective solutions, it is essential for policymakers and regulators to create a favourable environment for the promotion of wind-solar hybrid projects. They need to build awareness and work out the investments required for evacuation and substation infrastructure. Finally, they need to define tariffs, net metering regulations and other guidelines to bring utilities on board to buy hybrid power.

In sum, India offers significant potential for wind-solar hybrids. These projects, in conjunction with better battery storage, would be ideal for stable and reliable provision of electricity, especially in remote regions that are not connected to the grid.

With inputs from a presentation by Archit Khemka, Head, Solar, ReGen Powertech, at a recent Power Line conference